I’m glad that the powers-that-be at vapingdaily.com have been sending me a lot of pod mod systems since they are among my favorite devices not only to review but to use as well. The latest is the Envii FITT, which is a closed system, but apparently, there are some vendor websites that sell the FITT as an open system pod mod.

The version I got is the same one that the venvii.com website sells, which comes with four different pre-filled cartridges that all share a similar flavor profile. I got the Cream Starter Kit, but there are three other flavors, which are the Menthol Starter kit, the Fruit Starter kit, and the Tobacco Starter kit. (Correction: Envii does, in fact, sell a separate kit with one empty, refillable cartridge).

So, I’m not sure if the FITT is an open or closed system, it seems that it’s both. But I was grateful for the Cream Starter kit since none of those other flavor profiles appealed to me. So, just looking at the mod reminded me a lot of the last “vape kit” I reviewed, the Kimsun Smart 4R with its oval-shape and stout build.

And also like the Kimsun Smart 4R, the FITT features a removable front panel that lets you access the cartridge port where you slip in your pre-filled pod. There’s a separate rubber mouthpiece that you use to keep the pod in place and attach it to the rest of the device.

Your Envii FITT Pod Mod System will include the following:

The Envii FITT, much like the Kimsun Smart 4R, is about as big as a newborn kitten. It fits with ease into the center of your hand and demonstrates no real problems with portability or transport.

It even features a tiny hole at the bottom so that it can snap onto a keychain or lanyard (although, I personally would not be caught dead with any pod mod, or any kind of vape device attached with a lanyard or keychain).

The FITT comes apart in the center, where the pod cover door meets the battery chassis. It’s just a simple matter of pulling the two apart to access the pod cartridge. You can open the pod cover by either removing it from the center or using the mouthpiece to reveal the canister inside.

The FITT comes in an all-black, or a half-black, half-white version and physically-speaking, the FITT is nothing but well-designed and thought out. Dividing the pod mod into two sections was an especially new departure from the typical pod mod system featuring an elongated, rectangular tube system.

While the Juul and Phix were not especially hard to hold, and great to slip into your pocket, the FITT is much easier to hold in some respects given its rounder, wider shape. It not that thick either, so yet another plus in the portability department.

The top portion of the mod features the optional fire button. Only it’s not so optional since you still need to use it to switch between either the fire button mode or the draw-activated mode. On either side of the mod, there are dual LED lights.

The lights are not flashy (in an aesthetic sense, they do flash, functionally speaking) and do serve some discernable purpose in that they are indicator lights for your battery and for your charging status.

There’s not much else to the FITT. The USB charging port sits underneath the mod, and the pre-filled cartridges themselves are made of a frosted plastic, which felt durable and leak-proof, although I couldn’t see how with these cartridges you could refill them if you wanted to.

I think that the top cap could come off, and I tried but was met with some resistance, so I didn’t force the issue. But I did some research and found pictures on the Internet showing the bottom cap that keeps the coil and wicks in place is where you fill the non-prefilled cartridges.

Like with most pod mod systems, using the FITT couldn’t be simpler. As mentioned already, the two sections of the mod come apart to allow you to install a cartridge. There’s no OLED screen or adjustment buttons, and the built-in 650mAh takes about an hour to charge fully.

The kit comes with the instructions printed on the inside of the cover and tells you everything you need to know on how to operate the FITT. Five clicks of the firing button turn the device on or off, and I was a little disappointed when I found out that the FITT’s draw-activated option does not simply activate by drawing on the mouthpiece.

You just need to click the firing button two times to check your battery life, which will either flash green, yellow or red which mean respectively a full charge, halfway charged, and needs to be charged. Clicking the firing button four times will turn off the LED lights and put the device into stealth mode.

I got the Cream Starter kit, which comes with four separate, cream-themed, pun-infused flavors from different e-liquid manufacturers: Cannoli Be One, D’nish, Game Over, and The Milk.

There’s no real adjustments or boosts that you can give to your vape, so it’s just a matter of popping open your device, removing the top and bottom cap from the cartridge, installing it and then choosing either the button or puff mode and then, vaping.

I choose the button mode first and found that there was no real warm-up time to start vaping; the device fired almost immediately. The flavor was spot-on for my D’nish cartridge; sweet, creamy, and rich.

For a dedicated MTL device, you shouldn’t be expecting a whole lot of cloud when you’re vaping. And there weren’t many clouds to speak of, just your typical smoker’s cloud.

And I have to say, the 3.2ml e-juice capacity paired with the long-lasting 650mAh battery made for a more than delightful vaping experience. Unfortunately, and this is a real deal killer, the pods once installed, do leak quite a lot.

There are two connector pins on the bottom of the device that pierces the cartridge to vape the juice, and this results in the cartridge having two holes at the bottom whenever you want to switch out the pods.

I would imagine that this would not be a problem with the empty cartridge version, which is a top-fill pod, although you still would have the two holes at the bottom. But then again, you would only be taking the pod out if you were already low on e-juice, and not switching out a half full e-juice pod.

The most obvious device to make a comparison to the Envii FITT would, of course, be the Kimsun Smart 4R which has a very similar build to the FITT and has almost the same user interface as the FITT.

Save for the fact that the FITT can also be used as a draw-activated device, the FITT, and the Smart 4R, both have firing buttons and LED indicator lights. Only, one advantage that the Smart 4R has over the FITT is its larger e-juice capacity at 4ml, so it’s not a sizable difference from the FITT’s 3.2ml capacity.

And I wasn’t sure how to classify the closed system of the FITT, with the open system of the Smart 4R. Which was better? This question was answered by the simple fact that Envii only sells the pre-filled cartridges with a high nicotine content at 18mg, and that’s it; there’s no nicotine-free option, which was a downer.

I don’t mind vaping with e-juices that have nicotine content, but 18mg is too high for me. Never being a smoker myself, I don’t miss nicotine nor do I need it; I can appreciate the slight buzz it gives you, but too much gives me a headache.

So for the mere fact of being an open system pod mod, I’ll have to go with the Kimsun Smart 4R, which lets you use the e-liquid of your choice. Although if someone can clear up the confusion over whether the FITT is a closed or open system, I might give it a second thought.

Its size is the FITT’s most obvious feature, as well as an advantage. The size of the FITT is something that cannot be overstated. And yet despite its small size, it still had a 650mAh battery and a 3.2ml e-juice capacity.

The two vaping modes were a knowing nod to two kinds of vapers. The button mode was sure to make the box mod vapers happy, and the draw-activated vapers were sure to appreciate the puff mode. I know I did.

Again, the Kimsun Smart 4R had a much larger battery capacity at 1100mAh, but I found I got at least two full days of vaping with the FITT, which was a certifiable plus for me.

Changing the pods was a sticky mess. And with pods filled with e-liquid that have a nicotine content of close to 18mg that’s not just sticky fingers to worry about.

I’m definitely a pod mod-er, more than anything else. Box mods have their own special charm, but I’m more of a no-fuss, no-mess, person and pod mods provide that convenience, on top of being super sleek and sexy.

“Sleek” and “sexy” wouldn’t be the words I would use to describe the Envii FITT. In terms, it reminded me a lot of the Penguin, the Batman villain, in that it’s short and stout, comes decked out in black and white. There is a limited edition version of the FITT that does come in verifiably sexy chameleon pink and green, but it’s a little overpriced if you ask me.

The FITT vaped wonderfully, but changing out the pods was a problem that I would have rather not have to have dealt with, especially since I like a pod mod to be an antidote to the filling and refilling of (sometimes) leaky box mods.

Overall though, I appreciated the FITT’s size, performance, and ease-of-use. The two vaping modes were also a great feature. 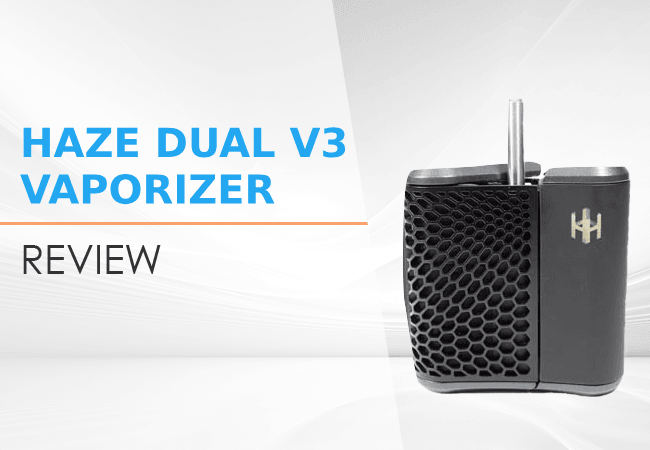 February 16, 2017
The Haze Dual V3 Vaporizer is the first ever portable vape designed with a dual chamber, making it the ultimate.