Vaping Laws: How Old Do You Need to Be to Vape 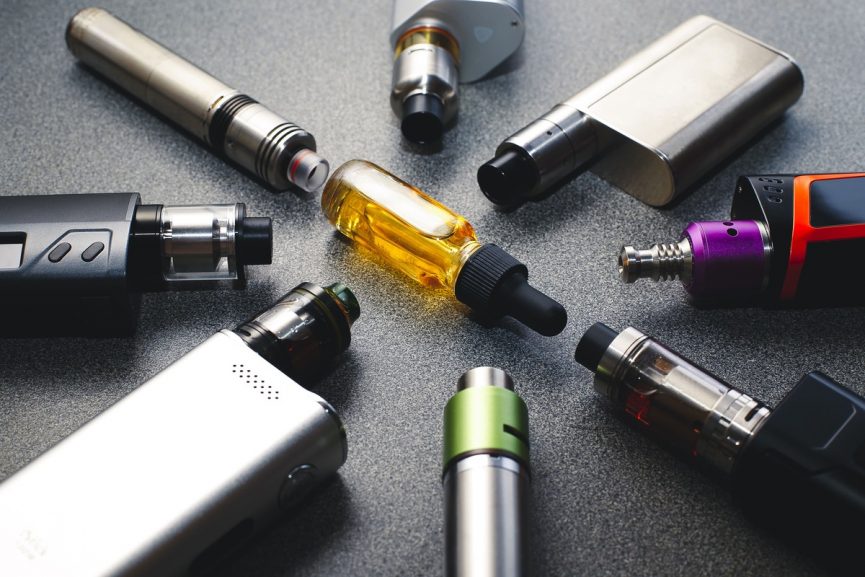 When it comes to vaping, all the states have their own age requirements. So how old do you have to be to buy a vape? According to Federal law, all fifty states have now imposed age restrictions on the purchase of e-cigarette products.

How Old Do You Have to Be to Vape

Along with age limits, several states have also instituted laws regarding the use, taxation, and sales of e-cigarettes:


How Old Do You Have to Be to Buy a Vape? 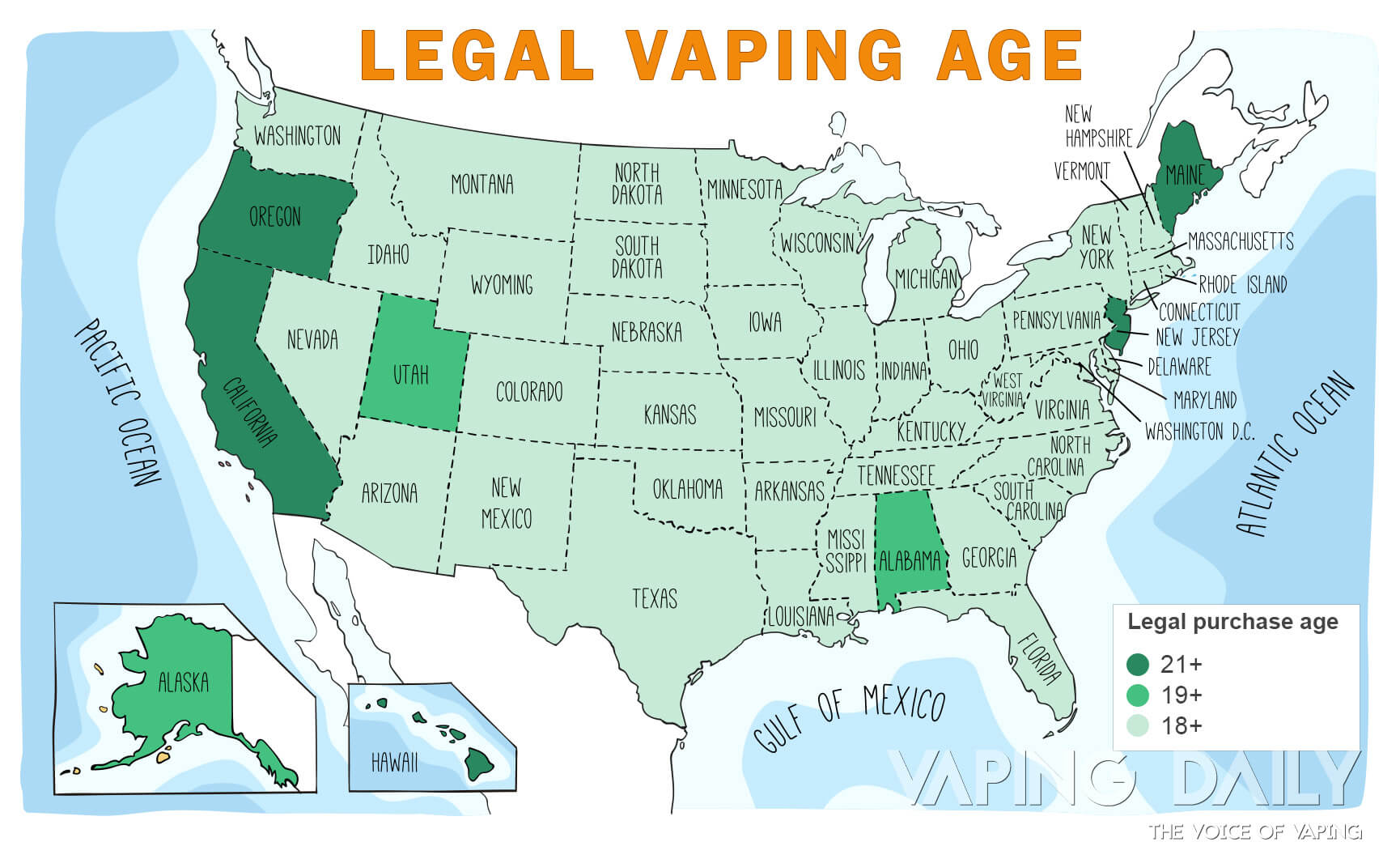 The exact age to legally purchase vapor products varies from state to state. Data compiled by the Public Health Law Center at Northeastern University provides a clearer picture of e-cigarette laws by state.

The change in tobacco purchasing laws in these states has also raised the legal age of vaping, given that e-cigarettes present a particularly vexing problem for lawmakers.

Public health officials, medical experts, and legislators are all of a different mind regarding the safety of e-cigarettes and even zero nicotine e-liquids. The lack of consensus on what e-cigarettes represent — an alternative to bad habits or public health disaster — has led to the uneven adoption of vaping laws.

While one side argues for the potential utility of e-cigarettes to help adult smokers, the other rails against the possibility of e-cigs addicting a new generation to nicotine.

Since chronic exposure to nicotine can have lasting effects on the brain, it stands to reason that young adults should avoid nicotine.

The gray area is whether the vaping age should only apply to nicotine-based vape juices and the aforementioned 0 nicotine ones should be allowed.

Even the imposition of age limits to buy e-cigarettes has divided many. Experts in the field have come out both for and against the age restrictions, further confounding what should (or should not) be done about e-cigarettes and what impact they have on society as a whole.

One thing is certain, if parents want their kids to not take up vaping, then parents that vape needs to stop or be more discreet about it. Kids will end up taking on their parents’ habits no matter what they are.

The Problem of E-Cigarettes

E-cigarettes were created for easier nicotine consumption and their use intended solely for adult smokers. But the technology has inadvertently drawn in an unexpected demographic.

According to the CDC, “e-cigarettes are the most commonly used tobacco product by American youth.”This trend has troubled many, given the addictiveness of nicotine and its potential to affect the development of the adolescent brain adversely.

Fears about teenage nicotine addiction have crystallized around one particular vaping device, the e-cigarette known as the Juul. The Juul is a portable, hand-held e-cigarette that vaporizes flavored e-liquid contained in “pods.”

For reasons as varied as its portability, attractiveness, and newness, the Juul has fast become a popular pastime among teenagers. Young people are “juuling” in school, at home, and on social media.

But, to the surprise of no one, many adolescent “juulers” are shockingly unaware of how much nicotine they are putting into their bodies. One Juul pod contains as much as 0.7 mL of liquid nicotine or the same amount as a pack of cigarettes.

Part of the issue is that young people take up vaping when they weren’t already smokers. Vaping for reasons other than a means to quit smoking can often lead people to take up cigarettes at a higher rate than people who didn’t start vaping first. This is especially true for teens.

Teenage ignorance about the health risks associated with vaping is why many parents, school officials, and medical experts feel the need to intervene.

They are lobbying state legislators to either increase the legal age to buy tobacco products (like the Juul) to twenty-one or enact even more stringent vaping regulations.

The imposition of these age limits is just one part of a broader pushback against e-cigarettes in general. The FDA, which up until 2016 did not even regulate vaping devices, has done their best to make up for a lost time.

This past April, the FDA took action against 40 retailers for violations relating to sales of the Juul to minors. In addition to the citation of retailers in violation of the law, the FDA vowed to take a tougher overall stance regarding sales of e-cigarettes to minors.

The blitz targeted online retailers, as well as brick-and-mortar vape shops. The FDA’s actions were a response to the public outcry over the ubiquitous use of the Juul by young people.

But, despite the regulatory agency adopting a stricter, zero-tolerance stance toward e-cigarette sales to minors, groups like the American Lung Association, the American Academy of Pediatrics, and the American Heart Association feel the FDA is not doing enough.

As a result, these and other public health groups are suing the FDA in federal court for allowing e-cigarette manufacturers like PAX Labs, makers of the Juul, more time to comply with upcoming regulations on e-cigarettes.

While FDA director Scott Gottlieb has not explicitly commented on the lawsuit, it puts him and his agency in an awkward position. In regulating e-cigarettes, the FDA must weigh the risks of teenage nicotine addiction, against the very real human toll cigarettes take every day.

David Levy, a professor of oncology, pointed out how tried-and-true tobacco control policies, like higher cigarette taxes and age restrictions, “need to be supplemented with policies that encourage substituting e-cigarettes for the far more deadly cigarettes.”

Dr. Michael Pesko, a researcher and assistant professor of public health policy at Weill Cornell Medical School, found an 11.7 percent increase in teen cigarette use in states where access to electronic nicotine delivery systems was restricted.

The findings of Dr. Pesko fly in the face of evidence uncovered by the director of the Center for Tobacco Research Control and Education at UCSF, Stanton Glantz.

Dr. Glantz’s research found teenage smoking stayed the same or was reduced in states where age restrictions were placed on the purchase of e-cigarettes.

Dr. Glantz is one of the most vocal advocates pushing for increasing the age limit to buy tobacco products to twenty-one. He was instrumental in getting the California legislature to change its tobacco-purchasing laws and he continues to lobby other states to do the same.

A Sheep in Wolf’s Clothing

Competing studies by respected authorities in their field but with two remarkably different outcomes: welcome to the world of scientific vaping studies.

Unlike with the existence of climate change or deadly diseases, scientists continue to debate whether or not vaping and e-cigarettes are a help or harmful.

a product that contains nicotine or tobacco or is derived from tobacco and is intended to be ingested or inhaled by or applied to the skin of an individual.

No one is arguing for teenage e-cigarette use. No nicotine use by young people would be ideal. But whether raising the age limit to purchase e-cigarettes is the answer to stop young people from smoking remains to be seen.

“cigarettes were a wolf in sheep’s clothing.” He believes the public’s perception of e-cigarettes as a new threat is wrong-headed,
“Now, with vaping, we have a sheep in wolf’s clothing, and we cannot get the wolf out of our minds.”

It all depends on where you want to buy the product. However, according to the NSW Public Health (Tobacco), it is illegal to buy vape liquids as well as non-nicotine and other e-cigarette accessories under 18 years of age.

The dab pen battery is considered a vaping device that contains marijuana compounds, as a result, you can buy a product if you have reached the age of 18 or 21, depending on the state.

0 comments on “Vaping Laws: How Old Do You Need to Be to Vape” 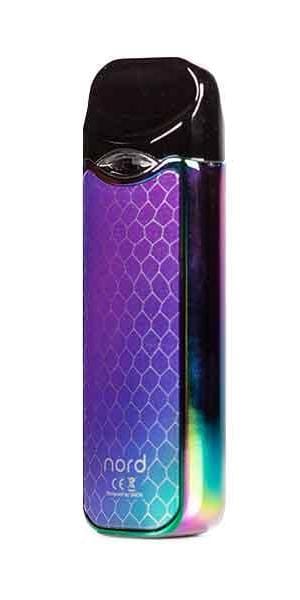