Remember when Uwell came out with their first sub-ohm tank, the Crown? It immediately shot the company up to become one of the most popular manufacturers of vaping products. However, when the Crown II came along, things started to get a bit messy for them. For some odd reason, the proprietary coil heads that came with the tank were a hit and miss affair. Sometimes, you would get coils that worked perfectly. However, then, the next pack would constantly have a burnt cotton taste. However, that little debacle about the premade coils did not faze the company in the slightest. In fact, they took this as an opportunity to launch the Uwell D2 RTA. It is the second version of their popular D1 RTA.

Looking at the D2, it looks exactly like the D1. However, this time you can unscrew the bottom of the tank to gain access to the build deck. Moreover, just like the D1, the D2 has a massive tank; it dwarfs all the other RTAs in comparison. However, is the D2 be enough to bring the spotlight back at Uwell, or will this just add more fuel to the fire?

The Look and Feel of the Uwell D2 RTA

As said earlier, the D2 looks identical to the D1 in every way. This is until you unscrew the bottom cover to expose the build deck section. Just like the D1, the D2 is one big honking RTA. At the base, the D2 measures 24.7mm in diameter. Also, from the base to the top of the drip tip, the height of this RTA is a whopping 70.3mm. This makes this (along with the D1) one of the tallest RTAs I have ever seen. However, as tall as this tank is, the inner tank could only hold 4ml. That is still a lot considering how small that tank looked. Alternatively, for a 70mm tall tank to hold just that amount of juice seems odd.

I have no complaints regarding the quality of the D2 as with all of Uwell’s atomizers. It is barring the Rafale and the Crown II tanks of course. The machining quality of the stainless steel parts of the RTA is quite impeccable. In fact, there are no sharp edges, and there are no burrs in the threads. Another thing that I really liked about the D2 is the matte finish on all their color options. The finish on the D2 has a really nice matte texture on it, in fact, it almost feels like it’s rubberized. What’s great is that even the stainless steel version of the D2 has the same matte finish. However, it is clear on the stainless.

The Build Deck of the Uwell D2 RTA

The build deck portion itself is nothing special. It is just a regular Velocity-style build deck with two posts that have two postholes each. The build deck itself is around 17mm wide, which is quite small considering the size of the atomizer. However, because a bulk of the D2’s total diameter is for the airflow, that is probably the biggest build deck Uwell could cram inside there. Regardless, 17mm still leaves you with plenty of room. This is if you want to build using thicker gauge wires and use larger inner diameters. I installed two six-wrapped fused Clapton coils using a 3mm guide and they fit perfectly.

From the top, the build deck looks just like any other. Conversely, if you look at the side then you will see just how intricately designed it really is. From the side, you will see that there are two “stages” on the D2 build deck. The top part is where the build posts are, in between the two decks is where the juice ports are. Then, the bottom deck is for the top-to-bottom airflow slots.

To some people, it might seem confusing at first. You can just think about it as a regular RTA with bottom airflow, but the AFC is actually at the top. To make things a bit easier to understand, you can take the outer glass tube out of the equation and vape it like that. In this case, the airflow will no longer be adjustable and will always be fully open.

My Vaping Experience with the Uwell D2 RTA

Building on a Velocity-style deck is always easy for someone who has been building coils for quite a while. However, even if you have no prior experience at building and installing coils, you will get the gist of it quite easily. I only have one gripe about the Uwell D2 RTA’s build deck. That is you have to remove the atomizer from your mod, unscrew the bottom cover. Then, you have to pull out the deck section, and then screw it back on your mod. This way, you can have a solid base to build on. And then you have to go through all of those steps (in reverse order of course) when you want to assemble the tank back together. In my opinion, it might have been better if the base cover and the build deck was press fitted together. 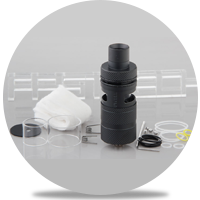 You have to be really careful when cleaning disassembling the Uwell D2 for cleaning. This is because it has a lot of parts. Starting from the top there’s the 510 drip tip, the top cap, the top chimney section. Then, you have the outer glass tank, the inner glass tank, the lower chimney section, the build deck, and the finally the bottom cover. There are a total of eight parts that you have to keep an eye out for when cleaning.

Even though accessing the build deck was quite a pain, it was all worth it. This is because of the quality of the vape I got from the Uwell D2 RTA. First of all, the airflow was nice and smooth and gives a nice, restrictive lung hit, which is more to my style of vaping. However, if you like really open airflow then the D2 may not be up your alley. In terms of flavor, the D2 performed excellently. The reduced chimney size and its conical top portion really helped concentrate the flavor. Furthermore, the with the airflow wide open I could produce thick clouds of vapor.

Pros and Cons of the Uwell D2 RTA

In my opinion, Uwell redeemed itself from the entire Rafale and Crown II issue when they released the D2. Although it is a bit too big for my tastes, it does perform quite well. The wide open top to bottom airflow system makes it ideal for blowing huge clouds of vapor. In addition, the reduced chimney chamber delivers great flavor. Also, its unique design makes it virtually impossible for the tank to leak.

Would I recommend that you try the Uwell D2 RTA? Yes, a thousand times yes. Are you sick and tired of wiping juice that leaked onto your tank and mod? Do you no longer want to go through the rituals that you have to do when filling up the tank (close the airflow and juice flow, etc.)? Then, the D2 RTA is the perfect choice.

Want to get your hands on the Uwell D2 RTA? And I highly recommend that you do, just follow the links provided to get the best deals for the RTA. 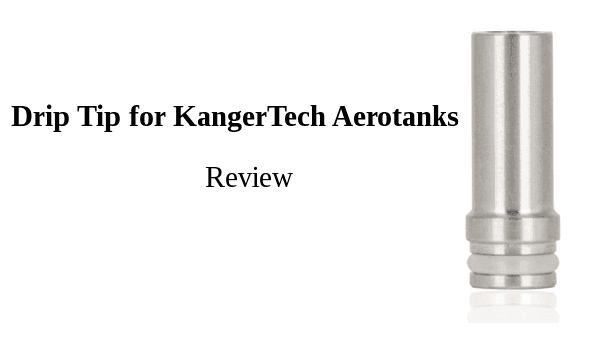 June 11, 2018
Looking for the best drip tip for Aerotanks? Read our review of the KangerTech drip tips and see how they rank!

May 19, 2017
Are you looking for a low profile atomizer that can create flavorful clouds? Then, the Wotofo Serpent Mini RTA is perfect for you. Read on to learn more.

May 17, 2017
Teslacigs, just like the scientist and their namesake, always finds ways to innovate. Is the Tesla Carrate 24 RTA the perfect example?