The Dose Pen by Dosist Review: It’s Good for You

Sometimes, it is hard to believe – marijuana is legal to cultivate, sell, purchase and use recreationally. Even just reading that sentence arouses confusion more than pure, unadulterated glee. Is weed legal? In the United States?

In 2020 the number of “green” states will increase, with states like Massachusetts and Maine eyeing legislation to legalize weed. In addition, marijuana use is becoming more normalized than ever.
The ambitious entrepreneurs have started creating and marketing new methods and products that go much further than just rolling up and smoking it.

One of these innovations has been the Dose Pen by Dosist. The remarkable vape pen that made Time magazine’s list of best inventions of 2016. It’s safe to say that if not legislatures around the country had relaxed marijuana laws, then something like the Dosist Pen would never have come into existence.

The Dose Pen comes in several formulations, each individually designed to treat or alleviate the symptoms associated with its particular strain. For example, the “sleep” strain of dose pens helps alleviate insomnia and restless sleep. The “passion” is aimed at spicing things up in the bedroom. And the “arouse” strain is supposed to reinvigorate you and leave you excited about life.

Vaping-wise, the Dose Pen works very much like a pod mod or a cig-a-like. Only there’s no pod or atomizer to attach, as the Dosist pen comes completely ready-to-use out of the package. It’s draw-activated and will last you for either 200 or 100 doses (or “puffs”).

The Dose Pen is currently only available for sale in certified dispensaries in the state of California. It is not sold online (this review necessitated a road trip to sunny California – sigh, sometimes I love my job).

I decided to go with the “bliss” strain of Dose Pens, which promises a “THC-forward formulation” with a 9:1 ratio of CBD and other terpenes. Terpenes are a new trend in all things marijuana. The more and more of the positive benefits of using weed vapes have become more well-known.

Terpenes are organic compounds that occur in many different plants, resins, and herbs. In a small part, they are mostly responsible for the strong, pungent odor of marijuana plants. According to various medical studies, they present medically soothing properties when combined with cannabinoids.

This new formulation of cannabinoids and terpenoids distinguishes the Dosist Pen. The vape goes far beyond just crystallized THC like waxes, CBD oil, or the standard dry herbs. Instead, these blended strains act to diminish THC’s psychoactive effect and promote its healthier properties. 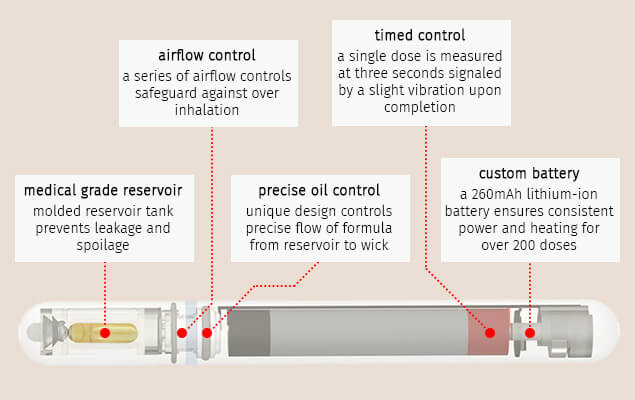 Physically speaking, the “pen” is quite similar to an actual pen. Apart from the proprietary magical elixir inside, the Dose Pen has many parts and components as other vaping devices. There are some circular airflow slots on either end of the device as well.

The Dosist pen feels made from high-grade plastic, but the reservoir inside is made of a food-grade material that is leak-proof. In addition, you have a small little viewing window cut into either side of the mouthpiece to check out your oil levels.

There are no buttons or lights anywhere to be found on the pen. Instead, inside the base of the rounded-on-both-ends pen is a tiny, 260mAh lithium-ion battery. It is draw-activated and works for a precise amount of time, which is the duration of each “dose” or puff.

Each dose is designed to deliver precisely 2.5 mg of THC. Once that amount has been reached, the battery triggers a vibration to tell users that the dose has finished.

The Dose Pen: Up Close

While other vaping devices like pod mods or cig-a-likes extol themselves as coming ready to vape, there are still a few necessary steps you have to take before you start vaping. There is no such setup time with the Dosist Pen.

It is supposed to be a device anyone can use, not just vapers of THC or e-juice. So all you have to do to start vaping with the Dose Pen is just to put it to your lips start inhaling. Your inhales, as I mentioned, measured out in timed doses of 2.25mg.

The device stops working after three seconds or when you feel the pen vibrate. Dosist recommends only taking three hits or doses every hour, but I imagine not everyone will be sticking to that three-hit/hour limit.

Vaping With the Dose Pen by Dosist

I vaped with the Dose Pen for about two weeks (with a $100 price tag, you don’t want to plow through this in one day). But, I mean, what do you like with a device like this? It’s not exactly supposed to appeal to hardcore vaping tech-heads, even though it is quite a technological marvel.

But, it’s a technology that’s divorced from the user since you have no role in adjusting or customizing it since all you have to do is start taking draws. Nevertheless, the dose pen wins points for being the most comfortable device anyone could ever use.

With a minuscule battery inside, you’re not assured many clouds, even though you do get a slight mouth-to-lung vapor trail. So I wasn’t expecting to detect any flavor profiles, but I did note some rich, piney flavors in my cloud.

Now, regarding effects, there were some. The “bliss” strain promises a THC-dominant liquid, with nearly 88% of the oil comprised THC, but I wasn’t put into a coma.

I did go against the recommended dosages and took a few more hits above the three-hit recommended maximum, and I found it was a somewhat mellow trip. I was lightly spaced while not exactly busting out of the bounds of gravity.

All you need to do with the Dosist Pen is open the packaging and start inhaling. There are no buttons, screens, or detachable parts.

Neither vapers nor weed enthusiasts are too crazy about being limited in their choices. Having a three-second cutoff may not excite many people, and I didn’t like that I had such a small window to receive my dose.

A lot was made about the fact that the Dose Pen made the list of top inventions in 2017. However, its uniqueness is not in dispute because the Dose Pen took the design of early e-cigs and cig-a-likes and made them completely hassle-free.

At $100 a pop, the Dosist Pen is a very expensive piece of hardware. Whether it is worth it or not, I would say that once you’ve gotten past the novelty of the pen, it’s not worth coming back for a second taste.

The pen was not merely technologically advanced, but it could also deliver a quality vaping experience.

On a technological level, the Dose Pen is quite astounding. The Dosist Pen is perhaps the most advanced feat of this new weed age. But in trying to normalize weed and weed use, the Dosist took it a little too far on the medicinal tip. I wholeheartedly support medical marijuana use, but treating weed as medicine, like the Dose Pen does, takes a bit of the fun out of it.

Of course, the Dose Pen is ideally suited for all kinds of wellness purposes. I could see a never-smoker turning to the pen for various reasons. And not feeling intimidated or ashamed to use it since it comes in such a non-threatening package.

The antiseptic, colorless package of the Dosist Pen didn’t appeal to me. However, it was interesting to try it out and have a reason to take a weekend trip to California.

12 comments on “The Dose Pen by Dosist Review: It’s Good for You”