So now we’re not getting the bottom of the barrel from SMOKTech. Just finished wrapping up the review of the SMOK Veneno (which means “poison” in Spanish, by the by) and I filled that review with my recriminations against the existential crisis the SMOK Veneno had since it didn’t really know what it was about.

The Stick Prince does not have that problem. It is a part of that royal SMOK family that also includes the Cloud Beast King tank and coil system.

But instead of working in conjunction with a box mod, the clever devils at SMOKTech have paired the TFV12’s fantastic performance with a 3000mAh battery in a vape pen form. Now, this is something I can write about.

I remember reviewing the SMOK AIO Stick a while back, and it was an impressive device with a never-ending suite of features. Most of those exciting features have now been taken over by the TFV12 tank like airflow control and the tank capacity.

And keeping in line with the simplicity of the SMOK AIO Stick, the SMOK Stick Prince has only one button and no OLED screen to read out or display information. It works much like a vape pen would but with the TFV12 and its quadruple coils striding atop it, the SMOK Stick Price is most assuredly a cloud-chucker. 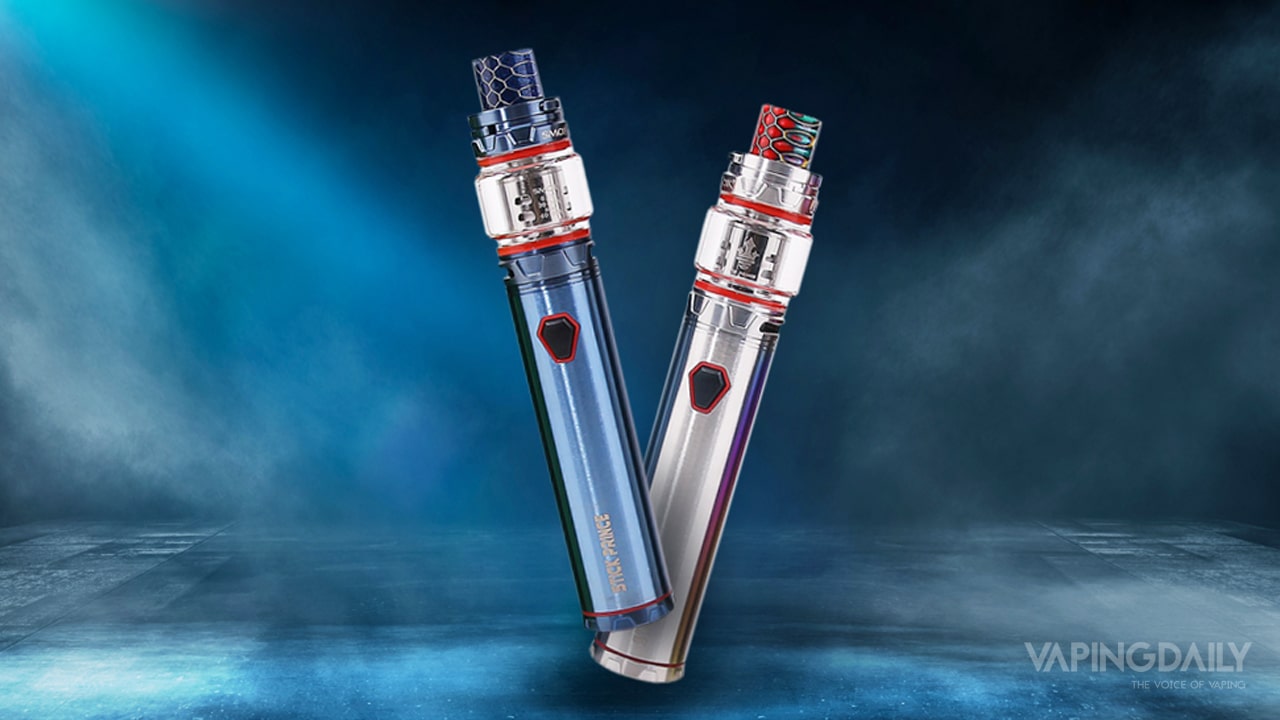 Taking a Look at the SMOK Stick Prince

They say heavy is the head that wears the crown, and at 3000mAh the SMOK Stick Prince battery is kinda hefty. The battery is built-in, and it is all battery covered by a stainless steel finish and comes in at almost 90g in weight.

There is one hexagonally-shaped firing/power button near the top of the battery. The button has an LED indicator light that surrounds it and also acts as your battery level indicator when it begins to flash red. The LED light has many functions that we’ll get to later.

The battery base has a few raises and depressions carved into it, which I guess supposed to be the aesthetic addition to the SMOK Stick Prince, although they don’t add much to the overall design. The dimensions of the SMOK Stick Prince put it at the height and width of most standard box mods, at 88mm high and 25mm wide. 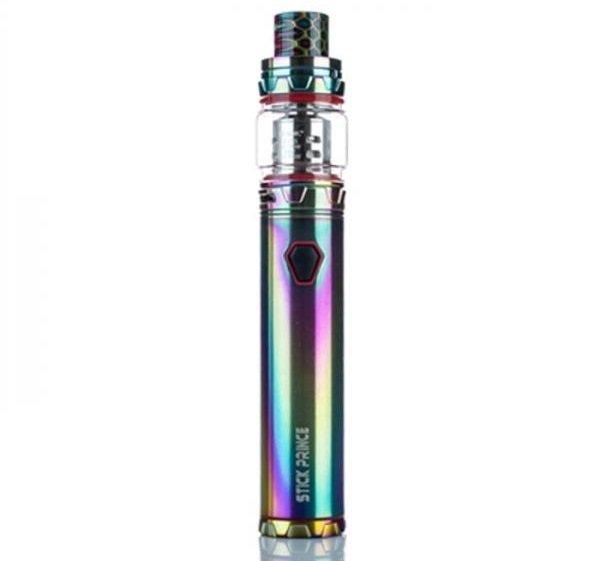 Another great feature that the SMOK team decided to include with the SMOK Stick Prince is the bubble tank, which had to be bought separately with the SMOK Veneno but comes standard with the TFV12 Prince tank in this kit and increases your e-juice capacity to 8ml. There is a USB charging port on the right side of the firing button, and thanks to the Prince’s airflow vents there are no airflow vents anywhere else on the battery.

Getting to Know the Device

A vape pen is the definition of simplicity (pod mods too). There are not many adjustable features, and unlike with dry herb and wax vaporizers, there are no other temperature settings on the SMOK Stick Prince.

To use the SMOK Stick Prince, you attach the TFV12 Prince tank to the battery, fill your tank with e-juice, let it saturate for a few minutes. Then you turn the device on by clicking the firing button five times, which will then turn on the LED indicator lights.

The lights will flash for a specific amount of time, fifteen times if the battery is running low, for example, to indicate battery level. The LED light also flashes whenever you take a vape.

That’s it for what the battery can do; the rest is done by the TFV12 Prince tank and the octuple coils inside the M4, which we will be taking a look at in the next section.

The Test Vape with the SMOK Stick Prince

I have used the TFV12 Prince tank with many other SMOK devices, but also alone with different high-powered devices. This is, however, the first time I’m using the M4 coils that vape best between 30W-70W.

I filled my tank up with some Appleicious from 180 Smoke and screwed together the TFV12 and the 3000mAh battery. I clicked the firing button fives times, and the LED indicator light started flashing.

I pressed and inhaled. The device fired close to instantly and only after a few sub-par vapes; I started feeling more and more taste and the clouds got steadily thicker and bigger as well.

I realized that the SMOK Stick Prince works mainly like a mech mod with the battery and coil working together to vape the e-juice and also not to destroy each other through any disparities in power or coil resistance.

The Vape Pen Plus has its 4ml tank integrated into the battery itself, so there’s no unscrewing or screwing on of a tank, which makes it easier to clean and replace broken parts. The SMOK Stick Prince can be used with a variety of different tanks and coils that can handle at least 4V of power and holds double the amount of e-juice as the Vape Pen Plus.

I thought the pairing of the TFV12 Prince tank with a vape pen battery was a brilliant idea. The designers at SMOKTech must have thought “we have all these great tanks, why not attach one to a vape pen?”, and the answer to that question is the excellent SMOK Stick Prince.

I know it doesn’t make much sense to criticize a vape pen for not having adjustable features, but some of them do have them, like adjustable temperature and voltage settings, so don’t tell me it’s not possible.

There’s not much more you could ask from a tank and coil combination as you have with the TFV12 Prince and the M4 coils. The right amount of power went through the coils, and the resultant clouds were majestic and savory.

Despite the inspired pairing of a 3000mAh battery with the TFV12 Prince, should you feel the need for a lower voltage vape the SMOK Stick Prince can accommodate you with its 510 connector.

I was a little surprised by the boldness of the SMOK Stick Prince; it was something I wasn’t expecting at all. But, when you see it, it makes perfect sense to marry a great-performing tank and coil option like the TFV12 with a powerful, long-lasting, and one-button battery.

The result is somewhat surprising. It doesn’t come that well together, aesthetically speaking. The addition of the bubble tank makes the Prince bulge out a little, but it didn’t distract too much. It had the same appearance as other top-heavy vape pens.

But when it came down to cloud production and quality, the SMOK Stick Prince did not disappoint. It worked beautifully and left a lasting impression.

56 comments on “SMOK Stick Prince Review: Nothing Compares 2 It”