The words “hand cannon” are usually applied to large, Dirty Harry-style firearms. But I don’t think there would be any problem with referring to the Smok Stick One AIO as a hand cannon, even though the actual size of the device is not exactly similar to a .357 Magnum.

I found you could easily wrap your fingers around it but, I wouldn’t classify it as a discrete, put-it-in-your-pocket vape pen (even though that’s how it’s advertised). Maybe if you’re rocking cargo pants all the time, the Smok Stick AIO would be a good pocket rocket, but if you’re not, I think there are a lot of other vape pens that would be better classified as pocket devices.

So, putting aside size, it is intended to be a starter kit. It features simple one-button operation, a top-fill, built-in tank and a long-lasting 1600 mAh battery that guarantees solid performance for at least a full day.

The Smok Stick comes in a nondescript box that just flips open, so nothing fancy or worthwhile about that. Box contents and a product description are written on the back, and there’s also an authenticity seal you can scratch.

When you open up the box, here’s what’s inside:

I may have overreacted to the Smok Stick AIO One’s bulk; just a little bit. It’s only 22 mm in diameter and 115 mm tall, so the Eiffel Tower it ain’t. That’s more a personal bias of mine.

I’m a fan of the slim, stylish vape pens, so a hulking device with a massive battery inside really isn’t my thing. Nevertheless, duty calls. I was immediately drawn to the ease with which the Smok Stick operates since SmokTech has another line of box mods for the super-advanced vaper that mere mortals would never dare try.

The most work you have to do with the Smok Stick AIO is screw off the drip tip to install your coil. But other than that, you just charge it, fill it up and start vaping.

The Smok Stick AIO comes in four different colors. The iridescent and copper colored ones seemed garish to me. So, personally, I would either go with the simple stainless steel or black ones.

The “AIO” refers to “all-in-one” so, on the plus side, there’s minimal assembly required. But if you’re interested in doing some mods to the unit, then this is not the device for you since, other than the drip tip and the coils, there are no other parts you can swap out.

Also a downer: once the battery or device itself is damaged then it is, to put it bluntly, kaput, since there’s no access or way to remove them.

Some of the reasons to get the AIO:

Yes, I was a little too judgemental about the Smok Stick AIO’s figure before. But, I forgot what all that extra weight the Smok Stick is packing is for: beautiful, bountiful, bodacious clouds.

Thanks to the micro USB cable, I was able to charge the Smok Stick AIO while I was writing another review. When it was finally charged (the center indicator light will turn off when fully charged) I just unplugged it, slid off the drip tip and let my juices flow.

Remember that the e-juice goes into the side, bean-shaped opening, rather than the central airflow valve (best remember that).

The coil features organic cotton wicks and four air-flow holes on each side. The wattage is written right there on the coil (25-45 watts), and it is also not adjustable.

It’s always good to let your juices soak as long you can (or want to) to let the wicks absorb every last morsel of flavor. But I didn’t do that.

Notwithstanding, I was still impressed by the flavors I tasted in my first few draws. I used Kickstart My Tart from Vape Wild, which is a great 65/35 VG/PG mix that strikes a nice balance between sweet and just a little bit of tartness. Higher VG content also pairs well with the 0.25-ohm resistance coil.

I hit the Smok Stick AIO a decent dozen times and didn’t notice much flavor depletion after each successive hit. The slight slit that sits between the battery and mouthpiece is the airflow (not adjustable) valve, and there’s also a tiny, little, dot of a hole on the bottom end of the battery, which lets the battery ventilate, so the battery didn’t get too hot to hold.

Putting It All Together

Regarding upkeep, there isn’t much to do with the Smok Stick AIO. The vertical airflow promises a leak-free tank, but there’s always a little juice that either gets away from you or just builds up with use.

Other than removing the top cap and running it through some water (after you remove the coil, of course) you might want to put something absorbent into the top cap just to clean up any excess juice.

Installing the coil wasn’t that hard. At first, I thought that the o-ring underneath the top cap was coming loose. And as hard as I tried I couldn’t get it straightened, but when I said “to hell with it” and just screwed it in, everything went fine. The coil lined up perfectly with the threads, and there was no air escaping.

If you want a one-way ticket to flavor country, then the Smok Stick AIO is the best way to get there. I thought there was good cloud production, but compared to some of Smok’s other box mods or the Smok Stick V8 Baby which has replaceable components and adjustable airflow settings, the Smok Stick AIO is more middle of the road, when it comes to cloud chasing.

Bring It on Home – Likes and Dislikes

Although the Smok Stick AIO is marketed as a starter kit, it probably won’t sit well with new vapers since the direct-to-lung hits might be a little overwhelming. The Smok Stick AIO might suit the intermediate level of vapers, who aren’t so fluent in vaping but can still hold their own against mighty cloud production. 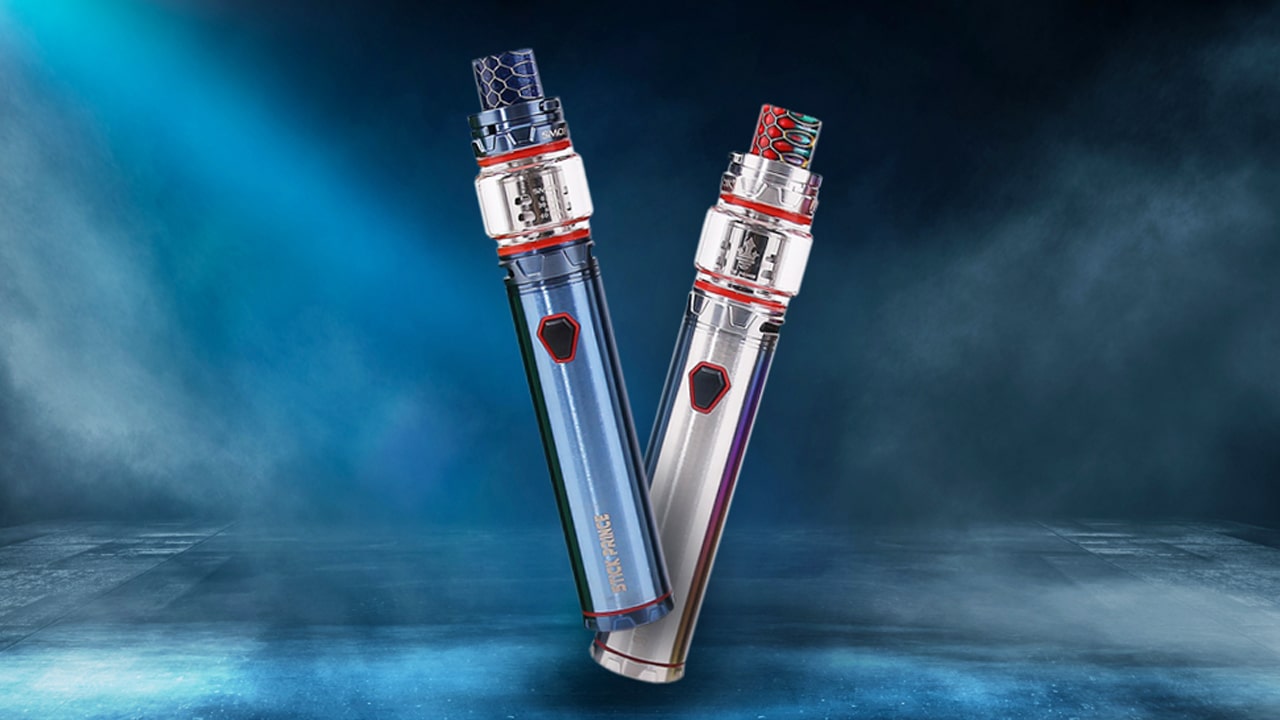 December 18, 2017
The SMOK Stick Prince is designed to blow away competitors with its 3000 mAh battery and its big belly bubble tank. Read our review here.

May 23, 2017
It's a quality vape at half the price. Is Smok eGo Cloud Starter Kit, the entry level sub-ohm pen we've been waiting for? Will it meet our needs? Read on.