Consider the 20700 and 21700 revolution underway. These more substantial dynamos have taken the vaping world by storm with promises of higher battery capacity, a longer-lasting battery life and the ability to power high-wattage devices with only one cell, although the iJoy Captain X3 took three 20700 batteries.

The iJoy Capo 100W mod (the starter kit comes with the Captain Mini sub-ohm tank) takes a single 21700 battery with a capacity of 3750 mAh to get the mod to its ideal power output of 100W. I can already tell that those two elements combined (the 21700 battery and the 100W limit) are the ideal for someone like me who doesn’t enjoy vaping at high wattages that much.

Besides the battery and power output, other elements took the iJoy Capo to the very top of the list of best new box mods. The Capo has a top-loading battery slot, with a finely embossed and threaded top cap.

The Captain sub-ohm tank also seems to be the ideal choice to match with this mod and the coils included in the kit also sync up perfectly with the mod’s maximum power output. Everything about this box mod starter kit seems to be right on point regarding performance, capability, and stylishness. 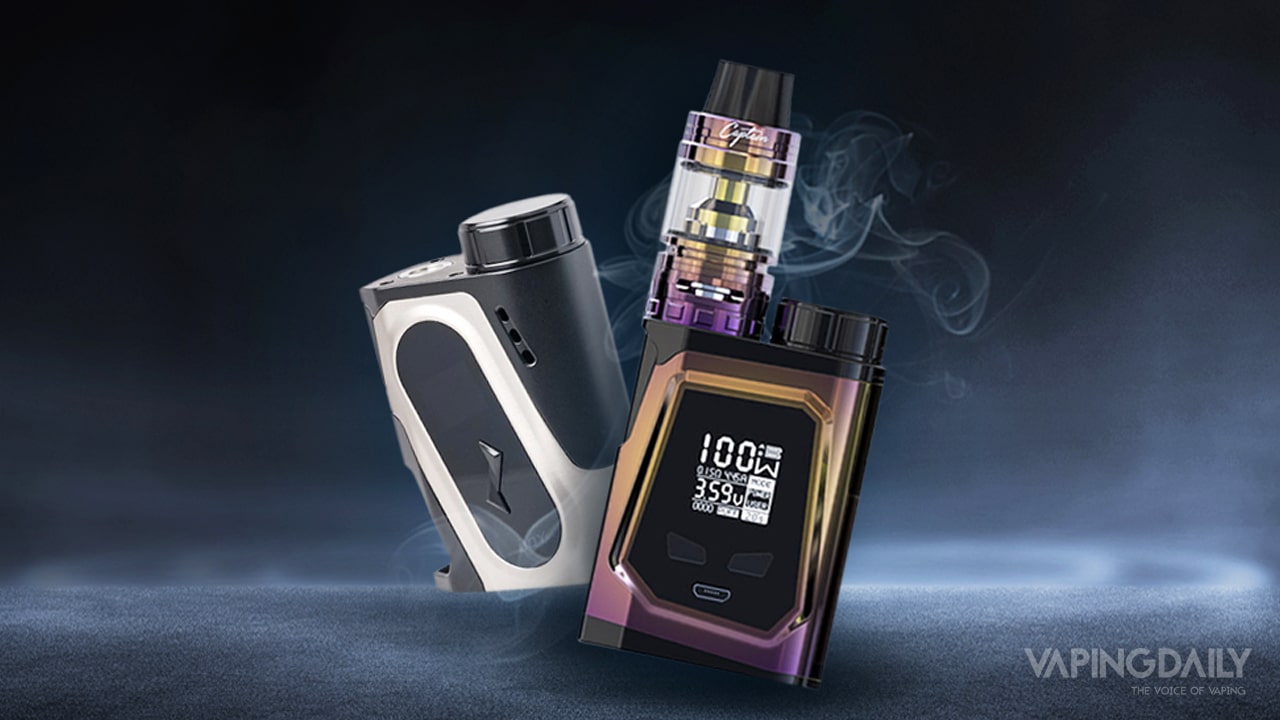 Inside your iJoy Capo 100W starter kit, you will find the following:

Sometimes you just know by looking at it that you’ll like something. My admiration for the iJoy Capo 100W started as soon as I saw the device during my pre-review research. And that initial impression was cemented as soon as I held the Capo in my hands.

But what drew me in from the beginning about the iJoy Capo was not only its 100W power maximum but its compact, small design. The Capo isn’t advertised as a “mini” or “nano” device, but it does fit the criteria for a great portable mod. It measures close to 80 mm in height without the tank attached, and it fits great in the hand.

The mod itself is a little boxy, even though the side with the firing button does have a slight curve to it. There are few ergonomic touches but, again, its small size ensures a comfortable fit. The zinc alloy casing around the mod feels reassuringly reliable and durable.

And that is yet another much-appreciated characteristic of the Capo – its weightiness. The heft of the device guaranteed quality and endurance, although it was not so heavy that I couldn’t walk around town with it. And even though it only takes one battery, the Capo was still able to power through at least a day and a half of continuous vaping.

Despite the mod’s small size, its side firing button is quite prominent and depresses quite nicely. I found the OLED screen a tad minuscule, and it’s unfortunate because the display is ultimately a little too jumbled together and the screen looks a little crowded.

On the back side of the mod, you have a sticker panel with a colorful light design, which is nothing remarkable but is low-key enough to add a touch of flair to the overall layout still. On the top of the device, you’ll find the threaded top cap alongside the gold-plated, spring-loaded 510 connector.

The presence of a top-loading battery usually means that the mod is restricted regarding tank sizes. The Capo can comfortably accommodate the Captain Mini sub-ohm tank and its 22mm diameter. I would say, though that the Capo could also take something in the range of 22 to 26mm easily, while anything above 26 might be pushing it a little.

Putting the iJoy Capo 100W to Use 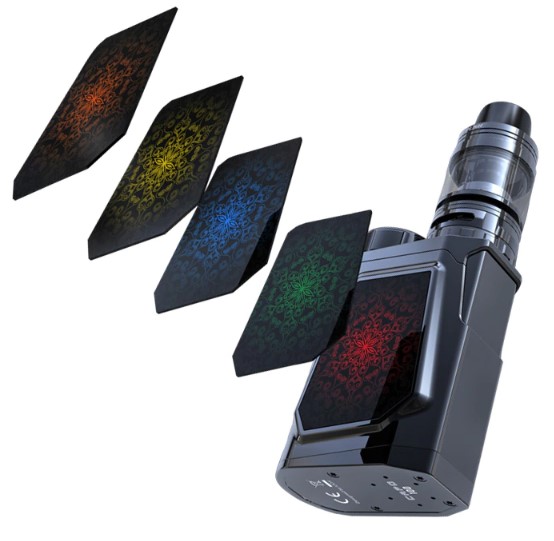 While the iJoy Capo does impress in the design and layout department, its internals is where the iJoy Capo shines. The IWEPAL chipset on the Capo, like with most other iJoy devices like the Captain and the Genie, offers users an easily manageable vaping experience.

You turn the device on with the standard five clicks on and five clicks off, and you use the two selector buttons between the bottom of the screen and above the USB charging port to operate the rest of the mod’s functions.

The chipset offers a typical suite of vaping outputs, like variable wattage and temperature control for metals like nickel, titanium and stainless steel. The Genie and Captain models all had the same vaping options including the power modes that range from normal, soft, hard and the user mode that doubles as a curve setting.

There is also the TCR mode for advanced vapers who want to play around with temperature coefficients. But since the Capo is a pared down device, with a back-to-basics aura surrounding it, (unlike the Captain with its astronomical but misleading power output or the Genie with its plethora of bright, shiny lights), there is little complication or knowledge needed to get the Capo operating beautifully.

The iJoy Capo 100W represents the pinnacle of greatness for iJoy. I know I’m getting ahead of myself, but all the great elements of the iJoy product line have been distilled, broken down and reassembled into this fantastic-looking and amazing mod.

I’ve vaped many times on the Captain sub-ohm tank, but have never used the Mini version. The deficiency of size is noticeable in its 3.2ml capacity and the rather tiny fill hole on the top-filling tank, but those were not obstacles that could not be overcome.

With the device only being able to reach 100W, and if you’re not vaping at 100W at all times, your e-juice is sure to last you for a good long while even if it only maxes out at 3.2ml. The CA-M1 and CA-M2 coils are unknown by me, but their respective resistances, at 0.5 and 0.3ohms were a perfect match for the sub-ohm capabilities of the mod, which has a resistance range of between 0.05 and 3.0ohms.

And now, getting back to where we started regarding the Capo’s 100W maximum, the Genie and Captain were behemoths regarding power output, but their advertised peaks were not always accurate. 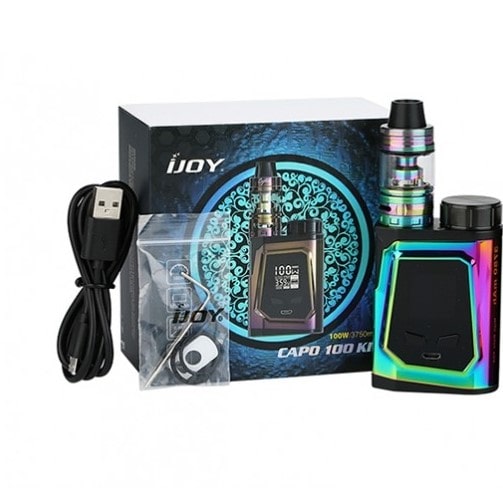 With high-wattage devices, you start to notice how their outputs are not matched in their vapor production with sometimes stale and overheated clouds emanating from their tanks. The Capo did not have that problem. 100W is a golden middle between flavor and vapor density.

I used the pre-installed CA-M1 coil in variable wattage mode and started off at 60W. The firing button powered the device immediately with little to no warm-up time required. When I got the device to its maximum, 100W, I was hit with great-tasting, dense and foggy clouds.

Stacking Up with the iJoy Capo 100W

I only thought of one other company capable of providing a serious challenge to the iJoy Capo 100W, and that was the Vaporesso, and its Tarot Nano, which was one of my favorite box mod starter kits of 2017.

Not only does the Vaporesso Tarot Nano have a similar top-loading battery configuration (18650 only, however), its max output power range of 80W was superb in providing remarkable cloud cover. And having one of the best chipsets out there right now, the Omni 2.0, on board, there were levels of customization and perfectibility on the Tarot Nano that you couldn’t find anywhere else.

Right away, however, one pro that the iJoy Capo has over the Tarot Nano is its compatibility with all battery types from the included 21700, the 20700 and with a sold-separately battery sleeve adapter, the 18650. The IWEPAL chipset does allow for a curve option on the Capo, although the Omni chipset allows for a more thorough and precise curve setting.

So, although I feel like a heretic for saying this, for the mere option of being able to take various battery types, I think the iJoy Capo has a distinct and overpowering advantage over the Vaporesso Tarot Nano.

It is substantial regarding its weight, which only made me feel confident that the device could take a couple of knocks and still keep on vaping thanks to the zinc alloy construction.

Small Screen and No Spare Glass in Tank

OLED screen is jam-packed with too much information. Unfortunately, tank does not have a spare glass.

In my own vaping life, I rarely hit a three-digit wattage level. But having that option on a great-looking, easily navigable device like the Capo was much-appreciated.

The iJoy 21700 mimics the performance of two 18650s, so you are pretty much guaranteed a lengthy, satisfying vaping experience off of just one charge.

After going through the top range of wattages, iJoy finally took a left turn and decided to see how well they could make a lower-wattage device, and they succeeded. I loved the Capo’s compactness, its excellent feel and weight and the sturdiness of its build.

There is no locking feature on the Capo, but the firing button is not so sensitive that it would start misfiring if there were even a small amount of pressure put on it. The screen was a bit overcrowded, and some readouts were not necessary, but I was still impressed by the overall design of the Capo.

The Captain Mini and its two accompanying coils were stellar performers in my view. My vapor was smooth, warm and the airflow vents allow for a breezy rush of vapor to emanate with every inhale.

The iJoy Capo 100W starter kit is one of the best of the year.

3 comments on “iJoy Capo 100W Review: This Is The Mod We’ve Been Looking For”