As far as vaping is concerned, we are in a time right now of unprecedented progress. Things are changing, it seems, almost every month in vaping: more intelligent chipsets; higher and higher power outputs; an unending amount of coils in one atomizer; even more customizable vaping outputs.

And now, from IJoy, another first; a triple 20700 cell device that can attain an output of an astronomical 324W. Just like the Reuleaux from Wismec, the Captain is a long-running series for iJoy of which the X3 is the third installment. 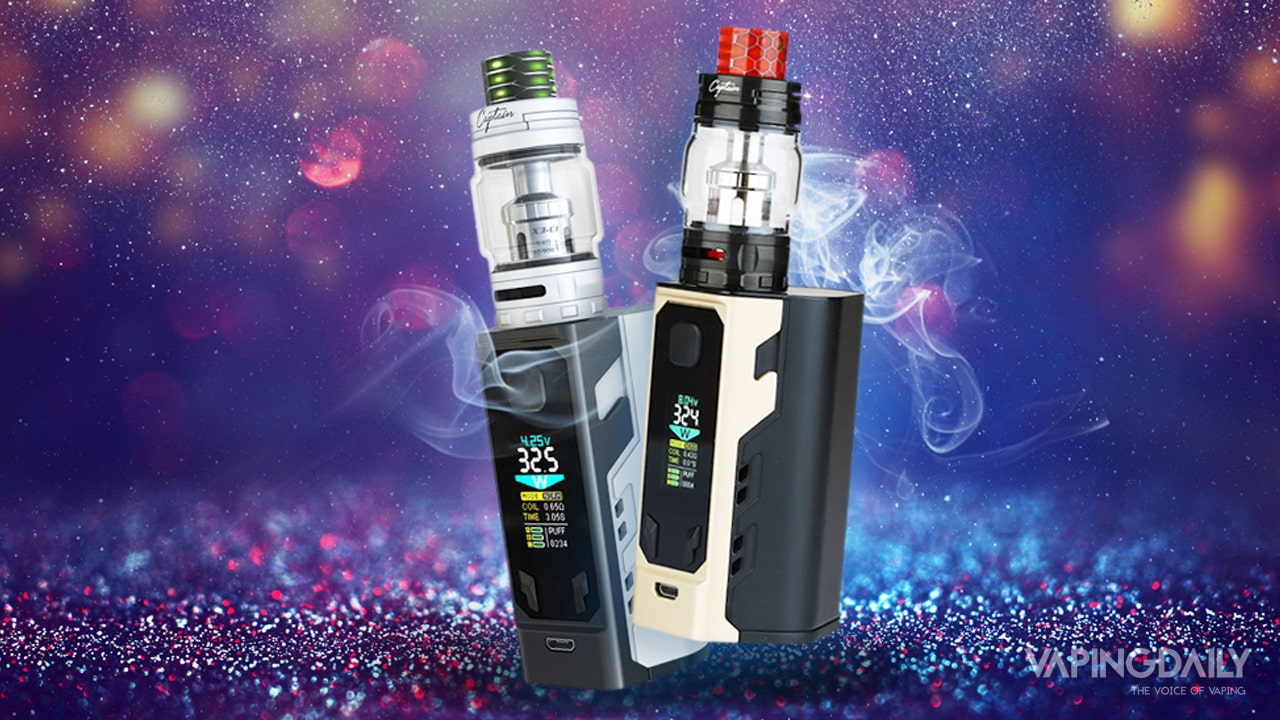 With each new IJoy Captain, the company has sought to increase power output, with the latest version of the Captain, the Captain PD270 taking two 20700 batteries and attaining an output of close to 230W.

Apart from the huge power output of the Captain X3, it also features a brand-new IJoy chipset inside that powers each vape you take efficiently, increasing both the quality of your vape and the life of your batteries.

The kit comes with the sky-busting, cloud-making Captain X3 sub-ohm tank and two coil options that don’t quite match the potency of the mod but still deliver a hefty dose of tantalizing vapor clouds.

Kit Too Good to Be True

Here’s what you’ll receive in your IJoy Captain X3 Kit:

Well, any experienced vaper (or vape review) would automatically think of only one device when looking at the IJoy Captain X3. I’ve already mentioned it at the top, and because of the Captain X3’s resemblance to the Wismec Reuleaux line of mods, I will also be making a comparison of the two later on in the review.

The Captain X3 bears more than a striking resemblance to the Reuleaux mostly because of its triangle shape and wide body, but also because of the placement of the OLED screen, power and selector buttons, and the 510 connector. The connector on the Reuleaux was pushed a little more into the center of the mod allowing for greater compatibility with larger tanks.

The 510 connector on the Captain X3 sits a little more to the side of the front OLED screen, but it can still take a tank with a 26mm diameter with no overhang. Speaking of the OLED display, it occupies the front panel of the mod, and it is bigger and brighter than most other screens I’ve seen. And it’s in color!

This lack of color was something I noted about the screen on the Vaporesso Transformer. While its screen was wide and ample, it was oversaturated in that cold, flat, digitized world of endless darkness and only a faint, bluish hue to provide light.

I liked that the Captain X3’s screen brought a little more color to the proceedings. Sometimes adding just a splash of color is enough to spruce up any dull-looking mod, just like the Joyetech EKEE did.

Color, thankfully, takes up most of the outer chassis to the Captain X3 with everything but the OLED side covered by a rubberized, matte finish that comes in six different color options. The bottom of the device is where the three 20700 cells are loaded, and the battery door slips off for easy loading.

A few battery venting holes line each side of mod behind the screen section. And instead of opting for the more conventional four-sided “box” shape of most box mods, the Captain X3 has that more ergonomic, three-sided build that seems more suitable for a three-celled device.

The dimensions put the Captain X3 a little taller than the Wismec, given the height of the 20700 battery, but its width and thickness are also quite similar to the third-generation Reuleaux RX3.

Another small, but significant advance that a lot of vape companies seem to be doing these days, is including a higher capacity bubble tube in their kits to sometimes double, or even triple, e-juice capacity. This extra makes sense of so many levels, primarily when featured in high-wattage devices that come with juice-killing outputs and tanks.

With higher-wattages devices and coils that can vape up to 120W, your juice levels are going to be taking a hit. The inclusion of a tank-expanding glass tube shores up all those variables that accompany powerful units.

So Many Ways to Use

I usually mention the fact that I have never reviewed a company’s devices before, as is the case with IJoy. I thought they might have been an offshoot of Joyetech, but, obviously, that wasn’t the case.

So this is my first time with a mod from IJoy, and I found no real complication with the user interface or the button layout. There are only three vaping outputs — temperature control, variable wattage, and TCR — although there are also customizable superfluous features like flipping the screen, and a puff counter.

Thanks to the new X3 chipset, there is a custom curve option in power mode, which also features the typical hard, normal, and soft options. The menus and screen outputs are easily legible and well-displayed. Five clicks turn on the device, and three clicks of the power button let into the menu options.

I wanted to push the IJoy Captain X3 to its limits but getting anywhere close to that kind of power output would require an RBA or RDA. Luckily, I still had my Goon RDA lying around somewhere, so I did a fresh build and put it aside to see how it would pair with the IJoy Captain X3.

I tried the Captain X3 only with the included 0.2ohm X3-C3 sextuple coil, and I started somewhere close to the recommended wattage range at 100W (the recommended range is 90W-110W). The button response was immediate, and the mod did not struggle at even that high power output.

The Captain X3 does have preheat settings, but I didn’t use them. I went straight to the high-wattage range, and I was satisfied through and through. I found terrific cloud structure and density, as well as excellent taste.

Slapping on my Goon RBA, I was excited by the high-wattage vaping that was about to descend on my office. There is no simple bypass mode on the mod, so there just the variable wattage mode that you can push to as high as 324W.

I started vaping at 225W and was hit by humongous clouds. But I’ll admit it; I was a little hesitant about going all the way to 320W. I only pushed it as far as 250W, and the cloud production was much thicker, although the flavor came down a bit.

Well, you knew this was coming. The IJoy Captain X3’s resemblance to the Wismec Reuleaux RX Gen3 brought about the inspiration to compare the two devices. 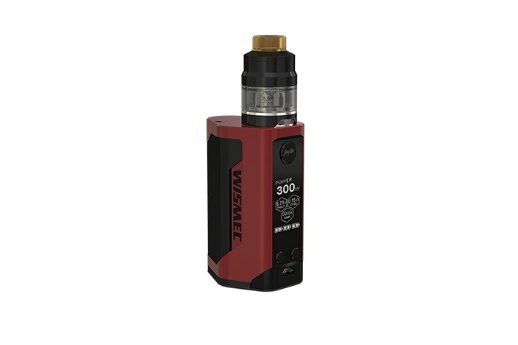 The Reuleaux is nothing to sneeze at either in the power department with its three 18650 batteries powering its 300W capabilities. Because of those two 18650 cells, the RX Gen3 is a tad smaller in height than the Captain X3, and that gives it a distinct advantage when it comes to portability.

The RX Gen3 could make a case for being a portable, on-the-go mod with it more slight build, but the Captain X3, especially if you install the tank capacity extender, might have a harder time disappearing.

I liked the RX Gen3 for its small size, and great build and above-average performance. The high-wattage output of the IJoy Captain X3 doesn’t much come into account here since I’ve never noticed much difference in the high-wattage ranges and I didn’t even push the Captain X3 that hard.

So, I’m not sure what’s going to decide this contest. But, the one glaring difference between the two devices is definitely their sizes and how easily they can be carried around. I found myself much more comfortable taking the RX Gen3 with me than the Captain X3 especially since I couldn’t find any locking features on the menu.

I’m not saying that the Captain X3 doesn’t perform well; it just had that one deficit. I would still highly recommend it as a stay-at-home device.

I’m going to resist the temptation to accuse the IJoy Captain X3 of being a clone or a straight-up “rip-off” of the RX Gen3. To paraphrase T.S. Eliot “immature vape designers imitate; mature vape designers steal.” If the layout of the RX Gen3 worked so well for a three-cell device, then it makes sense to take that same design and use it with your own version of a high-powered device.

I wouldn’t want a close to 9000mAh battery powered mod misfiring in my pants. I couldn’t find any way to lock any of the buttons on the mod, which to me seems like a huge oversight on IJoy’s part.

The extended tank capacity on the Captain X3 tank was a much-appreciated feature. The tank is easy to fill, well-machined, and performed superbly with the Captain X3’s output.

Since triple 20700 batteries in the same mod is a relatively newer feature on most mods, I liked this other low-tech add-on that also let me use my 18650 batteries, so if I wanted to keep vaping with the Captain X3, I could use those adapters.

The IJoy Captain X3 isn’t going to win any points on originality or design innovation. Slapping three 20700 batteries into a mod wasn’t such a huge leap forward since it seemed to be the next logical step to take.

And, technically speaking, it might have made sense to “borrow” the design schematics of the Wismec RX Gen3 to fit three 20700 batteries in there, but that’s all that IJoy did. There’s still the X3 chipset and a different interface that gave credibility to the claim that this is an IJoy device and not a clone.

The IJoy Captain X3 is a well-performing device. It had grand ambitions, and fulfilled them well-enough, although the three 20700 batteries power supply did not exactly set my hair on fire with its originality.