The GeekVape Aegis Mini is a smaller version of the Aegis vape mod but retains the near-indestructible exterior of the original.

The Aegis Mini uses an internal battery with a capacity of 2200mAh instead of a removable one. It features the same aluminum alloy, silicone-sealed exterior giving it an IP67-rating against water damage, while also being dust-resistant and shockproof.

The Mini has a similar form factor, as well, with the leather-wrapped handgrip and front-facing OLED. The Mini kit includes the Cerberus sub-ohm tank and two SM X2 Single Mesh coils rated at 0.3ohms.

A Close-Up Look at the Aegis Mini

The Aegis Mini mod keeps the same basic foundation of the original with its leather-wrapped back and front-facing OLED. It is a bit thinner thanks to the internal Li-Po battery compared to the single-18650 set up of the first Aegis. The mod measures only 27mm across (1.06”) giving it improved ergonomics, even though the original design also made it comfortable to hold.

The mod features the same rubberized texture along the middle, where the GeekVapes brand is also visible. The leather-wrapped backside is soft and is the one place that features some design flair, as it can come in several colors and patterns (eight in total). 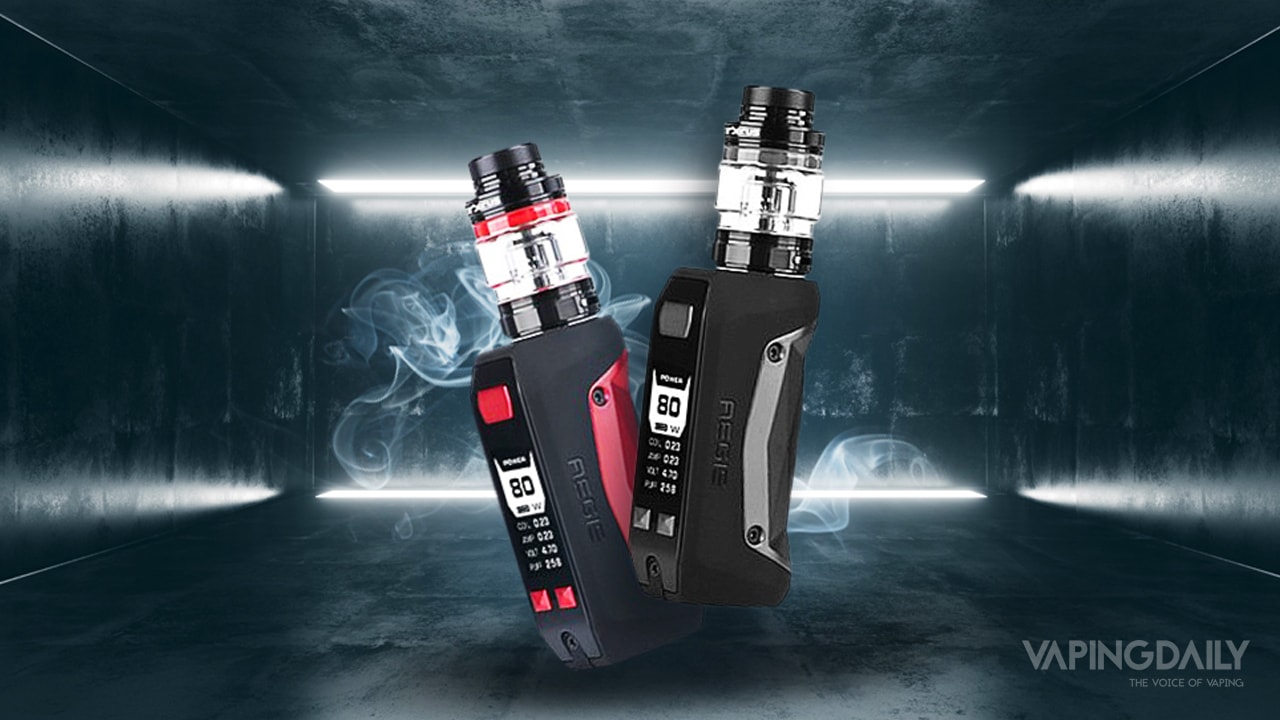 Up top, the unit has stainless steel, 510-connection that, because of its slimmer profile can take attys measuring up to 24 or 25mm, but no more. The front-facing OLED has the same configuration as the first. It is bright and displays information in a vertical style.

The control panel is laid-into the display and consists of the oversized firing button along with the two lower up/down buttons. The internal cell is not removable. The original Aegis had a bottom-battery bay and stainless steel threaded at its base, but the Mini does not. 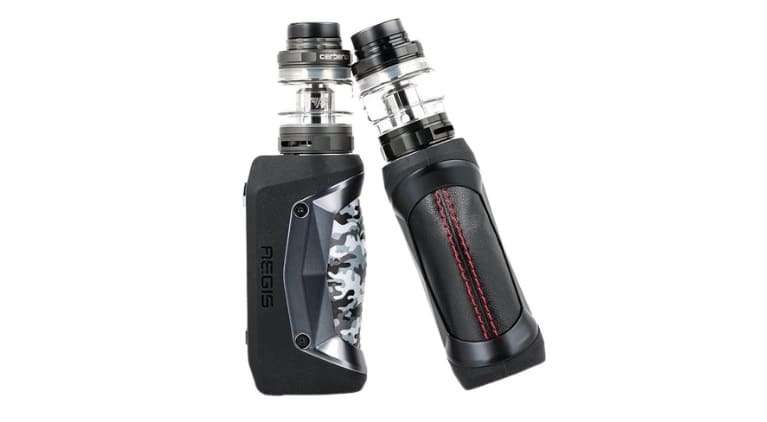 Instead, the mod has several battery ventilation holes, as well as a USB port covered with a silicone plug attached to the mod. The USB port is for charging the 2200mAh battery as well as installing any potential firmware updates.

The Aegis Mini comes as a kit and includes the high-quality Cerberus tank. The kit comes outfitted with everything needed to keep the mod and tank in good working order. 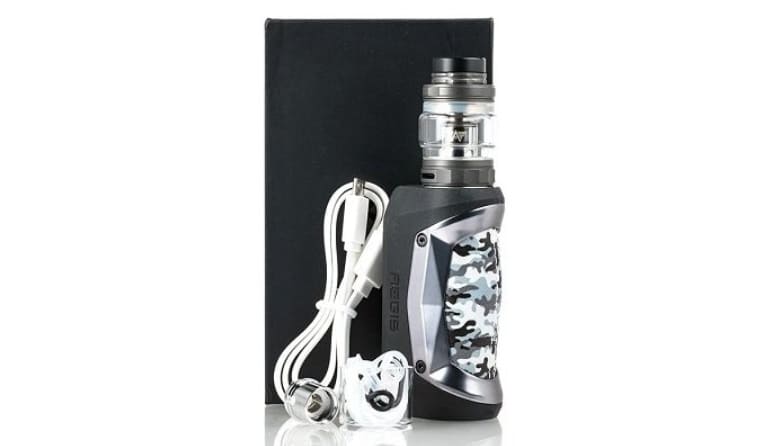 Users will find the following in the Aegis Mini Kit:

GeekVape has made a name for itself with its triple-threat mods that are:

The company has been able to create mods that are all these things while remaining low-profile, easy-to-handle, and comfortable to hold. Even the original Aegis was a single-cell mod so it had a portable form factor.

The new Aegis Mini improves on that front in every respect. It measures 120mm tall (4.7”) so it is not the shortest mod, and with a tank attached maybe not the most pocket-friendly.

The mod’s external durability is what makes it the perfect device for the outdoors, though.

The mod could, and has, withstand basic stuff like drops, or getting soaked in water although it would come at the cost of scratches or damages to the finish. But other than those cosmetic blemishes, the mod stands up remarkably well to long and prolonged use in many different environments.

The stated capacity of the internal cell inside the Aegis Mini is 2200mAh.

The AS 2.0 chipset inside can output a maximum of 80W, which seems reasonable for this style of a mod.

On a full charge, with the 0.3ohm coils installed in the tank, the mod could provide for all-day vaping if it was set at something like 30 or 40W.

Going a little higher than those variables would require at least a mid-day charge. Users can recharge the cell via the USB charging port.

Charging from a depleted cell to a full one would take about two hours, even with the cell’s fast 2A charging. The mod does not feature pass-through charging, so it’s best to have a back-up vape just in case.

The Cerberus Tank and Coils

The Cerberus tank made its debut with the original Aegis mod, and there have not been many updates to its design. It is still a stainless steel and glass tank that features bottom adjustable airflow control.

The tank has two glass pieces — one straight, the other convex — that give it two capacities.

The atomizer comes pre-installed with the 5.5ml glass, but users can install the spare glass section that has a reduced 4ml capacity.

The tank comes with a 510-Resin drip tip pre-installed that is 8mm in diameter and removable, as is the top cap, which is threaded.

Remove the top cap by giving it a slight turn to unlock it. Removing the top cap reveals the two sizable fill ports to fill the tank.

The kit includes two GeekVape single-coil mesh-style atomizer heads, but the great thing about the Cerberus tank is its compatibility with other coil heads from other brands like SMOK, Vaporesso, and Eleaf. 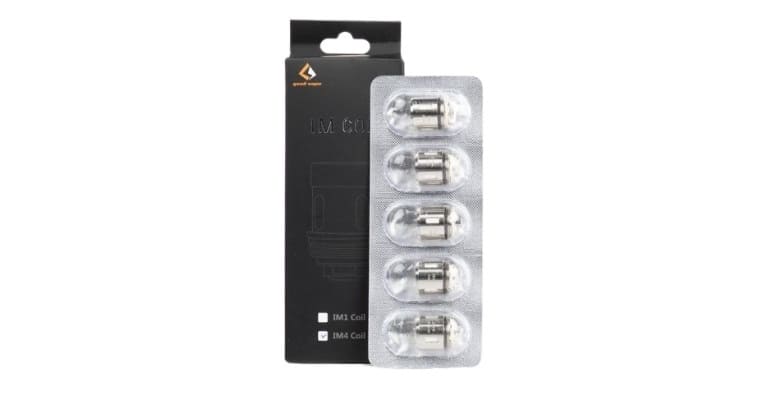 The coils feature Kanthal wire and perform best between 30-45W, which seems like an ideal range for the low-wattage Aegis.

The coils and the mod offer a good balance for cloud-chasers and flavor chasers. The coils can work well with 50/50 VG/PG for a well-balanced vape, while higher-VG e-juices would perform best to produce bigger clouds.

But if users want coil heads that can tackle higher-wattages, then they can simply take SMOK Baby V8 coils or Vaporesso CCELL cores and install them into the threaded base of the tank. These coils can provide a higher-wattage range for those looking for more cloud cover.

The tank and mod are an excellent pairing especially for vapers who want a portable, high-performing mod without the bulk or heft of larger devices.

The AS chipset enables several different vaping modes from variable wattage to temperature control for nickel, titanium, and stainless steel, as well as Bypass mode for use with super-sub-ohm coils.

The chipset makes the mod respond very quickly to commands and changing the values of all your variables is very straightforward.

The control panel features two-button control along with the firing button, all of which are significantly raised off the screen so they are easy to access.

The OLED, which measures 0.96” has a vertical-style display like with most GeekVape devices.

From the main screen, users will be able to read their wattage, coil resistance, amperage, and puff timer. 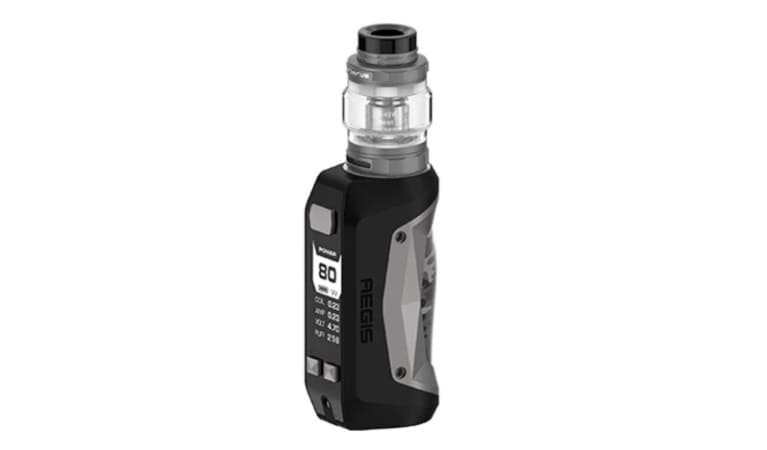 The board does not feature any preheat or boost mods, but for the modes that it does have, it performs very well in all of them. Even though it has a hard time managing high temperatures in TC mode.

Vaping within the recommended ranges for the SM X2 coils gave off the best quality vapor, in terms of flavor and cloud size, but going a little beyond did not affect their performance either.

The mod easily reached its high-power limit, as 80W is an accurate rating for this battery-type.

The Aegis Legend is the precursor to the Aegis Mini and other subsequent Aegis mods. It is a dual-18650 device that can reach a high-power output of 200W, which may or may not be entirely accurate. 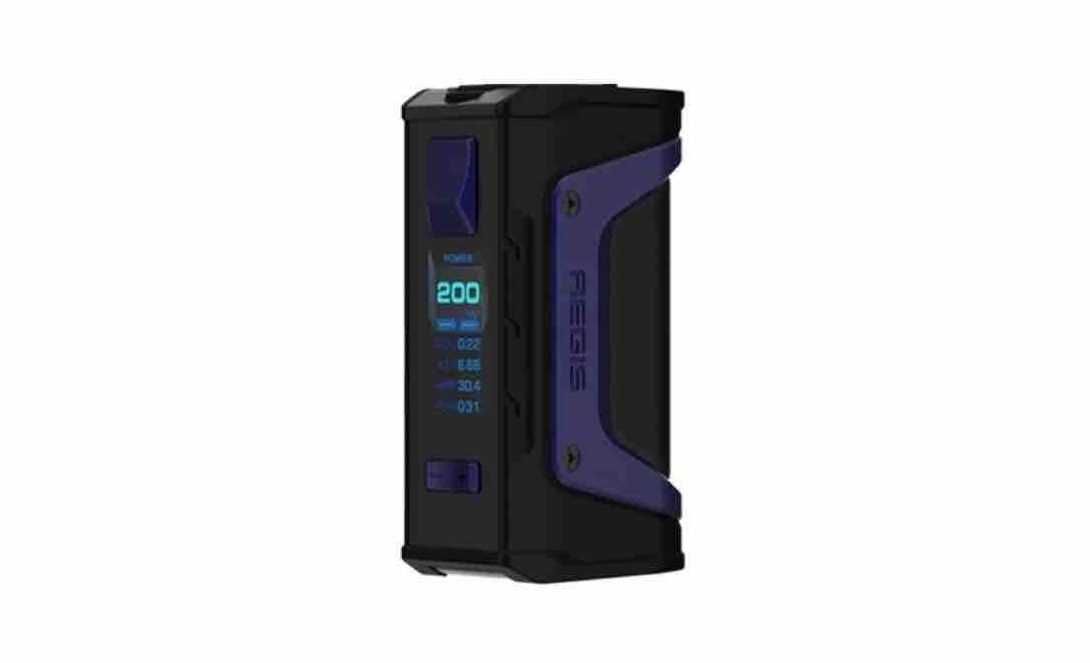 The Legend uses the same build type as other GeekVape mods with its aluminum alloy exterior and leather-wrapped backside that protect it against water, dust, and dirt as well as hard falls.

The Legend has a much-smaller 90mm height than the Mini, but it has a wider shape.

The Boost is a scaled-down variation on the Aegis mod that comes in a pod format. The Boost features an internal 1500mAh battery along with a 3.7ml pod that uses removable sub-ohm coils. 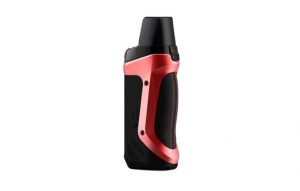 The Boost also features a sturdy aluminum alloy build, a leather-wrapped grip, and an OLED control panel for users to adjust their settings.

Final Verdict: A Vape That Protects Itself

The GeekVape Aegis Mini continues the tradition set down by the original device only in a smaller format. The Aegis Mini retains all the smooth functioning, superior build quality, and durability of the first but in a more scaled-down exterior. The power source is now internal and non-removable, which has its pros and cons.

The cell can be easily recharged via the USB port and have improved portability, but they cannot replace a depleted cell with a fresh one.

The 80W power limit allows for a great balance between flavor and cloud-density as the coils can perfectly match those parameters. The fact that the Cerberus tank accepts other brands of coils also makes it very versatile with a wide appeal to all types of vapers.

Have you ever used an Aegis mod? How do they hold up to everyday vaping? Are they as durable as they say? Let us know in the comments section below.