The Espion Infinite: A Revolutionary Creation from JoyTech

The JoyeTech Espion Infinite 230w AI with the ProCore Conquer Tank is the latest box mod from JoyTech, utilizing voice recognition and artificial intelligence to improve the vaping experience. The vape also has an intuitive 0.96-inch color display screen. Dual 21700 batteries power the mod, but it is also compatible with 18650s. 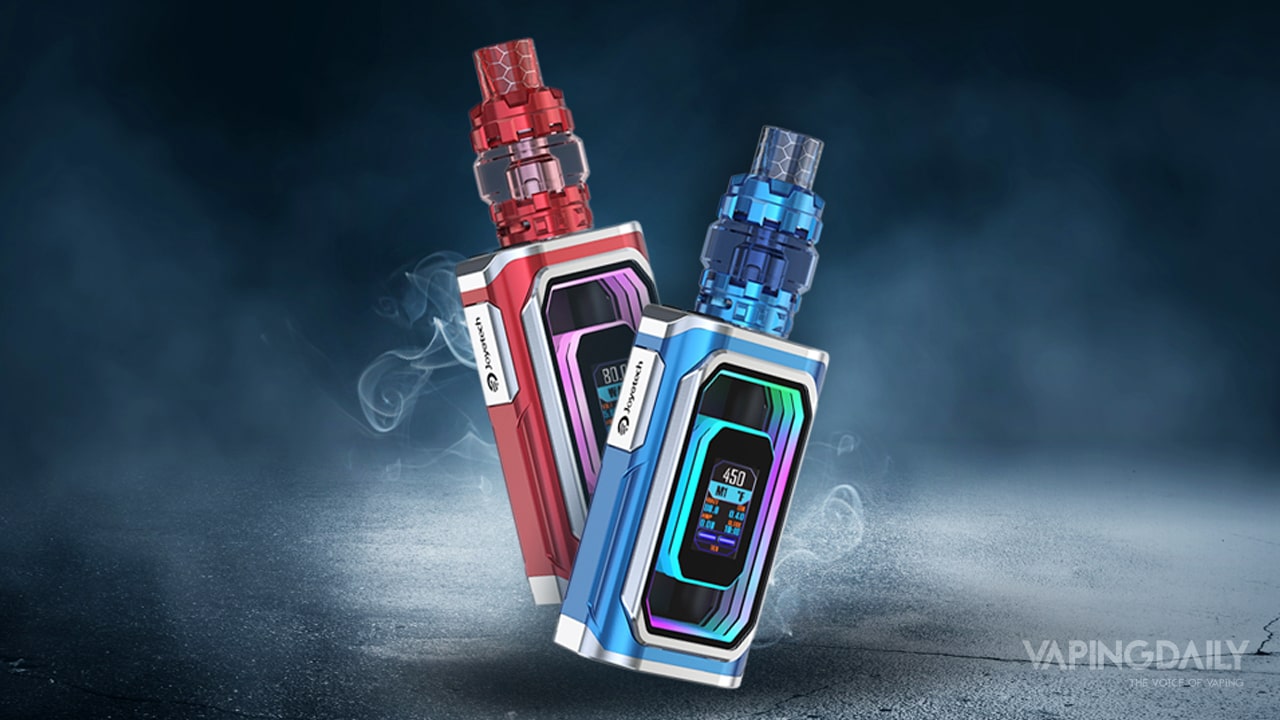 The mod generates over 200 watts of output and supports 2A fast charging. Additionally, this vape comes with a ProCore Conquer tank that holds an impressive amount of e-liquid. The ProCore tank supports several types of coils, and it is easy to refill. 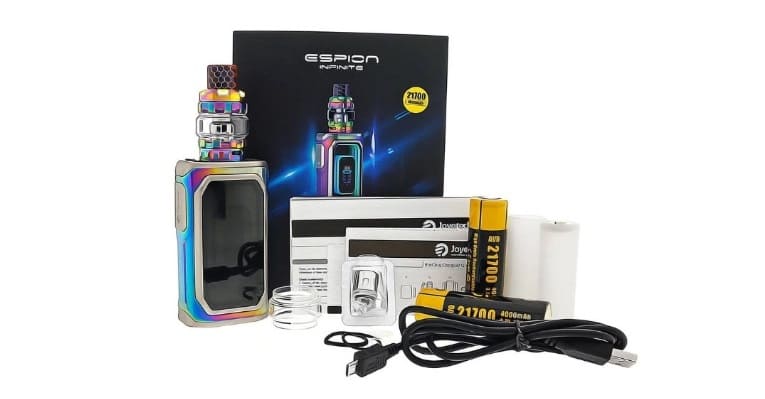 Other essential parts and information are in the kit, as well. There is a user manual, warranty and warning card, and spare parts. Read the manual before operating the mod. If the vape is damaged because of misuse, the warranty will not cover it.

The build quality for this JoyTech box mod is adequate. The 510 mounts are gold plated and spring-loaded, and the tank fits perfectly. 30 mm atomizers fit with no overhang. The battery door slides open, and it stays closed with no rattling. There is a big firing button on the side, but it is difficult to push down. The power button sometimes gets stuck. 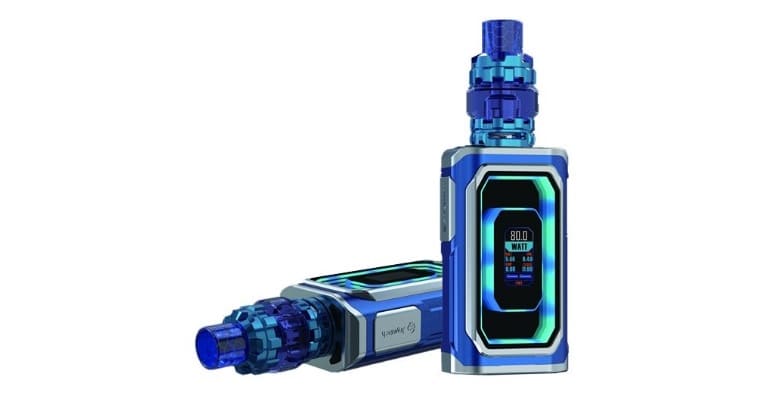 Another design feature users will like the plastic window covering the screen. It smudges easily, and taking it off can be tricky. Also, it wiggles around slightly. But, it keeps the screen safe from damage.

This box mod is not the most comfortable on the market. First, it is quite large, and it is not very portable. Secondly, the adjustment batteries are placed on the top of the mod, not above the screen. The placement of the adjustment buttons makes operating the mod inconvenient.

As earlier pointed out, the device uses dual 27000 and 18650s. 27000s are the best option for battery life. The batteries can be charged via the USB cable or with an external charger. The USB port is placed beneath the 510 connection at the back. This location increases the likelihood of a short circuit caused by a leaking tank.

The ProCore Conquer Tank holds 5.5 ml of liquid, and it comes with ProCA (0.4 ohm) and ProCD (0.15 ohm) coils. Both are kanthal coils designed for vaping at 40 to 80 watts. The threads of the coils fit flawlessly, and installing them is simple. The tank has bottom-fed, adjustable airflow, the slots are large, and the airflow control ring is easy to operate. Refill it by sliding open the top port. Open the airflow control all the way or close it completely. The tank uses an 810 drip tip, which makes for deep, airy drags.

The tank occasionally leaks because the fill port opens too easily. These leaks usually occur during transport. Before putting it in a pocket or travel bag, empty the tank.

The ProCA coil is suitable for vaping at 55 to 60 watts. It delivers decent vapor and flavor, but it is nothing special. The ProCD coil has a lower resistance range, and it provides better flavor and vapor than the ProCA. It can tolerate 90 watts, but the taste is better between 55 and 65 watts. Both coils fire quickly, too fast for the menu. Once in a while, the screen goes blank when the mod fires.

How Long Do the JoyTech Coils Last?

How to Use These JoyTech Vape Kits

The device is easy to use, but there is room for improvement. Five clicks turn it on and off, and holding the up and down arrows for two seconds locks it.

Three clicks of the firing button take the user to the menu, where modes and settings can be accessed. There is variable wattage, temperature control, TCR, and RTC settings. In the settings, the user can access coil, power, stealth mode, and other functions.

The menu functions are excellent, but the screen is not large enough to display all the information. Also, the brightness cannot be adjusted, making it difficult to read the display outside.

Voice control is starting to appear in more and more box mods. The JoyTech Espion Infinite’s voice control option works reasonably well, and it can be used in place of the menu buttons.

The vaping experience with this JoyTech box mod is excellent, with a few exceptions. It has variable wattage to 230W, and temperature control is compatible with stainless steel, nickel, and titanium. Also, TCR has three memory settings. Additionally, VW and TC modes work well enough at sub-ohm resistance levels, and preheating is available in VW. 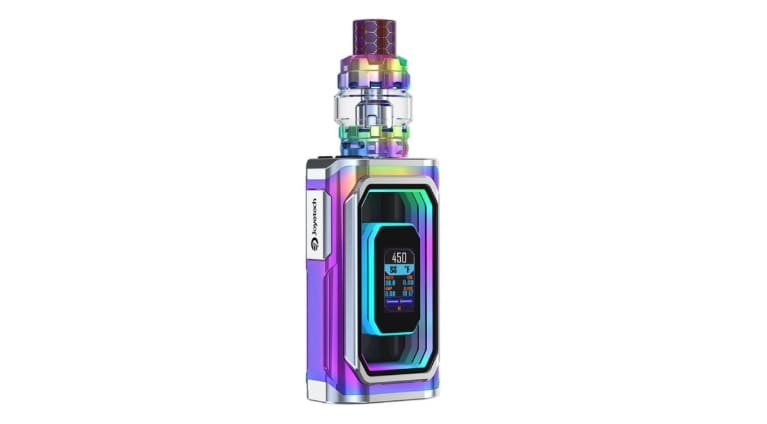 JoyTech tanks are easy to use, and they hold a lot of juice. Also, this device is compatible with a wide range of coils, and the battery life is phenomenal. But, the coils in the starter kit do not last long enough. Other tanks have coils that can last two or more weeks, depending on how often they are used. These coils only last a few refills. Also, while the flavor and vapor are good for the first few days, the vapor starts tasting burnt and dry after several refills.

Another thing that detracts from the vaping experience is that it is too large. Yes, it fits dual batteries, which makes it larger, but other box mods with dual battery configurations are not this difficult to handle.

Under “info” on the menu, the firmware version can be seen. Upgrades are available on JoyTech’s website, and they work with PC and Mac. The only firmware available for now is Version 1.0.

The main difference between these mods is that the Smok Nord is a pod mod kit. The pod holds 3 ml of juice, and the battery has a wattage range of 10 to 15 ml.

Another key difference is that the Smok Nord uses a built-in 1,100 mah battery. The JoyTech Espion Infinite has higher juice capacity, and it can be vaped at higher wattages. But, the Smok Nord has better flavor, which is its main advantage.

These mods are similar, using voice control and sporting a variety of settings. What sets them apart is that the Avenger is more portable and better designed. 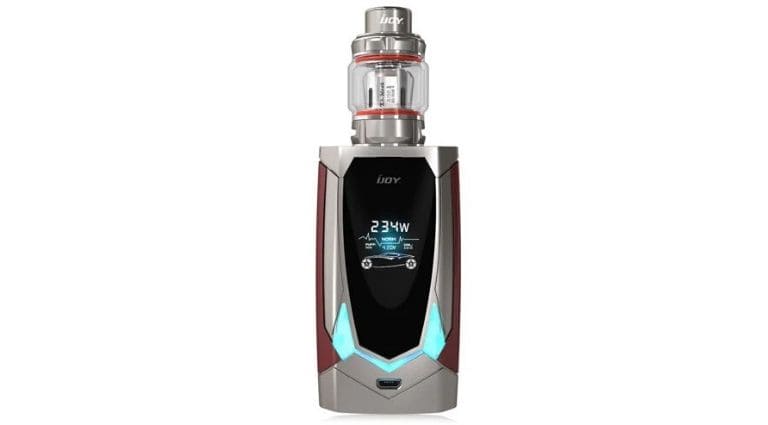 There are things to like about this box mod and things to dislike. The best aspect of using JoyTech Espion is a massive tank with excellent airflow and batteries that last forever. Also, the flavor and vapor are excellent when the coils are new. But, after only a few tanks, the taste and vapor quality decrease significantly.

Another problem with these mods is that they are not portable. Despite these problems, it is a good starter kit for the price.

One comment on “The Espion Infinite: A Revolutionary Creation from JoyTech”