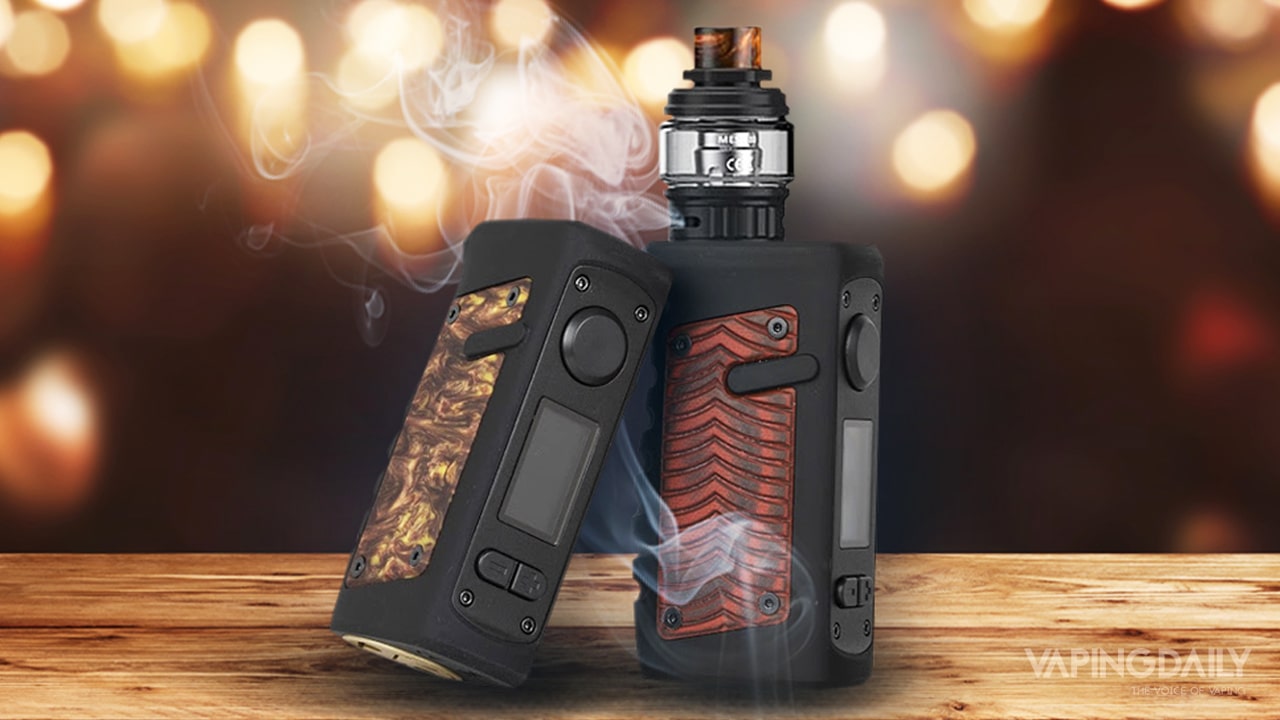 The Jackaroo 100W vape unit also comprises a 0.91 inch OLED box-screen and a three-button control configuration to handle, control, and customize all its features, which is the common setup for most box mods that come as a vape starter kit. The Vandy Vape Jackaroo 100W kit also includes the new Jackaroo sub-ohm tank that has 3.5ml e-juice capacity and comes with two, sub-ohm mesh-style coils.

In the split-level, top-open box the Vandy Vape Jackaroo kit comes in, the vape mod, the vape tank, extra bubble piece, and spare coil sit on the top of the kit, while the other package components are on the bottom level of the box.

Here’s a list of everything that comes in the Vandy Vape Jackaroo box:

The Vandy Vape Jackaroo has a pretty-beefy look to it. This Vandy Vape mod is supposed to be as indestructible as the GeekVape Aegis, and all its iterations: the Mini, the Aegis Legend, etc. This Vandy Vape Jackaroo mod features a box-like, water-tight construction that also protects against dust and shockwaves (mostly from falling on the ground, and not the shockwave from a thermo-nuclear attack, but it would be interesting to see if the mod could survive that).

The mod also weighs a ton (not a literal ton, but, it’s just a phrase), which is surprising, as it is a single-battery device, not a dual-battery unit. The official weight (again, WITHOUT batteries), is 230g or 8.1 oz.) so the endurance and invulnerability of the device come at the price of the mod’s portability and discreetness. But, then again, someone who prefers the former from a vape starter kit is not concerned about the latter.

The Vandy Vape chip inside is rated for 100W, and that limit seems conceivable with a high-capacity 20700 or 21700 in the mod’s battery bay. For those who are still hanging on to their 18650s and their 18650 kits, the pachage includes a battery adapter to use in the mod, which should be a standard feature for kits like these, with 20700 or 21700 mods.

Speaking of the batteries, the battery bay seal, which is on the base of the Jackaroo unit, has similar functioning as the Aegis Legend, with the door threaded on and needing to be unscrewed. When inserted, the door forms a water-tight seal, with the silicone ring around the lip.

Vapers need to push up the small handle that helps remove the door, but watch out! Because that handle has some sharp edges. The Vandy Vape Jackaroo’s removable side panels are another design feature worth writing about it, as it differs from other mods.

Users can choose between G-10 (a fiberglass laminate) or resin side-panels that, of course, come in a variety of colors (six for the G-10 panels and four for the resin ones). The entire device itself is a zinc alloy, which is covered by a soft-touch, silica gel/rubber exterior.

The zinc alloy makes up the bulk of the box mod’s build, which explains why it is so heavy, as most mods only have a few parts that are zinc or aluminum alloy. Turning to the control configuration, the Jackaroo features a bright, 0.91 inch OLED display with a three-button setup, as is standard with most starter kits these days.

There is a huge, over-sized, protruding firing button right above the mod’s screen, and two, also-huge, up/down or plus/minus buttons underneath the display. The ergonomics of the mod are also impressive for a vape starter kit. There is a slight, inward curve on one side of the chassis to make it more graspable or to be “anti-skidding” as Vandy Vape calls it, and given the weight of this thing, anti-skidding design features are a must.

Getting the Vandy Vape Jackaroo to Work

The Vandy Vape Jackaroo’s operating system and control configuration are not that hard to figure out. The Vandy device’s operating system does have one unusual (almost unnecessary) feature – not seen on other mods – to be mentioned later. Five clicks of the power button activate the Jackaroo, which has a tiny, box screen for such a formidable machine with so many vaping features.

Six different variables on the main screen are not unusual for a single-cell mod but on a 0.91-inch display, but it is a tight squeeze, as it would be for any similar-sized mods. Although Vandy Vapes did an excellent job organizing the info, as well as giving it a legible font.

When the mod is activated, the screen will display all this info but to change the vape’s settings, click the firing button three times and then scroll through the menu. One function that is unique to the Vandy Vape 100 chip is that the pre-installed modes need to be turned on, in the settings menu.

They could also be turned off if a user so desires. The settings icon, which is in the secondary menu, and accessed by clicking the plus/minus buttons together, is where to go to check the vaping features. The first icon with the “tools” is where a user can pick what vaping options to enable or disable on the mod’s chipset.

The menu is a vertical one with the following icons:

This menu is an odd feature for a vape device or any box mod to have. Some people may like it and some people may not. It gives users greater control over the mod’s abilities, but as there is already a lot for a person to do it may seem like overkill. Regardless, the other options in the secondary menu allow users to also:

The Vandy Vape Jackaroo sub-ohm tank seems more like an afterthought than an individual piece. Vandy Vape focused more on the design and construction of the mod than the tank, which is common in these types of kits, but there are some notable things about it as well. The two coils included in the kit, for example, are mesh-style, with wide-bore openings.

The glass sits recessed within the stainless steel outer part so even if it falls, the tank’s glass (hopefully) will be safe. This safety feature does not apply to the 5ml glass piece as it sticks out from the steel frame. The Jackaroo has a removable, resin 510 drip-tip, which is color matched with the color of the side panels when a person orders the kit.

The panels are also removable if that wasn’t mentioned before, as they are kept in place with four hex screws. The Jackaroo tank has two, bottom, adjustable airflow slots, and a top cap held in place with a bayonet fitting, which is not very common with most vape tanks. So users need to twist the lid and then remove it, to uncover the single fill port (curious why they didn’t include two ports).

The Vandy Vape Jackaroo tank and mod make a good pairing. Despite the bias against stock coils and tanks included in mod kits, the Jackaroo sub-ohm is an above-average flavor maker, much more than other tanks. The coils may need something like ten minutes to saturate properly before use, but after, say, one tank-full of e-juice the pre-installed atomizer head should be at full force.

The flavor stands out primarily, at lower levels, like 60-70W – right at the middle point of the coil’s capacity – which can lead to some serious rips that are also very tasty. Depending on the type of battery in the mod, 100W-vaping is more than possible. If there is a 20700 or a 21700 in the bay, then there should be no problem.

A single 18650 may not have the same capacity, as it could only power the device up to 80 or 90W maximum. There were no problems with the device’s speed or functionality. The ability to enable or disable some of the device’s features did prove a useful one. Depending on what style a vaper they prefer, a user can disable all the ones they do not want and keep it simple.

Other Competitors on the Market

The Innokin iRoar Oceanus is a single-20700 mod that comes with the Scion sub-ohm tank that has a 3.5ml tank capacity. The starter kit includes a Kanthal wire 0.5ohm Scion coil, as well as an RBA base for the tank so you can mount your coil build.

The Oceanus kit is rare as it includes two 20700 cells, which is a rare thing for kits to have. The mod has the Aetheon chip inside that enables variable wattage, bypass mode, and voltage mode. It can also power the mod up to 110W. The device has a simple, side OLED display and a three-button control configuration.

The VooPoo Rex is a single 18650 box mod with an 80W capacity and comes with the UFORCE sub-ohm tank. The mod has a simple, industrial exterior with its zinc alloy chassis that comes only in solid colors. There is a small OLED display on the front of the device that pairs with two side-mounted buttons to control the unit’s feature.

The Rex features the GENE.FIT chipset inside that can power it up to 80W as well as offer vapers safety protections. The GENE.FIT is also fire-proof and keeps the device free from dust and water. The UFORCE tank has a 3.5ml capacity and comes with two sub-ohm, mesh-style coils.

The Last Word on the Vandy Vape Jackaroo

Despite its less-than-fantastic name, the Jackaroo kit is not a bad box mod and tank setup. All vape makers now know how to make an (almost) indestructible mod (still waiting on that nuclear bomb test ; )) thanks to the innovation of GeekVape and now, Vandy Vape. The outer shell of the mod is soft and comfortable to grab. It is a hefty, hard-to-handle mod but the people who are in the market for a robust, sturdy mod would like that it has some weight to it.

Inside, the Jackaroo kit also delivers. The screen, while small, is brightly lit and well-organized. There were not so many strange, even-numbered button presses to perform to access the vape’s main features. The single-cell setup (only with the higher-capacity 20700 or 21700) works very well too, as it gives the mod enough power for decent clouds, while the mesh atomizer heads deliver a heady dose of flavor more so than other mesh-style coils and tanks. 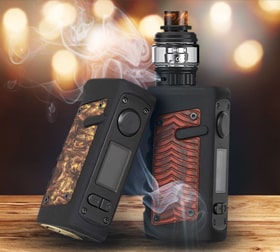