The SMOK Morph 219 W mod is a dual-18650 vape mod that sports a front-facing 1.9″ HD touchscreen. The mod comes equipped with the new IQ-S chipset that can power it up to its 219W maximum. Morph also has several different vaping outputs, including variable wattage and temperature control.

The chip enables a preheat function of either high, medium, or low. In addition, the vape kit comes with the new SMOK TF tank that can hold 6ml of e-juice and supports two sub-ohm, mesh-style coils that also come in the starter kit. The SMOK TF tank is top-fill, has stainless steel and Pyrex glass construction.

The SMOK Morph 219 could be mistaken for any number of other SMOK mods, like the Alien, Species, or the Priv mods. They both have the same rectangular shape, touchscreen, and side-firing button. However, the mod does sport a 1.9″ HD touchscreen that does look great.

The screen is bright and responsive and does not lag while inputting or enabling a function. The rest of the mod features a zinc alloy chassis with a resin-based backplate that can come in several colors, five, to be exact. There is a small USB port on the front of the vape, right under the screen, to charge the dual-18650s and install any firmware upgrades. 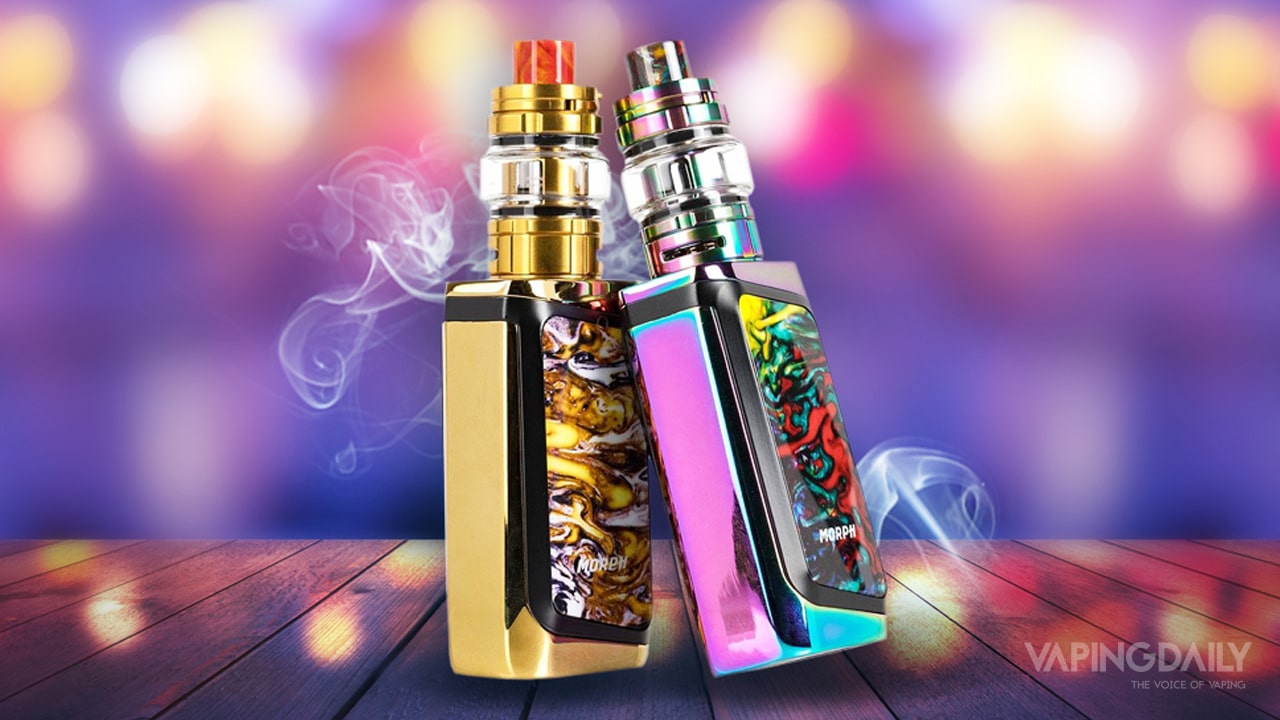 As of this writing, SMOK has not released any firmware updates, as the Morph is a relatively new device. There is a tiny locking key right above the firing switch, which locks the screen but not the firing switch. Users can still vape when the switch is enabled; they just can’t change their settings.

Another exciting security feature SMOK included on this chip is the passcode function. In the touchscreen menu, it’s possible to set a passcode to further protect the mod from being used by the wrong people (children). The feature seems more like a novelty than an actual benefit, but it’s something worth noting. 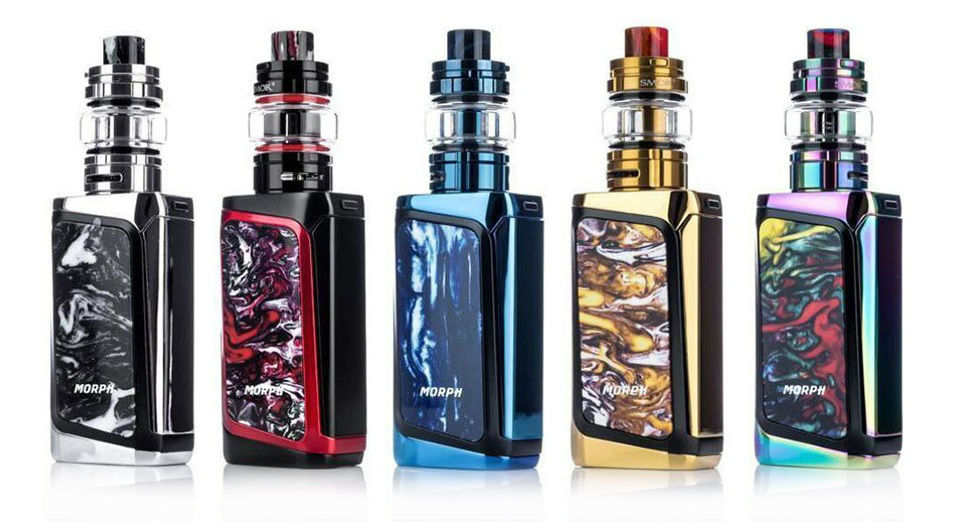 Up top, the Morph has a spring-loaded, gold-plated 510 connection. And its top plate measures well over 25mm, around 28mm (1.1 inches) in diameter, so it can comfortably fit wider mods. The two 18650 cells that power the Morph are loaded through the hinged, bottom-battery bay doors. Release a latch to open it, but the door clicks into place to close and stays pretty secure.

As the SMOK Morph comes in a kit, plenty of user accessories are loaded into each package. SMOK usually does an excellent job of outfitting their kits with many goodies, and this kit is no exception.

There is also a TPD version of the tank. It comes with a 2ml capacity tank and another standard EU version with a 5ml tank capacity instead of a 6ml capacity.

Touchscreens are invaluable in making box mod vaping all the easier. They eliminate the need for obsolete adjustment buttons and button combinations. But, for some reason, other vapers/reviewers prefer it over the ease of a touchscreen mod.

Anywho, a touchscreen mod is about as easy to use as a touchscreen on any other electronic vape. New devices have come a long way since the first ones though. Those early models like the Joyetech CUBOID or even SMOK’s G-Priv mod (even though it is not that old) were excellent. However, they still lacked the speed and functioning or a proper touchscreen.

The updated G-Priv and the new Morph have pretty much solved the problem of slow, unresponsive touchscreens. In addition, the main menu screen (after an interesting moto message appears on the boot-up screen, “The Space Miscegenation”) features a pretty standard setup.

From this main menu, it is pretty straightforward on how to access and use the rest of the mod’s options. The side menu has four distinct options: Mode, My Mode, Puff, and Setting. The temperature control mode is available for nickel, titanium, and stainless steel. It’s possible to set the already-mentioned preheat mode at either soft, normal, hard, or Max.

The My Mode option function is a memory option to input preferred resistance, wattage, the name of e-juice, and the nicotine strength of the e-juice. So the mod can remember those specific settings.

The screen also lets fool around with non-vaping-related features like the screen color, the brightness, and the wallpaper. There is also the option of setting the passcode. Finally, as mentioned earlier, it prompts security questions like logging into an online bank account.

The SMOK TF tank with those new mesh-style coils promises the same savory flavor and cloudy goodness that other mesh coils claim to provide. By and large, the coils, as well as the tank, deliver on that promise.

Like with most SMOK tanks, the machining and build quality of the tank is remarkable. It looks and feels reliable, well-designed, and is very easy to use and fill. They even made it so that the coils are plug-and-play instead of using 510 threads.

This tank comes with a raised coil base to soak the coil longer in the glass bubble section. The tank features stainless steel and Pyrex glass in its build, as well as an 810-Cobra resin drip tip that looks pretty badass as far as drip tips go.

Although some reviewers have mentioned, they got a 510 instead of an 810 drip tip. It may have come with earlier versions of the mod (like the one I reviewed). In addition, there is a massive, bottom, adjustable airflow vent that runs around the length of the base (almost). And the top-fill part of the tank features the SMOK method of the push-back top, which locks in place with a latch, so it does not come free by accident. 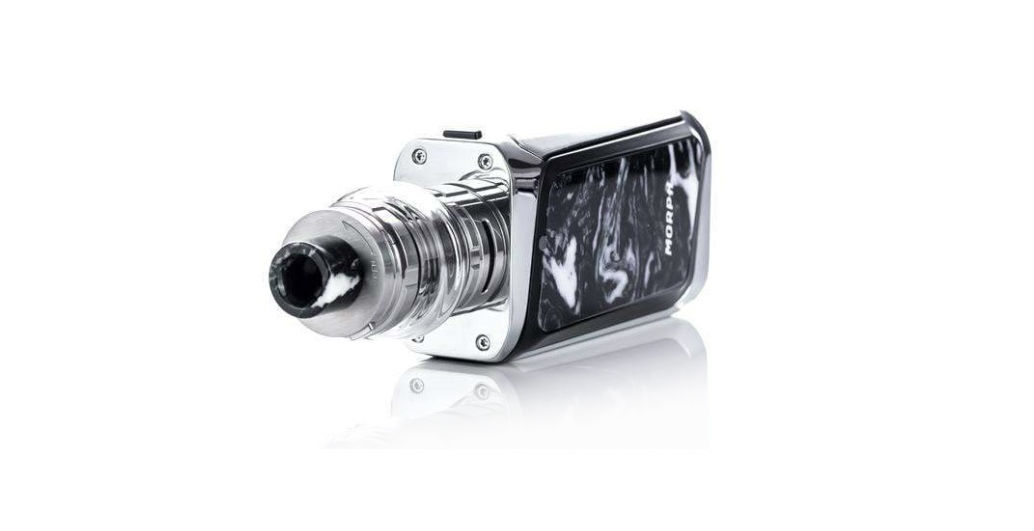 The 0.25ohm BF-mesh coil comes pre-installed, and it vapes best between 60-70W, while the full range of the coil is 30-80W. Of course, that range does not even approach the Morph’s 219W maximum, but other coil options are available for the TF tank and all the other TFV tanks in SMOK’s lineup, including a ceramic MTL coil which SMOK has never released before. 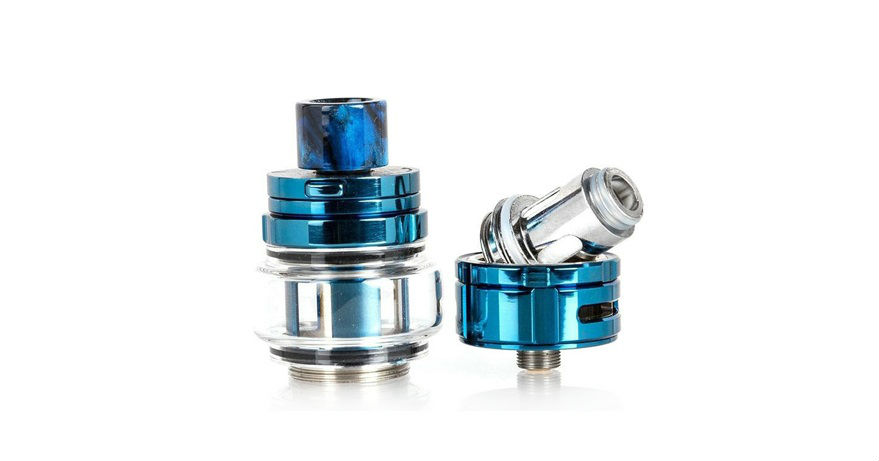 As for the vapor, the mod and tank work wonders together. The 80W maximum for the BF-Mesh coils is more than enough to get the most out of the coil design. Vaping at lower levels, like 60 or even 50W, still produced that smooth, effortless draw, as well as a great deal of cloud cover.

The Competitors: the SMOK Morph 219W vs. the Vaporesso Polar vs. the SMOK G-Priv 220W

The Vaporesso Polar is a dual-18650 mod that features a 2″ TFT (not a touchscreen). And it carries the new Omni 4.0 board that enables such functions as the custom curve modes and its 220W output. 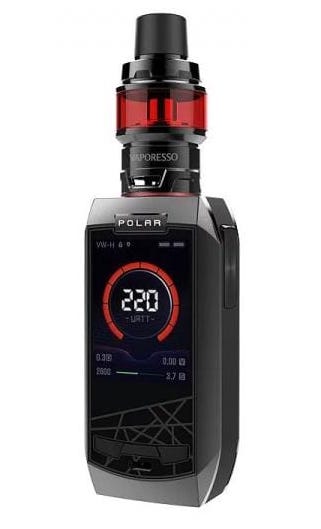 The Polar stands at over 144mm (5.6 inches) with the tank. The tank in the kit is the Vaporesso Cascade Baby SE tank that has a 6.5ml e-juice capacity and uses sub-ohm GT mesh coils.

The SMOK G-Priv 220W mod was one of SMOK’s original touchscreen mods. It is a dual 18650 device with variable wattage and temperature control as its main vaping outputs. The mod’s chipset also enables the preheat function common to most SMOK mods now.

The mod’s 2.4inch touch-enabled features an LED screen. The G-Priv also came with the TFV8 Baby sub-ohm tank. The G-Priv measures about 85mm (or 3.3 inches) tall and can fit atomizers well above 25mm (or 0.9 inches) in diameter.

Conclusion: The Last Word on the SMOK Morph 219W

The SMOK Morph 219 W follows in the footsteps of other, not only touchscreen mods but also SMOK mods. It has a similar shape as many other SMOK mods and a similar side-firing button. Yet, the user interface is much better than previous SMOK attempts at a workable touchscreen.

They seem to have perfected their mods capabilities though, as this screen is one of the easiest ones to use. It is seamless how easy it is to switch between modes, lock the settings, or do anything else on the Morph’s bright, easy-to-navigate screen. 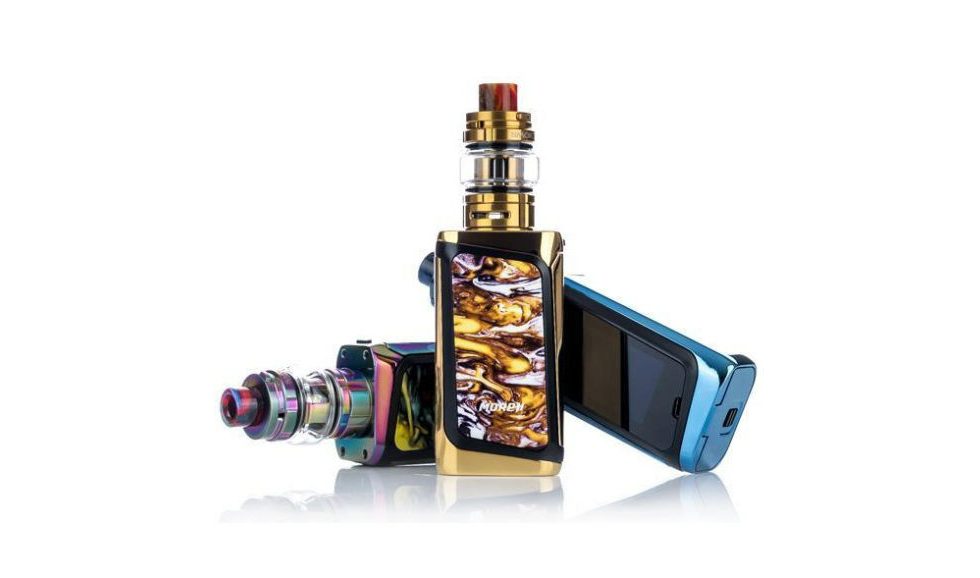 Rarely do SMOK devices and tanks falter in their mastery of vapor production. Since everyone seems to be jumping on the mesh-coil bandwagon, the BF mesh coils for the TF tank are superb. They are very smooth on the draw, and the flavor quality is also excellent.

It would have been better to see more vaping-related features added to the board. For example, a passcode feature to lock the mod is cool, but adding another vaping output (bypass or curve) would’ve been much better. But overall, the Morph 219W and the TF tank make a good match for anyone who loves SMOK devices or touchscreen mods.

Do you think touchscreen mods are still cool? Were they a fad, or are they here to stay? Do you prefer the user interface of a touchscreen or a typical button configuration? Let us know your thoughts in the section below.