Eleaf and I got off on the wrong foot. I was not enthralled by the first device of theirs that I reviewed, the Eleaf iKuu, a powerful, but an underperforming device. The iKonn was next, and the less said about that, the better.

But Eleaf turned things way around with the BASAL, a gorgeous-looking, MTL box mod that was a dream when it came to style, portability, and flavor-making. Ever since the BASAL, I’ve held Eleaf in high regard, so I was looking forward to reviewing another low-wattage box mod, the iStick Kiya.

I received the iStick Kiya as a stand-alone device, although it does come paired with the Jui tank in a starter kit, but can also come with any of Eleaf’s tanks and atomizers. The iStick Kiya is a single-cell device, and its battery capacity comes in at 1600mAh, which is significant for a maximum 50W device. 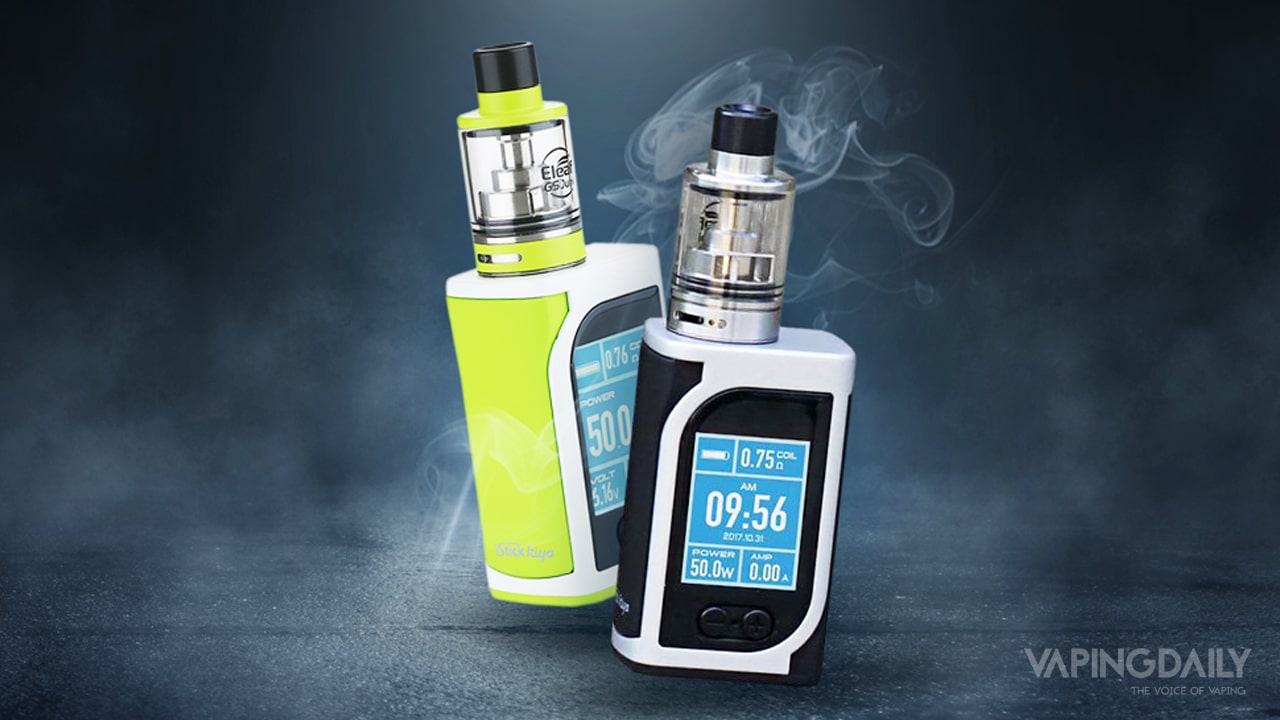 The exact measurements on the iStick Kiya are 57mm in height, and 35mm in width, if you need to get all scientific. But despite the iStick Kiya’s small size, the majority of the front of the device is taken up by the 1.45inch (or 36mm, so almost half the height of the mod) OLED screen, which is not the only aesthetic feature of the mod. 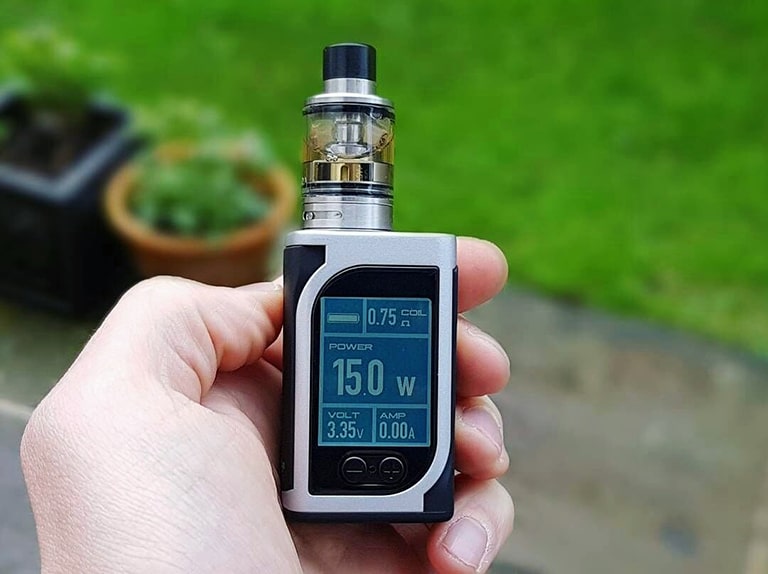 The Eleaf iStick Kiya is, in general, very well-made and well-designed. It only has three color options, black, stainless steel, and green, and I would strongly recommend getting the green version.

But anyway, the green version includes an all-green side firing panel that responds amazingly well and has the right amount of pushback you don’t have to worry about it being overly sensitive (the iStick Kiya does come with a key lock function anyway). Two selector buttons sit underneath the brightly colorful OLED screen and are black to match the inlay.

The overall feel of the device was satisfying. I was able to palm the device and its rubberized coating made for a secure hold. The back panel was similarly suited for a no-slip grip thanks to the textured indentations throughout.

Eleaf chose to go with a bottom USB charging and upgrade port, but that’s fine with me. It’s a tiny mod, but the Kiya can still accommodate a maximum 25mm-in-diameter tank.

Taking a Spin with the Eleaf iStick Kiya

Take note, all you manufacturers who are still making crowded, jumbled up OLED displays that read out way too much information and are hopelessly drab and lifeless: the screen on the Eleaf iStick Kiya is how it should be done.

What a gorgeous screen! The display is jubilantly bright and alive with color mixes. The menu sections are displayed with confidence and rigor, so there’s no mistaking where you are on the menu and what you are doing.

To operate the device you just need to click the firing panel five times. The main screen is beautifully compartmentalized with all your essential vaping readings, like variable wattage, coil resistance, and battery life, sectioned off in their own little nooks for clear comprehension.

Three more clicks will take you into the vaping menu, where you can choose from an array of onboard features like a comprehensive temperature control package for nickel, titanium and stainless steel, as well as TCR mode with three memory settings. You can even make use of the Eleaf iStick Kiya as a mech mod if you choose to go with the bypass setting.

The secondary menu features more personalizable options that you can easily change or modify depending on your tastes. There is a timeout, preheat, and clock feature all easily accessed through the simple-to-use menu system.

The Eleaf iStick Kiya: The Vape 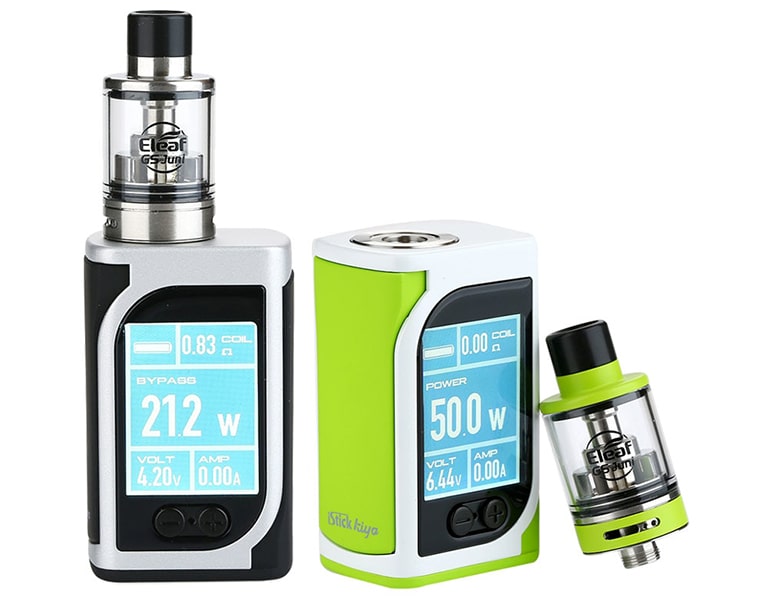 Now, I didn’t get a tank paired with my iStick Kiya so I went looking for a suitable, preferably MTL apparatus that wouldn’t let me down in the flavor department. I decided to look up my new friends at VaporFi, who have been hitting nothing but net when it comes to their latest vape mods.

I went straight for VaporFi Volt 2 tank and the SSOCC 0.5ohm atomizer that I had gotten when I reviewed the VaporFi V-Grip even though I never used it. The iStick Kiya has two resistance ranges for when it is in temperature control and variable wattage mode that range from 0.05ohms to 3.5ohms.

I stuck with the variable wattage mode and locked in my coil’s resistance at 0.5ohms. I kept it in the VaporFi family by using their fantastic Winter Wonder Wafer e-juice that I had never tried before, and so I decided a low-wattage device was the best choice.

Aesthetically speaking, the Volt 2 tank was an excellent choice to use with the iStick Kiya. It was also a great idea, vapor-wise. I felt like I was vaping the equivalent of Bing Crosby’s rich and soothing baritone, every time I took a great, big haul.

The Volt SSOCC 0.5ohm coil was a perfect choice, as well, since it vapes best at a recommended range of between 15-60W. I got nothing but incredibly potent in flavor clouds that did not fog up the place but were significant enough that they scratched my itch for cloud cover.

Stacking Up the Eleaf iStick Kiya

Looking through the roster of comparable wattage devices, I landed on a little device that I had almost forgotten about the Wismec CB-60, which was a perfect mod to make a comparison with the Eleaf iStick Kiya.

When I reviewed the Wismec CB-60, it came with a mouth-to-lung coil and tank, the Amor NS tank and the WS03 1.5ohm coil and it performed admirably well. Only, it took its status as a starter kit much too seriously and eliminated a whole bunch of vaping outputs.

The iStick Kiya opted to take the other route and offers a wide-range of versatile vaping options. So while the performance of the two devices is on a similar level, I think the iStick Kiya takes the day over the Wismec CB-60 for its versatility and vaping flexibility.

The iStick Kiya being similar in size to an old-school matchbox makes it one of the smallest box mods to date. And even with a tank attached the iStick Kiya can still disappear in your hand.

This is here more because I couldn’t find anything I didn’t like, but this is something a lot of vapers will not like.

I liked the iStick Kiya from the moment I saw it. The straight-edged design may not be the most impressive, but the color scheme and simple layout, not to mention the sturdy side firing panel were all winners with me.

Just like iJoy set the standard with battery versatility and squonk bottle builds, Eleaf has now become the standard-bearer of large, well-organized, beautifully displayed OLED screens for all your essential vaping variables.

Not only was the big, OLED screen literally in your face, but the way you used it, along with the way all the information was displayed was as easy as apple pie; navigating the mod’s menus could not have been easier.

Eleaf impresses again. They really outdid themselves with the slimmed down, cosmopolitan BASAL and they have again with the iStick Kiya. It’s an awesomely portable and inconspicuous mod that delivers a great combination of mouth-to-lung and direct lung vaping.

The 1600mAh battery ensured at least a full day of hard-core vaping. And with looks this good, I would happily take the Eleaf iStick Kiya with me everywhere I go.