I think this is the first time Eleaf iKuu i200 Vape has come across my desk. Again, another company with an excellent reputation for quality mods and tanks, most notably the well-traveled Melo 4 tank, which comes included in this kit.

The Eleaf iKuu i200 Vape has, well, 200W of output powered by a built-in 4600mAh tank. The built-in battery features a temperature protection system that allows you to charge while vaping but prevents overheating by stopping the charging process if the temperature gets too hot.

The mod also has an OLED screen that allows you to change your temperature settings and wattage modes easily. The Eleaf iKuu i200 Vape comes with the Melo 4 tank that has upgraded EC2 coils made of kanthal wire. 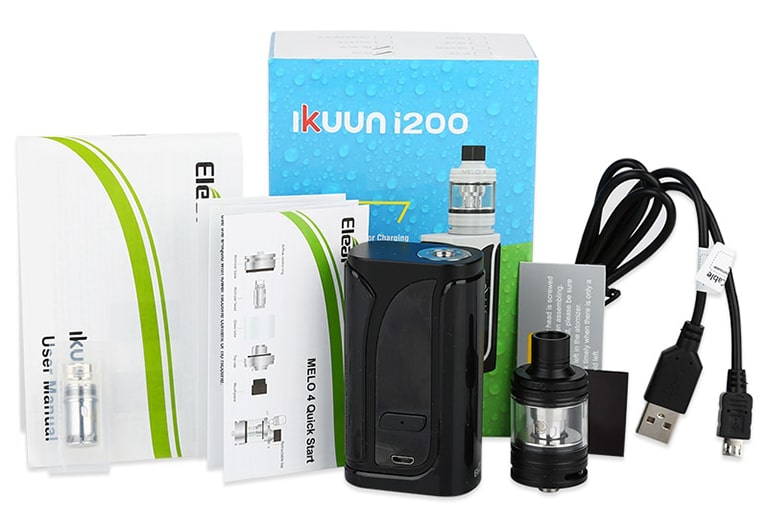 Here’s what you get in your Eleaf iKuu i200 Vape:

The Look at the Mod 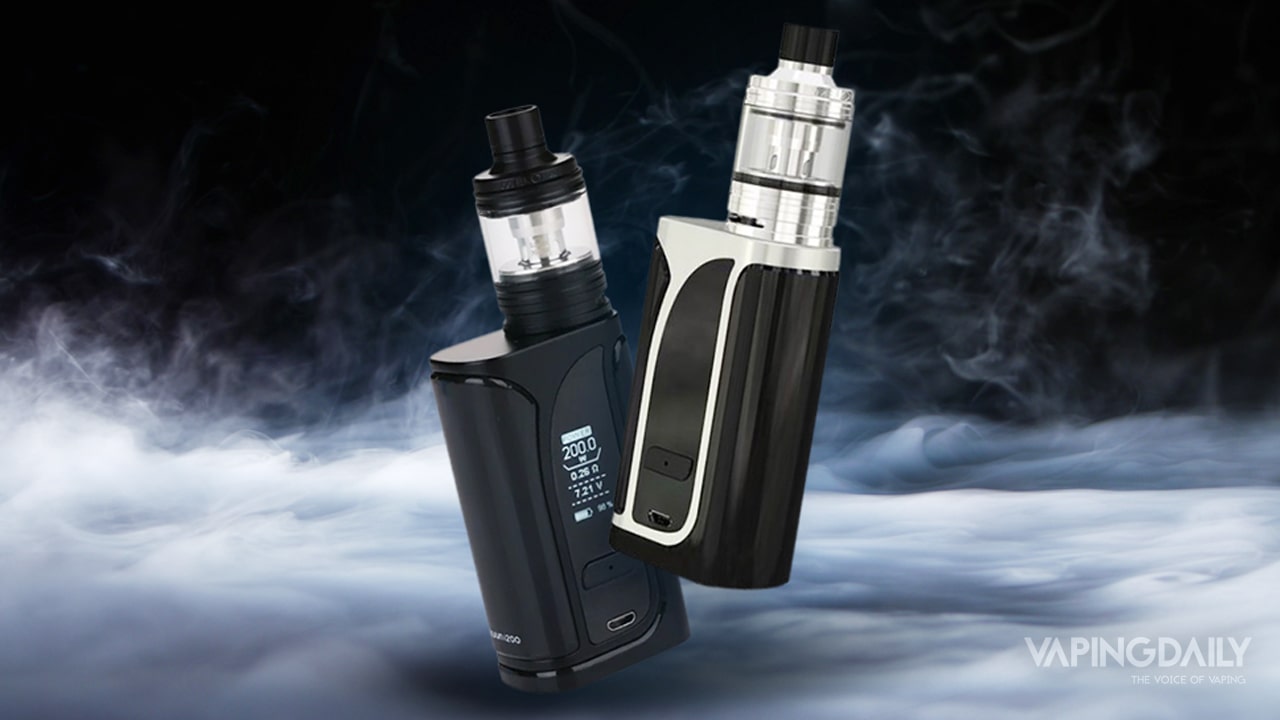 The Eleaf iKuu i200 Vape comes in a box with two levels. The top level contains the mod and the tank, and the rest of the parts are underneath. I immediately noticed the gold-plated 510 connectors on the top of the mod that can take tanks with a diameter of 25mm, which was also a feature of the i80 and makes sense given the variety of tanks that Eleaf produces.

The mod has a firing bar on the other side, which is becoming the standard for most new mods. And there has been some recent misfires (pun intended) with this type of firing bar, most notably with the SMOK X Cube II but this bar feels responsive without being overly sensitive.

You can press anywhere on the bar to fire the mod, but I found that the middle part was most responsive. The only other buttons on the mod are the selector buttons located directly underneath the screen (there is also reset button should the mod stop working). And under these buttons is the USB port for charging. 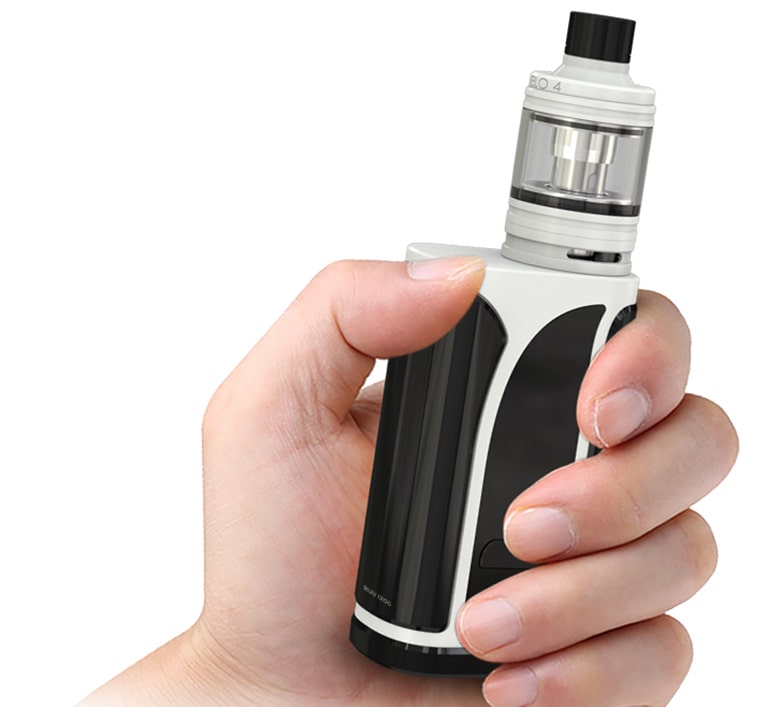 You can also plug in your Eleaf iKuu i200 Vape to your computer to install the downloadable firmware that Eleaf offers on its website. The screen has the standard readouts of most other box mods (temperature, wattage, the resistance of the coils). It is bright, but it is a little small although up-close the screen didn’t present too many problems.

The screen measures 0.96 inches. The rest of the mod has a mix of carbon fiber (at least they feel like carbon fiber) inlays to help with grip and is supposed to make the mod slip-proof although it felt slightly smooth with no texture. But in general, the Eleaf iKuu i200 Vape feels well-built, despite the abundance of plastic components.

With the 4.5ml tank attached the entire apparatus stands at about 126 mm and weighs a hefty, but understandable, 200g. The color or design of the mod isn’t anything spectacular in either of the six colors that it is available in.

The Melo 4 tank was something that I had used before that came from Eleaf. There were a lot of things I liked about it then, especially the dual airflow holes and the EC coils, but this tank is supposed to be an upgrade with kanthal coils instead of stainless steel.

This mod and tank combo is definitely made for sub-ohm vapers, and with the two choices of coils included in the kit, you can easily switch between vaping styles, since the resistance range goes above-ohm as well to as high as 3.5ohms. The Melo 4 has an easy to access fill port that you can use by slipping back the top cap of the tank, much like with the Big Baby tank.

The rest of the tank comes apart easily to get your excess e-juice stains out of there. You click the firing bar five times to turn it on and then the OLED screen lights up to show you the mod specifications. Moving in between the different modes requires three clicks of the firing button, followed by using the selector buttons to toggle between temperature control, and TCR mode.

Choosing each of the modes requires another click of the firing bar, which then allows you to choose between your different coil modes (nickel, titanium and stainless steel). Various other features can be accessed through the OLED screen including:

And these are just some of the features that you can access with the Eleaf iKuu i200 Vape.

Vapor Is All Around

A 0.3-ohm coil comes included in the Melo 4 tank, and either one of the coils in the kit is perfect for sub-ohm vaping. Using a wattage setting of somewhere between 40 to 70W, which is the recommended wattage range of the 0.3-ohm coil, I found I could get the right mix between huge clouds and even more immense flavor.

The temperature and wattage can be changed in increments of one, so perfecting your Eleaf iKuu i200 Vape is very easy with this mod. Taking the mod all the way to its limit of 200W seemed to me to be sacrificing flavor quality for the massive clouds I got. But in the end, it wasn’t worth it.

With that said, I still found the Melo 4 tank performed well. It didn’t exactly have a wide-bore mouthpiece, but then again, this isn’t precisely a mouth-to-lung device, so that wasn’t so much of a bother. It had sufficient airflow and allowed for easy adjustability.

Does the Eleaf iKuu i200 Beats the Competition

I thought mostly about the Aspire Archon 150W given its comparability to the Eleaf iKuu i200 Vape power output. And on a more superficial level, I liked the Archon’s distinct desire pattern that also houses two 18650 removable batteries, which is definitely a plus for me.

The Archon can also support a wide variety of tanks with its 510 connector spring. And despite the fact that the Archon can only get to 150W, I felt that was more than enough power to get a satisfying vape.

With its two batteries, the Archon also guaranteed a longer vaping experience than the iKuu. But then again, the Eleaf iKuu i200 Vape has 2A charging capacity that significantly reduces your charging time. So, purely because I liked the aesthetic look of the Archon (yes, I’m vain and superficial) I think I would take the Archon over the iKuu.

For a very powerful mod, the iKuu is very lightweight and portable. It fits easily in your hand, although I’m not sure I would take it anywhere with me. Of course, it is lightweight because of the dearth of plastic that is included in its construction, which presents problems of its own.

I just couldn’t understand why the coils would be made of kanthal wire and then have no compatible features on the mod itself.

Although this feature is now becoming standard with most new box mods, I liked how responsive, yet sturdy the firing bar was; it wasn’t wobbly or hard to use.

A mod like this, with no removable batteries, has, like the Replicants from Blade Runner, only a limited amount of time to them before they retire. So, it’s not something that will stay with you for a long time.

Overall, I liked all the different protections included in this mod. The temperature protection feature is the most prominent, but there is also short-circuit protection and overheating protection.

Mine eyes have seen the future, and it is the touchscreen. I’m done with button combinations and complicated menus that require a good amount of reading before you understand or can access all the different menu options.

For my first foray into the Eleaf family of box mods, I was pleased but not completely impressed. The Eleaf iKuu i200 Vape is a powerful mod, and it is small and lightweight. It pairs well with many different types of tanks and coil systems.

The menu and abundance of features were not exactly easy to get to or understand, and I wasn’t too interested in finding out all about them if they had no connection to varying my vape. The Melo 4 tank performed well enough, but I much preferred the classic EC coils that gave much better flavor and cloud production.

So I would say, keep the mod, throw away the coils.