The Laisimo F4 is a quad-18650 box mod with a belt-busting 41mm wide exterior. The Laisimo features a solid aluminum alloy build while it maintains the form factor of a small, square brick. Despite its wide berth, the mod is easily grabbed with its main control panel fully accessible.

The control panel consists of a bright 1.3” OLED that displays all important information, like battery level, wattage, and then some. The control panel also comes with a simple, three-button configuration with the oversized firing button above the OLED with an up/down combo right underneath.

A Closer Look at the Laisimo F4

The Laisimo F4 has a wide form factor given that it can hold four, full-size 18650 batteries. The battery door sits on the bottom and it uses a hinged, locking mechanism so users need to push to open it. The width of the device is a whopping 43mm (1.7”) so it is like two dual-18650 box mods put together.

As it contains four cells, battery ventilation is a must, which is why the tc box mod has strips of air holes along each corner of the device. There is also a Laisimo brand on the right side of the device that is backlit by an LED. Users can adjust the light of the LED via the device’s menu option. 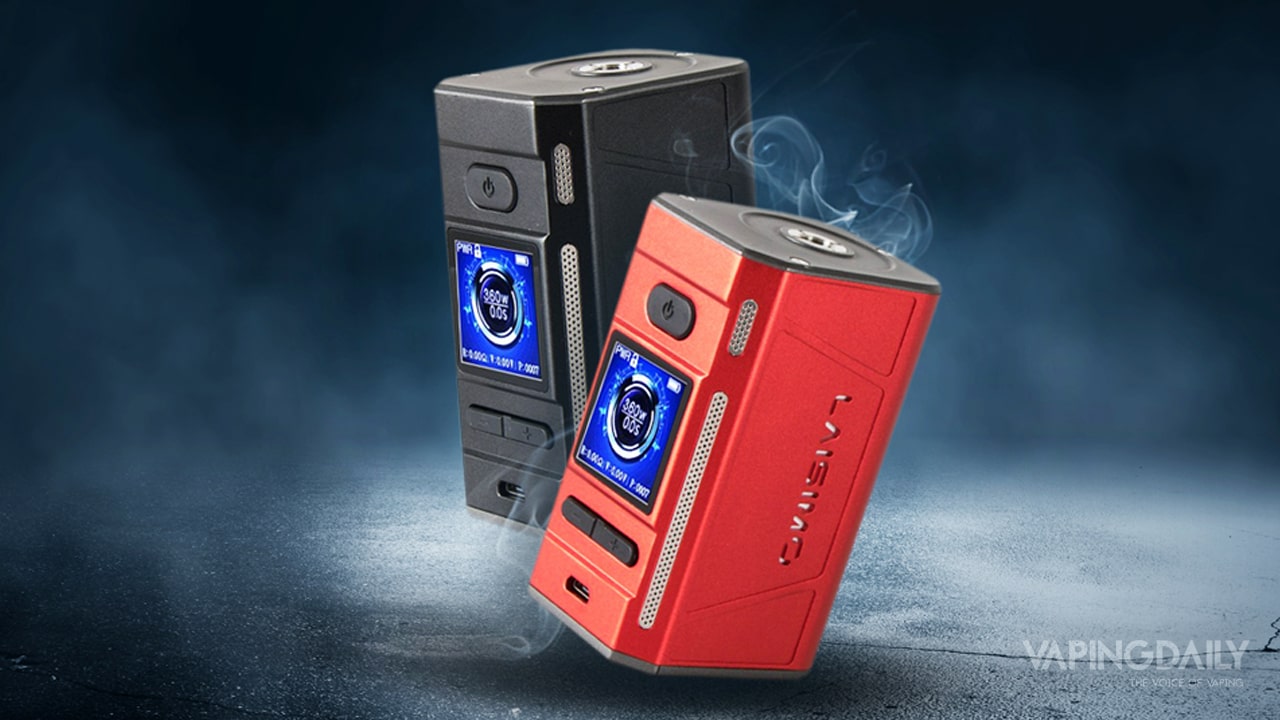 The OLED is also something to behold. It measures 1.3” and is a full-color screen. Combined with its size, the OLED is unmistakably bright and users should have no problem reading or navigating the menu system. The control panel on the Laisimo F4 is also straightforward. It features a top-power/firing button and two adjustment buttons under the screen.

The buttons are regular-sized and significantly raised off the F4’s aluminum alloy frame. They depress easily but are also sturdy and do not rattle. There is also a USB port underneath the up/down buttons to recharge the cells. Charging the 18650s via the built-in charge port is not always recommended, even with single or dual-18650s. With a quad-18650 device charging via the USB port is also highly not recommended.

A Look Inside the Box Mod

The Laisimo F4 comes as a stand-alone device as any accompanying tank would be too big to include in the kit. 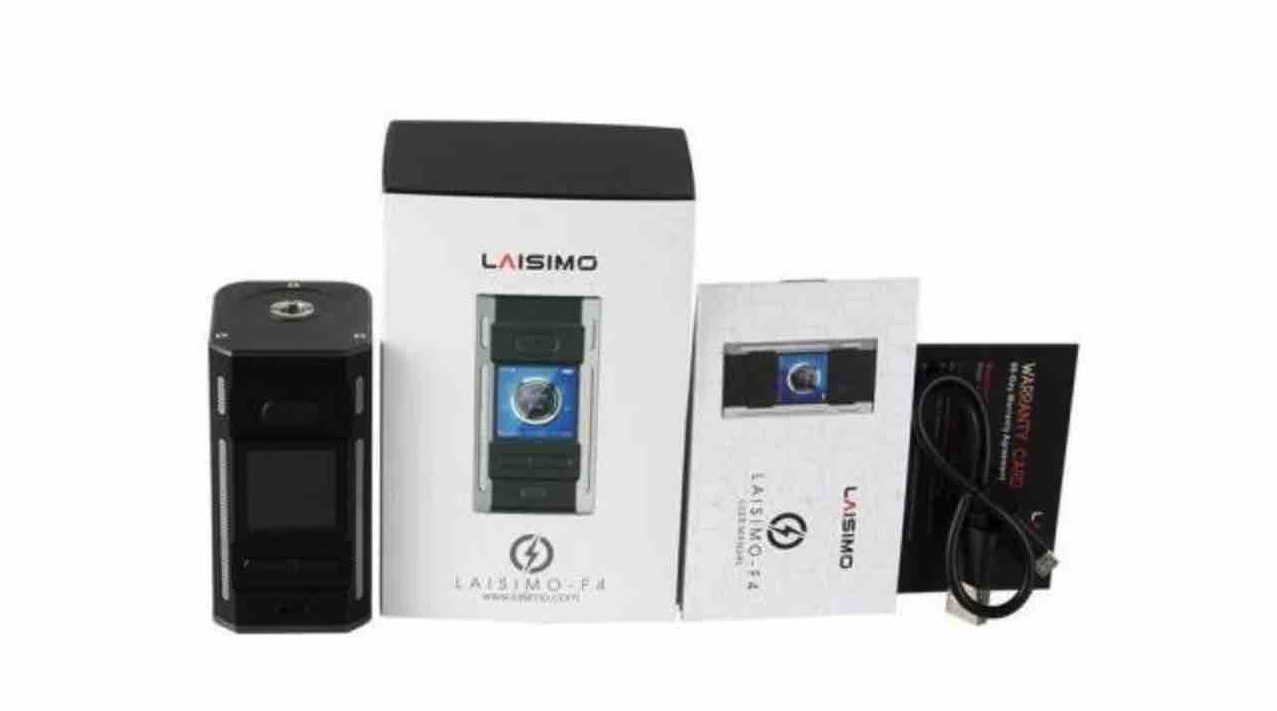 Still, there are many super-sized attys out there that vapers are dying to attach to the tc box mod.

The Laisimo F4 has a basic build configuration. It is a holder of batteries, basically, so it has nothing extra that would make it even heavier or harder to hold. It features a solid aluminum alloy build that feels thinner than most, but that is probably to make it less heavy to hold. There is nothing truly outstanding about the F4’s design.

It has an extremely wide body and the 510-plate up top can accommodate even giant attys like the Aromamizer Titan that has a 41mm diameter. With such a wide top, anything less than 41mm seems a little out of place, which is a shame because only the most die-hard vapers would have attys that big, while most only have typical 22mm or 25mm atomizers.

Still, the rest of the box mod feels sturdy without being too cheaply made. The device comes in four colors black, red, blue, and stainless steel. There is the Laisimo logo on the side that uses a rear LED and comes in several color options that are user-accessible via the mod’s secondary menu system.

The menu screens on the device are very easy to navigate. Thanks to the bright, massive screen users can easily find what they are looking for via the F4’s OLED. Users need only press the firing button three times to enter into the menu system, which shows the menu options in a vertical style.

The options on the secondary menu are as follows:

The Battery Power option gives users a visual representation of each cell’s battery life. The rest of the options are self-explanatory.

How to Use It

There have to be four batteries installed into the device first, to activate the mod. The mod’s high-power maximum is 360W. On the tc box it mentions 160W, but that is the highest possible output for the device in temperature control. The F4 360W limit is accessible via power mode. 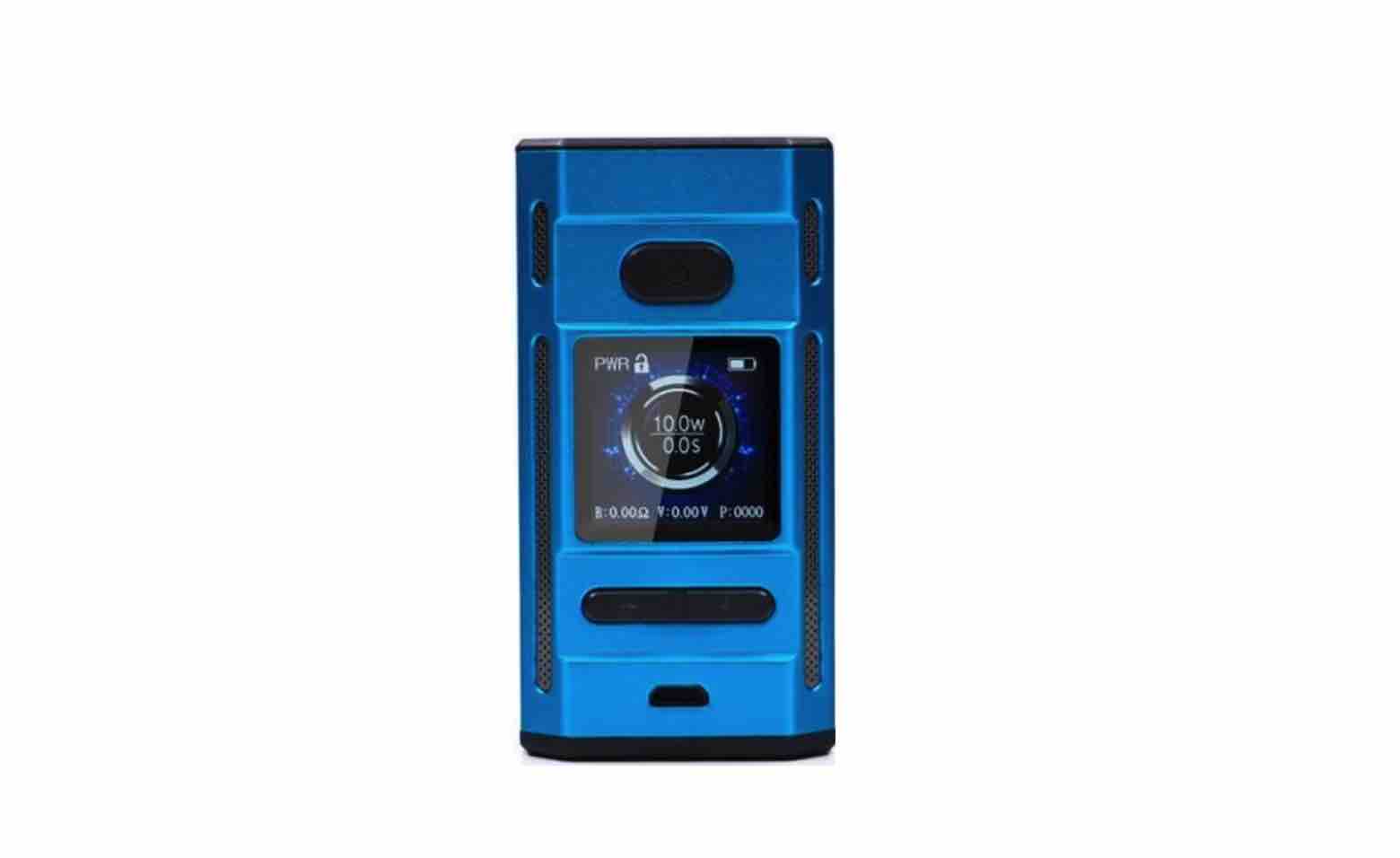 The Laisimo F4 is intended to be a multi-day vaping device. The size of the device, along with the battery life, along with the possibility to add a huge atomizer onto the 510 means that users can vape this thing for a long time. Of course, vaping at the maximum of F4 360W would drain the cells quicker, but for vapers who enjoy a 50-60W session or even as high as 90W, the device can last a good, long while.

The size, however, is also a downside. Unless users have a similarly oversized box mod, sticking a typical 22-25mm atomizer onto the 510-connection will make for an awkward pairing. As such, the F4 is aimed at vapers who vape all day and need a device that can keep up with their demands. The box mod is not for casual vapers, as its capacities are too much for a leisurely vaper to handle.

For hardcore vapers, though, this mod is a dream come true. The extended battery life and the option to attach a gigantic tank on top is a great combination for vapers who cannot put their device down and need something to vape all day, every day. As mentioned the four cells inside can power the device for a couple of days, at least, so it can keep vapers happy for a while.

The Vaporesso Luxe S mod and tank are a cutting-edge combination from Vaporesso that features mod with the brand-new Omni 4.2 board and a 9ml SKRR tank. The Luxe S is a dual-18650 mod that comes with a big, bright 2” TFT color screen that features touch-keys. 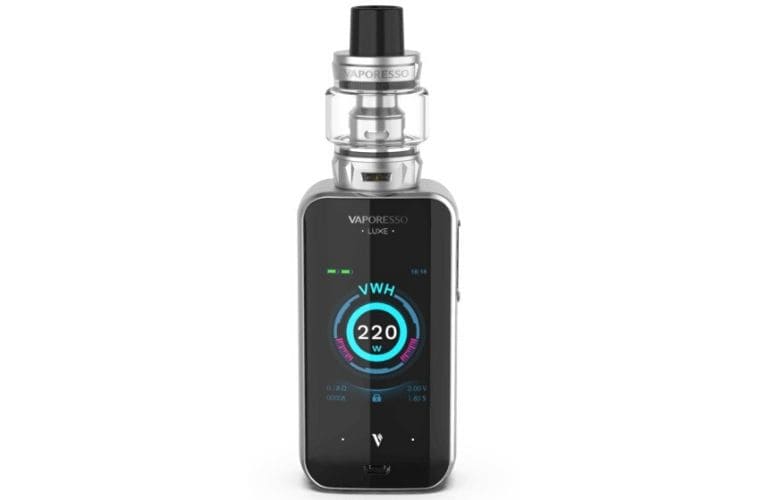 The device has a side-firing button and a slim 30mm profile while standing at just under 146mm tall (5.7”). The SKRR sub-ohm tank features a tank-busting 9ml e-juice capacity and comes with two new styles coils; a 0.15ohm Strip coil, and a 0.15ohm Mesh coil.

The Mig Vapor WTF mod and tank combine a mod with an internal battery and a tank with a 3.7ml capacity. The WTF mod features a built-in battery with a capacity of 2200mAh that can reach a high-power output of 40W. 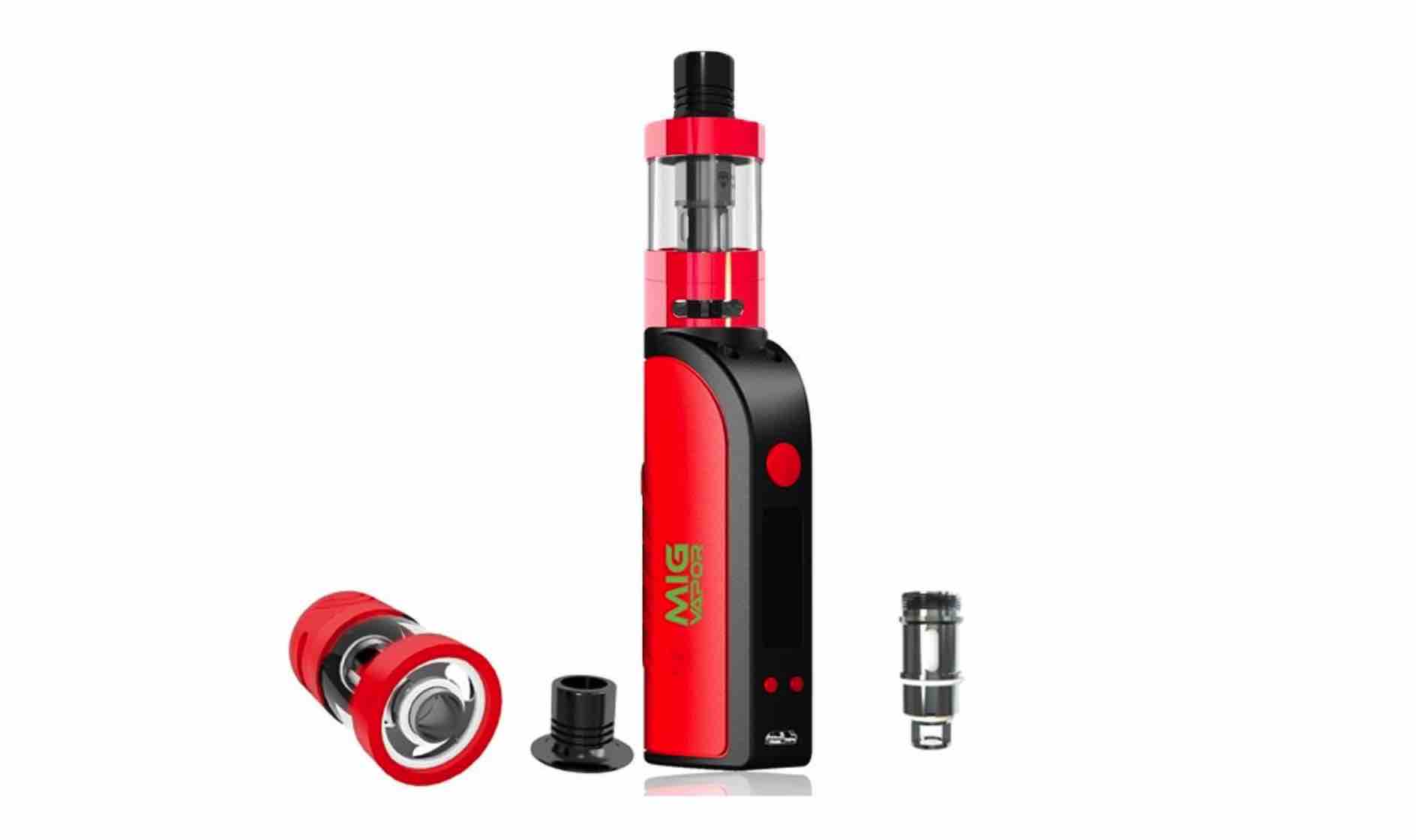 The device features a slim profile and has a width of only 22mm (0.86”). It has a 510-connection up top and a small OLED along its front. The WTF mod has three-button controls and features variable wattage and temperature control.

The Laisimo F4 is the device to get if you never want to put your mod down. The F4 is a daily driver that can keep up with even the most hardcore vapers. The quad-battery set up does affect the mod’s size and portability, but of course, this mod is more for home-use rather than being an on-the-go device.

The big, bright screen makes navigation easier and the simple controls are not difficult to get around. Despite its large size, the mod’s vaping options are not expert-level so it is also very user-friendly. With that said, however, casual or moderate vapers would not match well with this mod, as its out-sized capacities will be too much for them.

One comment on “Laisimo F4 Review: Vaping With the Big Boys”