The Eleaf iKonn 220W Starter Kit is the second device from the folks at Eleaf that I reviewed in so many weeks – the other being the Eleaf iKuu 200W – and right off the bat, there doesn’t appear to be much to tell the two devices apart. They both feature high-wattage outputs; they both have centrally-placed 0.91 inch OLED screens that take up the majority of the front panel; they both feature three-button controls; they both have spring-loaded 510 connector pins.

If I remember correctly, I wasn’t so impressed by the Eleaf iKuu. The performance, of course, held steady, but the button combinations on the dimly lit, hard-to-read menu left me frustrated. As well as the non-removable battery that tied the device’s life and longevity to its own. 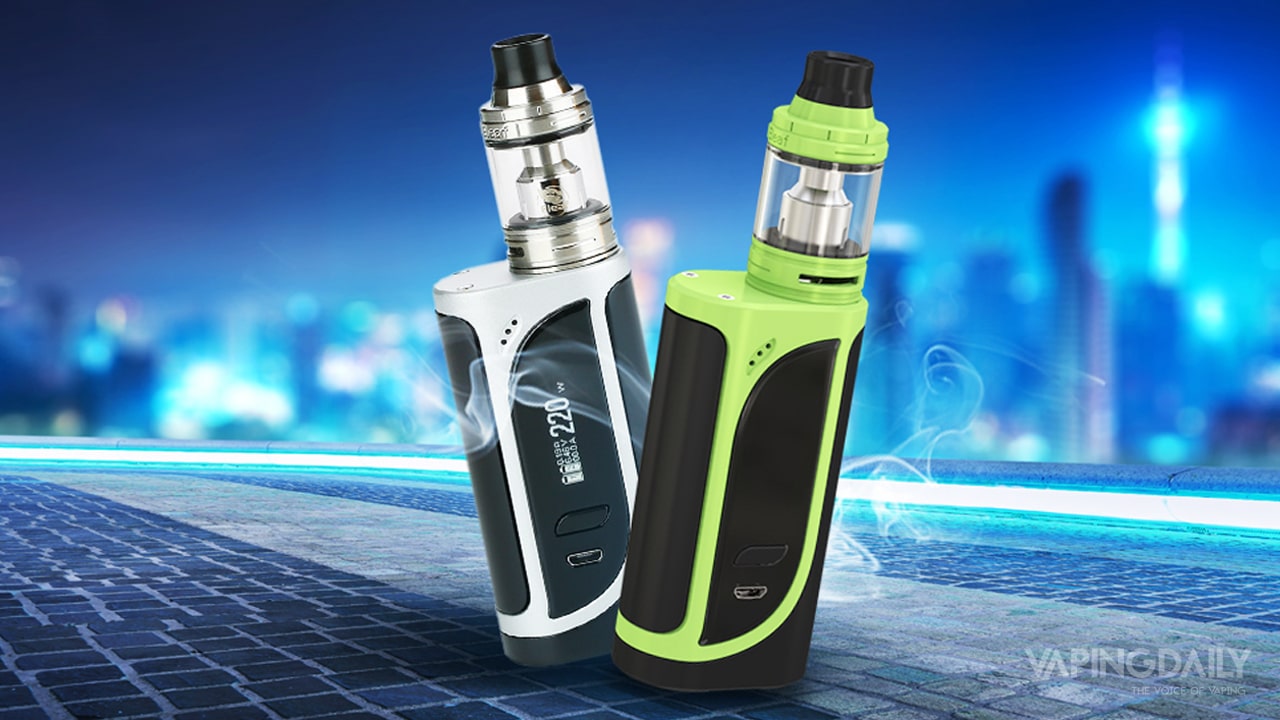 The Eleaf iKonn is powered by two removable 18650 batteries that are loaded from the base of the unit. The Melo tank that came with the Eleaf iKuu did have some good points, although it was not compatible with the maximum power output of the mod itself, which is not a con in and of itself.

A lot of manufacturers are guilty of that, but then again, it also allows you the option to attach your atomizer to the device. The Eleaf iKonn 200W starter kit comes with a new tank design, the ELLO tank that features a 2ml and 4ml option, a top-fill system, bottom airflow vents, and two coil options that feature both three and four cylinders.

What It’s Got For You

So, despite the light and airy greenery on the box the Eleaf iKonn comes in, the mod itself, at least the one I was sent, is a dour, serious all-black that immediately fell flat in my eyes. But taking a look at all the color options showed me that neither of them was particularly fetching.

But, alas. Here’s what you’ll receive in your Eleaf iKonn 200W Starter Kit:

As I already mentioned, the eye-catching part of the mod was noticeably absent from the Eleaf iKonn 200W mod. It didn’t jump up at you; not that a mod has to, but there has to be some effort on the manufacturer’s part to make their devices somewhat attractive, and that energy was definitely lacking on the iKonn.

It’s all black panels, and straight lines, and even more black inlays. Technically speaking, everything you expect to be on the mod is there: the 510 spring-loaded pin that can comfortably fit any tank up to and including 28mm; the firing bar, which was also a feature of the iKuu. The firing bar on the iKuu, I felt was a bit more responsive than the one on the iKonn.

There was a certain space, near the base of the mod, that when pressed did not result in the device firing. That kind of “dead zone” can be a good thing or a bad thing, depending on your preference. You may want a space on the bar where you can grip it without the device firing. But I liked the Innokin Disrupter’s firing bar that wasn’t sensitive but lacked any of these dead spots.

Depending on what tank you order with the iKonn, the 2ml or 4ml option, the entire mod, with the tank included will stand at close to 130mm. The 2ml option will be close to 120mm, so not much of a change in that department. 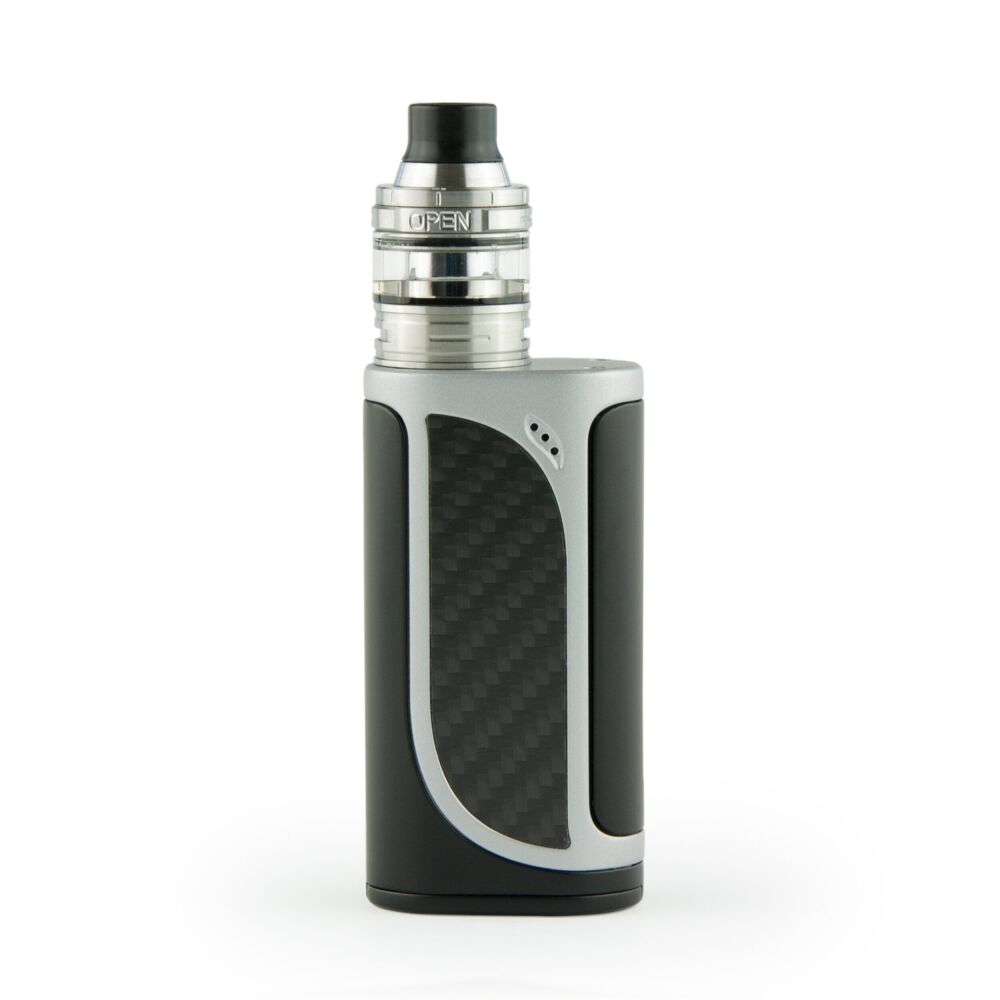 Portability-wise, the mod itself is neither weighty nor light. It sits somewhere in between. The fact that it takes two batteries adds to its heft, but the majority plastic build does keep it light. The OLED screen is similar to the iKuu’s, and in that respect, it’s smallish, but I thought the readouts were well-lit and well-displayed.

But something that irked me about the screen, as it has with many other mods, has been the sideways screen. Meaning you have to turn the screen onto its side to read it or to make adjustments.

And that means that your tank, if you have one attached, also gets put onto its side; putting my tank on its side whenever it’s filled with e-juice is something I’ve never liked to do. So, long story short, I would have liked to have an upright screen.

The ELLO tank has a very hard to remove drip tip, which is not such a bad thing if you are looking to keep everything in place. I am always wary of bottom airflow vents on any tank, but here we have two of them. The tank top cap has a helpful “open” imprinted on its lip, in case you forget how to open your tanks.

Pushing back the top cap reveals a too-small-for-my-taste fill port, which I found didn’t fully uncover since the top lid did not move all the way out, and blocked the hole just a little bit. The HW3 coil was a sight to behold, however.

Three cylinders make up the center of the coil head, all of them quite ample. There is also the four-cylinder coil head that also displays significant airflow potential.

I had problems with the iKuu 200 and the button combinations, as well as the inordinate amount of clicking I had to do to get to more of the hidden menu options on the screen. The same problems have transferred over to the iKonn.

To get to the software upgrade menu, you have to click the firing button twenty times. That amount of clicking is an immediate turn-off, especially given the extra effort required to download the firmware.

There are yet another ten clicks just to check the board temperature, which again, something not entirely useful or necessary unless you are vaping in bypass mode, which the iKonn doesn’t even have.

The rest of the vaping features on the iKonn however, are also time-consuming and difficult to access. You have the standard five-clicks-on/five-clicks-off. But the selector button is also supposed to work as a +/- button, although it is not marked as such, so you need to guess as to which button works as what.

The main menu on the iKonn displays the common voltage, wattage, amps and battery life of the two 18650 batteries. And again, fiddling with all the other modes or attempting to the change the settings or getting into any of the different styles is frustratingly hard.

The screen should have made more room to display all of these readings rather than limiting the information presented and then making it annoyingly hard to access or change any of these features. There are only two vaping modes on the iKonn, temperature control (for nickel, stainless steel, and titanium) as well as variable wattage mode.

Would I Vape It Daily?

I had also never tried the ELLO tank, nor the HW3 coils, but just looking at them I saw that they promised something different. The HW3 setup has three cylinders with the organic cotton lusciously pouring out of the cylinders just pleading to be juiced.

I used the pre-installed HW3 coil head first. I primed my coils, filled the tank and let it saturate for about twenty minutes before I turned on the device. The HW3 has a recommended range of close between 50W and 150W, so it can take an extra bit of wattage.

I started at closer to 60W and felt great flavor, but not so much cloud production. The clouds were somewhat vacant, and light. Sliding back down to 55W, I felt around the same amount of flavor and not so much vapor. I decided to turn back the other way and push the mod all the way to 100W.

And the difference was insane. The clouds were magnificent and made me think of what holy, celestial flatulence would look like. But like with most high-wattage devices, you sacrifice flavor in pursuit of letting off God farts. 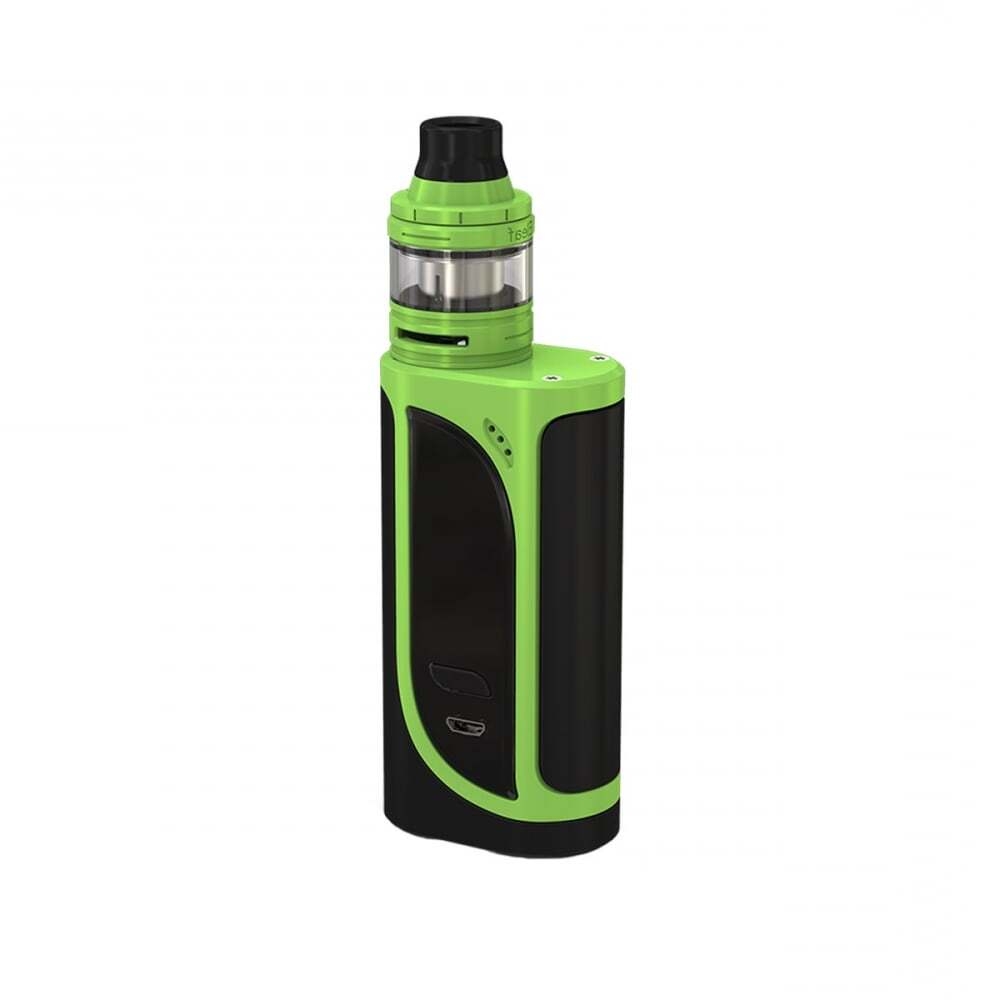 Eleaf even includes a card with the two coils explaining this very trade-off. The card shows how the higher-capacity coils, like the HW3 and the HW4, produce more clouds, but less flavor compared to the other coil options like the HW2 and HW1.

But there are no lower-wattage, or above-ohm coils available in the kit. The iKonn 200W does have a resistance range that does reach to 3.0ohms, but it’s not possible with the coils that come with the package.

Choosing the iKonn Over Competitors

Looking over the current stable of 200W devices that also double as starter kits, I was intrigued at how the Kangertech KBOX would square up against the Eleaf iKonn 200W. But, at this point, I’ve been so disappointed by the Eleaf iKonn 200W Starter Kit that a chimpanzee smoking a cigarette and blowing smoke into my face would impress me more.

So, I will take this opportunity to extol on the features of the much better-performing, smarter, more portable and easier to use Kangertech KBOX. The KBOX also has two removable 18650 batteries, but a much more intelligent chipset that reads the coil type of whatever atomizer you attach to the mod.

The KBOX has a much slighter build, a simple to use three-button interface with a smaller OLED screen than the iKonn but it still doesn’t have as many confounding button combinations as the iKonn.

The KBOX is excellent for portability and can reach the same wattage level as the iKonn. But it does so in a much better-looking, versatile package that you can also update with downloadable firmware. Ding! Down goes the iKonn.

The fact that the Eleaf iKonn 200W can chuck clouds is not a pro for me, but I couldn’t think of anything good to say about this mod other than that one redeeming feature. I’m not a cloud-chaser myself, but for those of you who are, the Eleaf iKonn might worth checking out.

The Eleaf iKonn 200W is as plain as a pair of socks. There was no attempt to make it even slightly attractive, aside from the carbon fiber sticker (sticker!) attached to the back panel. The different color options were no help either since they copy the same design pattern.

The cloud production on the Eleaf iKonn 200W was partly due to the coils cylindrical construction, which were well-machined and had very porous cotton wicks.

I thought the Eleaf iKuu was bad, regarding its button combinations and menu options, but the iKonn manages to top its brand-mate. The iKonn needs ten, even twenty clicks to get to specific menu options and displays.

The small screen doesn’t display enough information, and this dissonance between the lack of buttons, the lack of readings but the high amount of functions is for lack of a better word, a disaster.

The ELLO tank was new to me, but its parts were a little too snug, and hard to remove, which leads to a bit of over-exertion, and over-exertion can then lead to broken pieces because you pulled so hard on them and they crack or inadvertently get thrown across the room.

Vape It Or Not

It’s not sexy or exciting or playful. It has nothing worth considering as redeeming. It chucks clouds pretty well, but that’s it. It’s difficult to use with all its confusing button combinations and a screen that doesn’t display nearly enough information.

I wasn’t impressed by the Eleaf iKuu, but I was willing to give Eleaf another shot. But, they wasted their opportunity.