I guess we’re not done with putting colorful LED lights on mods to give them that extra (superficial) difference that has absolutely no impact on the vapor production of a device. I can’t vape the LED lights, so why are they supposed to appeal to me?

Can we all agree that LED lights on box mods should end, like neon bike shorts, or capri pants? I’m just bothered by their complete lack of relevance to an overall vaping experience.

Even though some companies have enough foresight to add the option of turning the lights off completely, like SMOKTech, the Hindenburg of box mods, the Pioneer4You IPV Velas had the distinct feature of incessantly torturing you with a festival of flashing lights that you could not turn off.

Fortunately, we can include the designers at Fuchai in the group of intelligent mod designers, since they did add a shut-off option for the LED band that wraps around the base of the Fuchai Glo 230W box mod. Why they included that band in the first place is another question.

The Fuchai Glo 230W box mod is the first device I’m reviewing from the Sigelei offshoot, and it is a starter kit that comes with the Sigelei SLYDR M sub-ohm tank and two coils options that range in resistance from 0.4ohms to 0.2ohms. 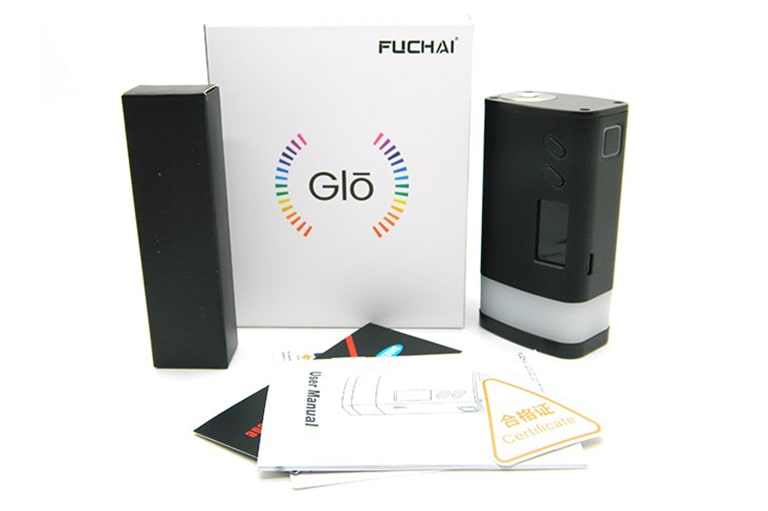 Too Much of the Glo

The Fuchai Glo is one ugly mod. Any reviewer who has been saying the Fuchai Glo 250W is “beautiful” and “streamlined” must either be blind or have been bought off by special interests.

The Fuchai Glo is the very opposite of streamlined. The buttons are all over the place and have different designs. The OLED screen is tiny, and is jam-packed with so much information and displayed terribly with ancient-looking fonts and numerals. And there are no labels or company logos on the actual box mod, although there is a “Fuchai” brand on the SLYDR M tank.

And the addition of the LED band that encircles the entire box mod was yet another blunder to make the Fuchai Glo one of the ugliest box mods I’ve ever seen. The firing button is alone, on the side of the mod, and there is only space that separates it from the USB charging port on the same side.

The selector buttons and OLED screen are on the side of the mod, just a little above the LED band. The buttons, again, share no similarity to the firing button, which has an LED square around it, while the selector buttons have no such illumination.

The mod takes two 18650 batteries that are bottom-loaded. The battery door opens and closes thanks to the magnetic plates it connects too. And it has a 510 connector pin at the top, which is not saying much since every single box mod on the market has one of those.

The SLYDR M sub-ohm tank fares much better in the looks department at least, in that it looks pretty much like every other tank out there. The SLYDR M is a top-fill tank with a push-back top cap that reveals your fill hole. Although it is a top-fill tank, the SLYDR M has two bottom airflow vents.

The tank has a confounding capacity of only 2.8ml. I didn’t understand why the tank wasn’t given either a precise 2 or 3 ml capacity, instead of an arbitrary 2.8 ml capacity, why 2.8 ml exactly? 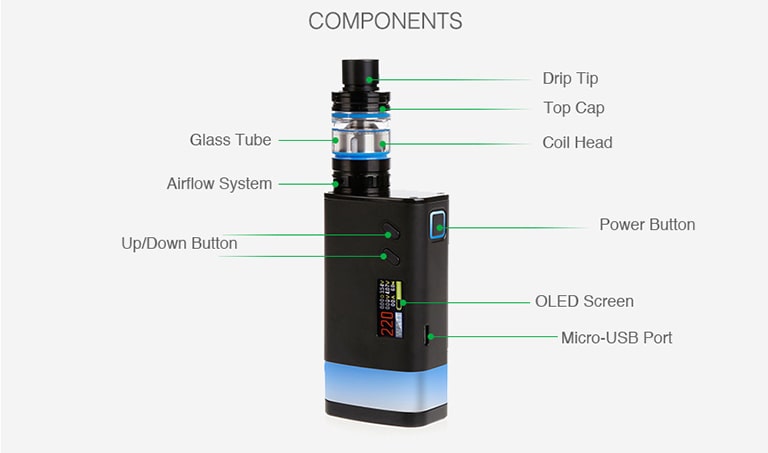 Once you’ve gotten over the plainness and offensively bad-looking Fuchai Glo 230W mod (it is, it should be mentioned, somewhat thick and cumbersome to hold). You click the firing button only three times, to get the mod started.

The OLED screen, as I mentioned above, is overflowing with too much information packed into a tiny, thumbnail-sized screen. And the display is just horrendous. There are too many different colors; again, the very opposite of streamlined, with the battery level indicator a yellow color, while everything else is either blue or grey. These colors can be changed, however; I think those colors were the defaults.

The main screen displays everything essential about your vape, from wattage to resistance, to amperage, voltage and all of that is overstuffed into a screen much too small to present all that information conveniently.

The vaping modes on the Fuchai Glo, despite its supposedly “innovative” chipset, do not push any boundaries. You have the basic temperature control, TCR mode, and variable wattage mode. One distinct feature that the Fuchai Glo does have is the preheat mode that you can access by holding the power button and the up button on the mod.

A preheat mode is not a bad mode to have given that you can get to your ideal vaping wattage faster and conserves your battery life. What does not save your battery life is the LED band on the mod, which it seems you can customize more than you actually vape.

The menus on the mod split between a power mode and a color mode. The color mode lets you adjust the duration of one particular color (red, green, or blue), which to me had no inherent vaping value whatsoever. I feel I should also mention that the O-Rings in the SLYDR M sub-ohm tank also light up, and the kit comes with O-Rings in different colors.

How I Vaped the Glo 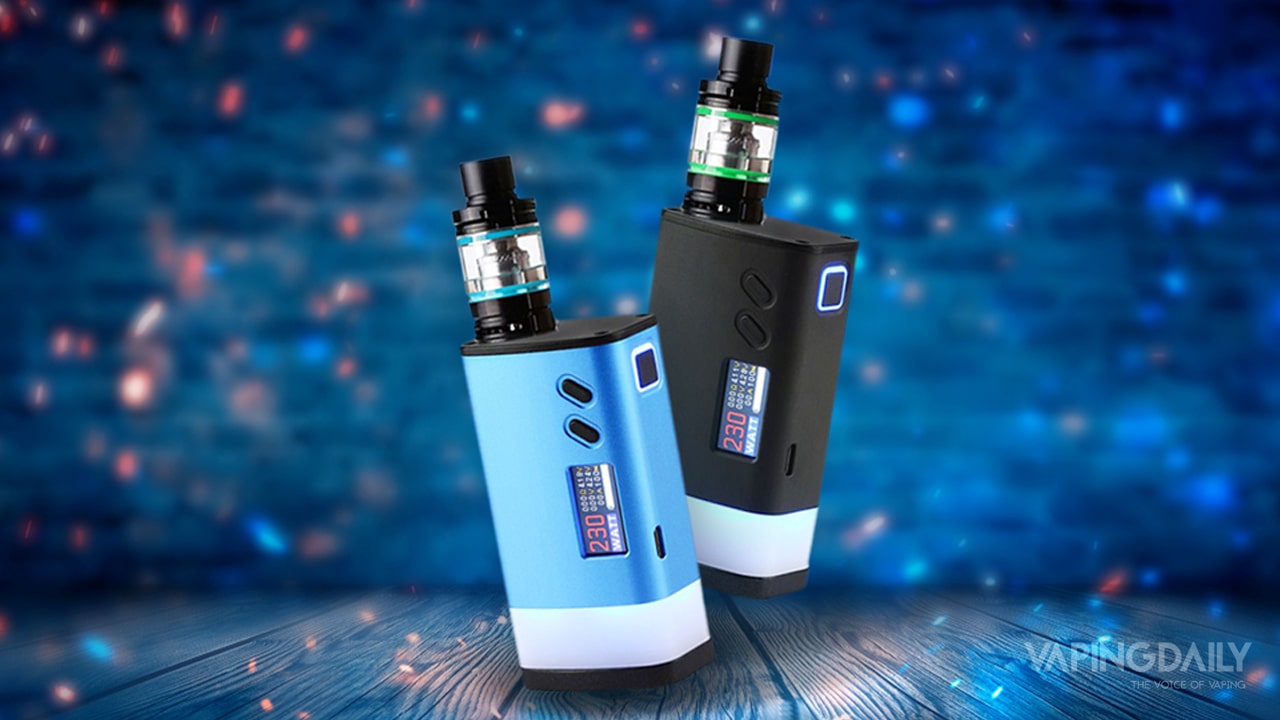 All mods can be forgiven their trespasses on the eyes should they perform well at creating great, big clouds that taste great. But I guess that’s not the hurdle to be crossed anymore.

Vapor production is now the easy part in creating a great mod, and once you’ve loaded a mod with the essentials like a high-power output and a compatible coil and tank system, then it comes down to distinguishing your machine from all the other ones out there on the market.

And it seems that Fuchi decided to add LED lights to the Glo much like Reebok decided to add a pump to their shoes (shout-out to the 80s!) as its distinguishing factor since the vapor production capabilities of the Glo do not stand out so much.

This was my first time using the SLYDR M sub-ohm tank, which was easy enough to fill and has all removable parts, and fortunately comes with a replaceable glass tube. The bottom airflow slots have a rotating, ball-bearing system that lets you control your airflow precisely.

I used the pre-installed SM6 coil head that vapes best between 40-120W, so it doesn’t come anywhere close to matching the mod regarding its potential. I got big enough clouds, pushing 80W, and then 90W, all the way up to 120W where the clouds were steam-engine sized.

The flavor was good, not so crisp and well-defined, although, with the 0.4ohm SM2 coil head, there was more potential for a character at around 70W or even 50W. But again, the mod is awkward to hold.

It wasn’t heavy, but the positioning of the buttons, with the firing button on one side and the selector buttons too far away to be reached by my index fingers (at least for my small hands) was a negative for me.

The Fuchai Glo 230W Starter Kit Comparing to Others

I thought I’d take a second look at a much better-looking and better performing 200W device, the KBOX from Kangertech. There’s no competition between the two devices, at least in the looks department.

The KBOX is the definition of streamlined and uniform. It’s one-color, hard-shell, aluminum chassis with “Kangertech” beautifully stenciled onto its side is eye-catching and modern. There is also the fantastic “K” logo made up of pinpoint holes that also act as ventilation for the battery are just some of the ways the KBOX rises above the dull, mishmash of the Fuchai Glo 230W.

And, fortunately, apart from the OLED screen, the KBOX does not have any other LED lights. The KBOX is perfect for portability and durability. It’s much smaller than the Fuchai Glo, and yet it fits better in hand. The KBOX doesn’t skimp on power since it is also powered by dual, removable 18650 batteries that don’t translate into making the mod heavy or thick.

Get the KBOX. Contest over. It’s a better-looking device, and the 30W power output advantage that the Fuchi Glo has does not compensate for the idiotic LED band and the fact that so much was wasted by paying so much attention and detail to this one asinine feature.

My Score of the Fuchai Glo

Are we in agreement then? No more (superfluous) LED lights on mods anymore?

After the disaster that was the Pioneer4You iPV Velas and its tortuous parade of lights here is yet another device whose only real defining feature is the LED light band.

And what’s even worse is that the lights have a level of customization that the vapor production does not have (save for the preheat function, and the standard temperature control settings), which to me, is a hangable offense.