Do you want the maximum customization regarding airflow control? Then, the Wotofo Sapor Top Airflow RTA is one of the best RTAs available on the market. Its compatibility is practically universal and presents a well-balanced performance range with great emphasis on flavor.

To grab the Wotofo Sapor Top Airflow RTA at the lowest price of $29.99 enjoy the free shipping. Order it directly from the manufacturer’s website.

What Exactly is an RTA?

A Rebuildable Tank Atomizer with a deck containing posts, which has a sealed metal chamber cap as a cover. Around it, you will find a tank reservoir for e-liquid. They keep it down in the tank with pressure and gravity. It is then directed up through slots or channels on the outer circumference of the deck. The chamber cap attaches to a chimney that lets the vapor flow to the drip tip. They placed the wick ends in the channels which soaks up the e-liquid. Then, the device deliver this to the coils for vaporization.

The Wotofo Sapor Top Airflow RTA is available in either a 22mm or 25mm version. In addition, it has an overall streamlined aesthetic. It presents clean lines and it comes off with a softly rounded drip tip. The contemporary, sophisticated design looks extremely elegant. As a result, the sleek finish ensures the RTA will look good with virtually any mod. The Wotofo Sapor shares the deck with many other recently released RTAs. Therefore, you’ll instantly recognize it if you had any experience with RTAs.

The kit comes in a neatly packaged gift box with an anti-imitation checking label. Inside you will find:

How Difficult is it to Build?

Many vapers will be familiar with the dual-coil designed deck. It utilizes a standard Velocity-styled deck with four 2mm post holes and leads secured by grub screws. It is easy to coil as they designed the Velocity decks for centering coils using very little effort. 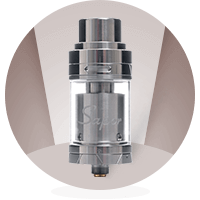 The Wotofo Sapor RTA’s deck is big enough for 3mm inside-diameter single core coils. In addition, the four wicking ports are 6mm half circles with a removable wick ring. The user will achieve success in wicking if they make sure that the wick tails adequately fill the tops of the slots. The user will also need to allow very little wick tail to extend below the wick ring.

The device is easy to build, even for beginners. The juice flow-control aids in top filling and the ability to adjust the juice going into the chamber.

One of the greatest features of the Wotofo Sapor Top Airflow RTA is the unique top airflow. This eliminates any changes of e-juice leaking. The Sapor RTA retains the same airflow concept as the Sapor RDA. You can find the airflow control ring below the top cap and six dual adjustable 8mm x 2mm air slots in the top of the chamber. This way, the air flows over the tops of the coils, rising through the chimney stem, through the drip tip.

At the base of the chassis, you will find indication markers. This is for the user to be able to accurately position the airflow above each half of the build deck. Inside the chamber, each of the two posts measures 2mm in diameter.

If the Sapor RTA is properly wicked, the RTA will not flood or leak. Even if the user hears ‘’gurgly’’ sounds while drawing, none of the e-juice spills onto the mod.

When it comes to flavor, the Sapor is top of the range when it comes to RTAs. The airflow may be tighter, but the Sapor generates impressive clouds of vapor. You can adjust the airflow from a direct to lung hit, to a mouth to lung style.

The Wotofo Sapor Top Airflow RTA is easy to fill, because of the top filling design. The user will know when it fully closes when you turn the tank clockwise. This way, the juice flow control tightens and stops when it’s fully closed. Simply unscrew the top cap and fill the atomizer. The dual slots accommodate any e-juice bottle tip or dripper. Close the top cap and turn the tank section counter clockwise to open the juice flow control.

What do we Think About the Sapor Top Airflow RTA?

Are you looking for a tighter draw and increased capacity? Then, you will find the Wotofo Sapor Top Airflow RTA perfect. The leak-proof design is especially appealing, which the top airflow creates. The unit’s size is compact, but there is ample building room for even the most seasoned techies. Furthermore, the system is easy to use, and the flavor is on par with what one would expect from a high-end RDA system. The company made this affordable system, expertly, from high-quality materials. It comes in two versions. You ask what got our attention? It’s the Wotofo Sapor Top Airflow RTA’s high-quality flavor release and overall consistency in vapor production.

For the lowest price and free shipping, get your Sapor Top Airflow from Wotofo’s very own online store.

December 5, 2017
From Geek Vapes comes the Griffin RTA that features a Velocity-style deck, a 3.5ml capacity, and whole mess of spare parts. Read our review here.

May 17, 2017
The iJoy EXO RTA is the answer to the Ammit RTA and Merlin Mini RTA. Is it worthy to be in competition with these two great tanks? We think it is. Read on.