The Vandy Vape Kensei RTA: The Hottest Tank to Get This Year

The Vandy Vape Kensei RTA 24 mm rebuildable tank atomizer has a staggered height build deck with honeycombed airflow and expanded liquid capacity. Excellent flavor and cloud production is the result because of the airflow, large wicking cutouts, and the position of the coils.

The tank also has a knurled adjustable airflow control ring and a removable cap that makes refilling easy. Included with the starter kit are two 810 drip tips and a 510 drip tip adapter. This RTA is well made, utilizing one of the best and most intuitive airflow control systems on the market.

The build quality and the design of this tank are outstanding. The machining in this tank is the first thing anyone will notice because the different parts hold together without any rattling or play. Additionally, there is no leaking if enough cotton is put into the ports. 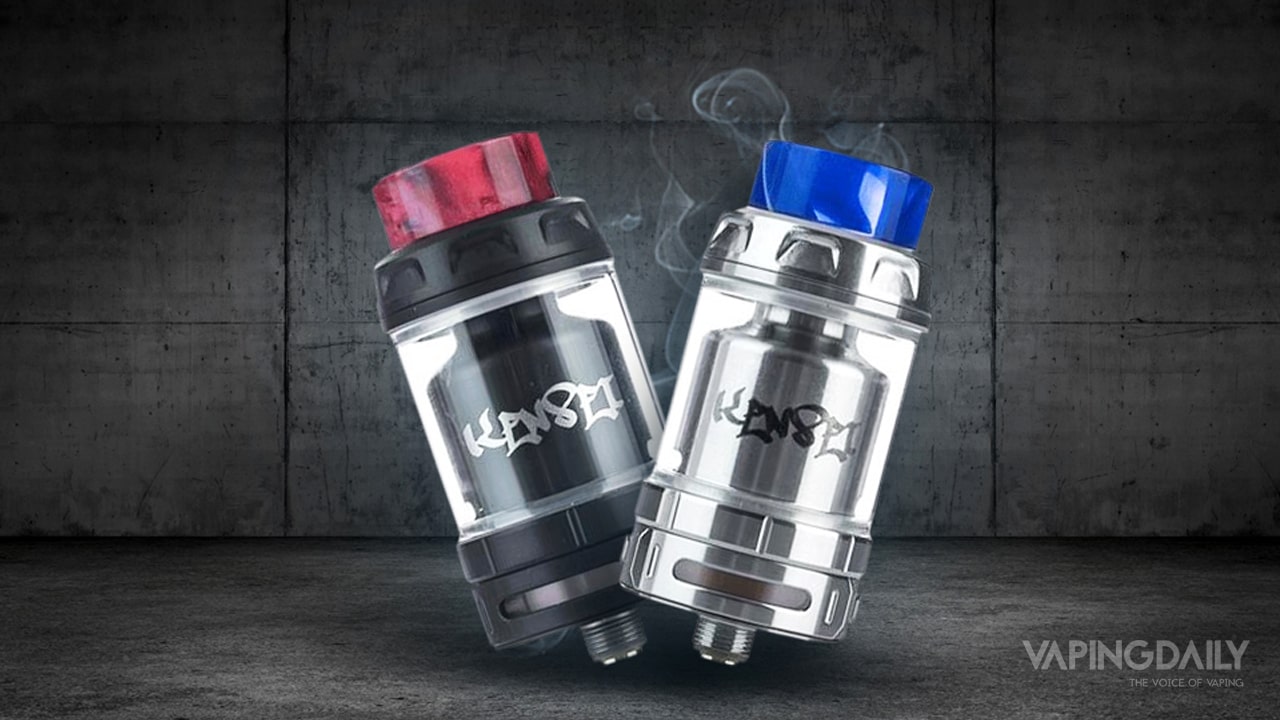 Two glasses come with the starter kit. One is a 2 ml standard, while the second is the 4 ml Vandy Vape Kensei bubble glass. The bubble tank is large enough to handle several hours of vaping before needing to be refilled. It is the best extra in the starter kit.

The build deck is well made. It is 24 K gold plated, and it has two posts with two terminals each and a step down in the center. The beauty of the design is that the terminals do not obstruct the wicking material. The wicking ports are on the sides of the posts, and they are positioned toward the center, so one port has two wicks.

This feature makes space for the honeycomb airflow. The honeycomb holes are located beneath the coil, resulting in outstanding airflow and flavor. Finally, the tank uses Phillips head screws that come in and out quickly.

Coils will last a long time if they are primed and broken in properly. The most accurate estimate is that they can last one to two more weeks than usual. After the coils are installed, start by getting rid of all the hot spots. Doing this will ensure everything burns evenly. Afterward, wet the coils and juice ports with nicotine liquid, and then insert the wicking.

The wicking also has to be primed with nicotine liquid to avoid dry hits, which can damage the coils. Allow several minutes for the liquid to absorb. Following these steps will ensure that the coils last several more weeks than average.

How to Use the Vandy Vape Kensei RTA

This is the best RTA for building because the process is so simple. The step down centered in the middle of the deck is the main reason. It enables the user to clip the leads without having to move the coils. Besides cutting the wires, all there is to do is make sure they are centered over the honeycomb holes. Next, wick the cotton through the coils, trim the cotton, and guide the ends toward the bottom. Insert the ends into the port on each side.

The drip tip fits into the top cap perfectly. Just push it in or pull it out. The top can screws on and off, revealing the refilling ports, which are large enough to top the tank off without causing a mess. The tank has juice flow control that can be adjusted by turning the top cap. The AFC ring is at the bottom beneath the glass. Rotate it back and forth to get the desired airflow. To disassemble, unscrew the base.

The Vaping Experience of the Vandy Vape Kensei 24 RTA

The vapor production and flavor are phenomenal. Tightening the AFC halfway or more brings out the flavor when vaping on lower wattages. All kinds of juices were tried in the tank, and the internal build always accentuated the taste. Leaving it open provides big direct-to-lung hits. Expanding the tank capacity does not lower the quality of the flavor whatsoever.

The ability to expand juice capacity without sacrificing flavor quality is one of the best things about this RTA. Vapor production is high, too. While it may not produce as much vapor as tanks made for cloud chasers, it still is high enough to satisfy the average vaper. Also adding to the vaping experience is this tank’s 510 compatibility. It can fit nearly any vape.

These two rebuildable tanks from Vandy Vape are well made, so it is hard to choose one over the other. They both have excellent airflow, vapor production, and flavor. The Triple II has a few advantages over the Kensei, though.

One, it handles single, dual, and triple coil configurations, while the Kensei only supports single and double coil builds. Another considerable difference between these tanks is that the Triple II can hold up to 7 ml of juice compared to the Kensei’s 4 ml.

The Voluna RTA is an excellent flavor tank, and Asmodus did a lot of things right when making it, but the Kensei 24 is slightly better. One, the Kensei’s airflow is better because it can do direct-to-lung hits.

While the Voluna produces excellent flavor, again, the Kensei does that better, too. Also, the Voluna only holds 2.5 ml of liquid, and it does not include an extension. Finally, the Voluna has some leaking issues, and the Kensei 24 does not.

Flavor chasers will not find a better rebuildable atomizer this year for the price. The combination of excellent flavor, build quality, and ease of use make the Vandy Vape Kensei RTA a superb choice. It is highly-priced, but considering the overall quality of the design and build, the extra money is worth it. It would have been nice if the knurling was done a little better, and the extension could have been larger, but all-in-all, this is an excellent tank.

Do you want to say something about the Vandy Vape Kensei RTA? If so, do it! Leave a comment so your voice can be heard. We appreciate well-informed comments from our readers.