Dead Rabbit RDA Review: A Well-Designed RDA by the Hellvape

The Dead Rabbit RDA is a postless-deck style rebuildable atomizer that measures 24mm in diameter, (0.4 inches). The Vapin’ Heathen, the popular YouTube vape reviewer, had a hand in designing this atomizer by the Hellvape. The RDA features an all-stainless steel build, as well as four, elevated, diagonal posts.

The top cap has diagonal airflow vents that point down toward the deck to prevent leakage. The kit comes with a 510 squonking pin so vapers can use it as a squonking RDA. 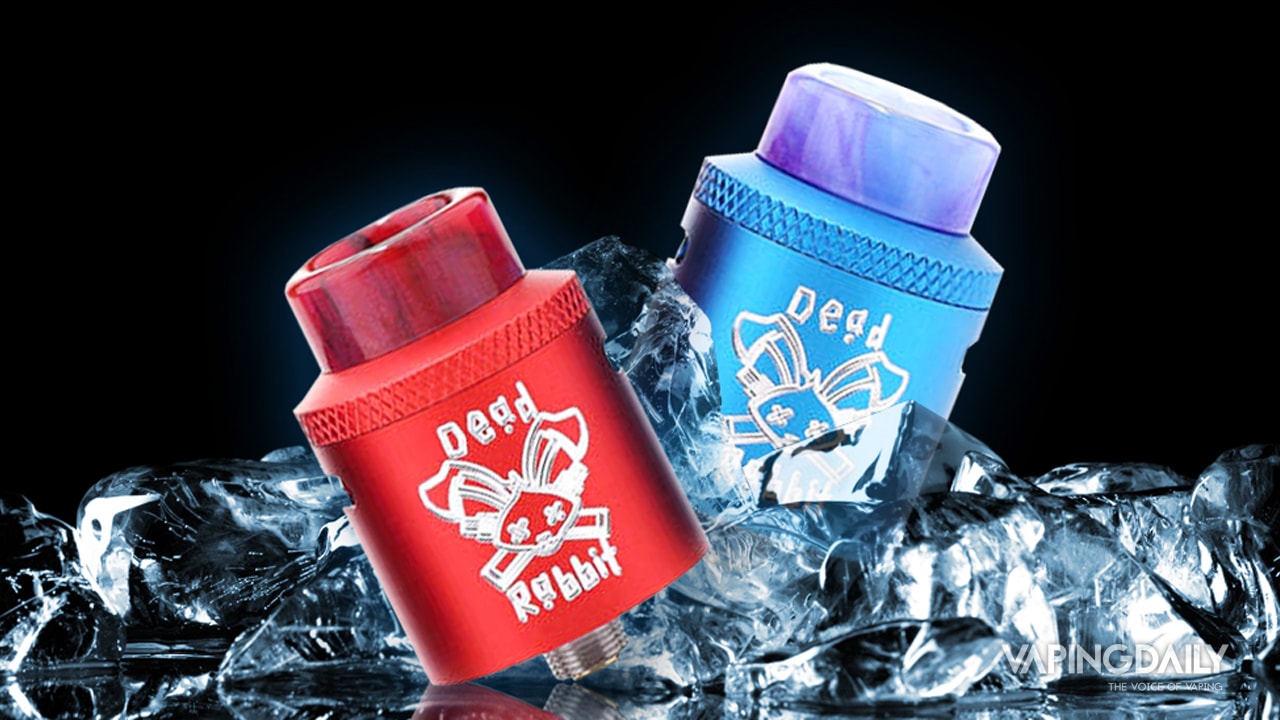 All Dead Rabbit RDAs comes in a hard-shell case and includes the following:

The Vaping Heathen has given a lot of background on what went into the RDA’s design. He wanted to make a rebuildable that was easy to build on that had good airflow and did not leak. A lot of the RDA’s configuration holds true to those goals.

What most people notice about the vape is the placement of its airflow vents. The vents, on the top cap, are at the top, but they angle down toward the build deck. The arrangement of the airflow holes prevents e-juice from leaking.

Leaking is a problem with atomizers that have bottom airflow vents. E-juice leakage is even more of a hassle for squonkers. The Dead Rabbit RDA has an elevated build deck, which is unusual for an RDA.

This design feature is another personalized touch from the Heathen. The deck is set above the base so that vapers can install their coils from above, and snip off the leads from the bottom. The two connectors also sit atop a PEEK insulator.

The post holes are large enough (2.4mm/0.04 inches) for users to drop their leads into the openings. Then, secure them with the hexagonal screws (there are also slotted flat-head screws in the kit). Another thing about the atomizer that had to conform to the Heathen’s taste is the drip tip. 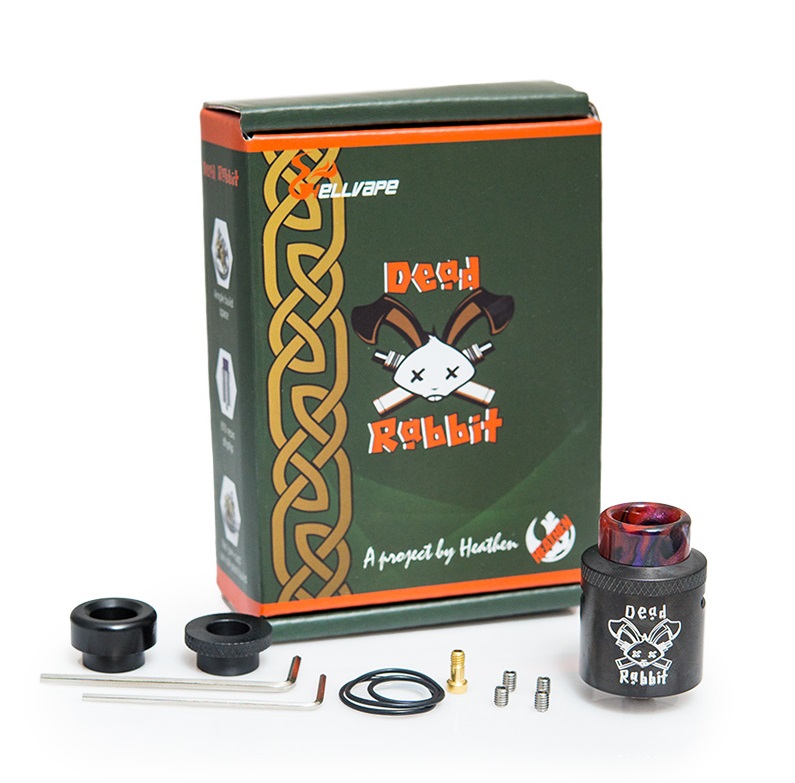 The atomizer comes with a 510 drip tip adapter, as it sports a removable 810 mouthpiece. Instead of the standard 510 variety, the device comes with two 810 drip tips, a resin, and a Delrin. The “rabbit” parts of the RDA are also another stand-out for the atomizer.

The exterior features a CNC engraving of a dead rabbit. The diagonal, gold and silver-plated connections, meanwhile, on the build-deck resemble a dead bunny’s ears, supposedly. There is knurling along the top rim of the top cap that helps vapers adjust the airflow, or to remove the top lid.

The mouthpiece is wide-bore, so vapers do not have to remove the air cap to drip on their coils. They need only squeeze their juice right down into the air hole. This easy filling-style is a signature of the Heathen’s design.

Building on the Dead Rabbit

The wide holes for the installation of leads are what a lot of vapers love about the atomizer. The design makes it easy to drop-in, or slide-in, pre-wrapped coils even without trimming the leads. If the points do need cutting, there is enough space left on the bottom for a vaper to do that.

The build-deck supports both single and dual-coil builds. One set of posts, the positive side, is gold-plated. The gold plating increases conductivity between the mod and the coils. The stainless steel, negative-side, works to distribute power to both coils in a dual-coil configuration evenly.

The option of using both slotted screws, as well as hex screws, makes building on the deck straightforward. Hex screws come with the Rabbit, so vapers can make the switch if they want. Vapers can easily secure their leads using the side slots, with a flathead or the Allen that comes in the package. 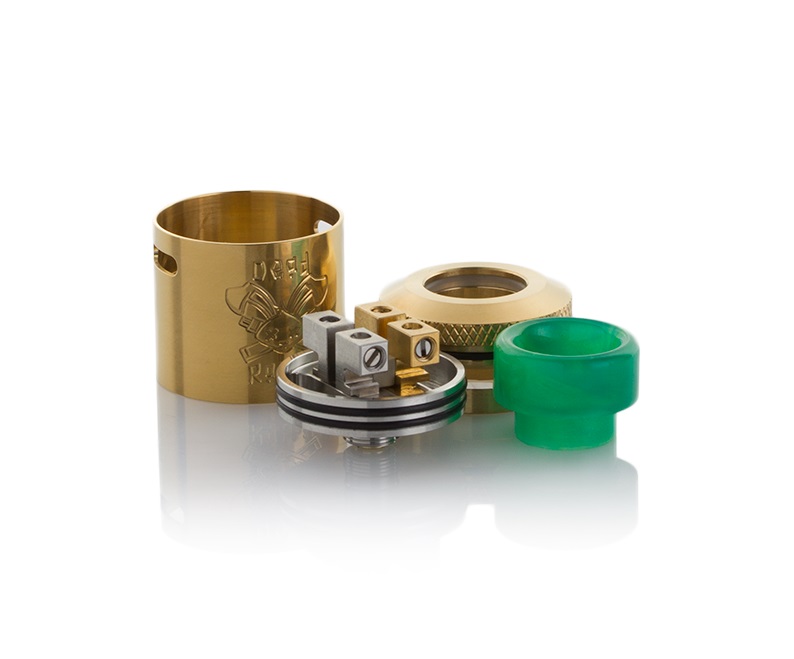 As the build-deck on the Rabbit supports both single and dual coils, vapers have the option of choosing between better flavors or more massive clouds. A single coil takes up less mods’ battery power, as well as consumes less e-juice.

If vapers opt to wrap only a single coil doing so is much easier than doing a double wrap. With that said, the Rabbit performs as well with a single coil as it does with a double.

The leads are easy to install, as promised. The deck takes all the difficulty out of the wrapping and mounting of coils. The cloud size increase when making the switch to a binary build from a single coil. There is more coil, more wicks, more e-juice, more everything.

The Rabbit comes standard with a protruding 510 connector that is compatible with hybrid vape mods. Vapers can remove the pin though and install the squonking pin that comes included. One advantage that this RDA has over dedicated squonking RDAs is the elevated build-deck and the top airflow vents.

With squonking mods that have lower airflow vents, squonking too much e-juice led to spillage. With this airflow system, vapers can squonk more e-juice into the deep juice well and not have to worry about leakage.

The juice well itself is quite ample, around 3 to 4 mm deep (so, between 0.11 and 0.15 inches). The airflow vents are another marvel of the Rabbit. The vents align perfectly with the coils since the cap is adjustable. If that is the case, then air passes directly onto the coils for even greater clouds.

The RDA’s 24mm (0.9 inches) diameter is a pretty standard size, meaning the atomizer has no trouble fitting on most vape mods. Even with a thinner device, the Rabbit sits flush with the top of the mod and does not overhang.

After they released the Rabbit, Hellvape released an update, the Dead Rabbit SQ. The SQ version does keep many of the same great features of the original, but it is a little slimmed down.

The SQ is smaller in size — 22mm (0.86 inches), instead of 24mm — and supports only single-build configurations. It still has an all-stainless steel construction, a gold-plated and stainless steel contact, as well as the innovative top, angled airflow vents.

The new SQ also comes with a 510 mouth-to-lung, Delrin drip tip for better flavor output. The SQ features a locking mechanism for the top cap. Vapers need to unscrew the tube to remove it, instead of pulling it off like with the original.

The BF pin that was included in the original RDA kit now comes installed on the SQ. For drippers, Hellvape does include a standard 510 pin in the SQ kit. The SQ is an easier-to-handle RDA, but it still has the same exceptional performance as the original.

The Drop Dead RDA, also from Hellvape and the Vaping Heathen, has a similar, “drop-down” style for mounting coils. It supports both single-coil and dual-coil builds. The top cap features twenty-eight individual airflow holes on either side, instead of the single airflow vent like on the Dead Rabbit. The Drop Dead is also BF compatible, as there is a gold-plated 510 squonking pin included in the kit. 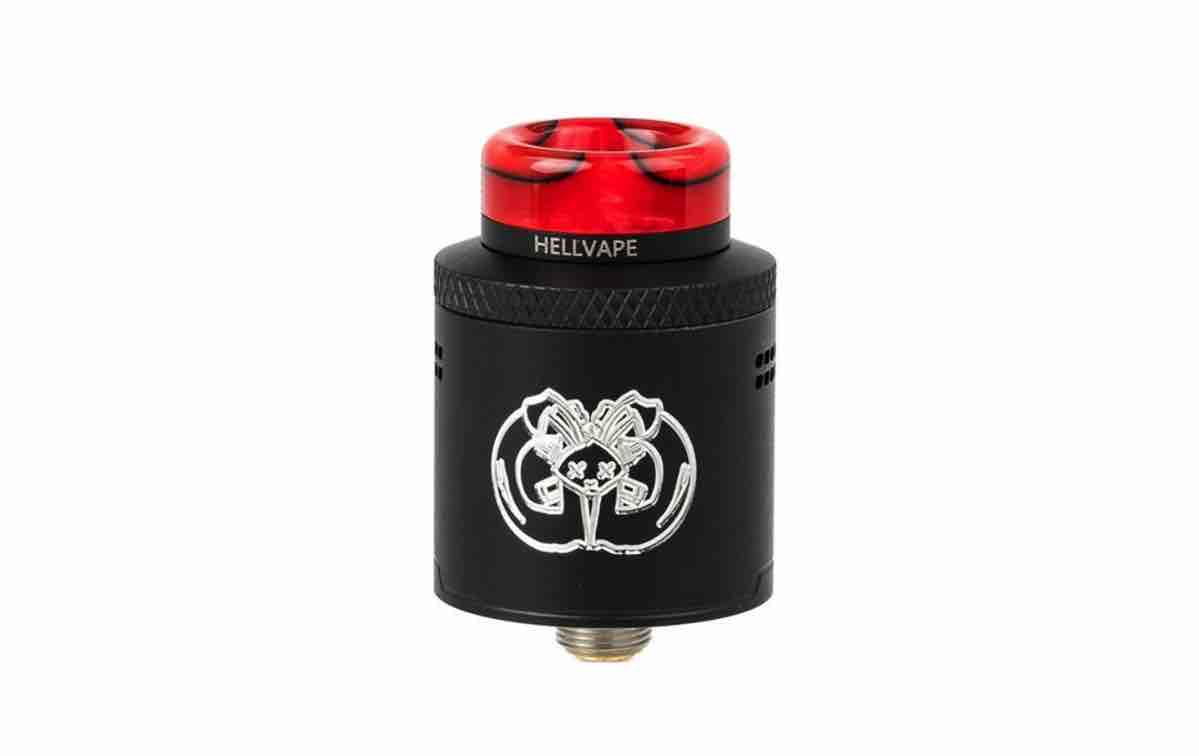 The Wotofo Recurve RDA is another product inspired/designed with a popular YouTube vape reviewer, Mike Vapes. The Recurve uses a unique, single-coil, U-shaped build deck, with a honey-comb style airflow system that feeds directly onto the deck. This RDA comes pre-installed with a 510-squonking pin, but it also comes with a regular 510 connection. 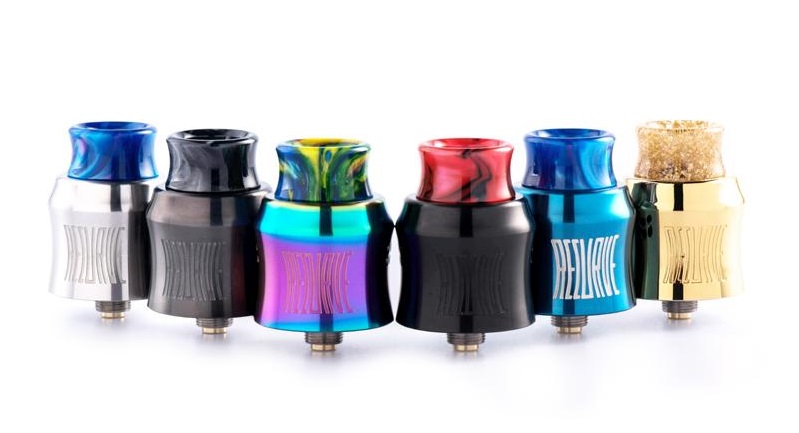 Do you already own/use a Dead Rabbit RDA? Is the RDA all that it is cracked up to be? Does it give off better flavors, or bigger clouds, or both?

The Dead Rabbit RDA is a well-made, well-designed, versatile atomizer for both beginners and more advanced vapers. Its design, performance, and functionality all conform to the wishes of the Vaping Heathen, who wanted to create a straightforward, flavor-blasting RDA.

The airflow configuration, as well as the drop-in style of mounting single and dual-coil builds, is what makes the atomizer stand above the rest. All the parts are well-machined and sturdy. The 810 drip tips were a nice touch for anyone tired of standard 510 mouthpieces.

The versatility of the Dead Rabbit is also a huge plus. It can become a squonking RDA with the BF pin. It also comes with a 510 drip tip vape adapter. The Dead Rabbit is a favorite among many, if not all, serious vapers, and it is easy to know why.