From this cornucopia of vaping, I have selected only one. I have been tasked with reviewing the Executive, which is a bit laughable as a name, but it is a premium wax or concentrates vaporizer that features twin ceramic coils wrapped in titanium wiring that sits on top of a dynamo of a battery at 1200mAh (1200mAh!).

The Executive also features a see-through Pyrex glass chamber that lets you witness first-hand the marvelous clouds brewing inside once the device gets heated up. The device also comes with a metal cap/mouthpiece that, when attached to the battery, turns the Executive into …. what else? A fountain pen! A fountain pen!

Taking a Look Inside

In keeping with its business class pedigree, the Executive comes in a smart-looking black box, that has a magnetic cover that snaps shut when it closes. Not bad, KandyPens. I like it when manufacturers add clever little touches like a magnetic box cover.

Other things you will find in the box:

I’ve said it before, I’ll say it again: I’m not a fan of disguises. I’m all for forthrightness and pride in being a vape pen, not trying to look like an additional device.

If the Executive could write as a pen that would be a marvel of engineering, but alas, it cannot. So I’m forced to deduct points for the uselessness and utter kitschiness of the Executive.

I know I was a little tough on Evol Vape (or EvolVape or EvolApe or I don’t know) for lack of imagination when it came to their design aesthetic, but KandyPens also loses for lack of inspiration.

But, with the design features out of the way, I was still curious to see how the Executive performed. Underneath that garish design, there was still a 1200mAh battery with a dual coil atomizer so that must be where the true value of the Executive could be found.

Wax and concentrate pens are my least favorite mods to fill, but KandyPens killed it with a nice packing and cleaning pick that looks like the preferred tool of a gnarly dentist. The tool has two distinct ends, with a pick on one end and a dabber on the other.

There’s always that draw-test that you do to see if you have any vapor left in a device (just like the smell-test to see if your drawers or socks or any article of clothing, really, is wearable). Only, that test might result in some dry or burnt hits (like being greeted by an unpleasant smell with the smell-test).

The glass tank takes care of all that. You can just take a quick peek to see if there’s anything left to vape. I got to award some points for that Pyrex glass tank, also, for being made of glass and not some other chemically-composed material (I’m looking at you, fiberglass).

I put on enough concentrate to cover my dab tool and slathered it into the chamber – not so hard. The battery has an aluminum alloy finish which was smooth to the touch and gave the Executive that added touch of luxury.

Slipping the cover back on was easy as heck. And with a firing button that even Mr. Magoo could find (it’s big), a quick five-clicks-on and the Executive started the show with the indicator ring lighting up.

The heating time for the Executive was minimal (I’m talking seconds). And the draw was effortless like I didn’t even have to put my lips around the entire mouthpiece, I just put them close to the opening and summoned the vapor.

Although you can’t control the temperature, the Slo Burn technology included in the Executive modulates between different temperatures to avoid burning your wax. The flavor of the vapor was undeniable.

It had that noticeable texture and full-bodied taste that made the vapor so luscious. And it just kept coming. The vapor production was incredible; even looking at it was something to behold and held my attention for at least couple of minutes, just to see that vapor dance.

1200mAh is a lot of power. It could get out of hand, especially if there are no temperature control features installed on the device. But the geniuses at KandyPens knew this, so they decided to use the Slo Burn technology to make sure that the battery did not completely overpower the wax or coils.

This was the other reason the vapor just kept pouring out of the device. I mean, two is better than one, am I right? The dual coils were a needed touch to put the Executive above most other wax pens, and it achieved its purpose.

Not really supposed to be a starter kit, but the Executive isn’t too complicated either. It has an easy to remove atomizer, which is also how the Executive is charged by screwing the charger into the battery and then plugging it into a USB port.

It’s easy to load and easy to clean too: just fire the button, while the atomizer is off and hold it upside down to let the excess wax drip out and then just clean up with a Q-Tip and an alcohol solution.

I think I’ve already wasted enough time and words describing how much I hate disguises. #nomoredisguies.

Taking a look at other comparable devices, the Executive is a sizable step-up from an entry wax pen like the Dr. Dabber series. The former took a little too long to heat up when compared to the seconds that the Executive needs to get going.

The Executive did make me roll my eyes with its title and its corresponding fountain pen disguise. But once I put it to the test, the Executive performed better than expected. Its power is measured and precise; the coils worked perfectly in conjunction with the battery output; the glass chamber made for a great pull, and the chamber was easy to load.

I give the KandyPens Executive a first-class 9/10.

January 2, 2018
Joyetech brings to you the new edition of one of their best entry-level vape pens, the Exceed D19. Check our full review here. 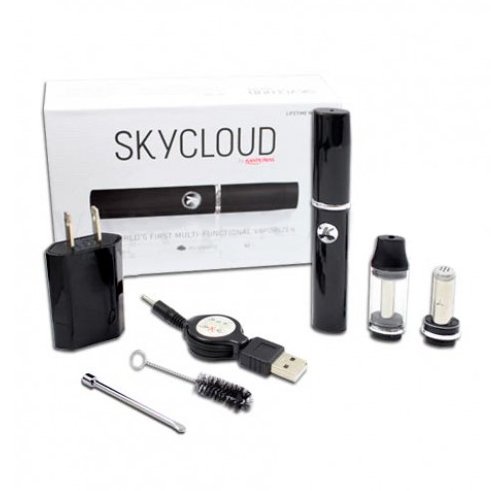 July 30, 2015
Versatile and top notch is how we rate this vaporizer. Read our in depth KandyPens SkyCloud vaporizer review to know how this vape pen performs.