The KandyPens Oura vape is a best portable dab pen rig made with a durable zinc alloy exterior and a 3000mAh internal battery. The Oura vaporizer pen has a wide-base giving it unmatched stability, and it features a no-touch power/temperature button on its front.

The KandyPens Oura consists of the battery base and the attached atomizer which is one piece. The removable white crystal glass bubbled piece sits atop the battery. The Oura dab rig has four pre-set temperatures, controlled via the Smart-Touch power button. There is a USB-C port for charging the built-in battery at the back of vaporizers.

A First Look at the KandyPens Oura

The KandyPens Oura black vaporizer stands apart, literally, from previous KandyPens vapes. The California-based vape pen and e-cig maker leans toward lean and straight, not to mention, portable and discreet with most of their other pen vaporizers. It’s interesting to see them break out of their usual aesthetic design to create this one-of-a-kind vape.

The Oura black vaporizer is meant for dabs and waxes. It comes with two removable atomizers, one made of quartz crystal glass (pre-installed) and the other a ceramic cup. The temperature range is also significantly higher than other dab and even dry herb vaporizers. There are four different heat settings, selected via the Smart-Touch power/activation button on the unit’s front. 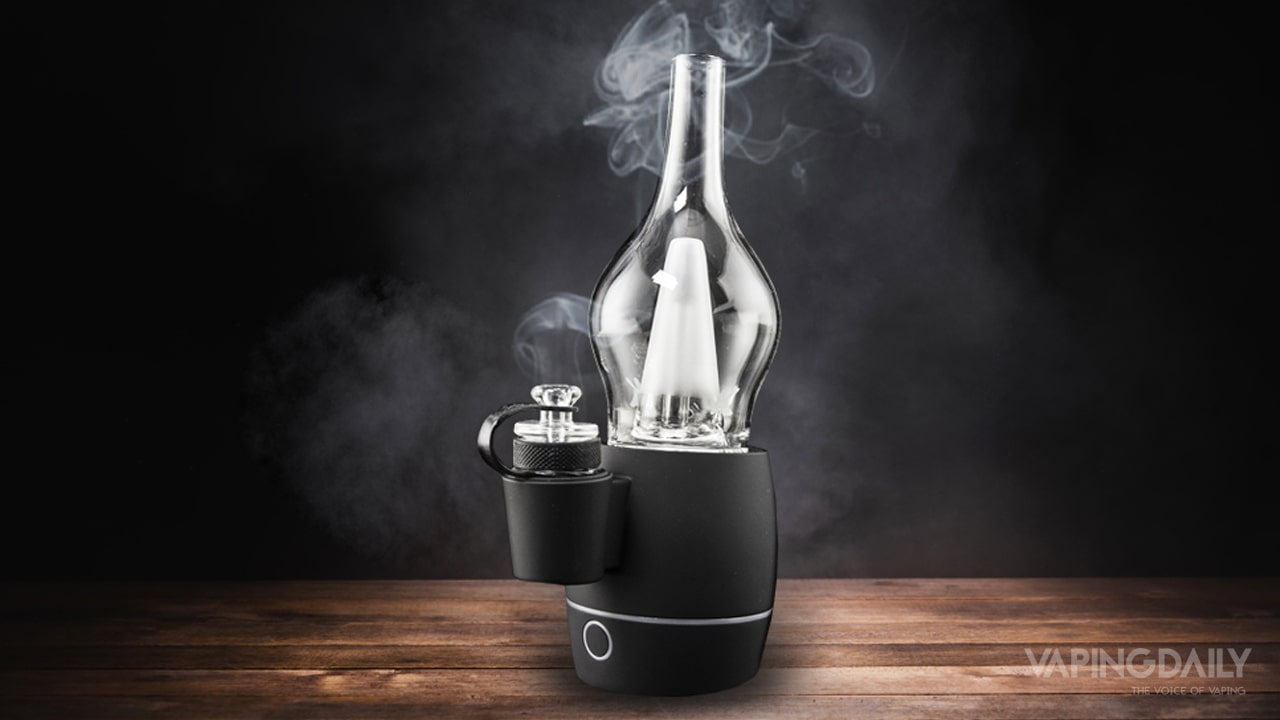 The Smart-Touch button is accented by an LED ring around the entire vaporizer. The LED collar and Smart-Touch button, are the only design flourishes on the Oura (aside from the color, of which there are six). The minimalist and pared-down design are rare for a company as flashy and in-your-face as KandyPens vaporizers.

The 3000mAh battery is built-in, and users charge it via the USB-C port on the back of pens, which is almost unnoticeable unless you are looking for it. Everything about the Oura black vaporizer is straightforward, almost welcoming.

What You Get in the Box

The Oura is KandyPens’ latest black portable vaporizer. As such, it comes fully-accessorized to add a touch of versatility (like a second atomizer), as well as to keep it in good working condition (iso-dipped cotton swabs, loading tool). The entire vape pen stands at around 7″ tall, so expect it to be a big box.

Here’s what comes in the Oura box:

Vaping dabs (concentrated THC), in the pre-vaporizer era, was not an easy thing to do. It required a torch and a specially-made bong or a “nail” vape pen to first heat, and then inhale the dab rig. Couple that with the relative scarcity of concentrated THC, and it was only the most dedicated, knowledgeable people who “dabbed.”

Now, everyone does it. Portable extract vaporizers like the KandyPens Oura make dabbing possible through their battery-powered atomizers, made of either white ceramic or quartz crystal glass. The great thing about this atomizer is that it is versatile so that a user can replace one with the other very quickly.

The vapor then passes through the water-pipe and cools down, before being inhaled. The other great thing about the KandyPens Oura’s configuration is that the vapor path is clear. Looking at the vape pen, one would think that the vapor passed through the base. However, it goes into an air intake valve that goes straight into the water pipe, so it does not pass through any circuitry or electronics.

The atomizers are like cups that sit atop a nichrome heating element underneath. When the KandyPens Oura vaporizer is in operation, the element heats up to the pre-set temperature and produces vapor. The concentrated THC does not come in contact with the component but gets super-heated to the boiling point.

Temperature Settings for the KandyPens Oura

The Oura from KandyPens is that rare vaporizer with a single operating button, which is not even a button – it’s a touch sensor. While this feature is not unusual, it is odd to find it on such a high-powered, high-performance vape pen as the Oura. Pax 3 also has a touch-controls, but it is more compact than this unit, and it performs the same function – switching between the temperature settings.

The four temperature settings on the KandyPens Oura are:

Turning on the vape pen takes five taps of the sensor, after which the KandyPens Oura will vibrate to signal it is activated. Two taps of the button activate “Sesh Mode”, which heats the atomizer for the length of one minute. When the Oura is in Sesh Mode, users can change the temperature setting, even when the unit is in use, by tapping the sensor three times. Users can also check the battery life via the sensor by holding the touch button for five seconds.

With the Fast Charging feature and the USB-C, getting the KandyPens Oura to full power took about an hour. Right above the USB-C charging port is the iconic “K” logo that is the only way anyone would know that this is a KandyPens black vaporizer.

Getting It Ready and Vaping the KandyPens Oura

Everything about the KandyPens Oura vaporizer is meant to make it user-friendly. The black vaporizer has a distraction-free user interface (no LED screens, no adjustment buttons, no excessive branding) so it is very straightforward to get to vaping.

When getting the KandyPens ready to vape, users also need to fill the water attachment and press it gently into place. When installing the water pipe, make sure that the intake holes on the bottom lines up with the vent from the atomizer. If not lined up, no vapor will enter the water pipe. Make sure also to fill up the pipe so that the two air holes in the center are covered, while not also getting water into the air intake valve.

After charging and filling the water pipe, users can turn on the vaporizer and select their preferred temperature setting by tapping the button twice, which will start the heating process.

Heat-up time depends on the level selected. The lower settings (yellow and green) take about five seconds, while the higher one (red and blue) take longer, around twenty seconds. When the atomizer is ready (it will vibrate), vapers can add a pebble-sized piece of concentrate, and let it dissolve, while covering the lid with the provided carb cap.

Users could also use the atomizer as a nail and add concentrate while the vaporizer is heating up. This way, they can start vaping right away, as the water attachment fills up with vapor. The 60-second duration of the Sesh Mode is more than enough to get several hits from a little piece of wax.

Users can turn off the KandyPens Oura or leave it idle, as the four-minute shutoff time will turn off the vaporizer, which ensures a good battery life. As for the battery life, from a full charge, a vaper could get at least thirty, 60-second sessions, before the battery runs out.

The Puffco Peak is a lightweight, hand-held vaporizer for dabs and waxes. It’s exterior design and user interface are very similar to the KandyPens Oura. 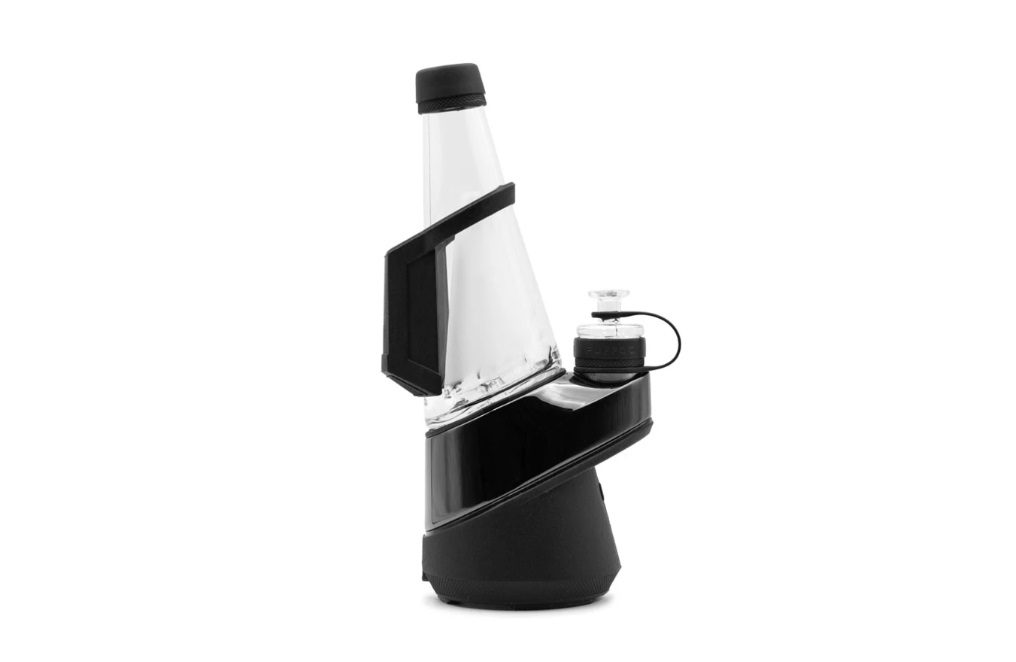 The Peak pen also features a one-button operation, a battery base with an attached atomizer, and a quartz glass water piece. The Peak also has four pre-set temperature settings, although the range is lower than the Oura, with the Peak starting at 450F and ending at 600F. The Peak uses a white ceramic bowl as its atomizer with a spare one in the kit.

The Switch has a quartz glass water pipe attachment and an LED top section with over 25 different colour options. The Switch goes from oils to dry herb with a button on the front that users can select.

KandyPens like the other companies mentioned in this review – Puffco and Dr. Dabber – do not have many dry herb vape pens in their line-up, so it would be nice if they could use the same innovation and motivation that created the Oura to create a dry herb vaporizer as fantastic as the Kandypens Oura.

Notwithstanding, the clean, streamlined look and operation of the KandyPens Oura are what makes it a vape winner – oh, and this best vape pen produces excellent vapor as well. The atomizers are easy to change out and clean.

The fact that the temperature can change with a simple touch or two also puts the KandyPens Oura vape heads and shoulders above the other portable e-rigs out right now. There are no complicated controls to remember, or adjustment buttons to fiddle with, the KandyPens Oura is the best straight, high-quality dab and best concentrates vaping.

Which method of vaping cannabis (leaf material or extracts) do you prefer? Which style has the better-performing, better-looking devices, according to you? Do you think concentrates will eventually take over from herbs or will dry herb vaping always be more popular? Let us know what you think in the comments’ section below. 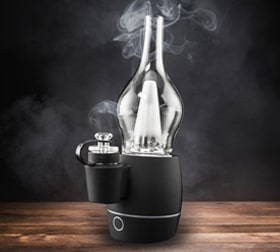