It is always great to see how a vape company interprets or applies their company’s ethos and spirit into a particular vaping system. There are box mods, and then there are box mods from Vaporesso, or Wismec, SMOK, all of them some of the best box mods in 2022 and influenced by their creator’s philosophy. And this is why I’m so excited about the Feather, from KandyPens. The Feather is KandyPens’s take on the open system pod mod that differs from the Rubi, also from KandyPens, which was a closed system.

The Feather is explicitly designed to work with nicotine salts that deliver higher doses of nicotine in a smoother way than most other e-juices. Unlike the Rubi, the Feather has a small 2 ml tank underneath its mouthpiece. The mouthpiece gets affixed to the also tiny 380 mAh battery that can output 15W and the entire apparatus measures in at only 8mm in width and 88mm tall. 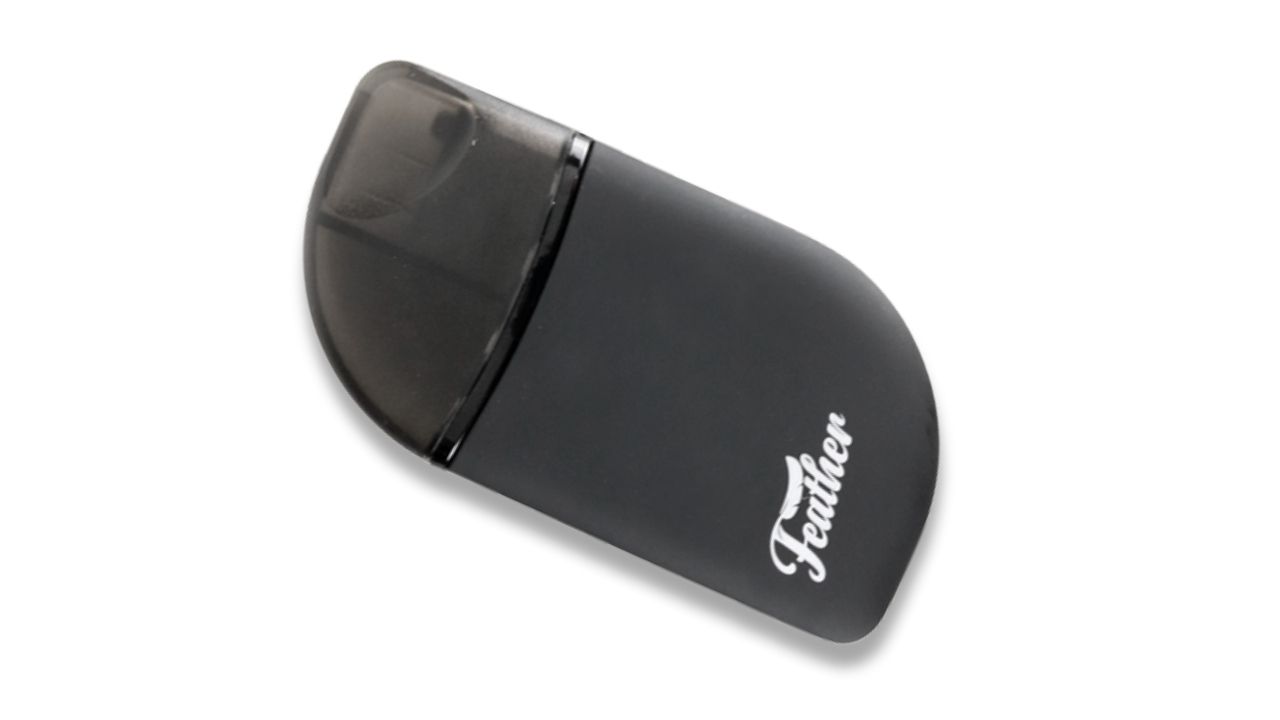 And just from those measurements, we can tell that the Feather competes with devices like the Smart 4R and the Envii FITT for their stealthiness and portability. Those other two devices were also open system and were easy-to-use, compact mods that performed supremely well, although there were a few problems with the FITT and their pre-filled cartridges.

Some other great features of the KandyPens Feather:

Inside your KandyPens Feather box you will find the following:

It’s hard not to be a fan of pod mods. They are simple, easy-to-use and are a stylish, beautiful-looking and practical way to vape. They practically disappear into your hands or pocket, and now, thanks to open system pods, you can fill them with whatever e-juice or nicotine salts you want.

The Feather is all of those things, and much more. It’s super-thin, but it doesn’t feel flimsy or easily breakable. The rubber coating around the battery protects you from heat transfer and it from any unfortunate falls that might befall it.

There are no buttons on the Feather, just a few indicator lights along the thin side that indicate your battery life. The Feather contains two parts – the battery and the tank. The tank is made from a semi-transparent plastic that only gives a hint of what’s inside, but it’s enough to let you take a glimpse at your e-juice levels. 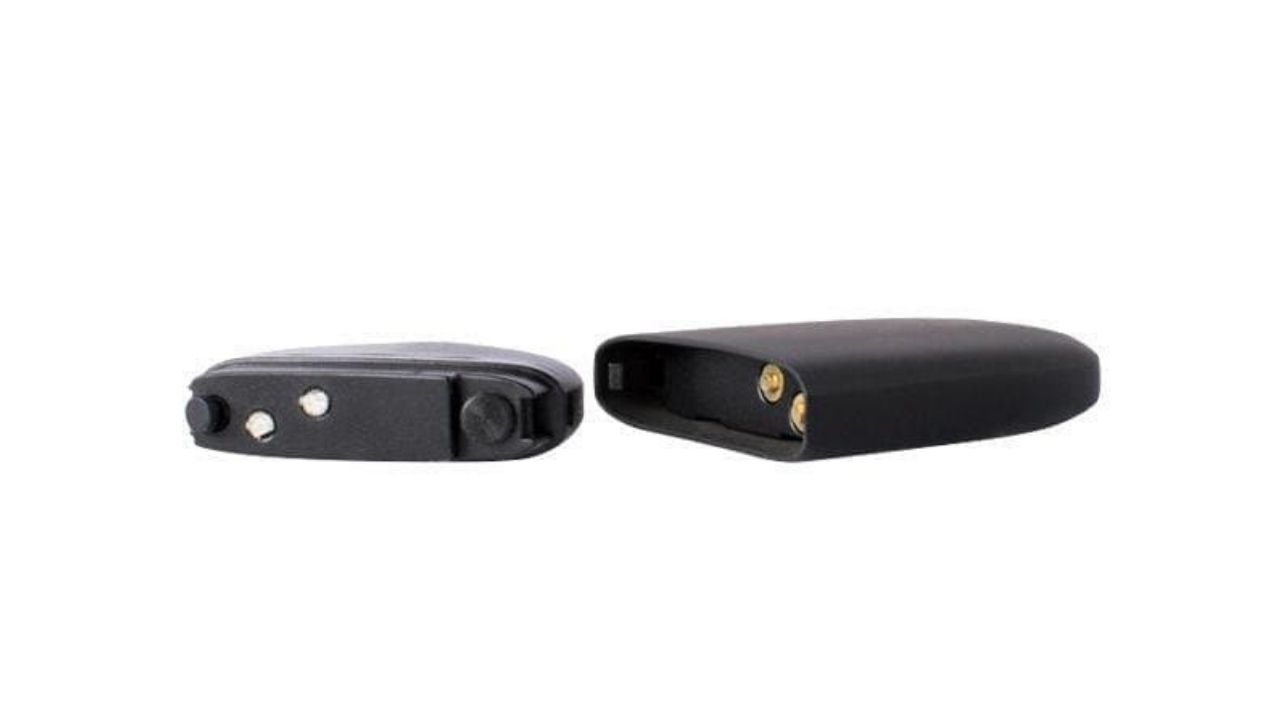 The mouthpiece is a tiny opening on the corner of the upper part of the tank section. Despite its small size, it was more than enough to enable smooth mouth-to-lung hits, as well as direct lung hits.

The battery section is covered with a rubber coating that felt great to the touch; it was the perfect material to use with this kind of device. The battery section was also tastefully designed with a subtle, white KandyPens logo and Feather logo on each side.

The USB charging port is ideally placed right underneath the LED indicator lights. And the entire device is incredibly well-thought out. The Feather lends itself to easy functionality, and nothing feels awkward or out-of-place; everything is where it should be, and there’s nothing there that doesn’t need to be.

All pod mods are designed to be simple, straightforward devices; some don’t even have buttons. The Feather is one of the latter, with the device being draw activated. The battery is built-in and is charged through the device (although I do not believe the Feather to be a pass-through device).

For me, charging the device to full power (with all of the LED lights lighting up) took a little over an hour. The tank was something I found a little “interesting” to fill. I won’t go all the way and say it was difficult.

But, after reviewing so many box mods, you get used to certain things, like huge fill ports, and easily removable top caps, not the tiny rubber stopper you need to first, find and then remove with your fingernails and then use to fill your tank.

But that’s how it is with the Feather. I was annoyed at first with the small fill hole and the difficult-to-remove stopper, but the more I thought about it, the more I realized that they were successes given the Feather’s small size.

Making a device this tiny, you have to find ways to do things on a smaller scale, and the fill hole and rubber stopper might not have been what you see every day, but they performed their duties and kept the tank from leaking. After you’ve filled your tank, you reattach the mouthpiece/tank to the battery section, and you’re ready to vape.

However, even before you reattach the tank, you should let the coil soak in your e-juice, and also give it a little shake to prime the coils. Allowing the coil inside the tank get soaked for at least twenty minutes will make sure that it is adequately saturated so that it can heat up faster and work well.

Priming your coil is something that you should do with all open system pod mods at least once, ideally, before your first use. With the coil primed, I put the tank and battery together and started drawing.

The response was instantaneous, and I felt the beginnings of a flavor profile from the Dominant Vapor Cheese in the Cake Hole e-juice I was using. I took more and more draws, and the flavor kept getting better and better until I reached a decent level.

I didn’t have any Element nicotine salts on hand, but the Feather can be used with both. The clouds were bigger than I expected also. But, mostly, the flavor was sweet and luscious and filled my mouth. The 380 mAh battery, fully charged, lasted me for at least eight to nine hours. And refill times were about as I expected, about three or four times within those eight to nine hours.

The last open system pod-like device I reviewed, I compared to the previous pod mod that I reviewed, so it only makes sense to continue that system. After all, there are just but a handful of similar devices out there.

So for this latest contest, I decided to pit the KandyPens Feather with the Envii FITT, which was the last open system pod mod I reviewed and has many similar characteristics to the Feather. One main selling point of the FITT was that it could be used in a button mode or a puff mode, which was something I appreciated but of which I wasn’t a huge fan.

The version of the FITT I reviewed came with pre-filled pods that had leaking problems once they were installed into the pod port, so that was a minus. The Feather, unlike the FITT, does not have a protruding mouthpiece which made the device all the more streamlined and ergonomic.

So, despite the lower battery and e-juice capacity, the specs that it had made the Feather a great vaping device. It’s beautiful, because of all the smooth edges, and it’s compact, light, and somewhat powerful. And it didn’t leak. The decision goes to the KandyPens Feather.

KandyPens is known for making their devices if not beautiful, then enjoyable to look at, and the Feather is no exception. The decision to keep the Feather all rounded, without any awkward mouthpieces or any other attachments was a good one.

For its small size and pocket-friendliness, the Feather was still able to produce great flavor and sufficient cloud to warrant a top rating in both departments.

The Feather is only 8mm wide! And it works beautifully. I know that a small size is inherent to any pod mod system, but the way the designers shrunk the Feather into its shape was remarkable.

The pod mod system just keeps getting better and better. This new compact system that is quickly replacing the old, e-cigarette style, has a ton of benefits to it, especially the smaller size, and the all-in-one system that contains everything you need in one discreet package.

A pod mod system made by KandyPens was sure to be a hit. The Feather does not disappoint. It’s a statement on your personal taste also since it’s better at being hidden than standing out, which is something rare for KandyPens, who specialize in the bright and outlandish. But still, the Feather works great and looks even better.

One comment on “KandyPens Feather Review: The First Pod Mod from KandyPens”