One thing I always remember asking myself about box mods is, “why aren’t there box mods for waxes and concentrates and dry herbs?” I guess it comes down to the material since waxes and dry herbs don’t need as much heat to vaporize like liquids.

But still, not all box mods need to be high-wattage devices, and can still vape at temperatures and wattages suitable for other media. The KandyPens has filled this need in the marketplace with their K-Box.

It functions a lot like an e-rig or e-nail, but the K-Box provides its own power supply through a short and stout mod that has four different variable wattage settings.

The “tank” that sits on top of the mod is actually a ceramic chamber with three quartz coils inside to heat up your waxes and concentrates. There is a glass tube that gets placed over the chamber that acts as your mouthpiece and vapor path. 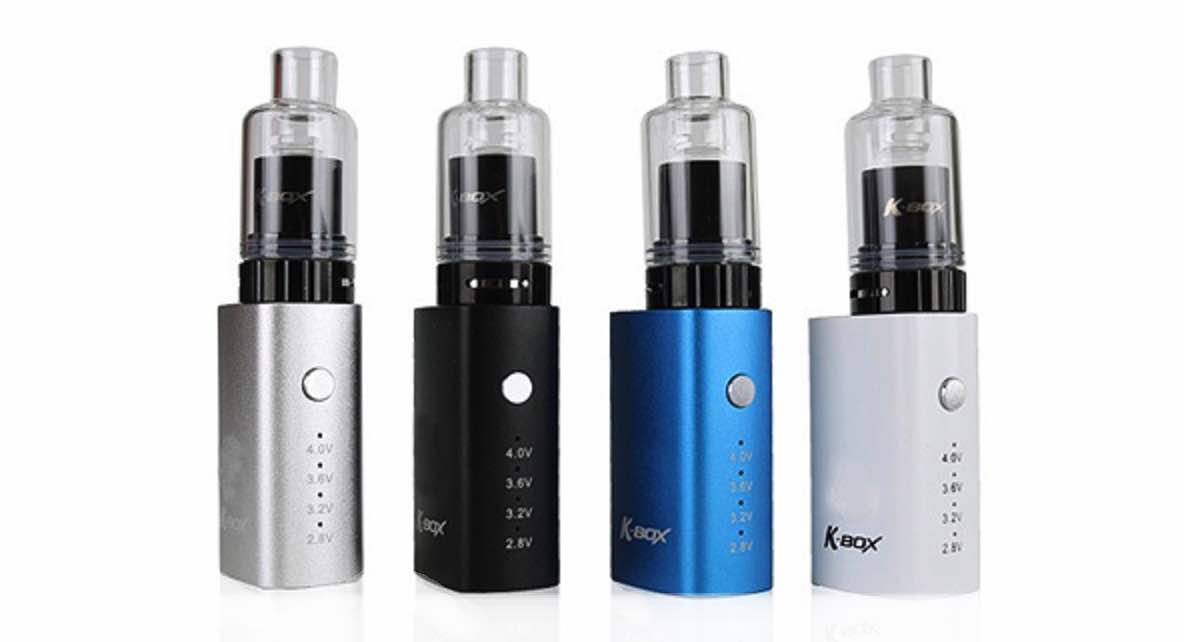 The K-Box mod has 510 threads so it can be used with other wax and concentrate chamber or even pre-filled cartridges. There aren’t so many other adjustable features on the K-Box, other than the airflow ring at the bottom of the coil and the four variable wattage settings.

What’s In the Kit

Here’s what you’ll receive with your KandyPens K-Box package: 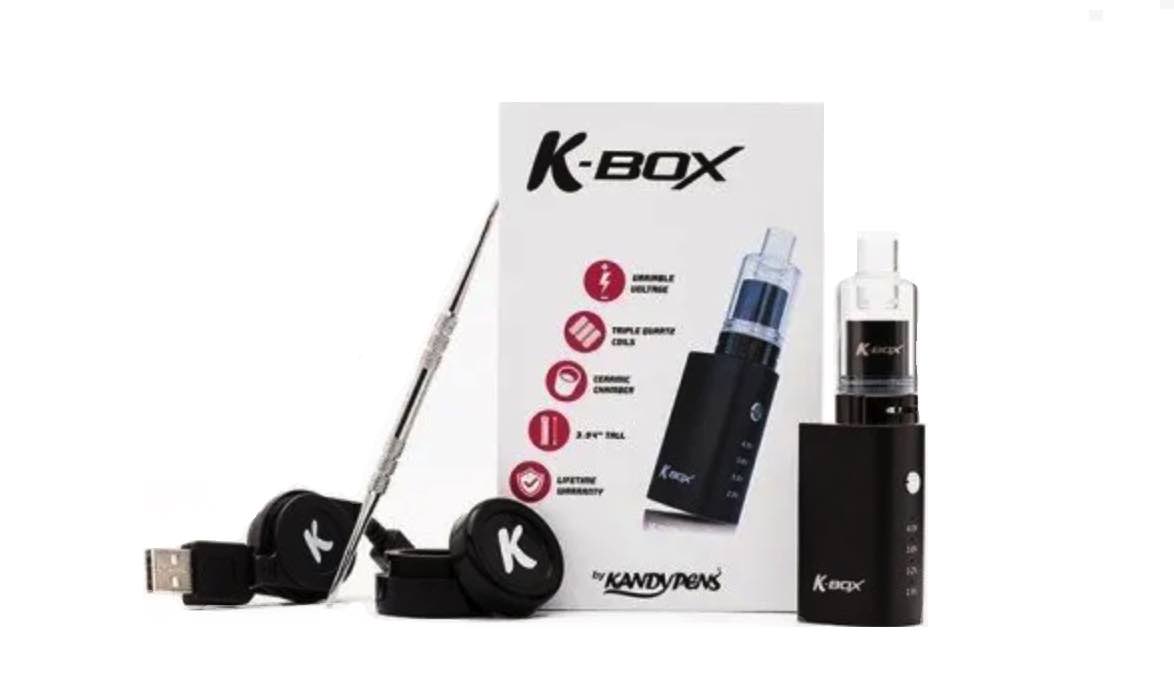 A First Look at the K-Box

One thing that automatically came to mind about the KandyPens K-Box is how well it would work with the Mig Vapor La Queef e-nail that also works beautifully with dry herbs and waxes. The mod itself is incredibly small and measures out at only 100mm (or around 4 inches).

There is a USB charging port on the bottom of the device, and the top of the mod features a 510 threaded connector so the atomizer that comes with the K-Box can be swapped out for another similarly threaded tank. 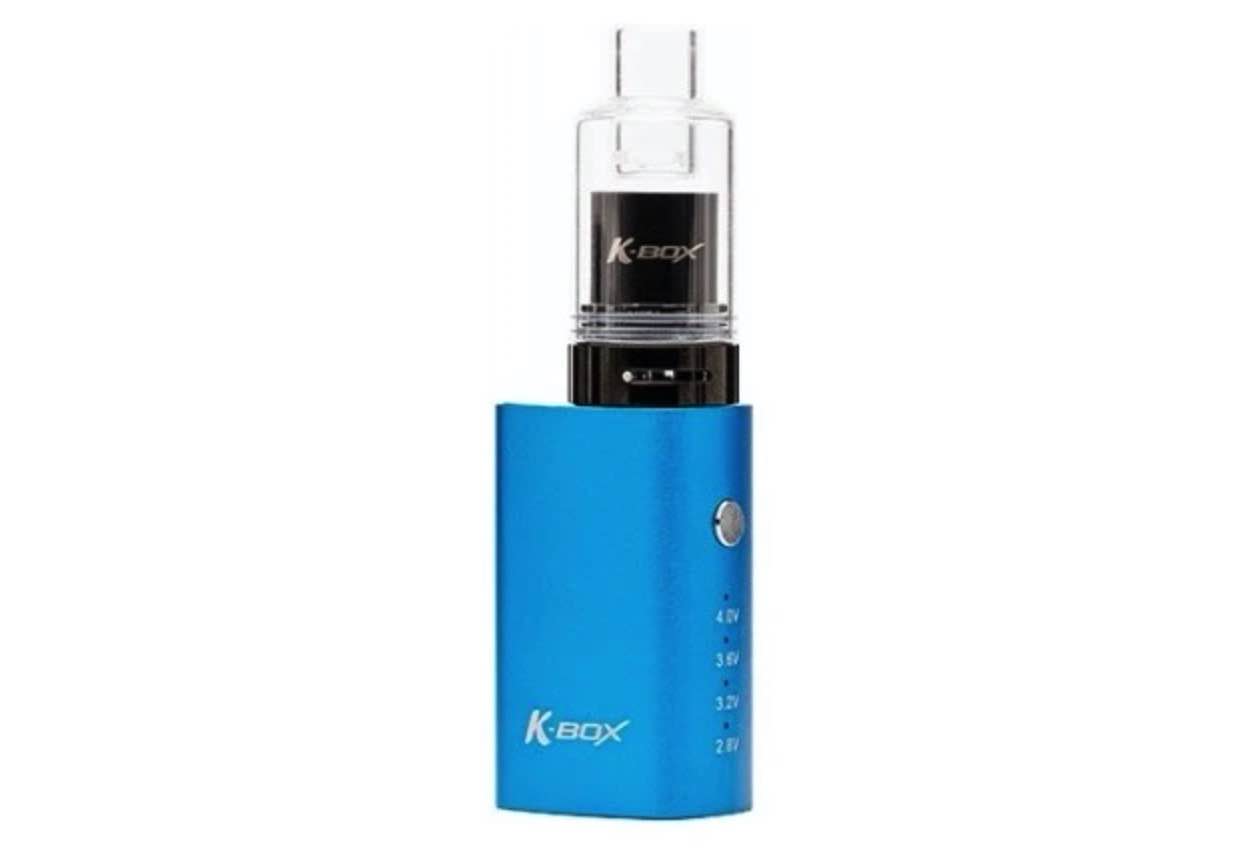 The glass mouthpiece that covers the tank fits perfectly and looks like it was constructed for precisely that reason. The mouthpiece works together with the already installed atomizer, which also features two bottom airflow slots.

So the K-Box is obviously taking a lot of cues from box mods setups, with adjustable airflow, a top-filling chamber, and a power/firing button. But it still seems much easier to use and operate than most advanced box mods.

The mod has a built-in 900mAh battery, and it’s voltage levels go from 2.8V to 4V. Voltage levels are akin to temperature, so the higher you go in voltage means your vape is getting hotter and hotter.

The K-Box has all the trappings of a box mod but is ten times easier to use. The K-Box comes more or less assembled, except for adding the glass mouthpiece, and, of course, loading your chamber.

There are some tools to help with this included in the K-Box package, like a dab tool and a silicone wax container. You just need to use your dab tool to pick up a small, sesame seed-sized piece of wax or concentrate and scrape it into your chamber, right on top of the coils.

You might want to do a quick burn-off of the coils also, just to get rid of any impurities that might have gotten in there when it was being manufactured. But once you’ve loaded the chamber, you just replace the mouthpiece and click the firing button fives times to turn on the device. 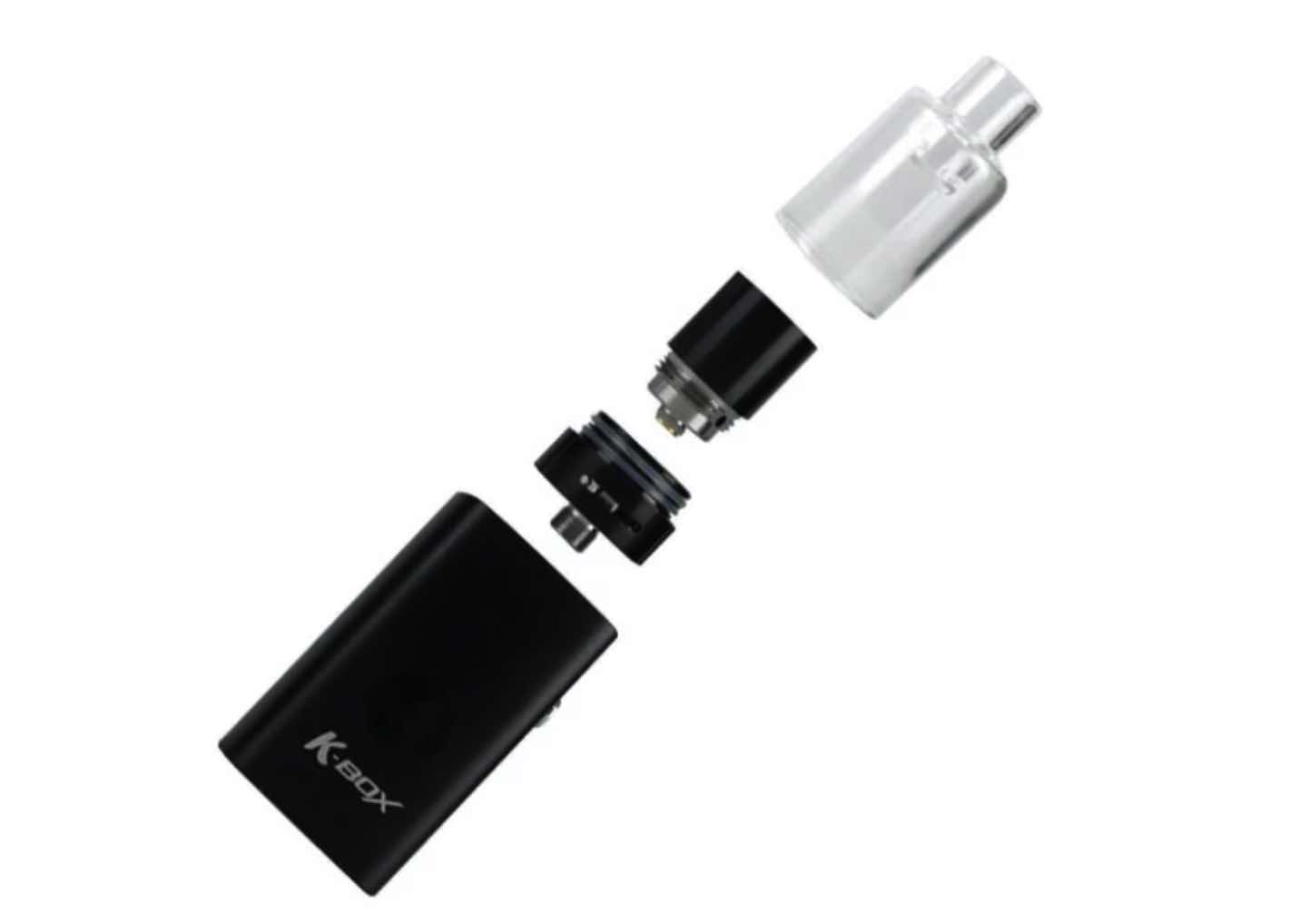 At the very top of the voltage levels, the vapor quality was intense, and a little too harsh. I went down through each voltage setting and found that the middle ground at either 3.2 or 3.6V was best for both flavor and vapor quality.

The Competitors to Consider

When looking for a device to make a comparison with the KandyPens K-Box, I remembered one wax vaporizer that was built in a box mod style was the 2-in-1 Pulsar APX. The APX vaped both waxes and dry herbs.

With a 1500mAh battery inside the Pulsar, it handled both dry herbs and waxes well. It also had that box mod shape, but its chamber was located inside the mod, and there was an interrupted vapor path, which the K-Box does not have. 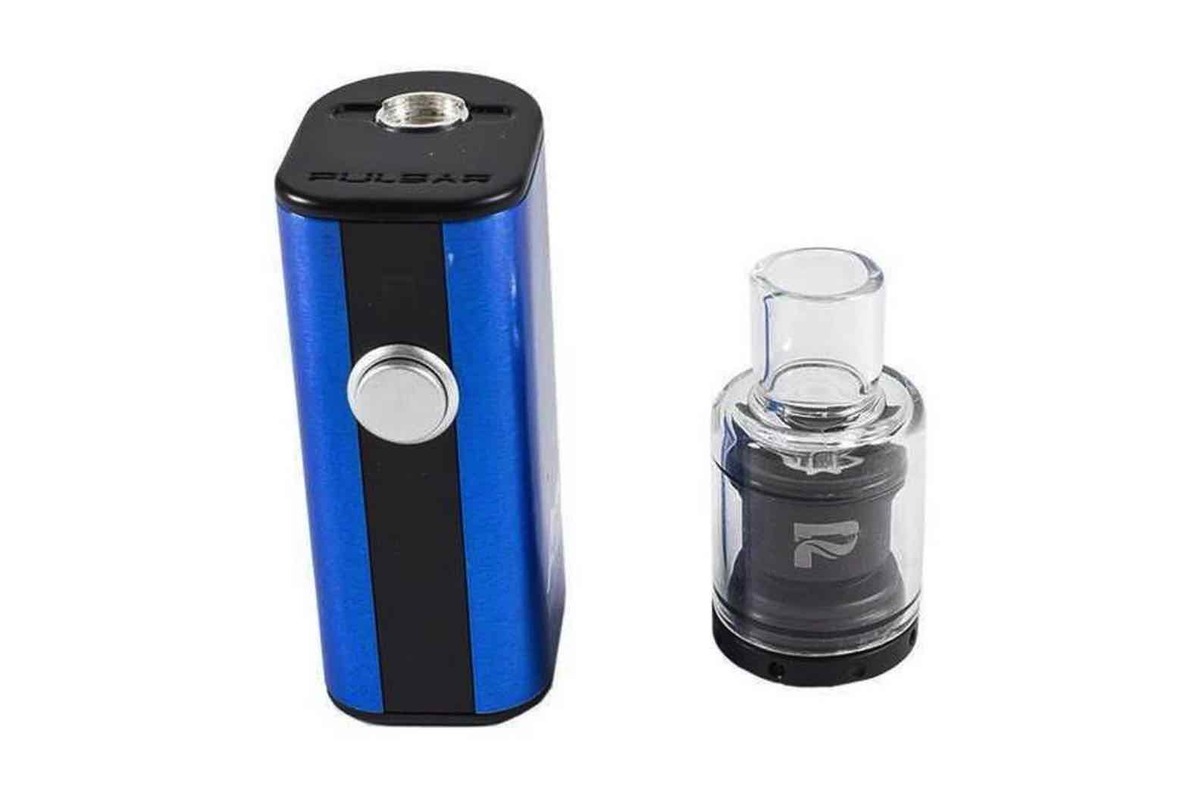 The Pulsar, like most traditional dry herbs vapes, required at least a minute to get heated up and start producing vapor. There was no such wait-time with the K-Box; my material started vaping almost right away.

The K-Box is also just better built. It has a built-in battery and that 510 connector pin that makes it compatible with a lot of other cartridges, tanks, and atomizers. And, maybe the best thing about the K-Box, is that it is a KandyPens product. ‘Nuff said.

KandyPens could have played it safe, and only put in a ceramic donut-shaped coil, or a double-coil, or even a single-coil. But, no. They went for the box mod power output and placed three quartz coils in the atomizer for maximum vapor output.

A lot of e-juice box mods have mastered the art of being tiny, and KandyPens followed that lead by making the K-Box extremely petite.

The vapor output on the K-Box was intense. The three coils, with adjustable voltage settings, allowed for vapor production to be controlled by you, but, whatever level you chose you could be assured that there would be significant cloud making.

KandyPens disappointed me a little by producing a plain, black box mod with pinpoint LED indicator lights that had none of the flash or pizzaz of other KandyPens devices.

The KandyPens K-Box is the answer to a question I’ve been asking myself for awhile now, and that question is when can I vape waxes and concentrates in a box mod form? The K-Box doesn’t sparkle like a lot of other KandyPens devices, but it performs beautifully.

The triple quartz coil atomizer was ideal to flash-fry any wax or concentrate that you put into the chamber. The option of adjustable voltage was an inspired idea and helped customize your vapor in a significant way.

The glass mouthpiece was sizable enough to house and capture vapor to provide for excellent mouth-to-lung and direct-to-lung hits. I didn’t think, however, that something with such a large glass attachment would be ideal to be carried around. But, since the K-Box has a 510 connection, you could use whatever atomizer you wanted.