The Utillian 420 comes down the pipeline right after its big brother the Utilian 651, which was also a compact, powerful dry herb vaporizer from Utillian. While the 651 was more an upmarket model, the 420’s price point is much more affordable.

You shouldn’t expect the 420 to be as decisively powerful or impressive as its older brother or other upscale dry herb vaporizers like the Pax or the Firefly. Coming in at just under a $100, the Utillian 420 is still a well-built, well-designed mod that features a lot of the same high-quality materials as its competition.

What’s Else Comes in the Box

The packaging of the 420 is very, well, utilitarian, so it doesn’t do much aesthetics-wise other than providing a safe place to store your mod.

Inside you will find: 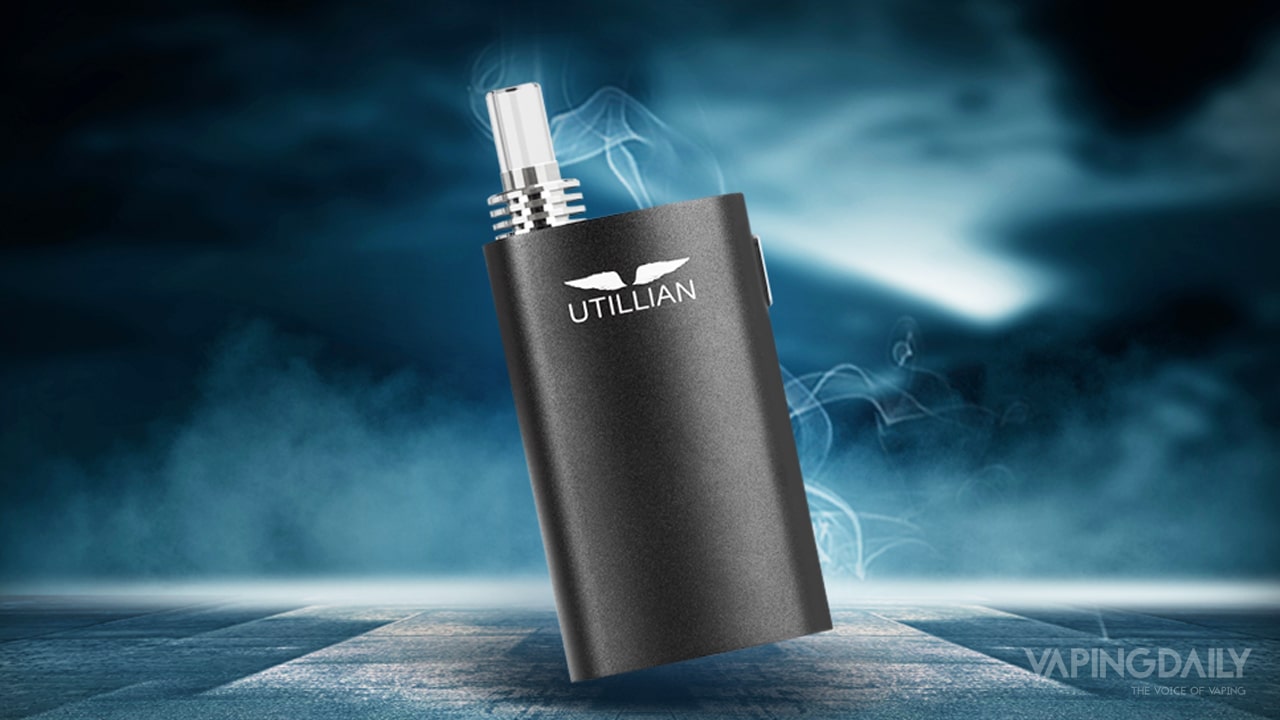 You will hear a lot about the Utillian 651 in this review since it is, of course, the more upscale version of the 420. So, when I saw the 420, I immediately thought about the 651, although, the 420 made enough of an impression to make me take it seriously.

The 420 holds its own in terms of its style. While flask-shaped, the 420 does have a different design mode than its older sibling. It has an all-black, sturdy aluminum outer shell, and the mouthpiece consists of a glass tube fitted within the chamber underneath.

There were these three outer ringlets that surrounded the glass mouthpiece that I didn’t really like, but the silicon mouth protector covered them up and actually made the device look more appealing.

The firing button is on the side of the mod, right where your index finger would go to make for easier firing and temperature modulation. There is an OLED display on the top lid of the 420 that reads out the four temperature settings.

You can’t change the temperature in individual increments, but the four settings were sufficient enough in range to make for a customizable vaping experience. The 420, like its predecessor, fit perfectly into my hand, and the trigger button located so close to your finger made it even that much easier to use.

With the 651, it was the entire top lip that slid off to reveal the chamber, but with the 420 you just have to remove the glass mouthpiece to access the chamber. The heating chamber is a ceramic conduction oven, so I was careful to pack in my herb moderately tightly so that the material could heat evenly without any extra air pockets.

You replace the mouthpiece and turn on the device by clicking the firing trigger five times. The LED display then lights up, showing you your charge level and the temperature setting from the previous session.

The device will then start to heat up to the last used temperature. To cycle through the temperature settings, you just press and hold the firing button for three to five seconds, and then choose which of the four you wish to vape with.

There’s also a nifty little-hidden compartment under the 420 that’s made especially to store your mouthpiece when you’re not using the device.

The unit took about twenty seconds to get to the temperature I set it at, which was the second-to-last setting, 200C, (the LED display temperature only in Celsius). I felt the mod getting warmer, but it wasn’t to my discomfort.

I went in for a hit, and I found the draw was effortless and I kept a steady stream going from the mouthpiece. I felt the tingle of my herbs right away and didn’t notice the presence of any other flavor profiles.

Cloud-wise, I don’t use dry herb vaporizers to make great clouds, but choosing the highest temperature setting on the 420 allowed for reasonable cloud production that didn’t minimize the flavor. I vaped well into the next day on my fully charged battery. After I had exhausted it, the battery took about an hour and a half before it was fully roused again.

How the Utillian 420 Stacks Up

I recently reviewed the Pulsar APX dry herb vaporizer that was also an easy to use and easy to hide mod with the same type of specs that the Utillian 420 has on it. The Pulsar APX also had a slide-off lid that let you access the loading chamber.

So comparing these two models, I would say there’s not much difference between the two. They both feature various temperature setting, one-button operation and strong, well-performing batteries. But basing my call on performance, build and design, I have to give it to the Utillian 420 for its well-made, high-quality components.

The Utillian 420 is the basic dry herb model from the Utillian brand. It’s a modest-looking device, without out the cavalier flashiness of the 651 model, with its curved body and easy to grip outer shell.

The 420 can cycle through four different temperature settings, which are displayed in the well-placed LED display next to the mouthpiece. Using the device and changing the temperature settings is easy thanks in part to the one-button operation of the 420.