Despite iJoy pushing the power limits with their devices, especially the Captain X3, which was the first box mod to feature three removable 20700 batteries in one device, the iJoy Genie PD270 is a pared down mod.

The Genie features only two removable 20700 batteries and a maximum power output of 234W. The Genie kit comes with the same Captain sub-ohm tank that came with the X3 and also has some exterior accents with the back panels being removable and interchangeable.

The Genie does share a resemblance to the Captain, much like the Captain resembled the Wismec RX G3, with its hexagonal shape for comfortable gripping. I reviewed the iJoy Captain a few reviews ago, and it was an impressive device that pumped out a significant amount of great-tasting cloud. 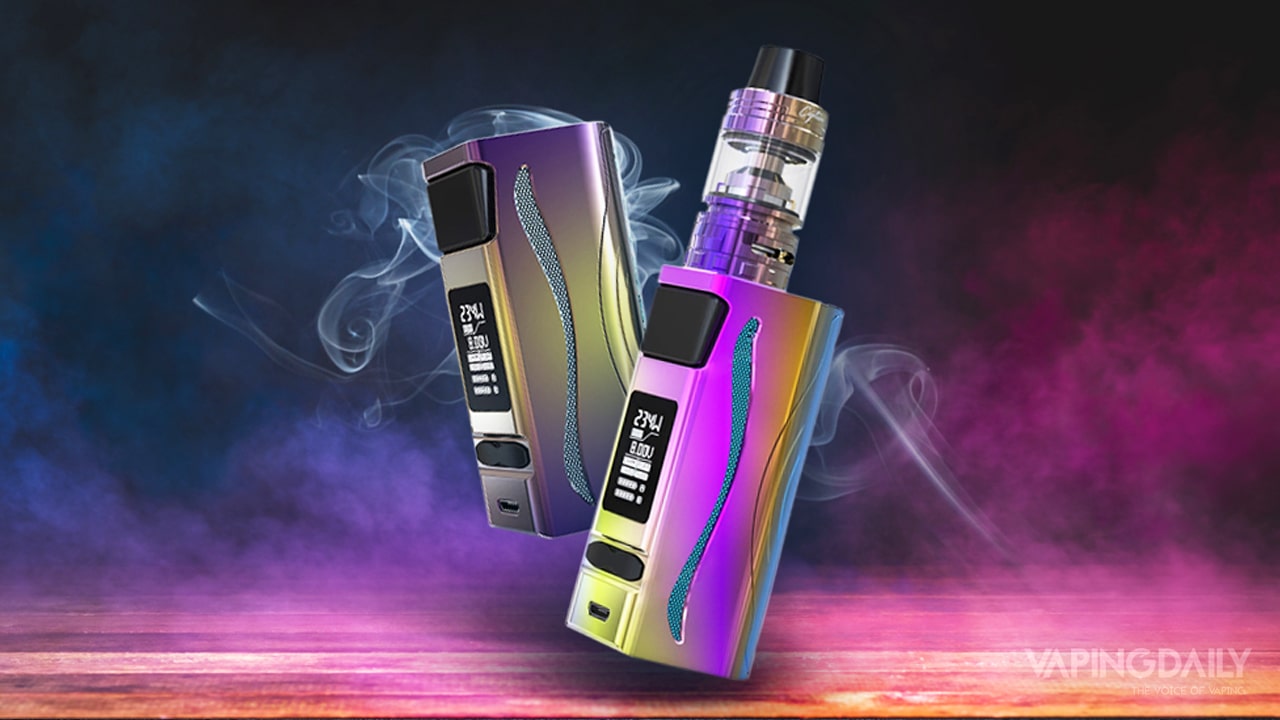 The only real differences between the Captain and the Genie not only have to do with their power outputs and capacity but also aesthetic differences; the Genie, if you will, is more enlightened.

There is an RGB light in the shape of a snake that extends along the side of the mod, which is customizable with at least five color options. And the back of the mod features a powerful LED flashlight with its own independent on/off button.

What’s Inside the Box

Upon receiving your new iJoy Genie PD270, here’s what you should find inside the box:

I was taken, at first, but the very prominent firing button on the front of the Genie. It is huge, responds very readily and presses down nicely. But everything about the Genie seems like its larger-than-life.

Underneath the firing button is the OLED screen that measures 0.96 inches. Despite the two removable batteries, the Genie can also be charged through the USB port located underneath the screen. You can also use the USB port to install the downloadable firmware available for the device from the iJoy website.

The other button(s) on the front of the mod is the selector switch that is one solid button that presses down either left or right. The top of the device sees a gold-plated, 510 connector that is given ample space to accommodate tanks up to 30mm in diameter with no overhang.

Overall, the Genie has the standard configuration of most modern box mods. Where the Genie starts pulling away from ordinary is in the aesthetic accents, specifically its arrangement of lights and the faux snake-skin or carbon-fiber stickers that you can stick onto the back battery door.

I already mentioned the side RGB lights, which, keeping in line with the “snake” theme of the stickers, is S-shaped and can be adjusted to flash in different colors, or turned off entirely via the main menu.

Usually, I’m not a fan of stickers on mods, but the great thing about these stickers is that they are entirely optional. You don’t need to use them to cover up any blemishes on the mod, and if you do apply them, they do add a little bit of edge to the overall look of the mod.

Getting a Handle on the iJoy Genie PD270

Concerning its vaping options, the iJoy Genie does grant its user many wishes. There are the three main vaping outputs of wattage, voltage, and temperature control.

Thankfully, the Genie also has a power boost mode, which has four options ranging from normal, soft, hard, and a user option that acts like a curve setting, so the mod delivers an extra kick at specific times and for a pre-programmed duration.

To turn the Genie on, you just click the firing button five times. The OLED screen displays all of its information neatly and in a well-organized way. There was no confusion as to what was what, and navigating the menu options was pretty intuitive.

The iJoy Genie PD270: The Vape

When I reviewed the iJoy Captain X3, I used both the included Captain sub-ohm tank and coils, as well as my Goon RDA so that I could breach the higher-wattage threshold, although I didn’t get all the way to the maximum power output. The Genie comes equipped with two coil options that differ slightly from the coil options with the Captain.

First off, the CA2 and CA3 sub-ohm coils are not threaded. In the place of threads, there are two rubber O-Rings on the top and bottom of the coil that let you snugly install the coil into the bottom of the tank base.

At first, I didn’t see the benefit or advantage of having this type of thread-less coil. Of course, there is a danger of the threads wearing out, but you get rid of them anyway so wearing out the threads should not be much of a concern. But still, points to iJoy for at least trying something different.

The two coils vape best at between 60W-80W for the CA2 and 60W-100W for the CA3. I decided to go in the other direction and see how well the Genie performed at lower wattages. I kept the pre-installed CA2 coil in the tank and set the wattage to 80W, and I was rewarded with a very enjoyable and flavorful cloud.

One thing that I liked about the Captain tank was the wide-bore mouthpiece that to my eyes was as wide as a crater. It made for excellent airflow and vapor delivery, especially when the bottom airflow vents were wide open.

How the iJoy Genie PD270 Stacks Up

One mod that instantly came to mind when I started thinking about what to compare the iJoy Genie to was the Sinuous FJ200 from Wismec. I already made the comparison to the Wismec RX Gen3 with the iJoy Captain, so I thought the Sinuous a better match for the Genie.

The Sinuous FJ200 tops out at 200W, and the included Divider tank comes with two sub-ohm coil options, the WS01 and the WS02 that are triple coiled and have very similar resistances to the Genie. So this contest cannot be settled simply on vapor production or quality.

Taking a look, then, at other factors, I found myself favoring the Genie over the Sinuous FJ200 for a very superficial reason and that was the customizability of the mod’s look. Stickers on mods have been a disaster in my previous encounters with them, but I liked the way the stickers completely changed the whole design of the mod.

While the Sinuous FJ200 had its eye-catching design, almost like a shrunken down version of Colossus from the X-Men, the iJoy Genie stood out more and had a better design layout.

The Good and the Bad

Since iJoy manufactures their own batteries, they could have easily made you pay extra for the two 20700 batteries, but including them in the kit was a very considerate move.

The Genie is a little overpriced. Granted, you do get a lot inside the kit (tanks, batteries, stickers) along with the built-in features, but at close to $100 for the entire package and similar mods being half that price.

I cannot believe I’m listing stickers as a pro, but these little add-ons changed (for the better) how I looked at the mod.

I have yet to discern a reason for the existence of a puff counter – there could be one, I just haven’t found it yet – but a locking feature has an obvious purpose and, unfortunately, the Genie did not have one.

You wouldn’t think that the addition of a flashlight to a mod would be that revelatory, but I actually found it quite handy since it was easier and faster to turn on the light on the Genie that it was to turn on my smartphone’s flashlight.

Many parts of the Genie contributed to its above-average performance. The CA2 coil was great, the boost feature boosted your vape and was even customizable, and the Captain tank was also superb.

I liked the iJoy Genie PD270 for all the reasons that I usually dislike a mod – LED lights, sticker back panels. These details have little to nothing to do with actual vaping, but the Genie had that factor covered already.

The Genie vaped exceptionally well, which is what I more or less expected, so I had to find something else that would make me recommend it. And those things were the equally important aesthetic differences that would make me proud to pull out my iJoy Genie and start vaping it.