The Mig Vapor Sol is a portable dab and wax electric nectar collector. It uses two different coil heads made from ceramic and quartz to vape concentrates. The device has 2-in-1 functioning so vapers can use it as an e-nail (nectar collector) or a traditional dab pen.

The unit has an internal 400mAh battery. It also features a hidden compartment for storing concentrates. The Sol also has three separate temperature settings. Vapers can access different settings through the single firing button.

The Mig Vapor Sol is a unique, 2-in-1 Electric Nectar Collector. It construction hides two ways to vape dabs and waxes. The top cap on the Sol is also a chamber that has a dual-quartz atomizer to vape concentrates the old-fashioned way. 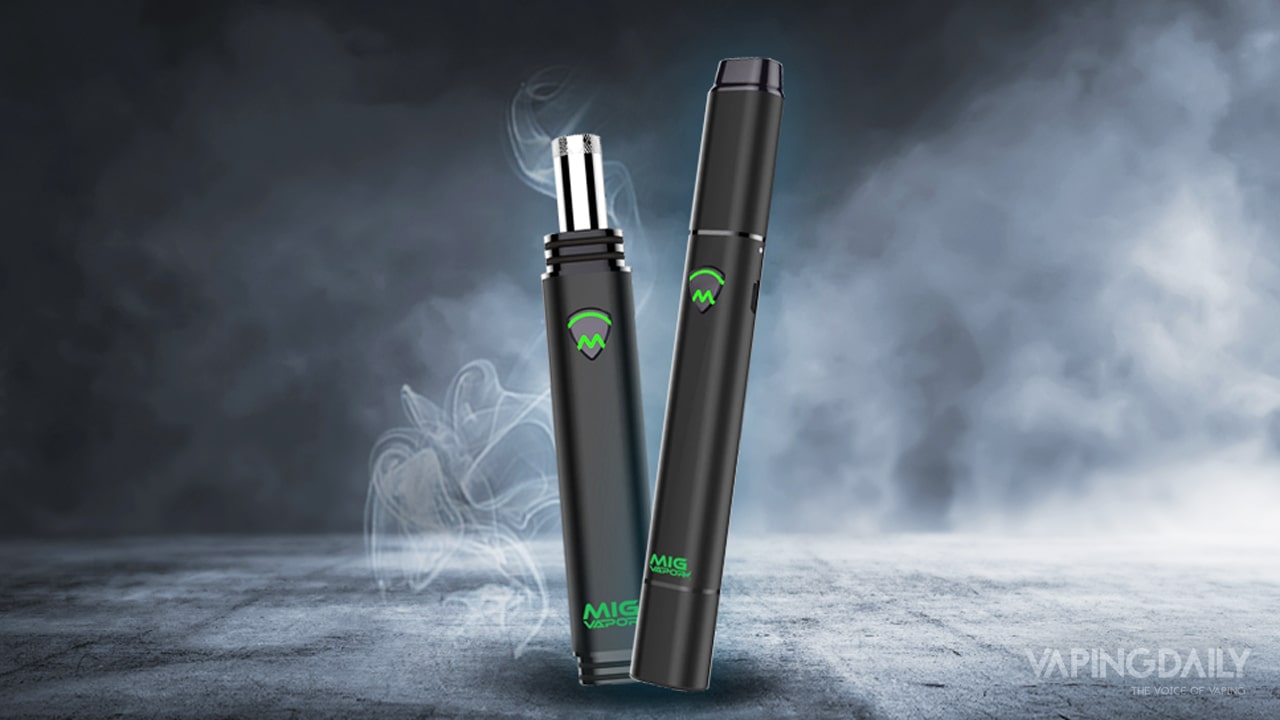 The Sol also functions as a nectar collector, which is a different type of vaping device. Nectar collectors work by using a super-heated tip made from, in this case, ceramic. The tip heats up like a regular atomizer, but the user touches it to their material to create vapor, rather than loading it into a chamber.

The Sol uses a special all-ceramic tip to vape this way. Users can attach either of the device’s atomizers to the top of the battery, and use them how they please. The top cap is removable and connects to the bottom of the device when the C1 Touch coil is in use.

There is only one power button on the unit’s exterior. It features an LED light that indicates current power levels. Vapers have the option of choosing from three separate temperature settings. There is also a hidden compartment within the entire vape’s design. Under the battery section, users can snap off a lid that reveals a ceramic chamber.

When users want to use the Sol as a traditional, top-loading dab tool, they need to first affix the dual quartz atomizer. If they are going to use it as an e-collector, then they need to attach the top cap to the bottom. This makes the unit more comfortable to handle but acts as the mouthpiece as well.

There is a USB charging port at the base of the Sol for users to charge the internal battery. Charging the device to full capacity takes between 2-3 hours, which is long for a small capacity battery.

When in use as a traditional, top-fill dab pen, users need only remove the top cap to load their materials. The chamber is a little narrow, but there is no problem loading small dabs onto the dual-rod atomizer. 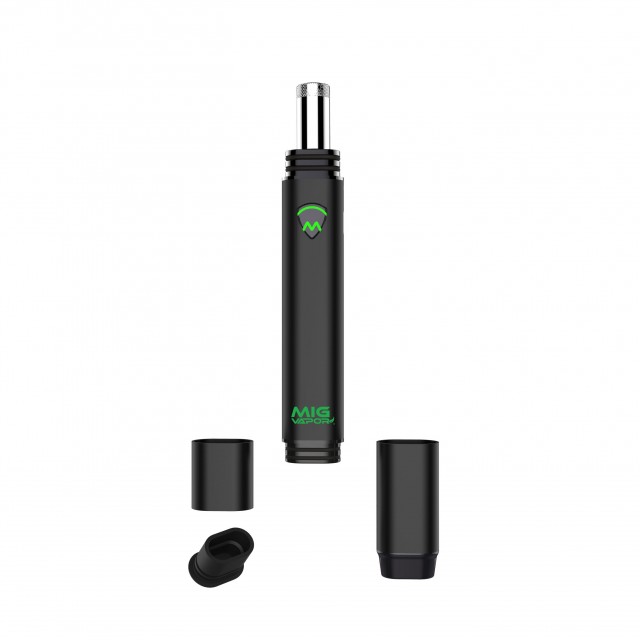 With the battery charged, and the chamber loaded, users need only click the firing switch five times to turn on the device. The LED light will flash, and users need to select from the three, color-coded voltage settings.

To select any of the different voltages, users need to press the button three times. A green light is the lowest setting, at 3.4V. The next setting is 3.7V represented by a blue light. A red light indicates the highest setting of 4.2V.

The variable voltage function also works when the device is in Touch mode. Users can switch between the three power levels with the ceramic C1 Touch coil. Changing between the two different coils needs little effort on the user’s part.

Users first need to switch off the device and make sure the dual-quartz rod atomizer is not hot. They need to remove the cap, attach it to the base, and then screw off the quartz attachment. They then need to connect the all-ceramic piece to the top and turn it over, so the tip is facing down like they were writing with a pen.

With the device on, and the temperature setting selected, users press and hold the firing button to power the coil. The heat-up time is instant. When the tip is hot, vapers only touch the coil to their material and inhale the resulting vapor.

The unit works like a straw that heats materials with its tip and creates vapor that the user then inhales. Of course, users should not touch the tip, or put it in contact with any other material, like plastic or silicone. Users should keep their dab or wax in a glass or metal tray so as not to melt the plate. The tip gets very hot but cools down fast when not in use. 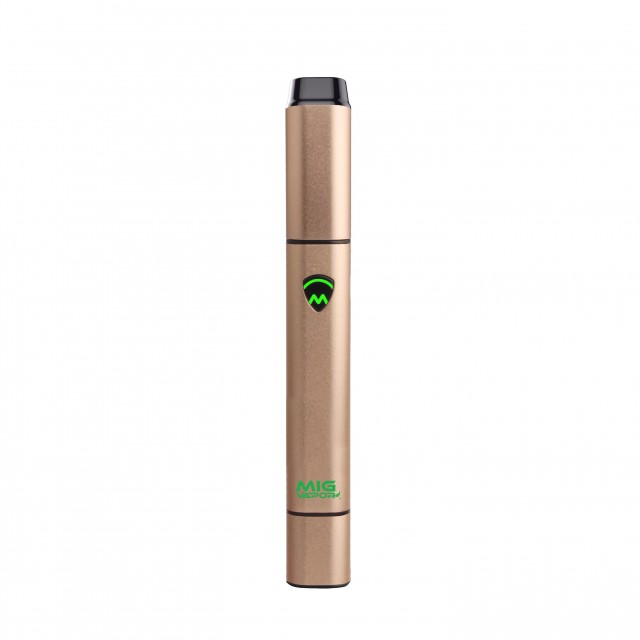 The Sol produces a superior quality vapor both as a top-fill dab device and as a nectar collector. There is no deciding between the two functions. Vapers used to the traditional setup of a dab pen with a quartz atomizer will be happy.

Vapers who prefer a unique way to vape that also produces great-tasting vapor will also be happy. Switching between the two vaporizer modes is very easy.

The air path of the vapor goes through the entire device, but it does not taste bad. Traditional nectar collectors are usually all glass, with ceramic or quartz attachments. Users heat one end with a torch to get it hot, and then press it to concentrate.

Those air paths are purer than with electrical honey straws. Some non-electric nectar collectors also use water attachments to refine the vapor even further. Without those features, the Sol still manages to keep vapor quality high.

The top-loading dab atomizer goes directly into a vaper’s mouth, as it does not have to travel far. The mouthpiece is right above the chamber. The different power settings also change the vapor quality.

The highest, which is 4.2V, is not a usual level. It is a bit high for a dab pen, so it does use material a lot faster than the lower settings. The vapor, both size, and quality are much higher though.

The Mig Vapor Sol vs. the Boundless CF-710 vs. the Linx Ares

The Boundless CF-710 has a tough, sturdy stainless steel exterior. It is not heavy, but wide, and features an internal 900mAh battery. The device has a dipstick design, so it works like a nectar collector. It also has quartz and ceramic coils. The device only has one power switch, but it does have any variable voltage settings.

The Ares also has a sleek, stainless steel exterior, and uses a ceramic heating element to vape dabs. The top cap is magnetic, so it stays secure to protect the mouthpiece and ceramic tip. The device is a tube-style pen, with an internal battery capacity of 750mAh, and two temperature settings, high and low. The Ares only functions as a honey collector; it does not have a top-fill chamber for dabs.

Have you ever tried an electric nectar collector? If so, do you think it creates a cleaner vape than regular atomizers? If not, are you interested in trying one? Please tell us your thoughts about the Sol in the section below.

The Mig Vapor Sol E-Nectar collector is a unique, one-of-a-kind device. It surpasses most other devices that are either one of two things. They are only a nectar straw, or they are just a top-fill dab vape pen. The Sol is both of those things, with a hidden compartment in its design for storing material.

The Sol also has variable voltage settings, which, as seen by comparing it to the competition, is a unique thing. Vapers who want to conserve their material can opt for the medium setting, and use the dipstick sparingly.

The option also exists though to blast the device at full power, and take massive hits, if a vaper so desires. That versatility is what makes the Sol stand apart from the rest. 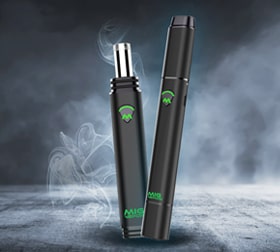