Wow! There’s not many like these out there right now. The Ares from Linx might as well have come straight from Mount Olympus given its out-of-this-world design and features. The Linx Ares is an extracts pen that has no interior or exterior chamber to put your waxes.

The device features a bottom heating element that vapes anything it comes into contact with while funneling up that vapor through a glass mouthpiece. So it’s like a vape straw, which might seem like a novel, forward-thinking idea except it does have some drawbacks which we’ll get to later.

Wow! There’s not many like these out there right now. The Ares from Linx might as well have come straight from Mount Olympus given its out-of-this-world design and features. The Linx Ares is an extracts pen that has no interior or exterior chamber to put your waxes.

The device features a bottom heating element that vapes anything it comes into contact with while funneling up that vapor through a glass mouthpiece. So it’s like a vape straw, which might seem like a novel, forward-thinking idea except it does have some drawbacks which we’ll get to later.

The Linx Ares flashing its subtle ferocity comes right when you receive the package, which is beautifully colored white with the eye-catching Linx logo inked out in red.

Inside the box you’ll find:

I believed I mentioned “wow” somewhere earlier. I think that sentiment still stands. It’s always gratifying to see a company pushes the boundaries of what is and is not possible. The Linx Ares is the manifestation of a desire to truly see where vaporizers can go.

The stainless steel design scheme is something remarkable to behold. I was immediately impressed by it; it drew me more and more into the device. Picking it up you notice its smooth touch and its lightness since it only weighs in at a little over 70g. 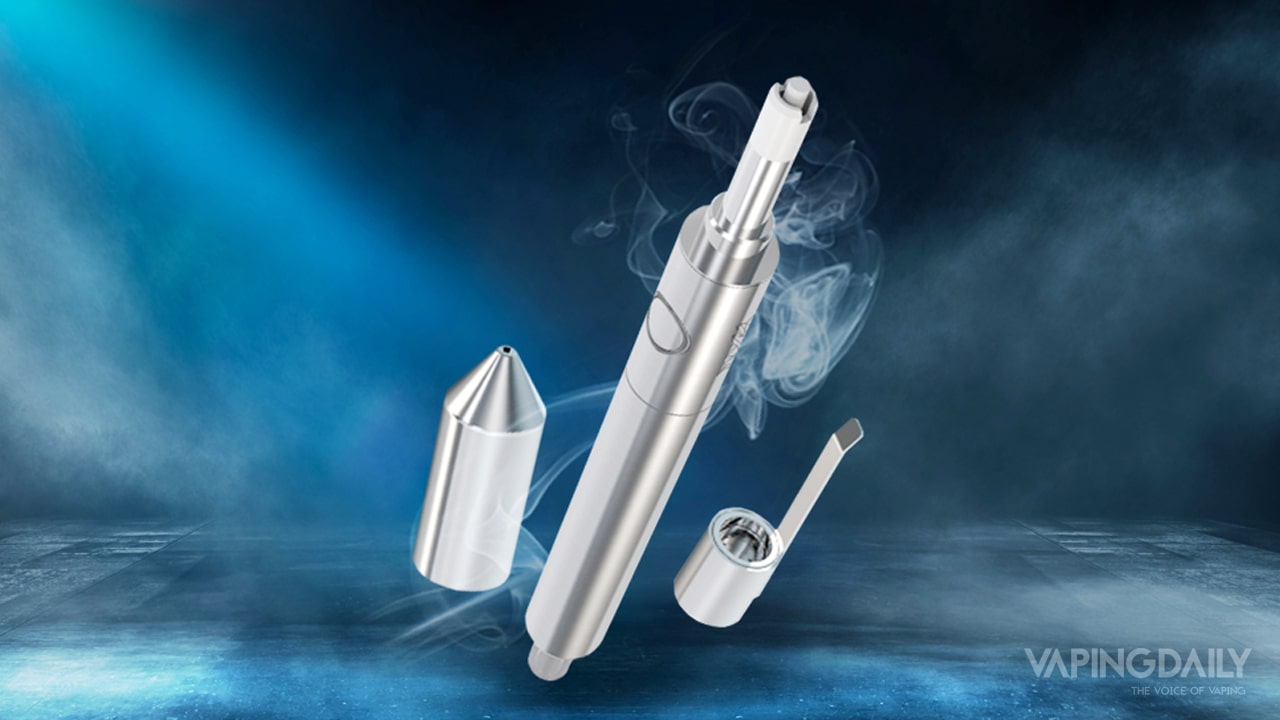 The two caps also make the Linx Ares resemble a fountain pen when attached. But that seems like it was more of an afterthought than a serious design intention. I didn’t mind that it took on that guise since I was more impressed by the other end of the Ares.

The coil-less ceramic heating element at the end of the Ares makes the mod take on the look of a medical tool, or God forbid a dental tool. But the Ares functions in a very similar way to a soldering tool or small welder.

The vapor path into the mod contains all premium materials like stainless steel, glass and ceramic, so you don’t have to worry about getting any unwanted materials mixed in with your vapor. All you need to do to vape is to fire the trigger button, while holding the heating element in a container, and inhaling, at the same time.

Ha! Ha! The joke’s on you; you don’t even have to load the Ares. That’s the whole point. Except, I wouldn’t think this arrangement ideal necessarily. I know we all gripe about having to load a device and how it can be difficult sometimes, but at the other end, having something already inside the device is much more preferable.

Having to remove both the Linx Ares and my container is already a negative for me. Sure, you might say that the Ares has no extracts chamber, but it does, and I have to hold it every time I want to vape. There’s your container.

But this cumbersome detail is only a problem if you are on the go, I would imagine. Having the Ares around for when friends come over would be a more suitable setting for the Ares, but I wouldn’t dream of taking it outside.

Putting the Linx Ares Together

The Linx Ares is more or less assembled upon arrival. The two caps at either end come off easily, and it charges through a USB adapter included in the kit. Charging time took around two hours, and I would reckon I went at least a full day of moderate use before I need to charge it again.

You can also unscrew the air tube from the battery unit, which is housed inside the airflow tube but kept sealed from the vapor stream. Again, due to the number of parts that come with the Ares, it’s a nightmare to try to keep the whole kit intact, especially if you are going out.

This was yet another reason I would say the Ares best suits a home environment.

I was curious to see how the Linx Ares performed since it is one of the more interesting rigs out there, completely different from what I’m used to. I wondered about how the Ares kept vapor from escaping without it being housed inside the device.

I saw there was a little nipple at the end of the element that kept the vapor from escaping and also kept the actual wax inside the container from getting into the air tube.

I tried it on the highest setting, and when I pressed down into the wax and started to inhale, I immediately felt a fresh, airy stream, so it was an extremely clean cloud. But the lowest setting also provided a significant mouth-to-lung hit with just a little less vapor cloud.

The only thing was that you had to have a significant amount of extract in your jar for the Ares to work best. And it’s no problem to get the atomizer a little juicy since you have to press into the wax to get the best results.

I was worried that I might press too hard and break off the heating element, but it was sturdily built and showed no give when I started to press harder.

It was hard to find something to compare the Linx Ares to, given its unique design and function. I settled on comparing it to the Mig Vapor Yabba Dabber since it’s slim, pen-like shape reminded me of the Ares.

The Yabba Dabber is a conventional loading dab pen, so of course, the Ares beats it there, but the Yabba Dabber has a comparable battery power of 500 mAhs to the Ares’ 750 mAh battery. The vape I think is much cleaner with the Ares since it flows straight up into the stainless steel air tube.

The Yabba Dabber has something comparable though, with its ceramic disk atomizer that also gives good, clean vape. While the Yabba Dabber is reasonably priced and can vape two materials, I think for the sheer novelty of what the Ares can do and how it does it gives it top place.

The Ares impressed in both aesthetic and technical design aspects. Of course, the main event was the unconventional honey straw, nectar collector, whatever you want to call it, vaping mode of the Linx Ares. But this innovation coupled with a bold, confident and seamless stainless steel scheme was perfect.

Surprisingly enough, rather than making for a more effective vape session, the Linx Ares gave quite the opposite. I would’ve imagined being able to localize heat to a specific point made it easier to get those little drops of dab that get away. But instead, I found that the Ares only worked well with a good portion of wax.

The Ares battery has only a 750 mAh, but it still powers the ceramic heating rod to temperatures of 900 and 1100 degrees Fahrenheit. That is an economical and efficient use of power if I ever saw one.

The ceramic rod has a safety warning written on it, but still, the rod does get incredibly hot, and I can already see the tons of mishaps that might befall a careless vaper who has an 1100 degree lightsaber in his hands.

The unconventional heating element design made for some superior flavor sessions. There was awesome, clean, pure, straight from an Arctic glacier pure, flavor notes coming off the Ares. This was thanks to many reasons, and the results were superb.

The Linx Ares certainly impresses with its innovation and incredibly well-crafted build. It almost seems too good to be only a dab pen. The Ares sells for a little over $100, but you know where your money is going.

High-grade materials (steel, glass) and spotless finish and the latest in ceramic rod technology all combine to keep the Ares running for a very long time. The fact that you don’t have to load the device means it doesn’t undergo the same wear and tear that hampers other mods.

The vapor production is exceptional, clean-tasting and refined. The Linx Ares does have some safety issues and does suck up a lot of wax, but for the benefits of having a unique, and powerful device, I would say buy it, but be careful with it.