Mig Vapor Keymaker – Consistent Vapor is the Name of the Game

Mig Vapor KeyMaker is the most inconspicuous of all the vape wax pens reviewed. From the stylish design, this portable dab pen can be confused with an electronic cigarette – until the first puff from the wax inside, which packed a hefty punch. Inside the black box the user will get 360 mAh Pen-Battery unit, Quartz Rod Atomizer, Ceramic Rod Atomizer, 4 Silicone Mouthpieces, Dabbing tool, USB Charger and a Non-stick Silicone storage container (for keeping waxes and concentrates).

The Keymaker, after careful review, is Mig Vapor’s best dab wax pen vaporizer for vapers who prefer to fly under the radar, even though it does not vape oils. The vape pen is available for the lowest price directly from the manufacturer’s online store.

The portable vaporizer pen unit has an elliptical design that is surprisingly light and compact for a dab and wax rig. It is black in color and comes with literally everything the user needs to fire up a dabbing session – apart from the actual concentrate or oil of course. The Keymaker vape comes in a choice of Stealth Black or Spanish Silver. Once assembled the Keymaker pen measures only ¾” x 4.5” tall.

Sleek and Stylish Keymaker with a Full-Flavor Kick

The vaporizer pen is easy to assemble and use, and makes a great starter setup for anybody getting into vaping waxes & concentrates.

Mig Vapor’s Keymaker vape pen comes standard with Ceramic Rod Dual Coils (for a more controlled, even flow) and Quartz Crystal Rod Dual Coils (for more potent vapor production). The coils feature a low-resistance design, which extends coil life by producing a slow, steady vape. The Ceramic Rod Dual Coils made for a heady vaping session. Dual Quartz Rod Coils got onto temperature slightly faster than with the ceramic coils, and the vape quality was still excellent, although not the best.

The onboard temperature controls cap the chamber at 455 degrees Fahrenheit, which produces the optimum vape while locking in all the natural flavor of the wax. Temperature build takes around 2 to 3 seconds, and, upon review, the unit stays on a consistent heat for a moderate to an above-average amount of time. Both the ceramic and quartz coil setups get powered up to a full watt’s worth of output – which is more than the user would expect from a 360 mAh battery.

Getting the Keymaker Ready for Action

The 360 mAh battery is pint-sized, exactly what the user reading this review would expect from a portable wax vape pen. It will not give the user the same battery life as the bulkier wax pens, so there is a need to charge it more often; the unit can be used while charging though. The chamber gets quite hot with long vaping sessions – do not let the tiny battery fool you.

A smaller battery also means it charges in 60 minutes flat. However, the battery life is not as bad as you think since the pen does not put too much pressure on it.

Setting the device up is simple and quick:

Temperature build took the standard 2-3 seconds. Vapor production is very similar to the other pens in the same pricing range, with a good tasting draw, hit after hit. The low temperature, non-combustion tech of the coil locks in flavor, which aside from the unit’s portability is our favorite part of the Mig Vapor Keymaker vape.

As with any wax vape pen, the user will want to make sure the connections between the different components are kept oil-free by wiping them with a paper towel. Be sure not to overfill the tank, like with oil tanks, as this could cause the materials to bubble and spill. Overfilling the heating chamber could also result in a battery short circuit which will not be covered by the manufacturer’s guarantee.

What Are Similar Products on the Market?

The Yocan Evolve Plus comes at a slightly steeper price than the Keymaker. Like the Keymaker, it vaporizes wax, and has a quartz atomizer. It also only takes 3 seconds to heat, like the Keymaker. However, the Keymaker offers both quartz and a ceramic atomizer, whereas the Yocan only offers quartz.

The unit feels good in the hand, according to this review, and the components, like the coils are well crafted. On assembly, the coils snapped firmly into place, and they were easy enough to take out. The Mig Vapor Keymaker is a precision-machined dabbing rig.

Portability is a big plus on this one, and the unit resembles an e-cig more than anything else. It will not draw any unwanted attention and should fit snugly into the pockets of your jeans or button shirt. It is a godsend for those who like to vape on the down-low. 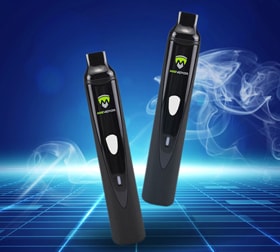