The Drop Solo RDA is an update to the original Drop, which was a collaboration between Digiflavor and the Vaping Chronicles. The new Drop tank has a shortened design, along with two possible top caps, one transparent, the other stainless steel.

The Drop Solo also features a dual-post build deck that supports only single-coil builds, a departure from the original Drop. The new Drop, though, retains some of the original’s features. The Solo has the same T-shaped airflow vent that has ten individual holes.

A Close-Up Look at the Drop Solo RDA

The new Solo has a few features of the old one, but with some improvements. The Drop Solo comes with two different top caps, one made of acrylic glass (Plexiglass, essentially) that is a few millimeters shorter than the standard stainless steel top cap. Users can remove and replace the top cap to their heart’s content.

The Plexiglass top cap has, because of its shortened stature, fewer airflow holes than the SS cap. The Plexiglass does not fundamentally change the unit, except for this small difference. Users can also mix and match the top caps with the two drip tips also included in the kit. They are both 810-compatible with the only difference between being their height (one is taller than the other). 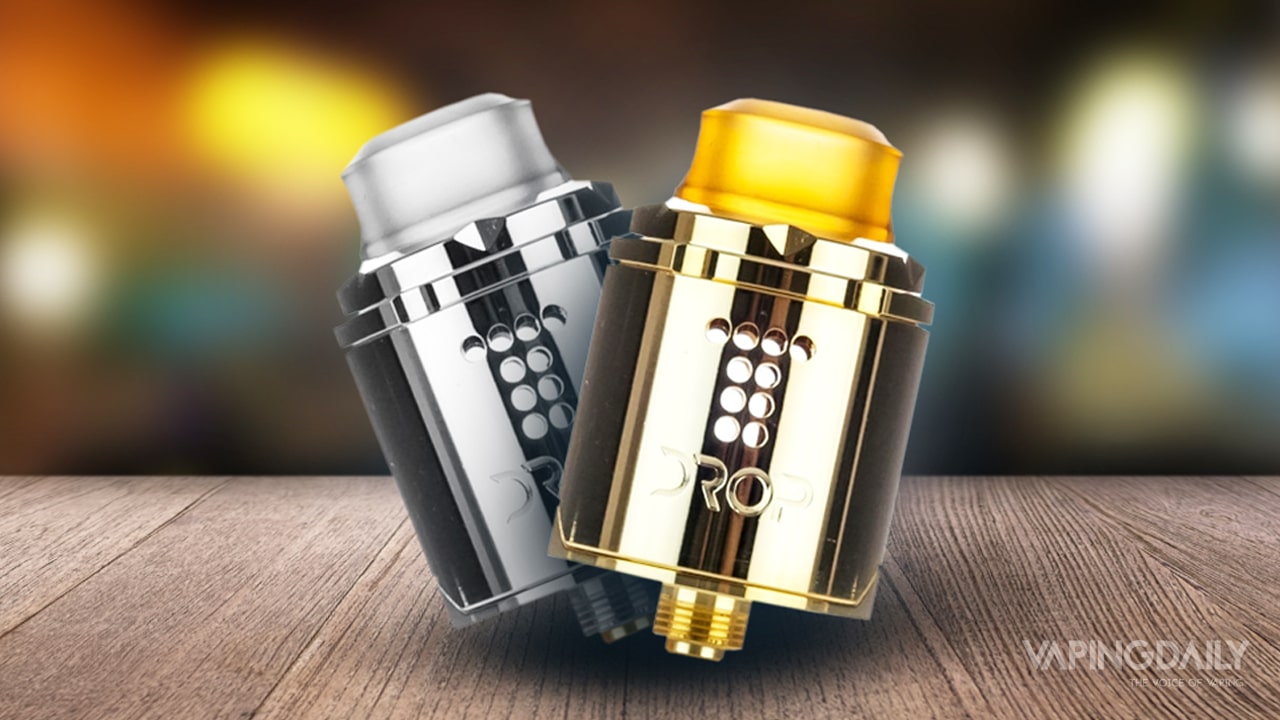 The top cap is not all one-piece. The drip tip attaches to the airflow control piece, which, in turn, press-fits into the barrel of the RDA, which has the airflow holes (there are ten on each side, for a total of twenty). The airflow ring has some notches along its top lip that makes it easier for users to adjust the airflow. The Plexiglass cap also has these notches but a different airflow control ring, also made of Plexiglass.

As it is only a single-coil atomizer, the overall shape and size of the RDA is slimmer and more stout than the first Drop. As such, it has a 22mm diameter (0.86”), which makes it suitable for single-cell devices even though it might look a little out-of-place on anything bigger like a dual-18650 mod.

For these larger mods, the atty comes with a separate beauty ring that has a larger diameter (24mm or 0.9”) so it blends in with the larger-surface mods. Users can also attach the beauty ring to any sized mod, as it supports both the SS top cap and the Plexiglass one.

The Drop Solo comes neatly packaged in a foam insert that holds the stainless steel barrel, with the Plexiglass top cap underneath.

The rest of the kit’s contents can be found under the insert.

The new Drop has the same basic exterior as the original. What’s different is the build deck, but more on that later. The overall metallic sheen of the device – it comes in three colors, black, gold, and stainless steel – is crisp and gives the impression of quality craftsmanship. But for vapers who prefer the frosted, transparent look of the other top cap, the Plexiglass covering gives them that satisfaction with its unique appearance.

The biggest innovation of the Drop Solo’s build deck – simple, but effective – is that it has two posts instead of four, like its predecessor. That’s the major change between the two and it works. For users who prefer a more flavorful vape over huge clouds, the single-coil configuration can provide that. The build deck is stainless steel, and the two posts sit more to one side of the terminal, which leaves a lot of room to mount different style coil builds.

But the beauty of the atty is that it lets vapers mount their coils how they want. They could install the posts on the side facing the build deck, only that way the airflow would take longer to reach the coils. Being mounted from the top, lets the coils get hit directly with air.

Again, though, the deep juice well also means that users need to make sure their leads are long enough for the coil to bend to reach the deep well. There is a regular-510 pin pre-installed into the atty, but the kit includes a squonk pin, and the design of the atomizer also lends itself to becoming a bottom-feeder given its size and ample juice well.

The Air in There

The original Drop gave rise to the multi-slotted, multi-level airflow design that has become popular on other Digiflavor and GeekVape atomizers like the Mesh Pro. The stepped design is a literal windfall as it gives users an amazing amount of versatility. The airflow control ring inside lets users expose or close as many of the holes as they want.

The holes are stacked in twos, with the top line of the “T” holding four holes. The ring covers up to one, two, four, or all ten of the holes so users can play around with it to find the pairing that works best for them. And, as there are two “T”s – one on either side – the air intake is massive, which may require some fine-tuning.

The placement of the posts is also helpful. The pushed-back placement puts any coil build directly in front of the air intake holes so any build gets blasted with air. Of course, with the airflow control ring users can decide how much air, or how little, actually gets into the chamber.

The combination of the reduced-size build deck with the same airflow control style as the original Drop makes for some quality vapor. The unit has two operating modes, as a dripper or a squonker, but it performs well in any mode. Users who want a mellower, flavor-based vape can mount a single-coil like either one of the two pre-wrapped 0.35 ohm coils in the kit.

The Solo also allows for a ton of versatility. Users are not limited to installing their coils in a certain way. They can get creative with the many openings on the posts and mount them in unique ways.

The many parts included in the kit also gives vapers a lot of room to experiment. They can play around with the caps, although the effect on vapor quality is minimal. The larger, stainless steel cap can maybe provide more room in the chamber for air to build-up, but there is not much difference with the Plexiglass cap. Users can also mix and match the caps and drip tips, giving the dripper even more customization.

The Dead Rabbit is another atomizer made with the input of a popular Internet vape review, Vapin’ Heathen and it has many similarities to the Solo. The Dead Rabbit has a different airflow configuration as it has only two slots on either side that provide air intake.

The base of the atomizer measures 24mm, so it is a little wider than the Digiflavor atomizer. The build deck has four posts and it’s also squonk-compatible. The kit includes two 810-drip tips, one made of Delrin and the other acrylic.

Yet another reviewer-designed RDA, the Recurve from Wotofo is the brainchild of Mike Vapes. The Recurve is a single-coil atomizer that features a narrowed barrel and two 810-drip tips, along with a 510-adapter. The Recurve has a curved shape but also uses the multi-hole airflow control ring that is fully adjustable.

The build deck has a sloped design and features four side-secured hex screws that secure single-coil builds. The deck uses a PEEK insulator to keep heat transfer minimal, while it is also 510-squonk ready.

The Drop Solo RDA bursts with versatility. There are two different top caps and drip tips made of different materials. Users have a wide variety of airflow options thanks to the innovative airflow configuration. And it comes with both a regular 510-pin and a squonk pin. The build deck has a diminished size, but it opens the chamber up to allow for a deep juice well, as well as a lot more room for vapor to accumulate.

The fact that it is a single-coil unit also means it is not so difficult to mount coils. The fact that there are pre-wrapped coils included in the kit also means new users should not have a problem vaping on the RDA. It performs well as both a regular dripper or a squonk, even though it may be more suited to smaller mods with single-cell configurations.