The fun continues here at vapingdaily.com since today I’ll be reviewing a Goon RDA from a mythical and innovative designer blueeyedgoon83, whose Instagram page is full of his coil designs that up-close look more like metal pythons or what H.R. Geiger’s builds would look like if he designed atomizers.

The Goon RDA is his collaboration with 528 Customs, and it is a drip tip atomizer that has two gold/brass-plated platforms inside the build-deck, held down by hybrid Phillips-head screws. The atomizer itself is available in different colors and various materials from stainless steel to copper.

Since in this review I’ll be taking a look only at the Goon RDA it will be a taking a different format than my usual reviews. I’m anxious to see if the Goon RDA performs as well as its creator’s reputation dictates.

The Goon RDA kit comes with everything you need to build and maintain your RDA:

You can tell right away that the Goon RDA is remarkably well-built; it just screams out craftsmanship. The outer section is well-finished with that stainless steel sheen that I love, and the black Delrin drip tip complements it nicely. Even the way the 528 logo is etched into the metal was fantastic.

The 510 connector pin protrudes out well to make a secure connection with any compatible mod. The diameter of the Goon sits at a stubborn 24mm, so it’ll overhang on most standard devices unless you have a mod that can accommodate 25mm. 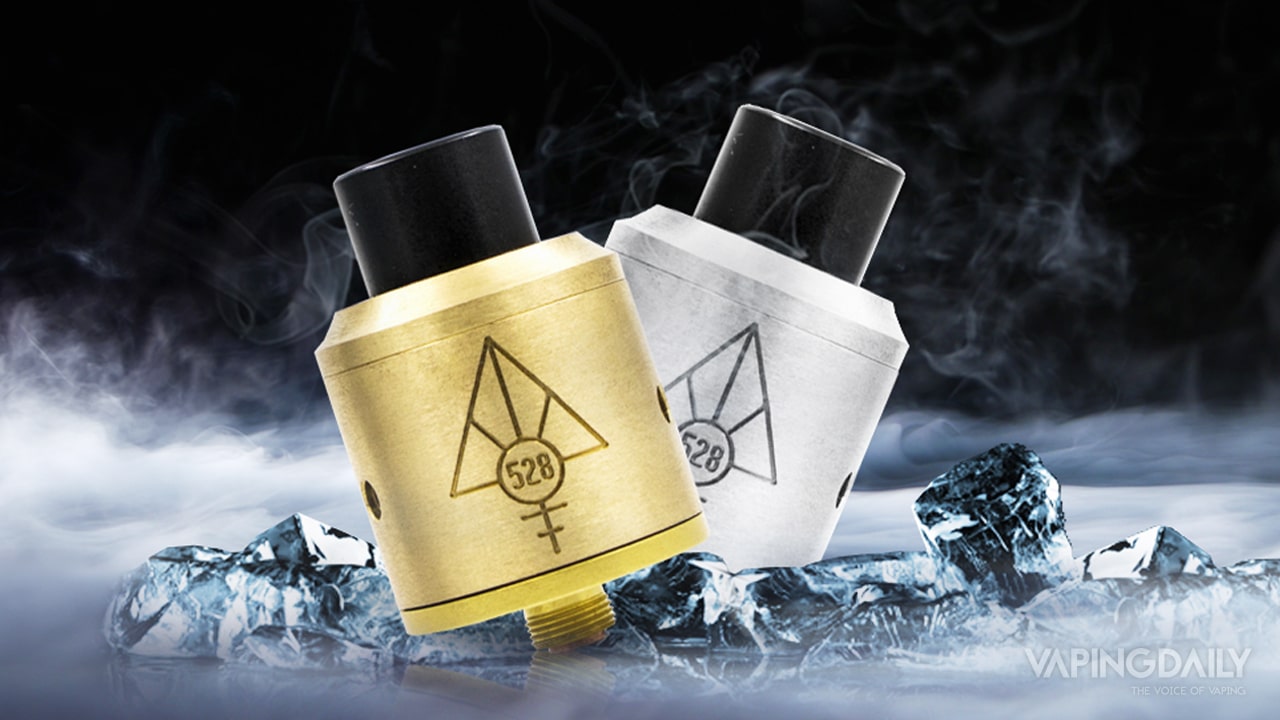 The drip tip comes off easily enough, and when you do remove it, although you can’t quite see it, there is an eternal o-ring inlined into the build that supports the mouthpiece. The other great feature of the Goon is the three airflow holes on either side that you can adjust by turning the device.

All the other parts come apart easily and get put back together with a satisfying snap. Nothing felt wobbly or out-of-place or like it wouldn’t hold. When you take off the top cap, you can see yet another black o-ring that keeps those two parts together.

And now, taking a look at the real star of the show – the deck and coil build – you see two platforms made of gold-plated brass that have two Phillips-head screws holding each of the clamps in place. The entire chamber is wide, which is something that I liked. The bridges and the clamps were all smoothly finished since they are made of brass.

The screws themselves are a hybrid between a Phillips-head and an Allen key, but they were easy to remove with tools provided, or if you have your own. I measured the width of the bridges to be around 8mm.

I thought it was interesting that the positive clamp was attached to the center post, while the negative was held in place by a Phillips-head screw that you could adjust from underneath, next to the 510 pin.

I wondered for a while why they both weren’t attached to the center base, and then I realized that the separate attachments meant that the negative post didn’t take up so much space in the chamber. 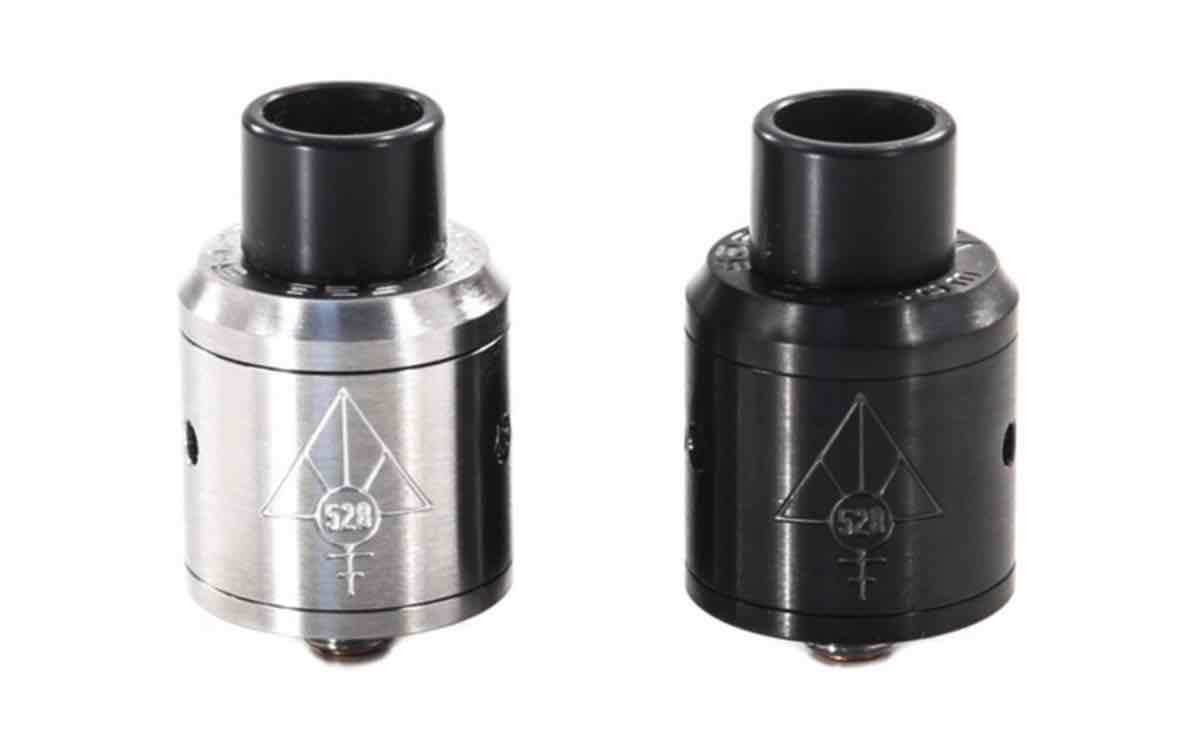 The juice well on the Goon RDA is a profound 6mm, so it has plenty of space to last you a good while. And since the entire build itself is broad at 24mm that’s just more added space to fill in your juices. So that just goes to show that you don’t need a taller chamber to add more liquid capacity.

Depending on the type of mod you attach the Goon too, I would think that you would be able to get at least through one vaping session after one fill. Since the Goon RDA is a heat-seeking, juice-sucking RDA, I found that vaping at close to 100W was good enough to get the full amount of flavor, while only have to re-fill about twice.

Building on the Goon RDA

With all the features of the Goon RDA – the wide bridge posts, no post-holes, the large chamber – I still decided to go with a 22g Kanthal wire build since the airflow and the heat in the chamber can be adjusted with the airflow holes.

I’ve read some other builders suggest that a thicker gauge coil, preferably a 26g coil would be ideal for the Goon RDA since it sucks up so much juice (the electrical and e-juice kind). But I wanted to start it off with a basic wrap and coil to see if the Goon could elevate the performance of those basic materials.

But, what the hell, I decided to throw in a parallel Clapton build as well. I did eight wraps with the 22g Kanthal and another eight wraps with 26g Clapton coils on the opposite side. Putting the leads into place didn’t present much of a problem since the clamps held the leads very well.

I’m more of a flavor person, so I normally use organic cotton for my wicks, although I’ve lately become a fan of stainless steel mesh that delivers pure flavor bubbles. After building my coils and wicking them, I was ready to test out the Goon.

I decided to keep it in the family when choosing my mod, so I paired the Goon with a 528 Customs mod, the Drip-tech mech mod. I started with the minimal amount of airflow, so I kept the first hole about halfway open.

Only this didn’t mean the hole at the opposite end was completely closed off, which wasn’t so much of a problem and I was curious to see how it would affect the airflow. I fired my mod, and the vapor emerged effortlessly; there little to no resistance to speak of, even with the restricted airflow. 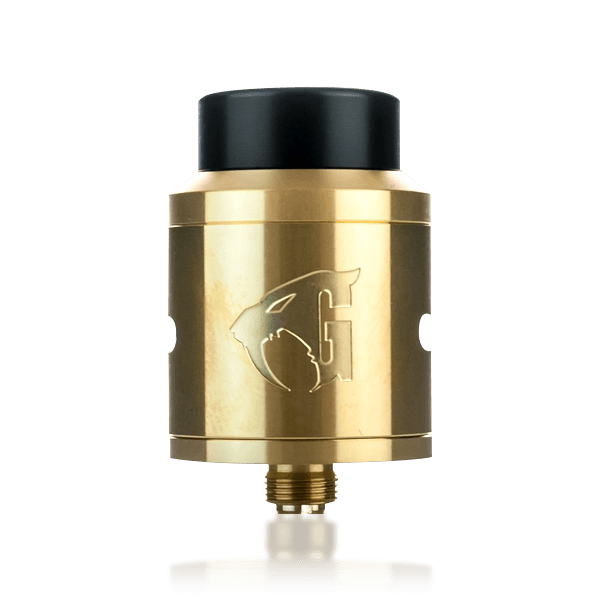 Opening up the airflow holes, even more, just increased the pleasure I got from vaping with the goon. I felt like I was drinking the vapor more than inhaling it. But that was just for the vapor. When it came to flavor, I wasn’t as impressed.

Maybe it was the build I put into it – even though I did check to make sure the coils heated up evenly – but the taste was a little off. Either way, I won’t pass off that defect to the Goon.

The Goon is almost in a class by itself for the mere fact that it is a moderately priced RDA that is beautifully machined and performs well. Comparable RDA’s like the Tsunami and Freakshow are equally great performers (although I wasn’t a fan of the Freakshow’s three-post build) that are priced much lower than the Goon.

So merely for the price point that it comes in at, I think the Goon is a great mid-range RDA that appeals to both veteran vapers and those beginners looking to up their game to something more advanced.

The clamps system rather than the post-holes did present a bit of a challenge when I first saw them. But, not being one to shy away from a challenge, I quickly became a fan of the customizability and ease of use that the clamps gave over the sometimes trickier to use post-holes.

Like I said above, one of the clamps on my posts bent a little weird, and it was a bit distressing to see since the rest of the atomizer was so beautifully designed and built, but I don’t think it took away from the performance.

Three adjustable airholes (ha! “Airholes,” I think I found my favorite new insult for someone) allowed for great airflow that only got better the wider I opened them.

The Goon is supremely well-built. The clamps I found did bend a little weird when I screwed them in, but I didn’t find that it affected the performance of the coils. Inside and out, the Goon looks great, feels great, and works like a charm.

The Goon RDA from 528 Customs did not disappoint whatsoever. It is quite beautiful to look at; it was easy to handle and build with. I liked the clamps system as opposed to the post-holes that can sometimes be frustrating.

The drip tip was gigantic and offered great direct-lung hits and the airflow! The airflow delivered every time I took a draw. I wasn’t so impressed with the flavor, but it was good enough to satisfy me.