The Blotto RDTA is a collaborative effort between Dovpo and the Vaping Bogan aka Sam Parsons, who is a popular vape reviewer on YouTube. The Blotto has a 25mm diameter and has several e-juice capacities thanks to the many glass options in the kit.

A Up-Close Look at the Blotto

The Blotto stands out for its size. The tank atomizer has a tall and hefty build, which is complemented by its excellent machining and build quality. The Blotto features an all stainless steel build with an optional all-ULTEM bubble section that increases the base e-juice capacity to 6ml from 2ml. 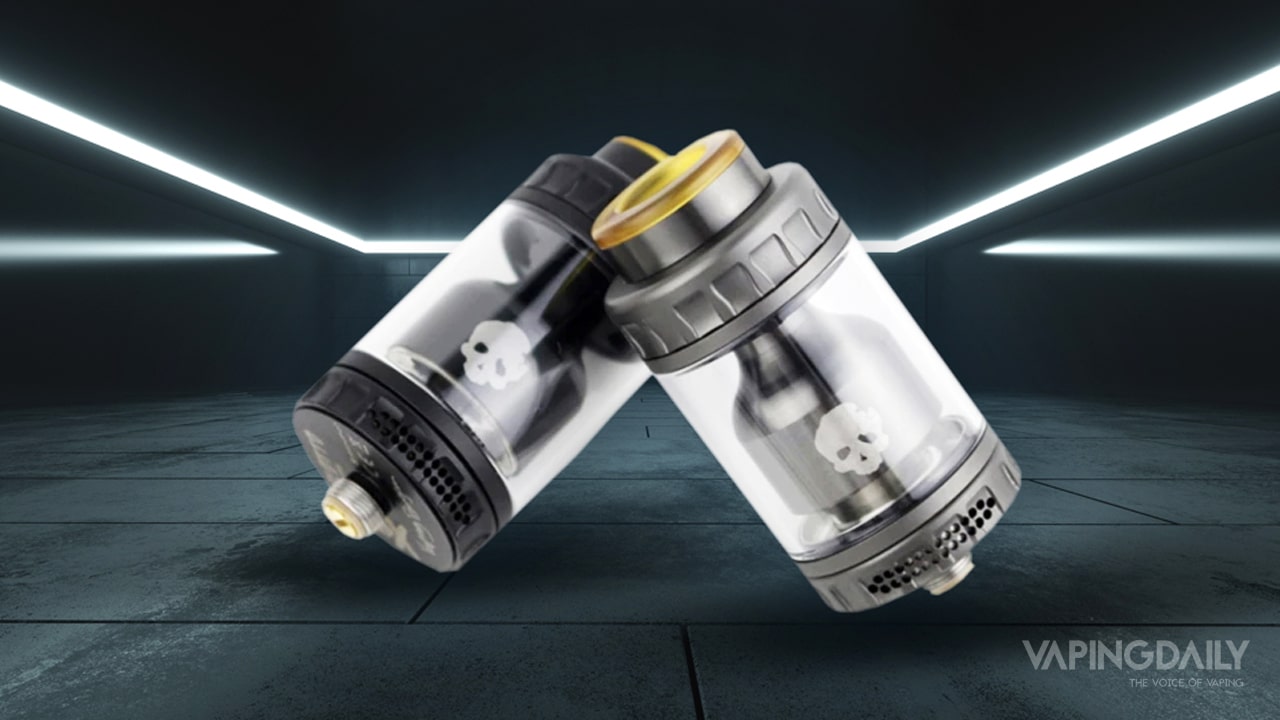 There is also a 6ml all-glass bubble piece that vapers can install instead of the straight, 2ml glass section. The tank stands at nearly 55mm (2.1”) and has a diameter of nearly 25mm, which means it can comfortably fit on standard dual-18650 mods without any problems. There is knurling on the top and bottom edges, which makes unscrewing the individual pieces easier.

This is especially true of the top cap, which only takes a quarter turn to remove, which exposes the large fill ports underneath. The fill ports measure 10mm by 4mm so they are quite ample, and do not present any filling problems. The build deck has some interesting features as well. The deck is encased in a conical, domed housing that has an exceptional metallic finish.

The drip tip also complements the overall esthetic scheme with its frosted look. It matches perfectly with the other design elements, including the machined inner chamber and the stainless steel top and bottom. The chamber has the Vaping Bogan logo etched onto it and comes in several colors along with the entire tank itself, which comes in seven different colors.

The build deck features two posts on either side with a curved ramp in between them. The center of the deck features an arrangement of airflow holes that direct air from the bottom airflow intake holes. There are several air holes along the bottom of the coil base, which is fully adjustable. The air holes have a honeycomb design and they number 26 holes on either side of the coil base.

The Blotto RTA comes in a stylish package that mimics the overall style and image of the Vaping Bogan. It comes brandished with his logo, along with the product name and the Dovpo logo. There is also a special accessory inside the kit that is a classic Bogan accessory. The box also features a collapsible plastic cover that takes a simple pinch of the opposite sides to remove. 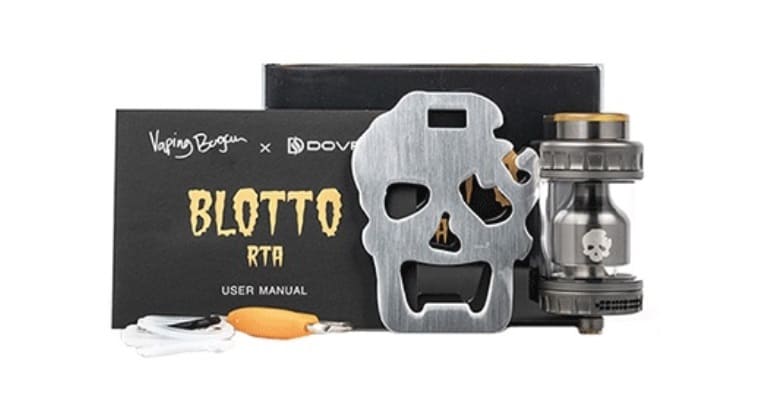 Inside the box comes the following:

The added 6ml capacity also adds to the tank’s height, which tops out at close to 55mm, including the drip tip. The drip tip is an 810 and it is removable so users can install their preferred 810-mouthpiece. The honeycomb design of the airflow is not unique as some Hellvape RDAs use the same design, but its execution in the tank is unique.

The build deck inside pulls in air from many different sides and angles, so no matter the coil type or build, air will be hitting it from all sides. This is what distinguishes the Blotto from other RTAs in its class.

There is also the build deck, which also stands out in a lot of ways. There are two posts on either side, but the main platform is raised, which allows some juice to sit underneath the coil section. The floating platform also makes it easier for users to wick their coils once they are installed into the posts.

The Blotto RTA build deck was designed by experts, but users do not need to be expert vapers to use the atomizer. It has ample room to accommodate single (easier) or dual coil builds (more difficult) on its large terminal deck. Users can only use one-half of the terminal holes, instead of stretching their single-coil across the entire deck, which would lead to users attaching the leads to two positive holes rather than a positive and negative.

The Phillips-head screws are top-down so they are not difficult to clamp down when installing your coils. The terminal leads are angled so they screw in at a slight incline. They are not exactly top-down, which actually can be a little more awkward to screw in place unless you have nimble hands. A single-coil may be too small to efficiently use the airflow system, but new users can mount a thick gauge wire onto the deck if they want to start with a single coil.

No matter the coil type or configuration you have installed, the Blotto RTA is versatile enough to handle anything users want to mount. The airflow system is truly one-of-a-kind and it helps deliver a heightened flavor profile to any juice – even a high-VG e-juice – that rivals the flavor from drippers.

The floating deck also helps prevent leaking, as it captures excess juice underneath the platform so it doesn’t flow out of the bottom airflow holes. Users should not extend the tips of their cotton to far down into the small juice well, as they could obstruct the juice holes and prevent the wicks from juicing.

The little Bogan bottle opener in the kit also acts as a coil measuring tool so users can accurately measure the length of their coils so they match up with the space on the deck. The 242° airflow design perfectly channels air to the coils and can be adjusted to fit any users’ preferences.

The GeekVape Zeus X is an RTA with a 25mm diameter and a postless, floating build deck. The deck itself features four lead terminals so users can install single or dual-coil builds. The Zeus X has an e-juice capacity of 4ml and it uses a silica-glass tank section that is reinforced and heat-resistant.

The rest of the build elements on the Zeus X include stainless steel top cap and base, ULTEM and Delrin drip tips (both 810s), and a PEEK insulator to prevent heat transfer. The Zeus X uses dual top airflow slots that are fully adjustable.

The Vandy Vape Kylin V2 is an upgrade to the original Kylin tank atomizer. The new version also features a stout form factor along with a low-profile exterior. The tank can hold either 3ml or 5ml with the included extender glass in the kit.

The Kylin V2 uses a postless build deck, also with four lead terminals so users can install single or dual coils. It features a bottom airflow system that is fully adjustable, while there are several air inlet holes outside and within the deck.

The Vaping Bogan aka Sam Parsons has built a large following over the years with his profanity-laced but thorough, and spot-on reviews. It only makes sense that he be the next reviewer/vape designer to take his years of experience and funnel it into a well-designed RTA like the Blotto.

The Blotto is one of the most innovative RTAs in recent memory. It has a simple design that belies a more complex airflow system that produces high-quality flavor. The versatility of the atomizer is also a standout amongst the rest of the crowded RTA market. The three different tank sections are much more than any other tank would include, and the 810 drip tip is removable. The build deck is ample, but it probably could not fit more than a two coil build on its 20mm build deck.

The one drawback to the otherwise flawless design of the Blotto is the delicate connection between the glass section and the top cap. When removing the coil base – if the tank is still filled with juice – could easily tip over and spill the juice. Be careful not to tip over the glass or to secure it in place so that it does not tip over.