The Asvape Michael is a truly unique box mod – there is nothing quite like it that you can find on the market today. The device has a nice ergonomic chassis and also packs in a lot of power (200W) under the hood.

With the Asvape Michael’s fantastic design, it will surely get so much attention from people. It has a rubberized and textured artwork finish – ensuring a comfortable and excellent grip. Its firmware is upgradeable and features TCR adjustment and adjustable wattage curve. While the device is a little bit on the big side compared to other dual1860 mods, it is fairly light. 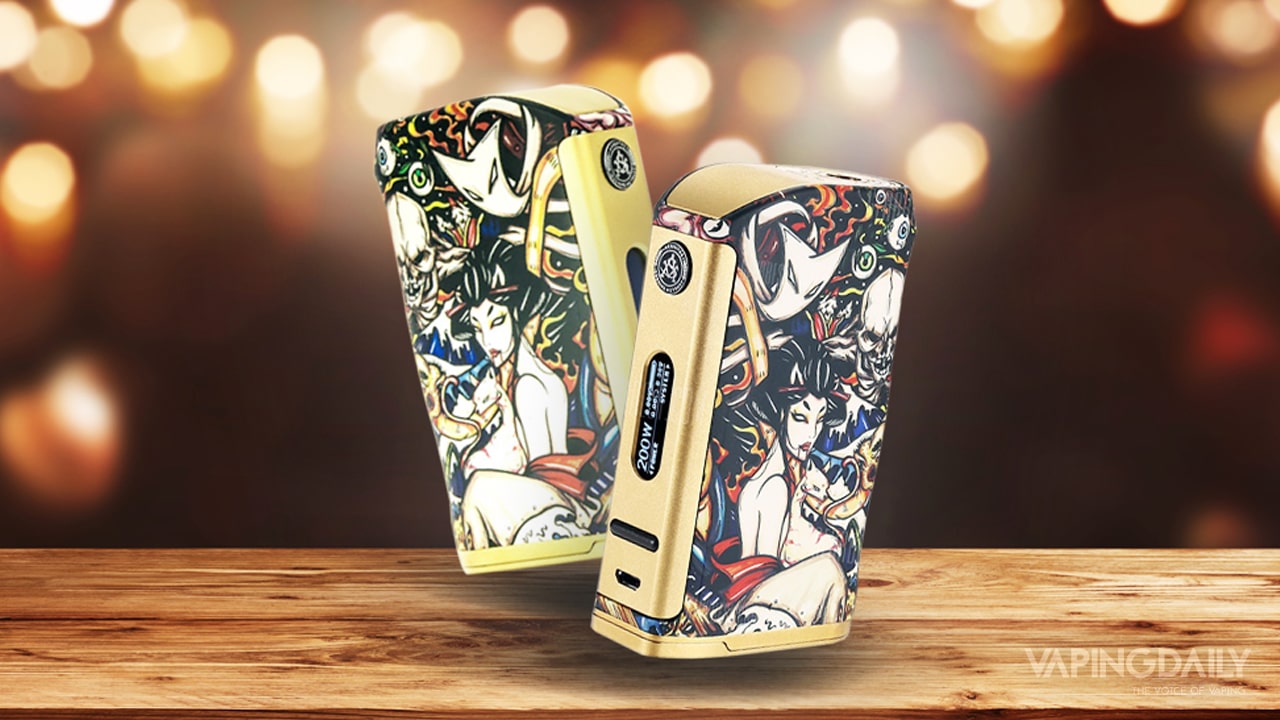 In terms of appearance, the Asvape Michael is eye-catching (while it may not appeal to everyone). The artwork covers both sides of the Michael and features geishas, snowy mountaintops, skeletons, and creepy eyes that all blend together to create an eclectic effect. The device is smooth to hold as its coating seems to be perfectly smoothed out.

The 510 connection can be found at the top, which makes the mod compatible with almost any tank. The device has an LED display, three buttons, and a battery door at the bottom. Simple yet extensive, the menu system of the Asvape Michael takes a little bit of getting used to, but once you’ve figured it all out, it Is a piece of cake to use and is absolutely lovely to use. You will then find its user interface to be straightforward enough. The device has plenty of features to play with. 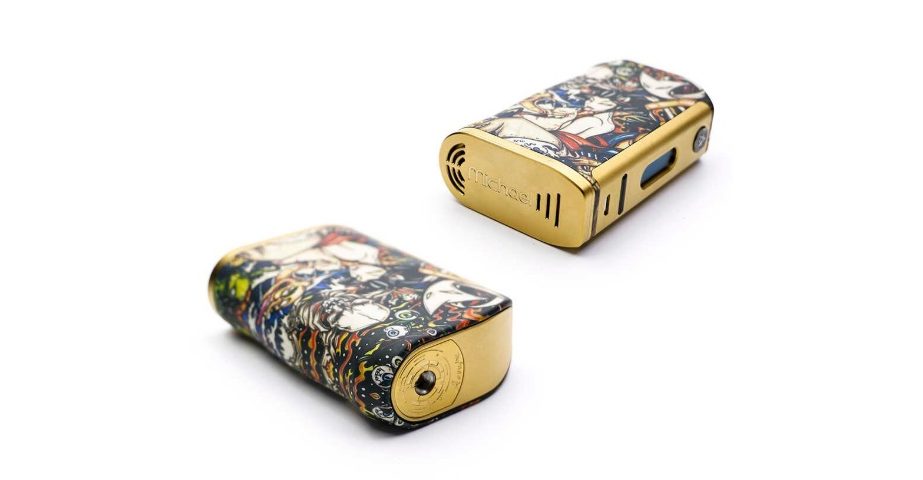 The Asvape Michael performs well and is capable of firing up to 200 watts. With the Michael’s offerings, most modern vapers will be more than satisfied. Thanks to the VO200 chip, it supports a full slate of temperature control options for all wire types, variable wattage, adjustable wattage curves, and manual TCR adjustment.

The variable wattage mode on the Asvape Michael is fantastic and the temperature control mode is very good and accurate. One will surely have no problem with it at all. The device fires instantly too and works as expected. Its buttons work fast too. Wattage adjustments can be made really quick using the + and – buttons, which is a great feature. It also lasts for a really long time compared to other dual 18650 mods.

Another plus is that it boasts balanced charging, meaning that one can charge the batteries in the mod itself, and it even shows the charge level of each battery. However, it does not support pass-through vaping.

What comes in the Kit 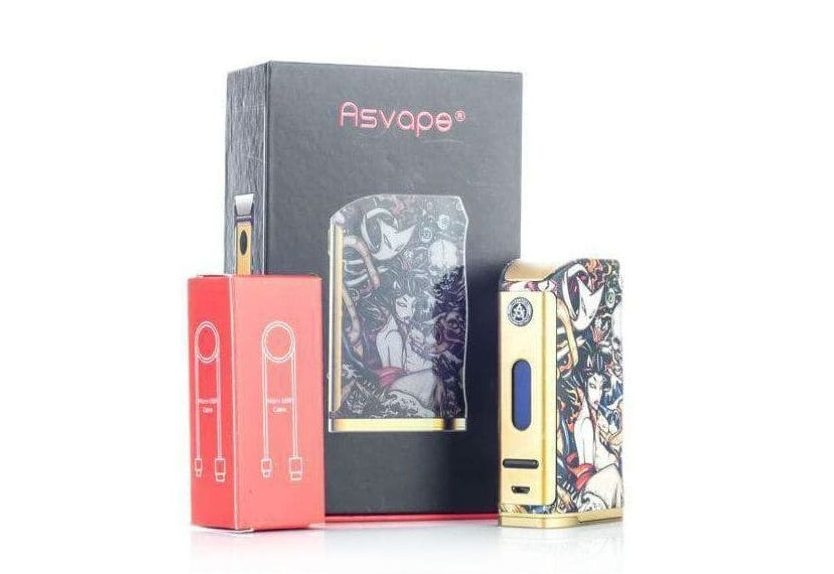 The Asvape Michael comes in a nicely designed rectangular gift box with a glossy picture of the Asvape logo and the device at the front and a list of the contents and the company information at the back. Inside it, one will find an instruction manual, a warning card, a micro-USB cable that is to be used for charging and updates, and the Asvape Michael mod itself.

The Asvape Michael’s construction is phenomenal, having implemented a high-quality zinc alloy construction within an ergonomic contour curve that makes it sit comfortably in one’s hand while also giving a luxurious experience. 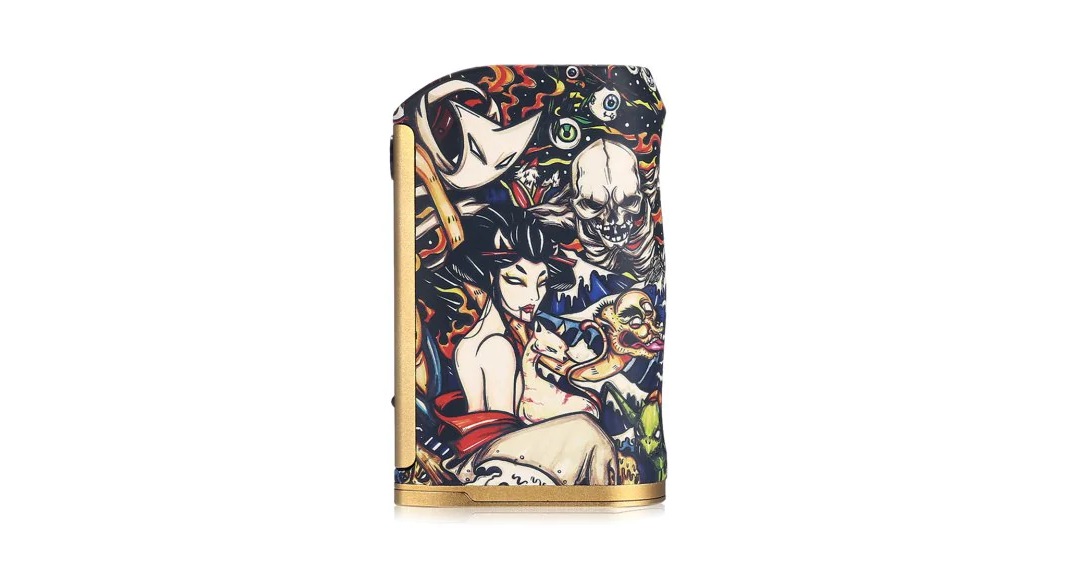 Who designed the Asvape Michael

The Asvape Michael was designed in a joint collaboration between Asvape and VO Tech – creating a mod with a stunning graphic design that is equipped with an advanced American VO200 chipset. The artwork definitely stands out and is a talking point. The finish is designed to be rubberized for a good feel in the hand.

Devil’s Night is an old story that originated in China and India and then transferred to Japan. In the Asvape Michael’s Devil’s Night edition, one can see the eye-catching picture of it that is inspired by traditional Japanese paintings. Its chassis is engulfed in a beautifully striking graphic printed using a water transfer process together with a complementary satin gold accenting plates, making for a timeless finish.

The Asvape Michael is powered by VO Tech’s 200W chipset that has an output power of 5 to 200 watts, a wattage output voltage with a minimum of 3.7 volts and a maximum 9.5 volts, and a standby current of less than 100uA. The VO200 has multiple protection features such as low voltage, auto shut-off, overheat protection, short circuit protection, atomizer error, low resistance protection, and dry burn protection.

The Asvape Michael is a dual 18650 battery powered mod. The device has a sliding magnetic battery access door located at the bottom. 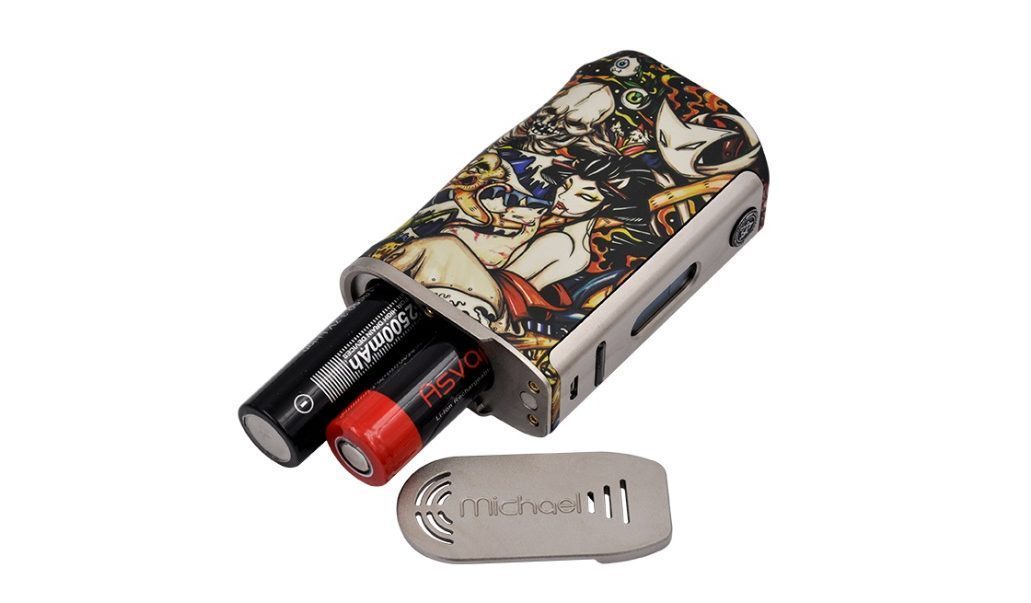 There is a battery indicator and the battery is estimated to last about 8 to 9 hours of vaping. The batteries are drained to about 3.1 volts before power is cut and the low battery warning is displayed.

The variable wattage mode is fantastic as there are 5 memory banks wherein the user can tune it to their desired wattage for them to get the perfect rip. It never feels underpowered and there is no delay on the fire button – one press instantly activates the batteries. 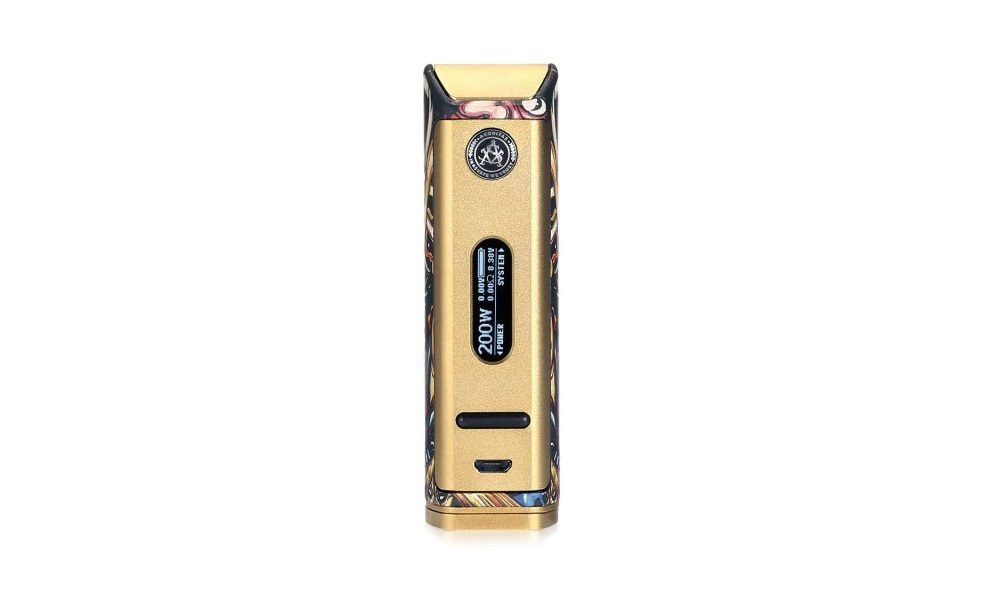 The button is nice and clicky. The power ramp up is remarkable as well. The mod also has the ability to detect if there is no e-liquid and displays a “no e-liquid” warning. All in all, the performance of the Asvape Michael is wonderful and the VO200 chip it comes equipped with is steady, convenient, and does a great job at making adjustments in the menu.

The variable power control mode is perfect for those who want a longer draw but also a slow ramp up to avoid the vape getting hot like in straight wattage mode. In this mode, one can choose one of the five memory settings. One can then use the “edit” submenu in order to adjust the wattage in 1 second intervals.

How to Update the Asvape Michael Mod

The Asvape Michael is firmware upgradeable and this could be done through the device’s micro-USB port which is also used for charging the device. Since it supports firmware updates, any issue that may arise could be addressed in the future. To update the Asvape Michael, one should download the VO editor, install the editor, and then restart the computer.

After this process, the VO editor must be run as administrator. At this point, the device must be switched off with the batteries loaded. One can then open the editor and then plug the device to the computer with the provided USB cable. The Asvape Michael will give one the option to either charge it or update it, one will have to choose update within 10 seconds as when the 10 seconds have passed, it will automatically choose to charge the device.

The editor will then display the current firmware. Just click the update button that can be found on the left side and a progress bar should appear.

The VooPoo Drag is also a dual 18650 powered mod. The device is made from zinc alloy with a carbon fiber accent panel on one side and a laser-etched “DRAG” on the other that doubles as a large battery access door that is firmly held in place by 2 strong magnets. 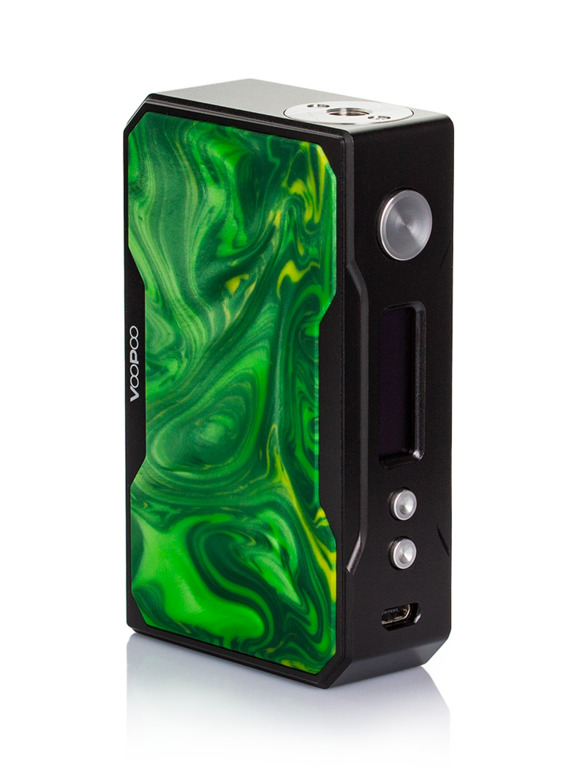 The Drag is slightly smaller than the Michael, measuring 90 by 54 by 24mm. Equipped with the Gene chip, it has a 0.025 second firing speed. The 2 18650 batteries that the device is powered with provides it with a maximum output current of 40 amps. It has several battery venting holes at the bottom which are there to provide adequate battery ventilation for when the device’s internal temperature increases.

The Drag features 2 adjustment buttons that are located right next to its bright OLED display and an enlarged firing button. The device has a temperature control mode as well as a variable wattage mode.

Another dual 18650 powered mod is the Tesla Punk 220W TC Box Mod from Teslacigs. The Punk is a fusion of futuristic RGB LED light-up functionality and steampunk designs. The device delivers a nice and unique design with its two transparent panels that showcase some of its inner gears and cogs. The Punk is made from a durable zinc alloy frame. 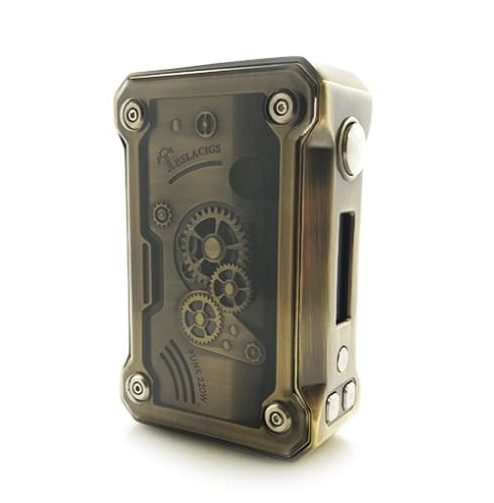 Its RGB LED lights work in conjunction with the onboard intelligent chip for a modern vaping experience. It fires up to 220 watts and supports temperature control modes for Titanium, Nickel, and Stainless Steel 316.

The device also supports Temperature Coefficient of Resistance (TCR) mode for full customization from 200 to 600 degrees Fahrenheit and even features a Taste mode that could be set to Norm, Soft, Hard, and User mode if the user wants to be in complete control of how their e-liquid tastes.

It also is firmware upgradeable and has a 510 threaded connection together with a slide-out battery door cover.

While it’s a bit on the pricey side, once manufacturing quality and the chip itself are considered, the price is justifiable. The Asvape Michael has got a stunning design, an easy to use menu, and a nice feeling in the hand.

The device has pretty much every feature that most vapers could want or need: temperature control, bypass mode, adjustable power curves, and a really fast and accurate chip. The Michael does what it says it does, together with a lot of features to play with. All in all, the Asvape Michael is powerful and perfectly executed. 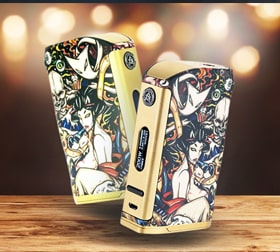