One of the most frequently asked questions is, “What is better vaping vs. smoking?” Electronic cigarettes are considered to be safer than regular cigarettes, as they are positioned by manufacturers.

But nonetheless, you have heard the buzz about the e-cigarettes and are excited about quitting cigarettes and giving vaping a try, right? However, before you jump straight in and join the vaping team, it is vital that you thoroughly examine the facts. 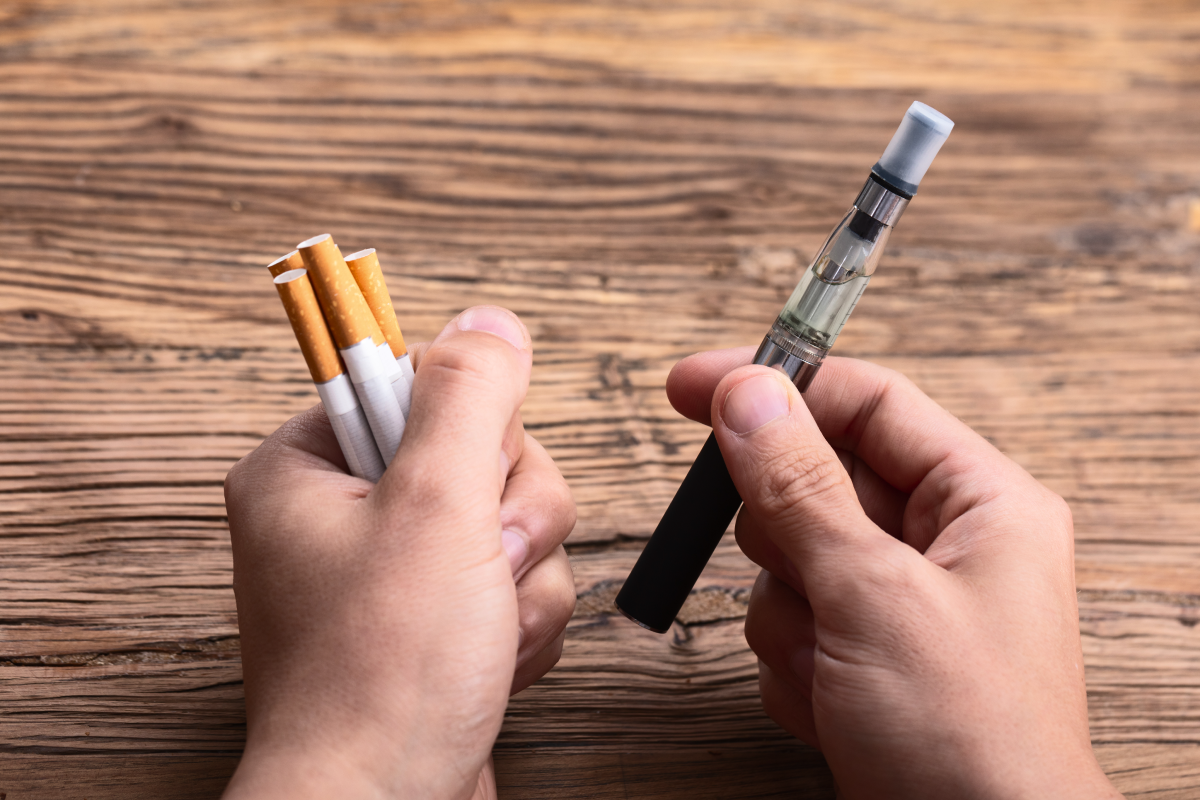 Is It Better to Vape or Smoke?

Vaping is still pretty new to the market, only having been around for about a decade or so. Since it hasn’t been part of the public as much as cigarette smoking, there’s a lot that people don’t know about it. Here, several aspects regarding the two habits of vaping vs. smoking will be discussed to help you understand how they are similar or different.

This is one of the most significant questions throughout the vaping and smoking community. Previously, left unanswered due to the lack of research and statistics on the topic. Much has changed in recent years, with many well-known researchers releasing papers on the subject to shed some light on the theories of others.

Unfortunately, since vaping is still relatively new and studies are ongoing, vaping is sometimes put in the same category as smoking. Hopefully, with time and when more studies are completed, vapers will enjoy more freedom than their smoking counterparts.

There are many aspects to be taken into consideration when making the comparison between vaping vs. smoking. 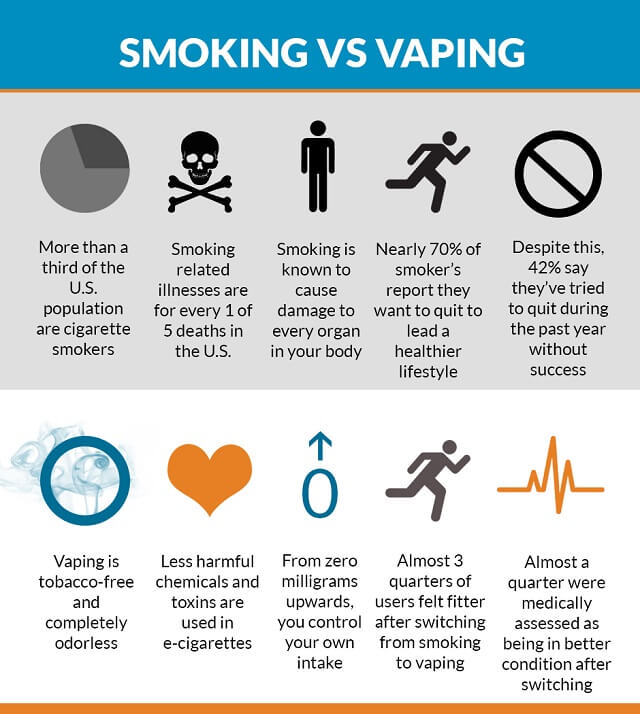 Which Is Better for Lungs Vaping or Smoking?

Whether you’re taking combusted smoke into your lungs or vapor, there are going to be some quite serious health implications that come along with it.

What Chemical Do You Get From Smoking?

The smoking process includes the combustion of tobacco that contains thousands of chemicals, 20+ of which have a strong connection to causing cancer. We can always reference each of the 20+ chemicals by a single name, “carcinogens.”

Because trying to list out 20+ chemical names takes to long. However, here are just a few of the chemicals that we can consider carcinogens:

As mentioned above, many of the chemicals have a strong connection to some leading health conditions, including; cancer, heart disease, and lung disease. You will not find these chemical elements during the process of creating a cigarette.

The combustion of the tobacco leaf starts the process of chemical reactions, which creates smoke full of the previously mentioned carcinogens. (Cancer.org, 2017)

What Chemicals Are in Vape?

The primary process of vaping removes the need to combust anything, removing a handful of the harmless chemicals listed above. Studies on the vapor produced from vaping suggest there is a significant difference between the number of carcinogens found compared to cigarette smoke. With over 20+ chemicals found in cigarette smoke compared to only a few in the vapor. Here are just a few of the chemicals found in vapor:

Any other chemicals found are mostly related to the process of flavoring. Many of which are found to be food grade and typically safe to consume. This sends us on a path to ask the biggest question in an area in which research is not yet available. Overall, these flavorings are designed to be ingested and not vaporized. That leads us to a gray area so far.

The long-term effects are just not known. The University of California San Francisco’s Center for Tobacco Control Research and Education has identified nine chemicals in the vapor from e-cigarettes that are on California’s list of carcinogens and reproductive toxins. Not all of these chemicals are found in all vape juice.

It should also be noted that this warning is meant to bring awareness to some of the potential dangers and not to actively discourage users from vaping. Simply put, it shows that there are still studies needed to determine exactly how safe vaping is compared to cigarettes.

Vapor from e-cigarettes is much different than smoke from a cigarette. The “vape smoke” that comes out of a vape is not a vapor, but in fact, an aerosol. An aerosol consists of liquid particles suspended in the air or in gas that fall to the ground. Most people call these suspended particles “vapor” instead of an aerosol, even though this is not technically correct. Vapor is something in gas at a lower temperature than usual and can be converted into a liquid by increasing its temperature.

There is no way to say which is healthier because the long-term effects of e-cigarettes are not yet known. However, the British National Health Service published a statement that claimed e-cigarettes could improve health by helping people quit smoking regular cigarettes. As for whether e-cigarettes are healthier, more research needs to be done.

WWhat Is the Difference Between Vapor and Smoke?

Is Vaping Safer than Smoking?

Everything so far concerns the broader image of health and safety, not just health conditions. Comparing some of the stories and past experiences with smoking and vaping, which one is the safest habit to have around in your day-to-day life?

How Can Smoking Materials Cause Fires?

A report by John R. Hall, Jr named “The Smoking-Material Fire Problem” (Hall, 2017), outlined some incredibly surprising statistics on this subject. “In 2011, U.S. fire departments responded to an estimated 90,000 smoking-material fires in the U.S.” It’s estimated that a total of 540 people died as a result of these incidents, with 1,640 injuries and a total of $621 million in direct property damage.

Between 1980 and 2011, there has been a decrease of around 73% in the amount of smoking-material fires. This is thought to have resulted from standards and regulations put in place for the fire-proof standards of mattresses and furniture. Also, more recently cigarettes have adopted more “fire-safe” requirements, ensuring the risk is much less. As mentioned above, “fire-safe” requirements were put into place for cigarettes in 2003, seeing a 30% decrease in smoking-material fires in the US throughout 2003-2011.

Determined by ASTM Standard E2187-04, the strength of the ignition or ember in cigarettes had to be reduced, ensuring dropped cigarettes would not combust anything else. Alongside this, in 2007 the smoke-free legislation was introduced in England banning smoking in most enclosed work and public places.

Compared to smoking, the studies suggest that vaping has a significantly lower level of health and safety risks. However, it has still seen its problems. E-Cigarettes have had problems with their batteries exploding, which as you can expect causes extreme health and safety concerns:

The release of E-Cigarettes in 2007 saw a huge issue with the batteries exploding. Although unclear on what the main cause of this issue was, research papers and reports suggest that over-charging the device and sub-par batteries played a big part in the explosion. The website ecigone.com has created a comprehensive list, compiling all known explosions throughout the history of vaping. The list provides some extremely useful data analysis on exploding e-cigs. (Staff, 2017).

Since the launch in 2007, they found a total of 243 reported e-cigarette explosions:

It is thought that most explosions occurring before 2015 involved no injuries. However, due to the dramatic increase in battery size in recent years, it is assumed that injuries from explosions will be far greater than ever before. All in all, there have been significant advances in the health and safety control of batteries and devices ensuring you are far less likely to come across an issue when used, stored, and traveling under the correct conditions.

Always make sure to follow some safety standards when using batteries. Almost all of the vaping-related injuries reported are due to a malfunctioning batter which could have been avoided if these battery safety tips had been followed.

Is It Cheaper to Vape or Smoke Cigarettes?

The cost of vaping vs smoking is one of the main factors for anyone using vaporizers or cigarettes. With vaping having a much larger initial cost to purchase the hardware, it is often seen as the more “expensive” option out of the two. In the bigger picture, this is far from the truth. There are plenty of papers and statistics available to find out the cost of smoking. However, this will heavily depend on the amount you smoke per day. Research by Tobacco Control (Control, 2017) found that throughout a single day, the average cigarette intake is around 5:

From the calculations above, you can see that vaping is much cheaper. You have a lot more control over the juice you’re using with your vaporizer, having the ability to have 1 or 2 puffs whenever you need it. However, with vaporizers being a lot more accessible, it’s been found that smokers transitioning to vaping will vape a lot more than they smoked.

Is Vaping Better or Worse Than Cigarettes?

There’s an ongoing debate on whether vaping is safe or not.

According to a report sponsored by UK’s Department of Health and published by Public Health England – a prestigious group of highly qualified scientists, researchers, and public health professionals – electronic cigarettes are at least 95 percent safer than tobacco cigarettes. The report also recognizes their potential as a viable approach to quitting smoking.

In the US, however, electronic cigarettes are looked upon nearly as evil a product as tobacco cigarettes. Quite interestingly, the American Heart Association (AHA) took a rather cautious stance contrary to popular belief in the country. In the 20-page statement published in 2014, the AHA suggested that e-cigs are less hazardous than tobacco cigarettes, and vaping can help smokers quit. Here’s a small section copied from the report:

“E-cigarettes either do not contain or have lower levels of several tobacco-derived harmful and potentially harmful constituents compared with cigarettes and smokeless tobacco… [e-cigarettes] present an opportunity for harm reduction if smokers use them as substitutes for cigarettes.”

How Many Puffs of a Vape Are Equal to a Cigarette?

Each drop of e-liquid lasts about 7 puffs, so 2 drops are approximately equal to 1 cigarette (14 puffs). There are about 20 drops per ml of e-liquid. The strength of nicotine in cigarettes is the amount actually absorbed by the body.

Legal issues are where the debate over vaping vs. smoking heats up. Cigarette smoking has been increasingly prohibited in public spaces, first in airlines, then in government buildings, and now almost universally indoors or too close to buildings.

Some countries have looser restrictions than others, but mostly you’ll have to smoke in a designated area while in public places or just wait until you get home. Check the laws in the appropriate state or jurisdiction to make sure that the local laws are followed when it comes to vaping.

When comparing the benefits of vaping vs smoking, there are many different aspects to take into consideration. However, in the bigger picture, the only thing throwing a little bit of shade on vaping is the long-term effects, something that only time can unveil. 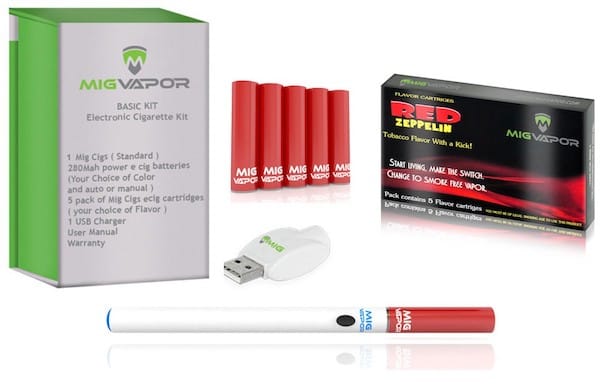 281 comments on “Vaping vs. Smoking: What Are the Benefits of Vaping vs Cigarette Smoking?”