Most people know that smoking is really bad for your health. It affects nearly every organ in your body and increases your risk of developing various diseases, the risks of which go up the longer you smoke. But the one part of your body that is arguably the most affected by smoking is your lungs. Let’s take a closer look at what exactly a smoking habit does to your lungs. 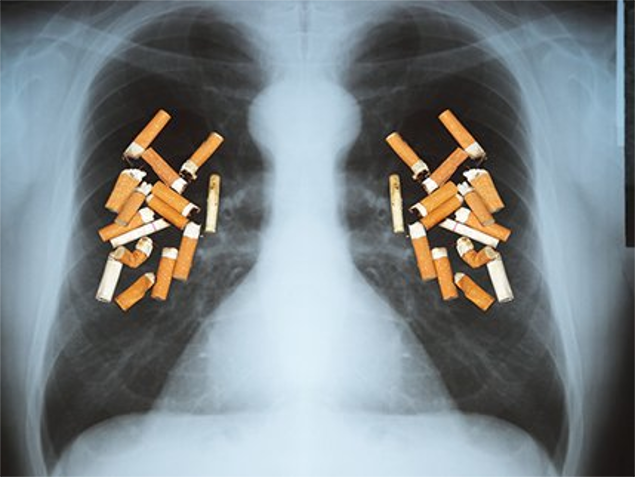 Because they’re continually pumped up with oxygen, normal and healthy lungs are plump and pink. They may not be pretty to look at, but they’re clean and pure. However, you can instantly recognize a smoker’s lungs on sight. Smokers’ lungs are black. The black color is because every time you inhale a cigarette, it deposits tar in your lungs. Over time and after smoking lots of cigarettes every day, enough tar deposits build up inside the bronchioles until it is distributed throughout the entire lungs. On top of that, you may have separate dark spots from smoking related pollution, too.

Although it’s not as visible to the naked eye, there are a lot of tiny changes inside your lungs, too. Your lungs have little hair-like structures called cilia, which act like gentle brushes to move particles through your lungs and help you to breathe better. But smoking ultimately damages off those cilia, so you don’t get the same benefits they offered. The cilia rest overnight when you don’t smoke, but eventually that damage can become permanent.

You’re probably familiar with the sound of an older person who has smoked for many years because they have a distinctive hacking cough, often called the “smoker’s cough.”  The smoker’s cough doesn’t just sound unpleasant – it’s also very uncomfortable for the one doing the coughing. The chemicals in smoke, like hydrogen cyanide, irritate the lining of your bronchial passages and cause inflammation that leads to coughing.

Your lungs do work to try to remove the tar you inhale by smoking, by moving it out of the lungs through the bronchiole tubes and up into the trachea. But nicotine paralyzes the cilia, so that causes the coughing because your lungs have to work that much harder. Whatever irritants you can cough up comes out in the form of phlegm.

Imagine never feeling like you can get enough air into your lungs, and how hard that would make it for you to breathe. That’s exactly what happens if you have chronic obstructive pulmonary disease, or COPD, which is a serious illness that’s believed to be caused by cigarette smoking. Other conditions, particularly certain jobs like coal mining or working in an environment with very bad air quality, can also lead to COPD.

Emphysema is sometimes referred to as a separate illness from COPD, but emphysema is actually an early stage of the other disease and refers to changes that are occurring within the lungs. Emphysema and chronic bronchitis are both associated with chronic obstructive pulmonary disease and symptoms feel like extreme shortness of breath, wheezing, being unable to catch your breath and intense coughing.  Ultimately, COPD is really bad news, because it almost always gets gradually worse and results in death.

Lung cancer is the biggest bad news you can get when you’re a smoker. Although some cases of lung cancer can be caused by other factors, like exposure to radon, asbestos and radiation, the vast majority of cases of lung cancer happen to smokers or people who live with smokers. According to the American Lung Association, about 85 to 90 percent of people with lung cancer are current or former smokers.

Although lung cancer can be somewhat treatable when caught in the early stages, it’s often undiscovered until it’s too late because the symptoms are mistaken for allergies or other chronic respiratory symptoms associated with smoking.

Your lungs provide the literal breath of life, and they can do a lot to regenerate themselves when they’re exposed to damage. But a regular smoking habit really takes a major toll on your lungs, and in many cases your lungs just can’t overcome the amount of damage. The good news is that your body has a big capacity to heal, and the sooner you quit smoking, the sooner you reduce the risk of damage to your lungs.

53 comments on “Smoker’s Lungs and How to Save Them”