The Laan Pod Mod from Shanlaan, a Chinese manufacturer, is the latest attempt to refine the pod mod to be even more streamlined and user-friendly. And, in some respects, Shanlaan has achieved that goal. The Laan Pod Mod is so easy to use, I was sure that I was missing something in setting up the device to vape.

“It can’t be this easy?” I thought to myself. Of course, there were the rudimentary steps; the charging, the filling of the cartridges that come with the kit, and that was it. Nothing else. The cartridges are semi-disposable. The battery is built-in.

The Laan Pod Mod doesn’t have any buttons; and yet, it features temperature and wattage control, a child-lock safety feature, and a draw-activated vape, and still, no buttons. Well, dear reader, you may be asking, “how can the Laan have all these features and still have no buttons?”.

And you would be right to ask that question. The answer to your query is the Laan is one of the few pioneering vape kits that you can connect to your smartphone through a downloadable app. This app is what allows you to control the temperature and wattage and keep it from falling into the wrong hands (children). 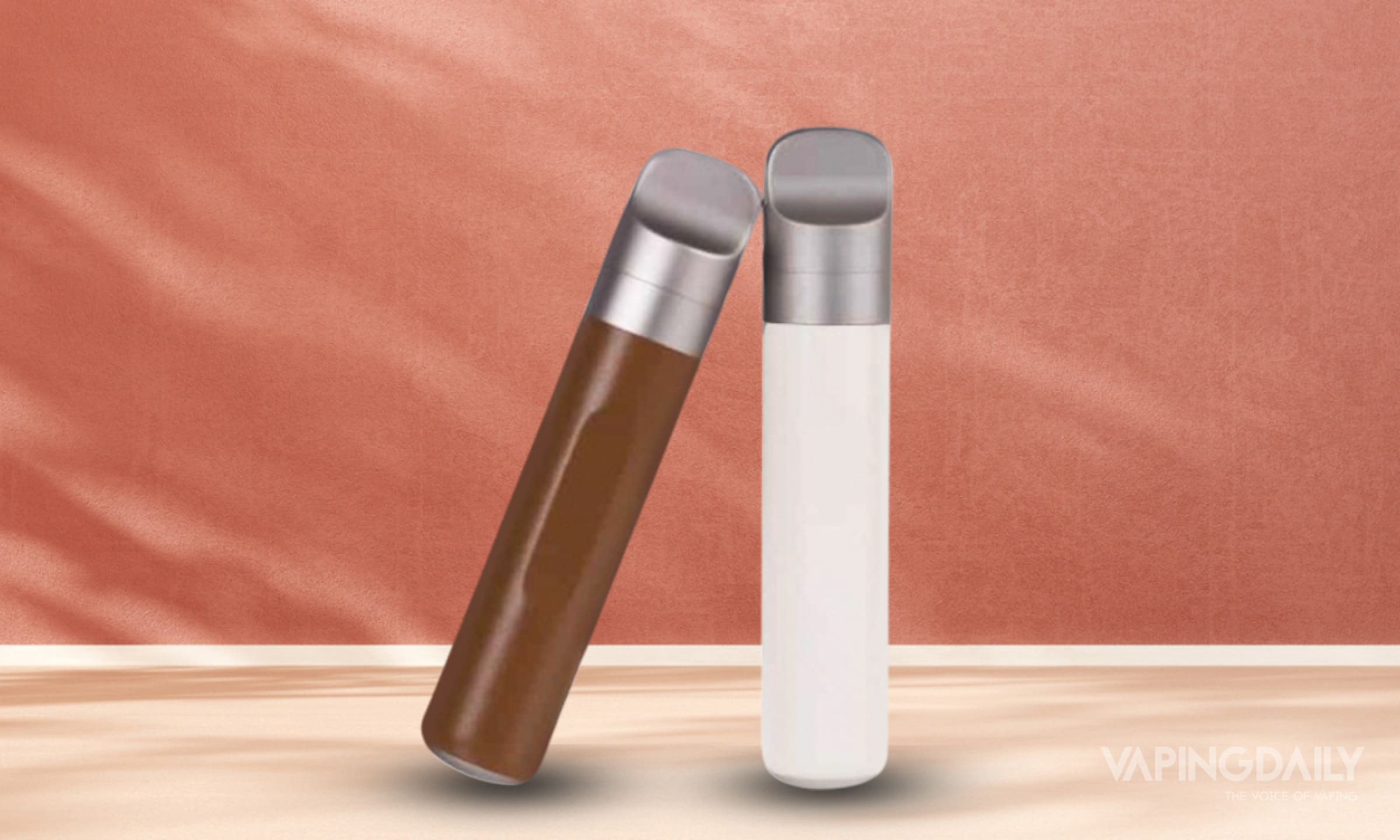 The kit itself was interesting to behold; it was quite futuristic like it came from an Alien movie. The Laan comes in a flattened pod-like box that opens in half to reveal the contents inside, which are:

And using the Laan, as I said above, was stupid easy. I know that’s the point behind most pod mods since they are trying to attract smokers who are looking for a simple introduction to vaping. The Phix and Juul both had ease-of-use as a selling point.

But, those mods had pre-filled cartridges that you just popped into the device. With this mod, you need to fill the cartridges first, which is a plus or minus, depending on how you look at it, but we’ll get to that point later.

Another thing, of course, is the fact that you have to download the app because some of the more important features of the device won’t function without the app. Downloading the app lets you also control the temperature and wattage.

And the designers at Shanlaan took on this challenge, because looking at the Laan you don’t know what it looks like. It’s tubular; it’s relatively light at around 85g, and the body is made of light, an aluminum alloy that feels great in hand.

My model came in a brown leather casing, which, after I saw it, did not like. I checked out the website and thought the all-black or all-white version was much sleeker and sexier, since they truly stood out. Some of the other interesting features of the Laan: 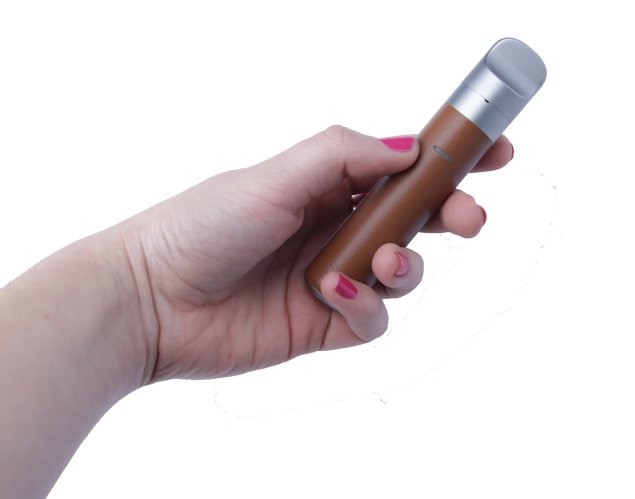 I discovered that “laan” in Chinese refers to fog in the mountains, which, of course, makes Laan a great name for a pod mod. After I charged the device, which took around an hour and a half, I filled the cartridge with a heavy nicotine content e-juice, just because I wanted to get a great mouth-to-lung experience.

I filled up the cartridge with the Legend from the Studio Brand that was a 50/50 PG/VG mix with a nicotine content of 12 mg (yes, I was having that kind of day). After I downloaded the app and turned on the Bluetooth setting on my phone, I connected with the Laan.

The app shows you three important variables: battery life, temperature control, and wattage levels. There’s no real numerical measurement, but the app works like a light dimmer; you adjust until you’re happy with what you have. 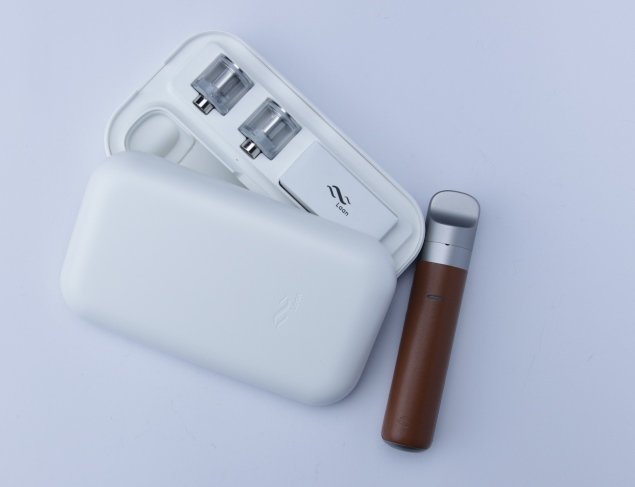 You can also toggle on the child lock, which prevents the little people from getting their hands on the nicotine, since the device shuts off when the phone is not next to it.

When I eventually took a hit from the Laan, I found that the mouth-to-lung potential was real and my mouth filled with an enormous cloud. The flavor was phenomenal. The e-juice I was vaping has strong flavors abound, like caramel and brown sugar and it all came together in a marvelous, contained explosion.

Covering up the airflow valve, which was supposed to allow for an even more restricted, mouth-to-lung hit did just that, but I was more satisfied with the Laan as a direct lung device. The coils are marketed as sub-ohm, and for diehard vaporists (just made that word up and am now clicking “Add to dictionary”) who would say that a pod mod could never be a sub ohm device, I would agree.

Shanlaan may have overreached by trying to appeal to everyone, both the newbies and the veterans. Of course, it’s understandable; you want as many people as possible to buy your product, and so you make your device as appealing as possible.

But the Laan, as hard it tries, doesn’t quite get to the vapor production level that some genuine sub ohm devices achieve.

I was quite taken with the Phix from MLV, but, that was a long time ago. Things change, people change, pod mods change, and so I’m taking this occasion to announce that the Phix is no longer my favorite pod mod. However, I’m not announcing that the Laan has taken its place.

I made a comment earlier about the cartridges of the Laan needing to be filled, which was something I appreciated. As much as I liked the Phix’s ease of use and style, I was harrumphed by the limited choices when it came to e-liquids. The Laan does not have that problem.

Even if you are not a fan of having to fill your own cartridges, the variety that comes with having refillable cartridges is a benefit in and of itself. And when compared to something like the MyJet from Wisemec, another recent pod mod, the Laan takes it, hands down.

The MyVapors MyJet is much harder to operate (buttons). The coils and wicks can be replaced, but it’s a hard process. And it only has a 350 mAh battery compared to the 1300mAh behemoth of the Laan and weighs about the same. So the win goes to the Laan.

Of course, some real, hardcore mechanical mods don’t have buttons either, but those take a long time to built and done by people who usually know their stuff. The button-free interface can be a bit surprising, even though a lot of pod mods don’t have buttons. It’s only, with the Laan no-buttons takes on another meaning because of the Bluetooth connection.

Like I said above, the MyVapor MyJet weighs about the same as the Laan, but the latter features a powerful, long-lasting battery. So you will surely get a full day of use out of a full charge and especially great flavor and cloud production.

I don’t know what made the difference, but the look of the all-black and all-white models were incredibly eye-catching. I wasn’t happy with the brown model (maybe a darker shade of brown) color-wise. The Laan, however, takes the prize for a mod that attempts something new in terms of design aesthetic.

Despite the low resistance coils, I wasn’t entirely convinced the Laan was a sub ohm device. Perhaps, one day there will be a pod mod with real sub ohm capability, but the Laan is not that mod.

The Laan is certainly something I have never seen before. A lot of new vape kits are going to be coming out with Bluetooth connections (some already have) and with the possibilities of a Bluetooth connection and a downloadable app, you can expect a lot more features available for the device, outside of the device itself.

The Laan is the brave, first step towards not only a different pod mod system but a new kind of vaping experience that is both hi-tech and easy to use and looks great.