The VooPoo Alpha Zip is the latest entry in the Alpha-series of mods that started with the Alpha One. The Alpha Zip comes in two designs. Vapers can choose from either a dual-18650 Zip or a Zip with an internal 4400mAh battery, which is smaller than the dual-18650 version.

An Up-Close Look at the VooPoo Alpha Zip

The dual-18650 Alpha Zip is a gleaming, well-made mod that uses a magnetized, removable panel for its battery door. The Alpha Zip is a little smaller than the original Alpha One, but it does share the same straight-edged form factor, save for a few angled edges. One side of the mod acts as the battery bay door, which is connected to the mod via two strong magnets at both ends of the door.

There are a few colorful, well-designed options for the device that stand out from the original Alpha’s monochrome, one-color exterior. There are five different color options, each with their unique esthetic. The side control panel of the Alpha Zip 180w TC also adds something new to the classic design. The buttons are all-metal — the entire mod is made from zinc alloy — and they stay well within the mod’s structure without protruding out too much. 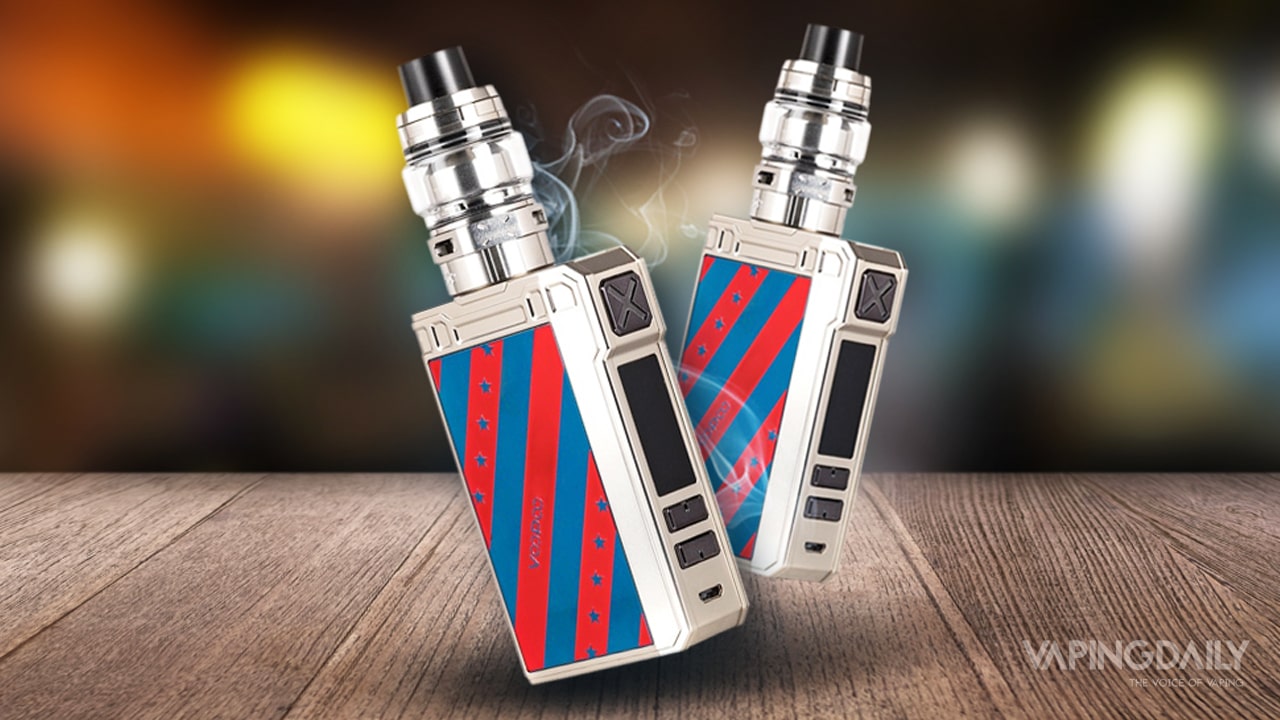 The OLED along the side of the panel is also a throwback to the original’s similarly-sized screen. The Alpha Zip 180w TC also uses a three-button control configuration, using the firing button and the two adjustment buttons under the OLED. There is also a USB port on the control panel for users to install firmware updates.

There is a spring-loaded, gold-plated 510-connection on the top of the mod that is not quite centered but allows for the installation of tanks as large as 25mm, such as the MAAT tank, which measures 24.5mm (0.96”). There is a row of battery vents along the base of the device that helps keep the dual 18650s cool.

What’s Inside the Box

There are two versions of the Alpha Zip mod, as mentioned above. This review is of the dual-18650 mod, which also comes with the MAAT tank, as does the internal battery version.

The dual-18650 version also comes with the requisite coils that are new to the VooPoo family of coils. Here’s what to expect in the VooPoo Alpha Zip kit:

The design and build quality of the Alpha Zip 180w is apparent from the get-go. It has a gleaming finish, at least the metal parts, with the decorative, battery plates bearing colorful, sophisticated designs. The button designs are also eye-catching. There are grooves etched into the individual buttons that give them a good tactile feel.

Similarly, the magnetic plate on the battery bay stays securely in place when installed and has no play to it. The screen has a good size to it and only displays information relevant to the vape like wattage, resistance, voltage, and battery life. The device measures less than 90mm tall (85mm or 3.3”) and has a width of about 25.5mm (0.98”).

There are three selections demarcated by 1, 2, 3, so users can choose from, in this order:

The three modes do perform their stated functions, but many vapers may find them lacking in power and flavor. Sticking to the main vaping outputs like wattage or temperature control may be the best way to achieve their preferred vaping experience. Users can also press the up and down buttons to access more temperature control features like setting the resistance.

The MAAT tank measures close to 28mm (1.1”) in diameter at its widest point (the airflow control ring), but measures only 24.5mm (0.96”) at the 510-connection so it is a perfect fit for the Alpha Zip mod. On the top of the tank, there is a spring-loaded top cap that releases with the push of a button. The top cap slides out, but it stays firm and does not become loose.

The top cap also features a proprietary 510-drip tip that is removable but not replaceable. Users can fill the tank from the single, top fill port, while they can remove the coils from the bottom of the tank, with the tank’s innovative coil base. The coil base requires only a quarter-turn to come off the central tank so users can take out the coil from under the tank.

How the Alpha Zip Performs

The Alpha Zip mod paired with the MAAT tank makes for a formidable vaping device. The Alpha Zip features the GENE.FIT chip, which is known for its quick firing-speed and accuracy when vaping in temperature control and wattage mode. Users can push the mod to 180W for a vape that is both flavorful and produces large amounts of cloud.

The battery bay door is always secure and it does not shift even when the device is in use. The screen is a bit dark because of the protective tint that covers it, but it is not impossible to see, at least, not in direct sunlight. The buttons are very responsive and the overall build quality of the device feels solid.

The GENE.FIT chip allows for superfast setting changes and users can easily navigate through the menu options, which are all clearly labeled. The MAAT tank boasts impressive flavor as do the two coil options, which are both sub-ohm mesh-style coils that give excellent flavor.

There are two versions of the Alpha, both mentioned in this review. There is the dual-18650 mod, and the other mod has a built-in 4400mAh battery. The Mini version of the Zip has a lot of the same features as the larger, dual-18650 device including the GENE.FIT chip as well as coming with the MAAT tank and coils.

The Alpha Zip Mini also has the same control panel with three-button controls, along with a small OLED. The Zip Mini can power up to 120W, and also features a full temperature control suite.

The VooPoo Drag 2 is the continuation of the successful VooPoo Drag that introduced the GENE.FIT chip to the vaping world. The Drag 2 is a bit smaller than the original but still uses a dual-18650 configuration as its power source.

The mod also comes with the famous resin-inlaid panels of the original and the magnetic battery door that stays securely in place. The Drag 2 can reach a high-power output of 177W and also comes with a full temperature control suite on its board.

The VooPoo Alpha Zip is the continuation of the successful Alpha One mod that was a departure in design and function for the VooPoo brand. The company tried to hedge their bets by releasing two versions of the new Alpha to appeal to both veteran vapers as well as newcomers. The dual-18650 mod stands out for its luxurious color options that are at the opposite extreme from the straight-edge and monochrome Alpha One.

The MAAT tank also performs well. It features an easy-to-use design with the spring-loaded top cap, and the bottom-coil removal function makes it easy to remove and replace coils. There are triple airflow slots on the bottom of the tank, each of which measures 7mm in diameter so they work well to provide vapers with many airflow styles.