The VooPoo Alpha One is a mod that takes its exterior appearance from the 80s. It has big, oversized buttons on its side that act as the control panel. The overall shape and look of the Alpha One resembles early versions of the Sony Walkman.

Its exterior design is not the only thing interesting about this mod. It is a dual-18650 device that can reach a maximum power output of 222W. It also carries the GENE chipset inside, which gives the mode a speedy ramp-up time and several vaping outputs.

Up-Close with the VooPoo Alpha One

The VooPoo Alpha One is both fun and serious-looking. It has a typical boxy frame with straight edges all around it, but its design is also unique and playful. There are tiny design flourishes like the button-styles that give it an one-of-a-kind appearance. The device stands at under 90mm tall (3.5”) and has a width of 24mm (0.94”). 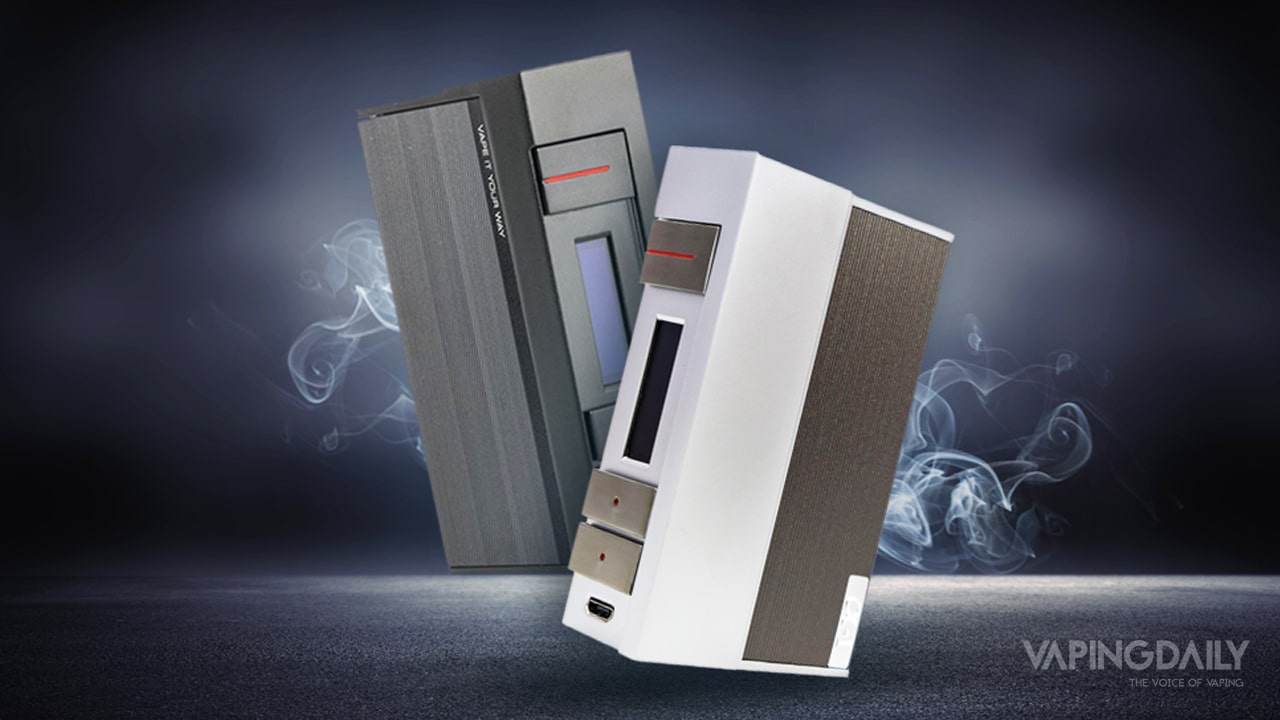 But those measurements do not seem right when holding the device in hand. It feels and looks bigger in real life. The VooPoo Alpha 222W is a dual-18650 device so it is not by any means compact or even very portable. Still, the device has some nice, ergonomic touches like the textured side that has several long lines to give the users a more tactile feel.

The buttons (three in total: the firing button, and the up/down buttons) are large and depress down into the mod like they would on an old-school, portable cassette player. There is also a 0.91” OLED on the side with a USB charging port underneath it. Users can install their two 18650 batteries via the side panel, which is removable and stays in place with a magnetic connection. 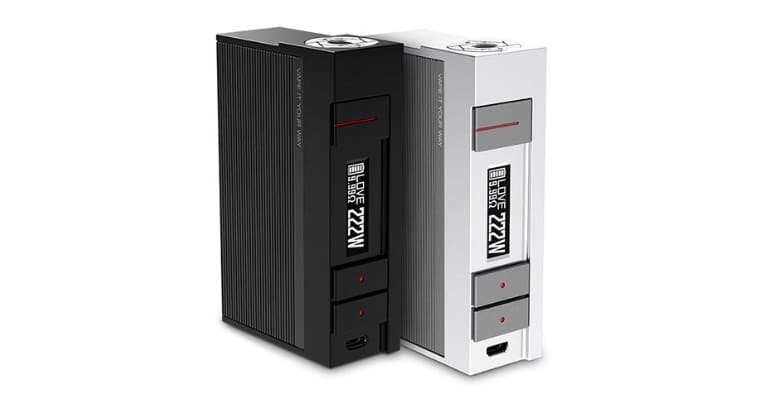 The device features mostly zinc alloy with the side-battery door using heavy-duty aluminum in its construction, which explains the mod’s overall weightiness. There is a raised 510-connection on the side closest to the control panel, which gives users more space to attach larger atomizers. There is minimal branding on the mod and the little that there is done in a tasteful manner, such as the “Vape It Your Way” lettering and a tiny “Alpha” symbol and numeral etched into the other side.

The Alpha One comes as a stand-alone device so there is no tank accompanying it. The device comes packaged in an elegant, easy-to-open box that puts the box mod front and center with the accessories bag and other parts at its side. Here’s what users will receive when they get a VooPoo Alpha One. 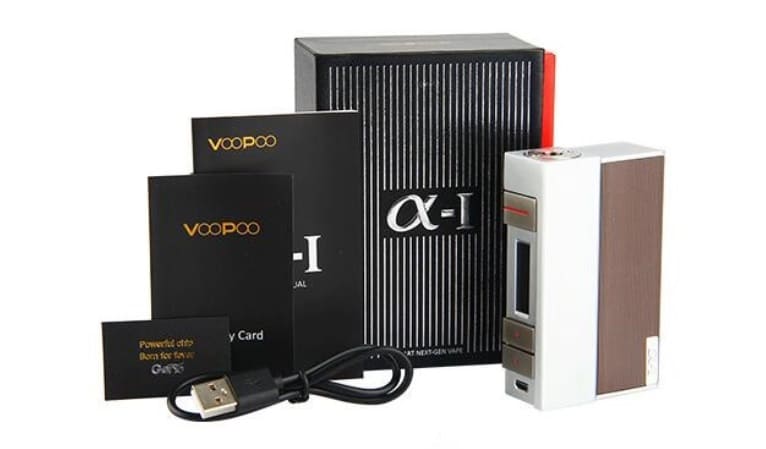 More about the Exterior Design and Construction

Less is more with the VooPoo Alpha 222W. The exterior panels have small details that elevate the mod’s aesthetic in subtle ways. Details like the fine line that cuts through the firing button or the two dots on either up/down button that give the user an intuitive feeling of what the button does. 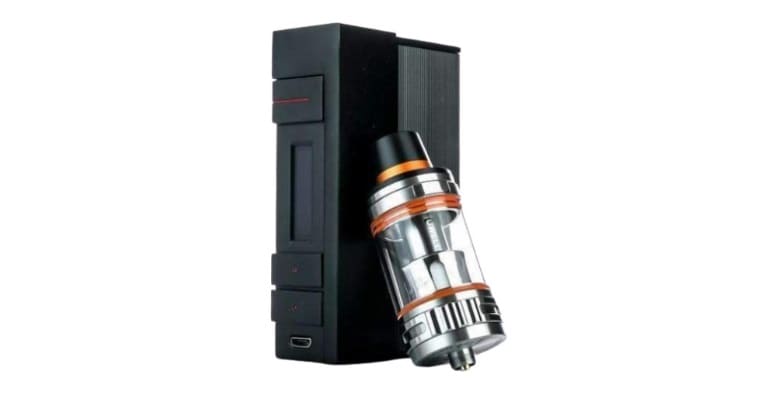 The exterior panels, as mentioned before, have a series of lines cut into them to give the user a unique tactile experience. The lines also improve the grip and make holding the device a pleasant experience. While the hard, straight edges might not seem like the most comfortable box mod to hold, the mod does have easy-to-access controls that give the user-experience a boost.

The feel of it is also unique as most mods have uncomfortable accents that protrude out too far or make the box mod VooPoo unnatural to hold and touch. But, another thing that does bring down the mod’s usability is its weight, as it weighs in at close to 170g or 5.9oz (without the batteries installed) so even by itself it is a hefty device that is not pocket-friendly.

The device takes two 18650 cells. Users need only pull out the back-panel from the mod to access the battery bay. Once the batteries are strapped-in, users can simply replace the battery bay door by letting it snap into place with the magnetic connection.

The two 18650 cells means that a lot depends on what mode and what coil users install into their tanks to determine battery life. The GENE chip has a wattage range of between 5-222W, even though that high-power maximum seems inaccurate given the dual-18650 power source. Even if vapers set the wattage at the maximum, the box mod VooPoo could only conceivably get as high as 200W or a more conservative estimate, 100W.

Still, if vapers set their power setting as below 90W, say, in between 50-70W, they could use the device for a good long while, a few days at least, with light to moderate usage. The GENE chip also comes installed with the LOVE mode that creates a pulse of energy when the device is set for high wattages (anywhere above 160W). Users can turn off the function via the menu, but it is a good addition for high-wattage vapers to preserve battery life as well as the integrity of their coils.

The VooPoo Alpha 222W has a standard, spring-loaded, gold-plated 510 connection up top that also features some design accents that also allow for better air intake. The 510-plate, which is raised above the top the mod can hold anything topping out at 25mm in diameter but not bigger than that. 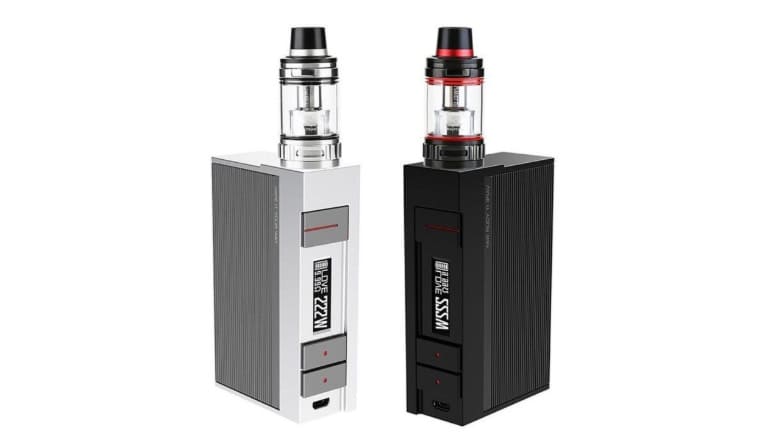 As mentioned, the stated high-power output is not feasible for a dual-18650 device, and users need not push the mod to such a level to get a satisfying vaping experience from the mod. Vaping at 60 or 70W gives users a good range to produce large, flavorful clouds. The GENE chip makes vaping on this device very pleasurable.

The board fires instantly but it constrains the power output so it does not burn out your coils. The LOVE mode also lets users push the power, while acting like a curve mode so the power output drops back when needed or when programmed to do so. The GENE chip also offers users the unregulated use of the battery with the Voltage mode, which can be accessed via the secondary menu system.

Users press the firing button five times to activate the mod, three times to change between modes and press and hold the two adjustment buttons to enter into the Function menu. From the Function menu, users can set or disengage the LOVE mode as well as the Custom Curve mode for both VW or TC.

The VooPoo Drag quickly became the mod most associated with the brand. It features a zinc alloy frame with two inlaid, resin panels, one of which was removable as it acted as the device’s battery door. The Drag is a dual-18650 device, also with the GENE chip inside, and also with the same vaping outputs as the Alpha One, save for the LOVE mode, which is unique to the latter mode. 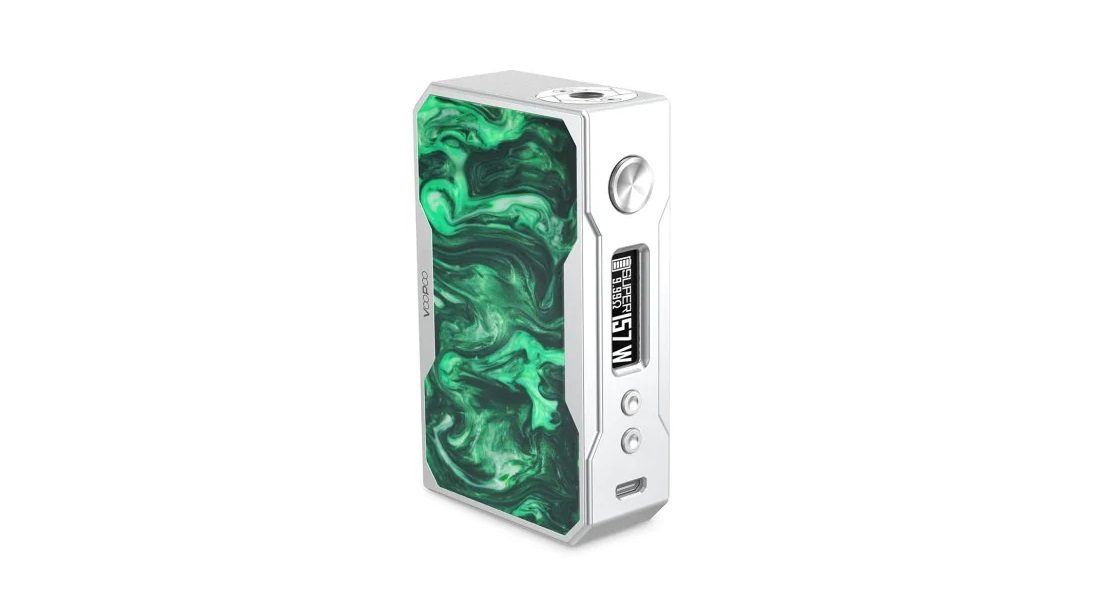 The Drag has a high-power output of 157W, which is accurate for a dual-18650 device. The Drag also has a successor, the Drag 2, that features a reduced-size frame that is much more ergonomic and compact than the original.

The VooPoo TOO is a dual-18650 device that also carries the GENE chipset inside its zinc alloy frame. The TOO is another mod with detachable side panels, although the TOO has interchangeable panels that can be mixed and matched.

The unit features a side OLED screen and a two-button control panel. The mod also enables a custom curve mode along with standard outputs like variable wattage and temperature control.

The VooPoo Alpha One is a departure, stylistically, for the company. It does not look like any other mod in the brand’s roster, but it does perform on par with devices like the Drag or the Drag 2. The mod has the GENE chipset inside that gives it wide-range of vaping functions, is very accurate, and has a fast firing time.

The wattage rating is a little inaccurate given that it uses only two-18650s, but if users were to vape at lower levels, the GENE chip lets it deliver exceptional performance every time. The frame of the mod is also something to behold. There are few, if any, devices that look like this mod and that makes it a great addition to any collection of mods, as well as being a high-performing vaping device.