VOOPOO TOO 180W Box Mod Review: What Strange Voopoo Is This?

Why would you name your company VOOPOO? I mean, maybe it’s a case of lost-in-translation, VOOPOO being a Chinese conglomerate who got into the vaping business after acquiring the American imprint Woody Vapes in 2014.

But still, doesn’t anyone at VOOPOO knows that vape reviewers have a maturity level of eight-year-old boys, including me? Anyway, now that we’ve gotten that out of the way, we can get down to business.

VOOPOO is relatively new to the vaping game, having released their Drag 157W mod a few months ago, which went unreviewed by me. Now I have the opportunity to check out their latest mod, the TOO 180W box mod. 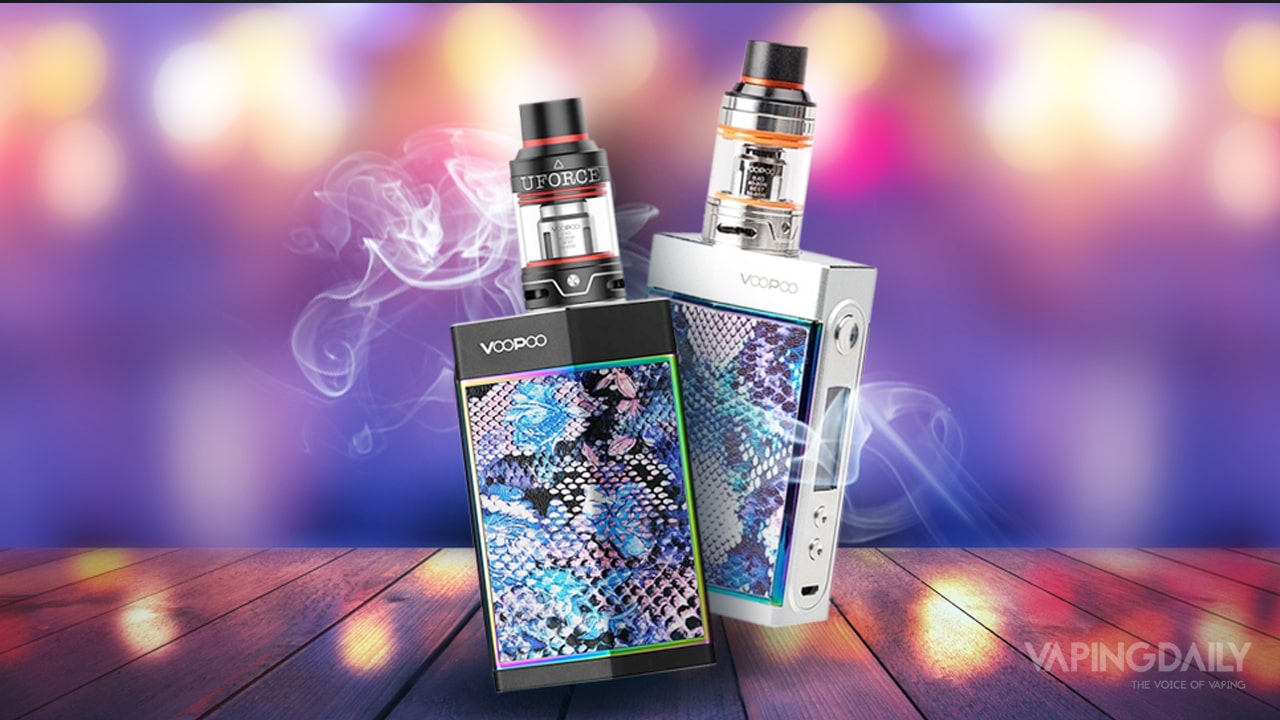 The main feature of this mod is the dual battery option, which allows the device to be powered by one or two 18650 removable batteries. This interchangeability is fostered by the push-and-pull battery doors on either side of the mod.

The versatility of the batteries also begets how powerful the mod, and by extension, your vape can become. Having only one cell in the unit enables a power output of up to 80W; two batteries inside take the device to a maximum power output of 180W.

The VOOPOO TOO doesn’t come as a kit, so there won’t be any coils or tanks included in your package. Here is what you’ll find inside:

I have to say I was impressed by the interchangeable panels that came with my VOOPOO TOO. VOOPOO makes a point of not being your grandfather’s vaping company, and proudly proclaims to “refuse boring,” like it was an official party dictate – “REFUSE BORING!”.

But the panels were trippy, man, like they were made from the hide of a psychedelic, Amazonian, python. The panels were scaley, brightly-colored and the right kind of loud. And, surprisingly, they had some heft to them, since when you take them off the rest of the mod becomes noticeably lighter (with and without the batteries).

Of course, in this oversaturated vaping market, a lot of companies struggle to make their mark. Some companies choose to make their devices technically superior, like Vaporesso, but it looks like VOOPOO is taking the aesthetic route in making their devices stand out visually. And I, for one, felt they did an excellent job at that.

The panels, of course, belie how technically accomplished the device is since it is by removing the panels you see the other distinguishing feature of this box mod. There is a battery port on either side of the mod; they can both be loaded with 18650 batteries or not, since the mod can also be run with one battery. And that is the main selling point of the unfortunately titled VOOPOO TOO.

Moving on to the mod’s build, the mod itself is made of both zinc and aluminum alloy; the panels being the aluminum part and the top and bottom panels being the zinc parts. The 510 connector pin at the top of the device is not centered, precisely, it sides more in one direction than being directly central.

The 510 connector awkward position was strange, but because the mod splays out a bit in the center, it still left enough room to attach a tank as large as 30mm in diameter. Despite the side panels being removable, the TOO features a side OLED screen with a top firing button and two selector buttons underneath the screen.

The USB port is also on the screen side, right at the very bottom. The other side of the mod was left alone mostly, and only features the VOOPOO TOO logo, but nothing more. So I think there could have been something done with this amount of real estate that went untouched.

Finally, on the bottom of the mod, there is a ring of pinhole battery vent holes.

Despite its two-battery option, the battery port marked with a large “A” inside must always have a battery installed. The optional “B” side is where you would place the second battery to make the device a 180W mod.

And I thought it was great that that transition was effortless. Having one or two batteries in the device, you could either remove or install the extra “B” battery, and you didn’t have to do anything else; the device automatically switches from 80W to 180W and vice-versa.

I decided to start with two batteries. And with my two 18650’s installed, I turned on the device by clicking the firing button five times. Since the mod has only three buttons, and not a lot of vaping modes, all the menus and different features were easy to access and navigate.

The main screen displays the resistance, vaping timer, wattage, and voltage. Apart from the standard VW mode, the TOO also features temperature control, and power modes, which translates into having a “soft” mode to regulate the power output whenever you take the mod to high-wattage levels.

The GENE chipset inside the mod also allows for a faster heat-up time that comes in at less than 10ms. You can also change the wattage levels in .1 increments, thanks to the GENE chipset. The VOOPOO website also offers downloadable firmware that you can install into the device to update and add new features.

I didn’t see this mentioned on any of the specs that VOOPOO has on its website, so I wasn’t expecting to find it. But when I was scrolling through the menu options and saw the “M” icon I just assumed that it was memory settings, but in actuality, there are curve options buried underneath the memory settings.

Once you select the memory settings, if you click the firing button four times, it’ll take you into CCT. And, if you are a regular reader of my reviews, you’ll know that custom curve wattage and custom curve temperature are two of the most innovative vaping features to have come in recent years, and I love them.

I was sure that the GENE chipset had more to offer than just a faster firing time and battery protections and here it was.

The VOOPOO TOO’s dual battery option threw me off somewhat. I wasn’t sure how to take it, as a pro or a con. I started off with the two battery option. So I attached the Goon RBA onto this mod since I loved its performance and its wide diameter fit perfectly flush on the TOO’s body.

The Goon RBA works best at around 100W, so I kicked up the wattage, and engaged the “soft” mode on the device by holding the two selector buttons, which is how you access the other menus on the TOO. The speed with which the device fired was evident.

The clouds were luscious, thick and heavy. I threw the airflow holes on the Goon wide-open, and the vapor production was stupendous. At a 100W, the device matched with the goon worked wonders. The flavor profile was spot-on too.

Although the VOOPOO TOO 180W box mod has a slightly higher power output than the Vaporesso Nebula 100W box mod, I still decided to compare the two since the Nebula does have a feature comparable to the VOOPOO TOO’s two battery option.

The Nebula comes with a 18650 adapter, so you could install a 18650 battery rather than using the new 26650 battery the Nebula also takes. Although this interchangeability of the Nebula does not translate to a higher power output, just a longer lasting battery.

Nevertheless, even though I was impressed by the Vaporesso Nebula’s design and build, I was much more taken with the wildly electric colors of the side panels on the VOOPOO TOO, compared to the somewhat muted, and straightforward macho build of the Nebula.

But, performance-wise, although the TOO does perform well, I have to go with the Nebula’s versatility and personalization. Since, in the end, we are comparing how a device produces vapor, and when you take away everything else that is the only factor that matters on any device and the Nebula does it better than the TOO.

For my first time with a device from VOOPOO, the TOO 180W box mod, I was not let-down. I didn’t have many expectations coming into this review, but I did leave intrigued by what else the company with the head-shakingly dumb and atrocious name has to offer next.

I loved the design of the side panels. They were just wild and vibrant enough for someone like me who loves unusual and bold colors, although they could have been attached to the device more securely.

The mod performed well enough that I could see myself making it my daily device. The one battery option was especially attractive to me since I don’t like to vape at higher wattages. And with those psychedelic side panels, it certainly would make a statement.

5 comments on “VOOPOO TOO 180W Box Mod Review: What Strange Voopoo Is This?”