The Vaporesso Switcher box mod kit features the dual-18650 Switcher mod and the NRG sub-ohm tank. The Switcher carries the new Omni 2.6 board, which is the first Vaporesso device to take it. The 2.6 board offers unrivaled vaping control and customization, more so than previous Omni boards.

The Vaporesso Switcher box mod can handle standard fare like variable wattage (up to 220W), and power setting for nickel, titanium and stainless steel. Curve mode is also enabled for both VW and TC, as with most other Vaporesso machines. Besides the board, the other notable feature of the Switcher is its interchangeable zinc alloy sleeves, and the LED side panels that users can customize. 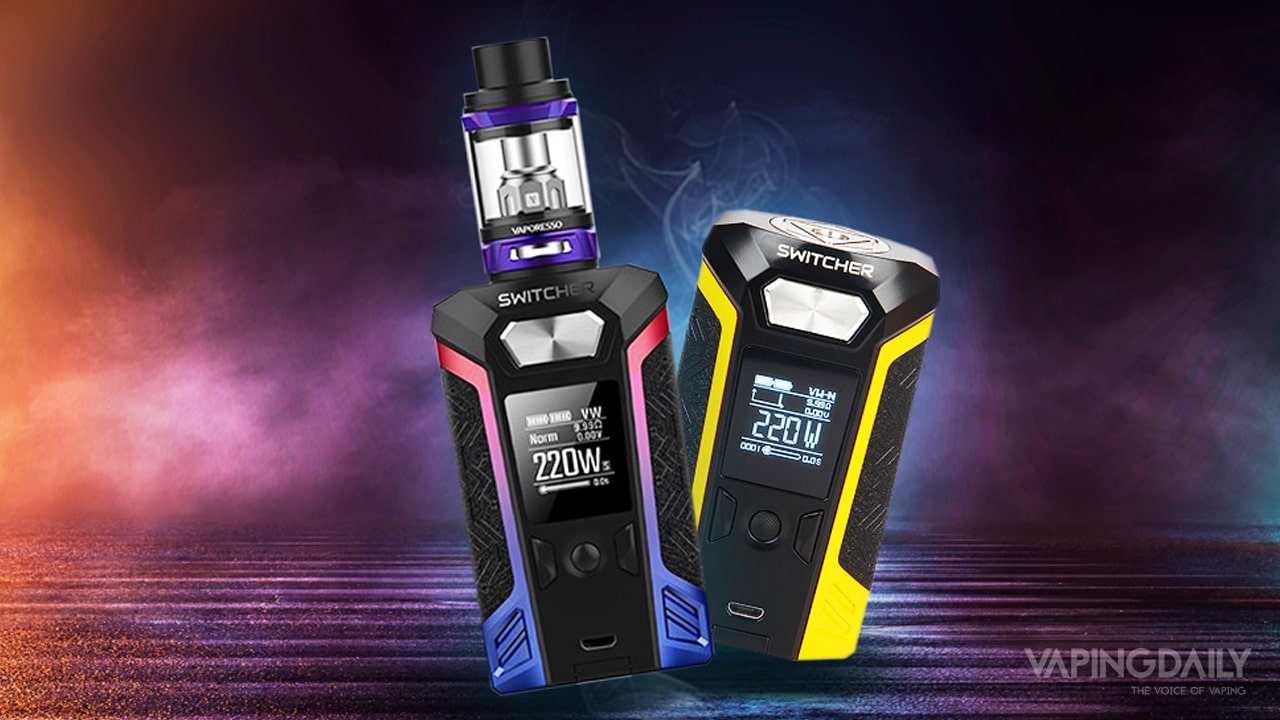 Even though there are two versions of the Vaporesso Switcher mod (LE vs. standard version), the box mod kit contents of both are the same:

The Vaporesso Switcher is an unique-looking box mod. There are currently nine different removable sleeves available for the mod that users can “switch” around. The sleeves, jackets, exteriors, whatever they are called, are a zinc alloy, and they fit over the mod like a glove over a hand. On some versions of the mod, there are LED panels on either side that vapers can also customize. 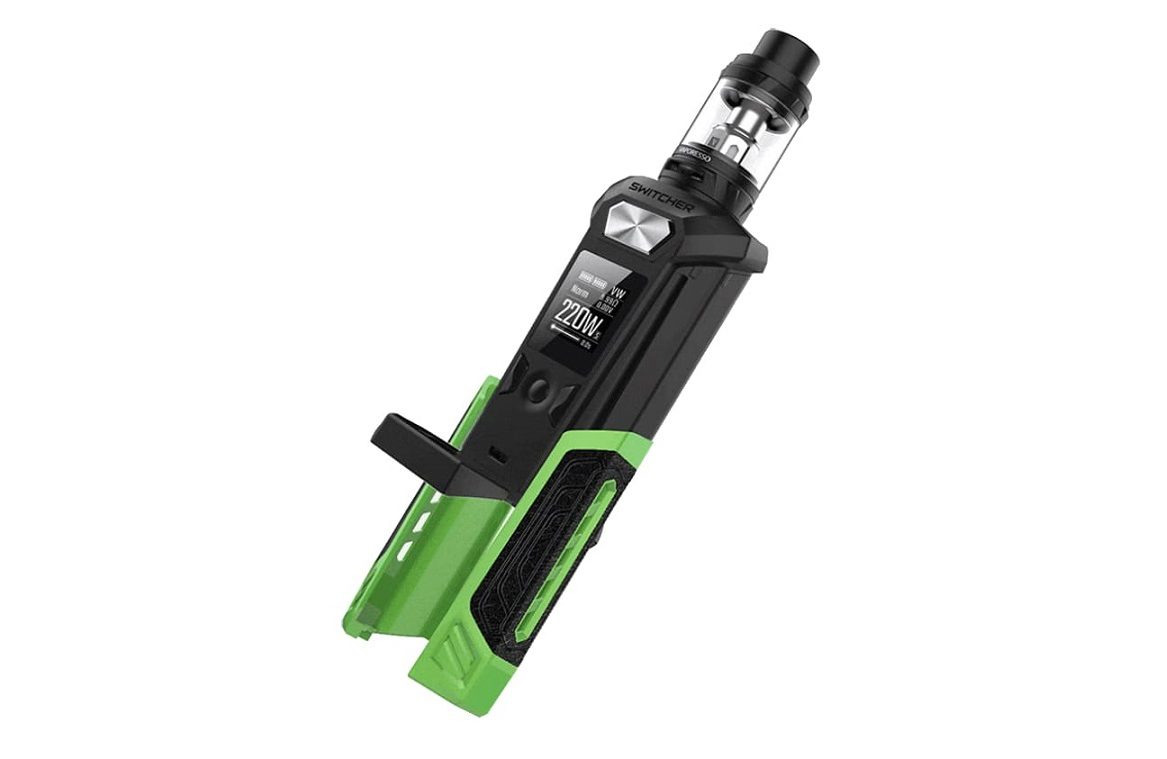 The LED panels are a feature in the LE version of the kit, of which there are six; the “standard” versions of the mod leave out the LED lights, but still keeps the removable plates. Users could even go without the interchangeable plates and leave the LEDs uncovered for a special light show.

Despite the flimsy look and feel of the plates, they hold up pretty well and do not rattle or get in the way of using the mod. The rest of the Vaporesso mod is pretty much the front-facing, 0.96 inch OLED display, and the large, stainless steel 510 connection up top.

One important note about the 510 is that it is centered so it can support the most massive tanks (let’s say a maximum 28mm ((1.1 inches)) without any visible overhang. There is also a well-placed, hexagonal firing button above the OLED screen, and the two selector buttons are sitting directly underneath.

One feature about Vaporesso mods that stand out from the rest is their use of an independent selector button. Rather than using the firing/power button to confirm a selection on the screen’s menu, Vaporesso includes the selector button to perform that function. There is a USB charging port also located on the front-facing user interface.

The device has a bottom-loading battery bay, where users install their two 18650 cells. The curious thing about the construction of the bay is that the door also keeps the plates in place. To remove the plates, users need to unlatch the hinged door to take off the exterior.

The Features of the Thing

Besides the inclusion of the four-button control panel, the new OLED display on the Vaporesso Switcher offers a more interactive experience. Some menu selections on the screen can be made through “ghost” keys, which are just on-screen buttons that users can touch.

Getting into the menu, and then navigating it has always been straightforward with Vaporesso mods. They are one company that consistently makes easy-to-use screens. This fact coupled with the separate selector button makes the Vaporesso Switcher that much easier to use. 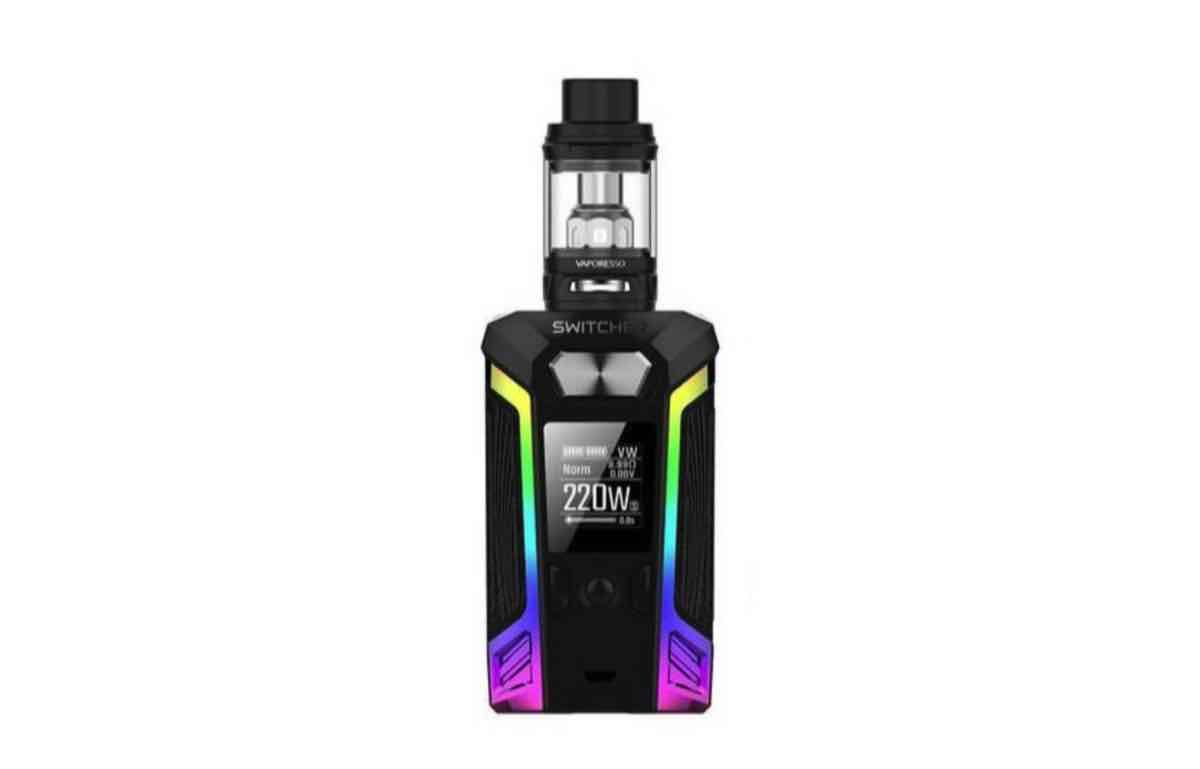 To get into the menu, users need only press the central firing button five times. Once in, users have numerous options to choose from. They can choose from different vaping outputs, which are a combination of variable wattage, temperature control, curve mode, and bypass.

The selector button also gives the user control over the non-vaping settings, like the LED lights (if you have the LE version), or setting the time on the device’s digital clock, which turns on whenever the device is on, but not in use.

The Switcher kit also includes the NRG tank, which is a new sub-ohm tank that uses coils from the GT coil family, also from Vaporesso. There are two coils in the kit, both of them rated for 0.15ohms. The GT 4, which has a dual-coil build inside, vapes best between 30 and 70W.

The GT 8, with a quad-coil build, can vape at higher wattages, at around the 50 to the 110W range, but its recommended range is somewhere between 60-80W. All these recommended ranges are well within the capabilities of the Switcher, so vapers can fully enjoy the coil’s vapor production power.

The NRG tank can hold up to 5ml of e-liquid and features a durable, stainless steel and glass construction. The top of the tank features and push and swivel design to access the fill ports. Users need to push back the lid and rotate it back. 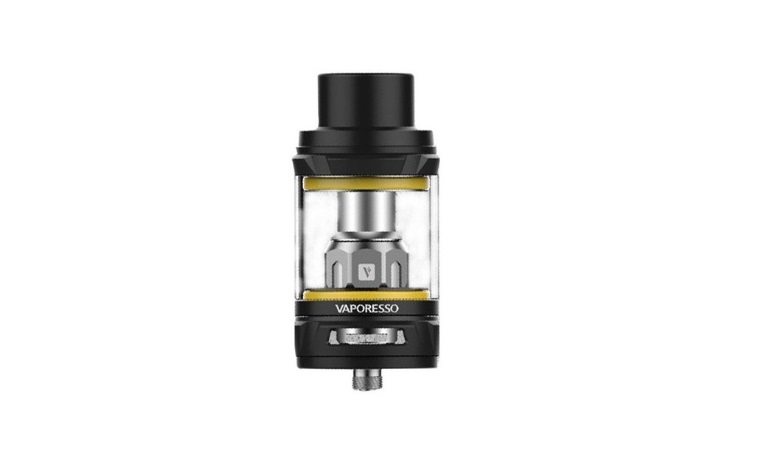 Underneath the tank is the airflow adjustment control. There are two ports, which measure 13.5mm (0.53 inches) by 2.5mm (0.10 inches) that users can leave either fully open or closed. Also on the bottom, the NRG features a heat-resistant layer on the base, which is very necessary, considering the mod can reach a high temperature of 600F.

The tank also uses several different coil types, including the CCELL coils, also from Vaporesso that are rated at 0.5ohms, and can vape between 15-40W. The only drawback to using the included NRG tank with the Vaporesso Switcher mod is the broad area atop the device dwarves the 24mm (0.96 inches) tank. Smaller tanks may look a little awkward on the wide-510 connection, but vapers who enjoy using larger atomizers should love this extra space.

Vaporesso mods are known for their high-level performance, especially their accuracy. A vaper can input an exact setting, and the mod will do precisely what they want, that kind of control is what devices with the Omni board offer. The Switcher is no different.

Whether vapers use the NRG tank or attach another sub-ohm tank, the mod has no problem handling different coil resistance or wattage settings. There are a total of ten different vaping outputs that range from variable wattage to heat setting to TCR and curve mode, as well as bypass mode.

There are the sub-groups within each output, of course, like the pre-heat settings – High, Medium and Low – in variable wattage mod or the different coil materials (nickel, titanium, and stainless steel) in TC mode. The curve mode is only for VW though and leaves out the option for TC vaping.

The board offers about the same options as the other Omni boards like the 2.0, with a few minor changes (like the on-screen keys, and the puff counter) that do not affect vapor quality. Using only the NRG tank with the Switcher, the two performed well together.

The airflow control on the atomizer is very versatile, and it allows for several types of draws, from a tight one to a looser, cloud-inducing airflow. As for power and heat settings, the mod does an outstanding job no matter what the input. As it is rated at a maximum of 220W, which is high, vapers can be sure that anyone vaping below that high level will get a great vape.

Staying only at the low-lying 70-80W was enough to produce good vapor. Switching up the coils and using the GT8 instead of the GT4, the mod could go much higher, but not by much. The vapor production was just as good, not as hot, but still more voluminous.

Accurate, and restrained TC vaping is also within the scope of the device’s abilities. Vaping at around 400F, the device did start to get a little warm, but not by much. Pushing it even further, around 500-550F the mod started to heat up, and the vapor also got steamy. But the taste remained, and with a semi-open airflow, the clouds were great.

The Vaporesso Switcher vs. the Innokin Proton 235W vs. the Vapor Storm Puma 200W

The Innokin Proton is a dual 18650 mod that pairs with the Scion 2 tank. 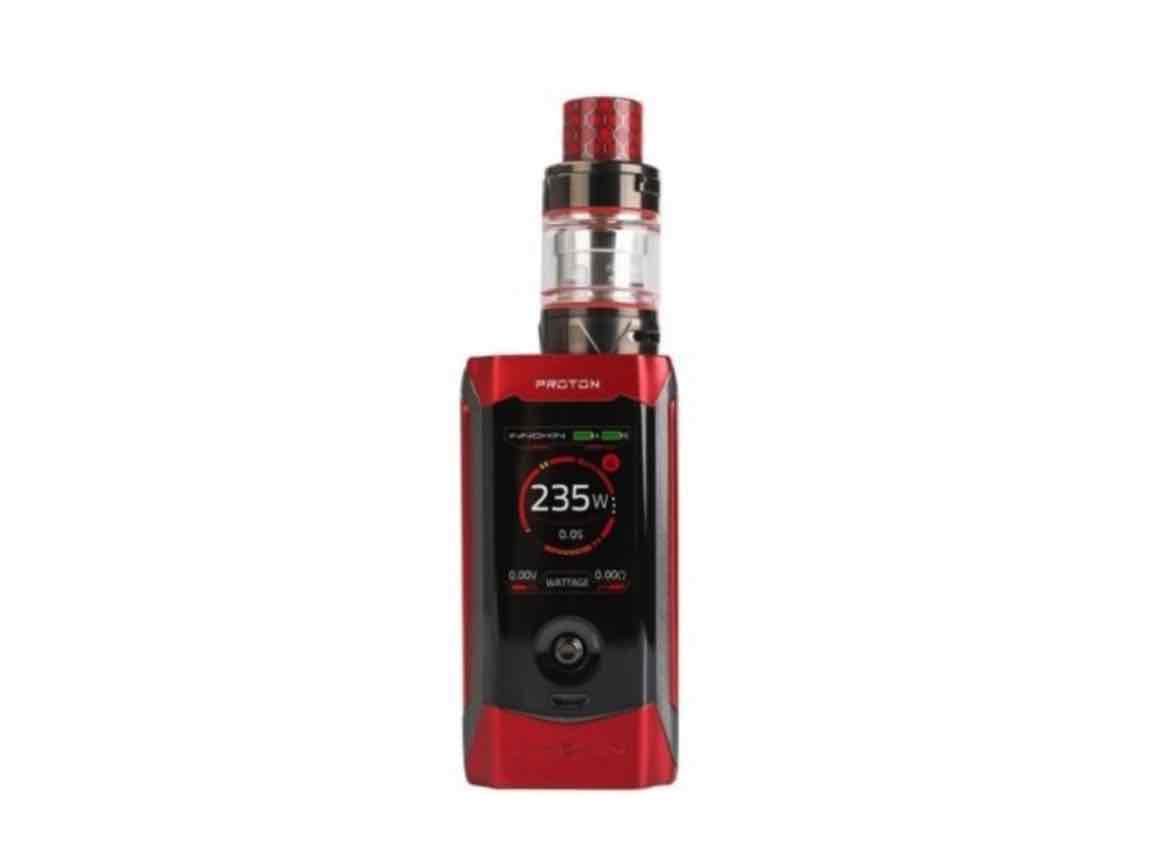 The Proton features a front-facing, 1.45 inch TFT screen that vapers can use with a joystick-style control switch. There is a side firing button for an ergonomic grip — the Proton vapes in VW, and TC only. The Scion 2 tank comes with two coils, a BVC (bottom vertical) 0.5ohm coil, and a mesh-style, 0.15ohm coil.

The Vapor Storm Puma is a unique-looking, dual 18650 mod. It features an all ABS exterior that can come in several color options. 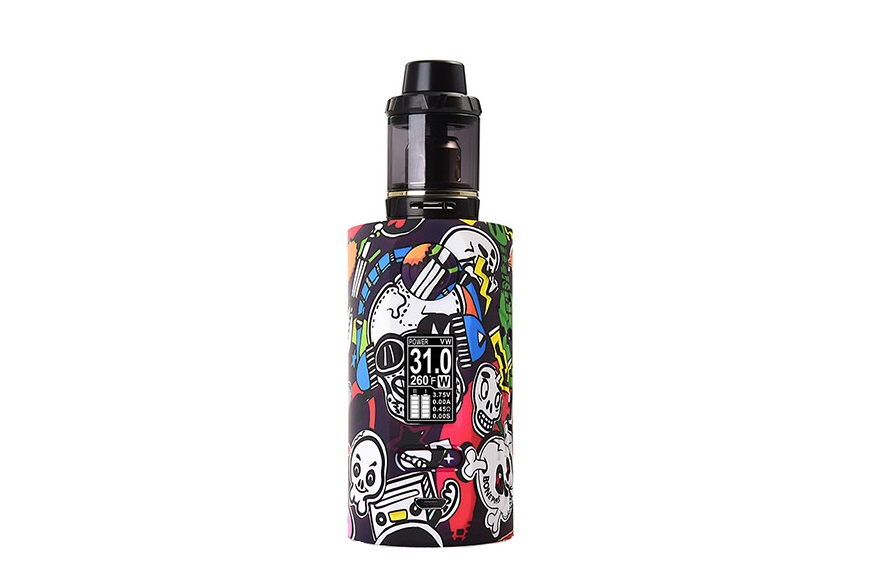 The unit has a central OLED screen that measures 0.96 inches, and a large, circular firing button above it. Vapers can use variable wattage, temperature control, and bypass mode.

The Last Word on the Vaporesso Switcher Kit

Have you ever used Vaporesso vape mods before? Have they performed as well as other high-tech mods like the DNA or YiHi? Are the mod’s screen and the menu more comfortable to navigate with the selector button? Let us know below your thoughts about the Vaporesso line of tanks and mods.

Vaporesso, as a brand, occupies a middle-ground when it comes to making quality vaping vape mods. They are very close to being as good as DNA with their boards that offer exceptional performance and accuracy. The Omni board also offers curve vaping, and it was one of the first boards to do so.

The Vaporesso Switcher has all of the good qualities of the Vaporesso brand, but is pretty heavy , so it is not pocket-friendly. The Switcher is an excellent introduction to Vaporesso, but anyone looking for a sleek, portable, and powerful vape should try one of their other vape mods.