The Smoant Cylon is a dual-18650 device with a zinc alloy chassis and an intelligent ANT217 chip. The Cylon features a front-facing 1.3” TFT and a three-button control panel. Users can find several vaping mods on the ANT 217 chip. These include vaping in wattage, temperature control, and curve mods.

The device features a high-power output of 217W with a fast firing speed of 0.015s. The accuracy of that power rating is correct, given the precision and quality of the chip. The device features two leather-wrapped panels to give the device an extra grip and also a design accent.

An Up-Close Look at the Cylon

The Smoant Cylon stands at just 90mm (3.5”), and it measures close to 32mm (1.2”) wide. The unit has a square side-firing button close to the top. The button sticks out from the side of the mod, and it is very clicky. It also features some groove lines to give it extra grip. The two adjustment buttons sit on the front of the device, under the TFT display.

The device features a circular, stainless steel 510-connection up top that can hold many different-sized atomizers, even ones measuring 30mm in diameter. The pin is spring-loaded and gold-plated, so users can easily attach any atomizer. The device uses two 18650 cells to power itself. Users can install the two batteries via the hinged, bottom-battery bay door. 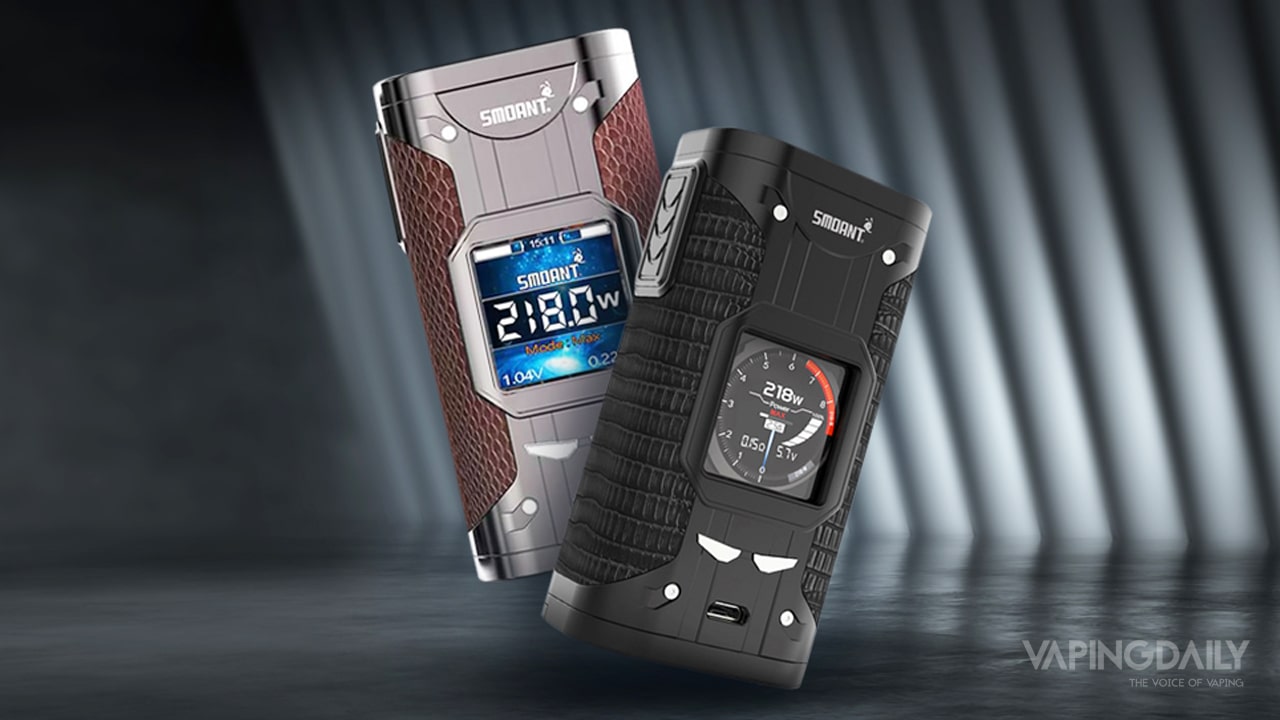 The rest of the mod features industrial design accents like the exposed screws at the top of the device. There are the zinc-alloy sections that are chiseled and give the mod a hardened look. The front-facing leather panels also give the mod a certain, rugged appeal.

The mod can come in two color options, brown or black, which are excellent choices for this mod as they keep it in line with its sophisticated stature. The device has a diamond-shaped logo on its backside that looks good but is only yet another tasteful design accent. There is a single USB port for charging the cells or loading firmware updates onto the mod’s chip.

The Smoant Cylon does not come with an accompanying atomizer. It comes as a stand-alone mod but with the usual accessories that most kits come with. 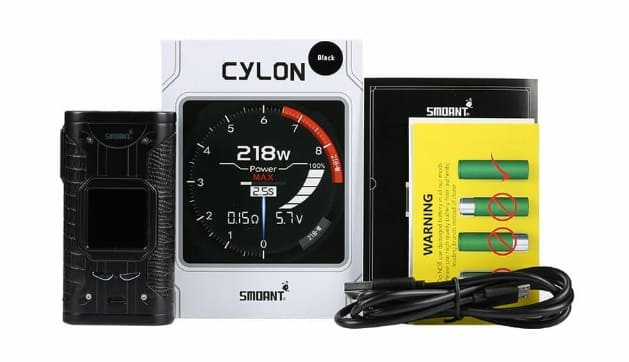 Users will find the following in the Smoant Cylon box:

The device has a mix of a durable, zinc frame with the softness and sophistication of the leather panels. The leather sections use genuine leather and come in either a Tarnish Brown or simple Black. The device is also not bulky. It has a shortened stature, so it is not so tall or cumbersome. The buttons all work well, and the bottom battery-bay door is easy to open, without having to rely on magnets to keep it in place. 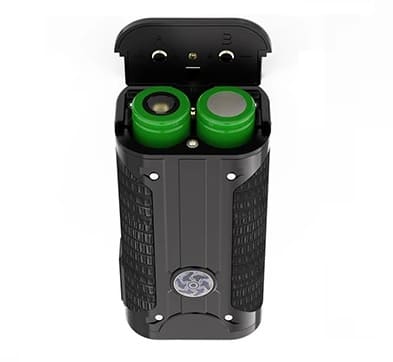 Vapers who like to vape around the 50W or 90W range will find the mod has great battery life. Within those parameters, along with a low-resistance coil, users could vape for a good two days.

The Smoant Cylon needs only five clicks to get started. Users can later attach their atomizer or attach one and then turn on the mod so the internal chip can read the coil and set the resistance. The device makes use of a bigger-than-usual TFT full-color screen that makes navigation fun and simple.

There are only four icons on the mod’s home screen, which divide into:

Within the two vaping mods, the ANT217 chip offers each a separate curve setting, for both outputs, VW and TC. VW mode features three power settings, Minimum, Normal, and Maximum, while TC mode has the standard vaping for nickel, titanium, stainless steel, and TCR.

Users can adjust the brightness of their display or set the time and date or even choose a different theme for the home screen in the Settings menu. The Wallpaper menu allows users to change the wallpaper of their home screen. There are nine available options, although it is not certain if users can upload their preferred image onto the home screen.

The Cylon has all the things that vapers look for in a mod, save for, maybe, bypass mode. The mod operates at both the mouth-to-lung and direct-lung levels, so it appeals to both styles. Users can ramp up the speed to as high as 200W and get authentic, sub-ohm experience, as the device quickly pushes out that amount of power without so much as a crackle. 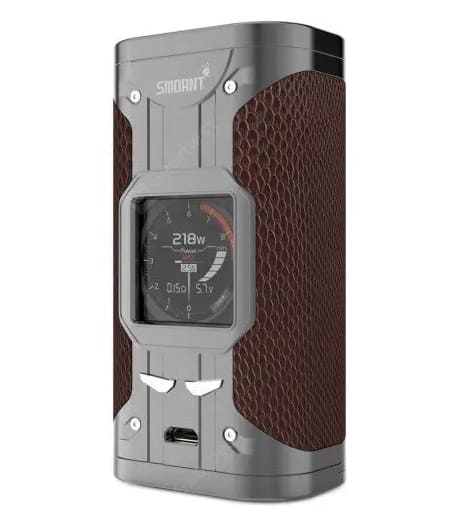 At the other end, though, users can park their wattage at 50 or 60W and still get a quality, mouth-to-lung hit. With a large amount of space atop the mod, users can also try out several tank types and sizes with different design accents. The preheat mods all did what they were intended to do, which is to give a little bit (or a lot ) of power to the coil as the device heats up to its inputted wattage.

The curve settings add even more personalization, as users can set exact values over every second of a five-second duration for the device’s output. Users can enable the “curve” mode in both variable wattage and temperature control mode.

The great thing about the leather-and-metal facade of the mod, users will have an easy time finding a mod that matches or clashes perfectly with those choices. The device’s user experience is also straightforward. The big, bright TFT display shows everything in a clear, precise way, so there’s no confusion.

The Smoant Charon Mini stands at around 90mm (3.5”), so it is not so different in size from the other Smoant device. The Charon does have a larger screen (2”), and it has a more colorful exterior as it uses a carbon-fiber chassis that comes in several vibrant options. 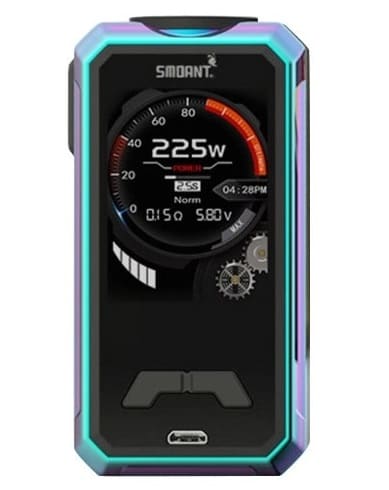 The tech specs of the two mods are also similar. The Charon can fire as high as 225W, and it also has three preheat mods, along with a curve mode for VW and TC. The Charon also uses two 18650s, and it features an internal charging rate of 1.5A.

The VooPoo Drag 2 is an update to the popular Drag mod that used dual-18650s and came with the GENE.FIT chipset. The chipset allows the device to reach a maximum power output of 177W, which is an accurate reading. 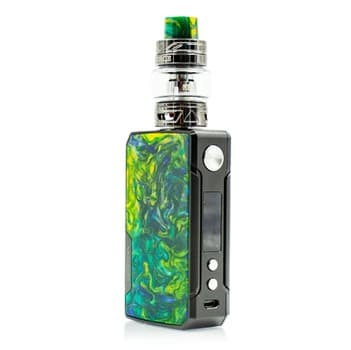 The GENE.FIT also features three distinct power mods that let users choose between saving battery life, increasing cloud capacity, and increasing the flavor. The Drag 2 is much smaller than the first device, but it still uses removable panels inlaid with resin that attach with magnetic connections.

Final Thoughts: In A Class of Its Own

The Smoant Cylon borrows from the look and feel of the YiHi SX Mini G-Class, a popular mod that features one of the best and most accurate chipsets in vaping, the SX550J. It borrows that large, centered TFT screen, along with its height and form factor. While the G-Class is a highly advanced device, the Cylon can hold its own, as it appeals both to newcomers and experienced vapers.

The large screen makes navigating the menu system very easy. The device’s options are versatile enough to satisfy the most sophisticated vapers while not being so complicated as to put-off other vaping styles. The wide top of the device can accommodate many-sized tanks, while the firing time is sure to provide quality vapor every time.

Have you used any of Smoant’s mods? How do you think they compare? Let us know what you think in the comments section below.