KangerTech has made another move into the mini starter kit market with the Kanger Subox Mini Kit. We found this little device packs almost everything you’re going to need to get into vaping. The Subox also has some features not just for new vapers but also veteran vapers like a 1.5 coil option and a rebuildable deck.

Checking Out the Box Mod 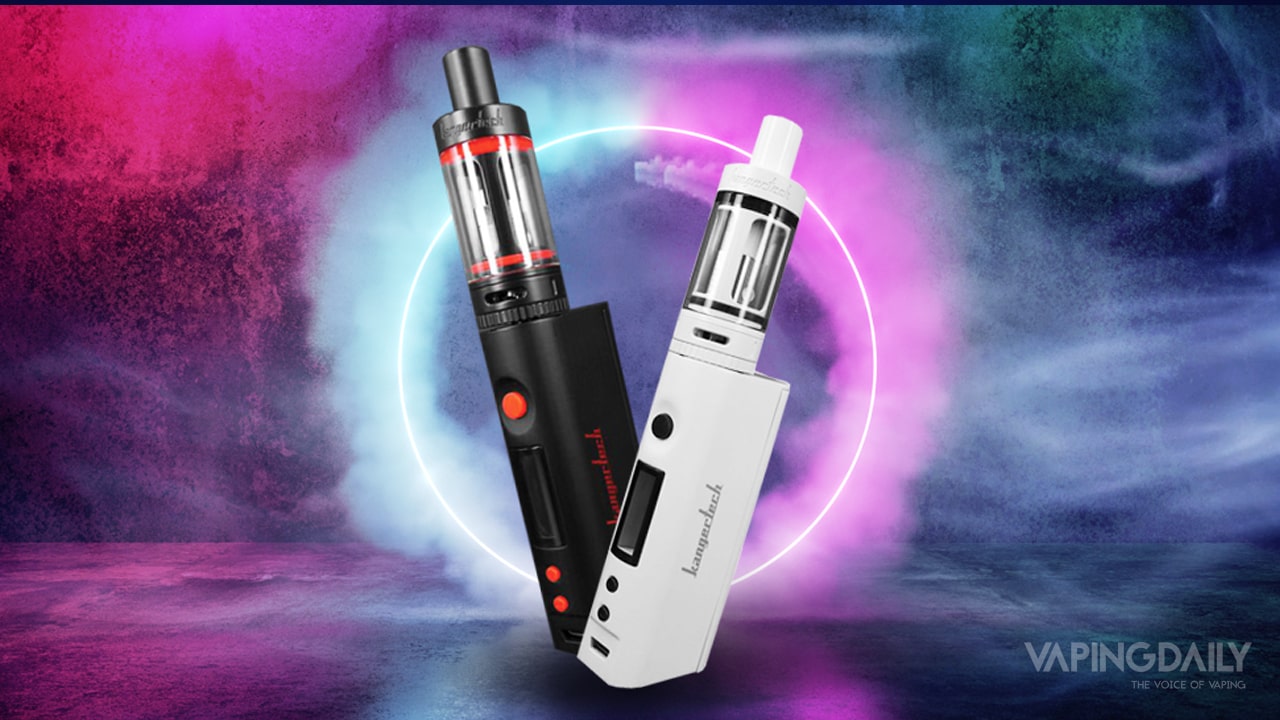 First of all, when you get the device (we got the black and red version), you will notice the box it comes within right away as it is quite impressive. It has a deep red color and a black accent with the device in the middle separating the two tones. I think it looks pretty cool and adds a bit of excitement to the process of unboxing a Kanger Subox Mini Kit.

On the back, there is nothing special, the meat of the info is actually when you first open the box. KangerTech has designed this box to open up like a book, which I like – no more losing the top of the box. The latching side of the box is held by a magnet that I found holds everything relatively tight.

Digging into the box, I mentioned before that all the info is located on the inside of the box. It is actually on the backside of the front flap. The info on the fold informs you on everything you should be getting in the box. 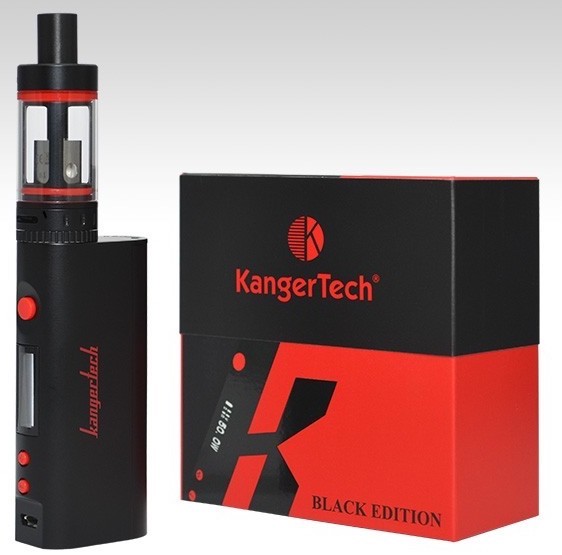 The packaging overall after opening the box of the Kanger Subox Mini Kit continues the interesting red theme KangerTech has gone for, I suppose the did so because the device itself is black with only a few small red touches here and there. The user manual and other information come sitting on the device and tank at least for our kit, everything we needed to know about the Kanger Subox Mini Kit was included in the detailed manual.

Finally getting to the to the device, it is at first glance a nice piece of kit. Not only that, the tank sits just next to it which in itself looks super cool all black with red o-ring seals.

First off I really like the feel of Kangertech Subox Mini, it has a ceramic type paint coat on it that just gives off a smooth yet grippy feel. The fire button, which is red like all the other buttons is nice, big and clicky. I found the placement to be okay above the OLED screen. Talking about the screen, it is quite small, but the device in all is pretty tiny, so I did not expect too much here. The plus and minus buttons were functional below the screen, and I have nothing particular to say about them.

A nice plus is that the USB charger is just below the buttons near the bottom of the front, so I was able to charge the device while having it stand on my desk – however, I always do recommend to use an external battery charger to charge your batteries.

The back of the device houses the magnetic battery latch, which just pops off on easily by the four small magnets at the top and bottom, at no point did I feel like It would just fall off, so I think they did a good job here. Lastly, the top of the device does house a 510 connector.

The Size, did They get it Right?

The overall size of the Subox and Mini Tank is almost perfect for me, it is not a large clunky two or three battery mod, so it is pretty portable. Holding the mod in hand, I could almost entirely hide it in my palm. If you are a stealthy vaper or just want something you can keep in a pocket, this is not a wrong choice.

The tank holds 4.5ml of juice, and they call it the mini tank, but I have to say that at 4.5ml it is of standard size. It does fill from the bottom, and I did notice that the airflow holes are a bit tight which made it feel that I may start to unscrew the base off.

As with most mod kits, the required 18650 battery is not included with the Kanger Subox Mini Kit; however after you do purchase or cannibalize one from another mod, KangerTech consists of a battery sticker as the magnetic battery cover has a KangerTech logo machined out. The sticker which comes in black or red goes on the battery accenting the rest of the device.

How Does the Kanger Subox Work?

To turn on the device five quick presses of the fire button will do, and the same again to turn it off. As soon as the device is on there are four distinct information icons on the screen, and those are:

Tapping the plus or minus buttons increases or decreases the wattage by 0.1 increments, holding it down changed the wattage levels by one whole watt. Holding the plus and minus key flips the screen, and That is it for controls.The mod does not have a temperature control mode which is honestly sad to see. 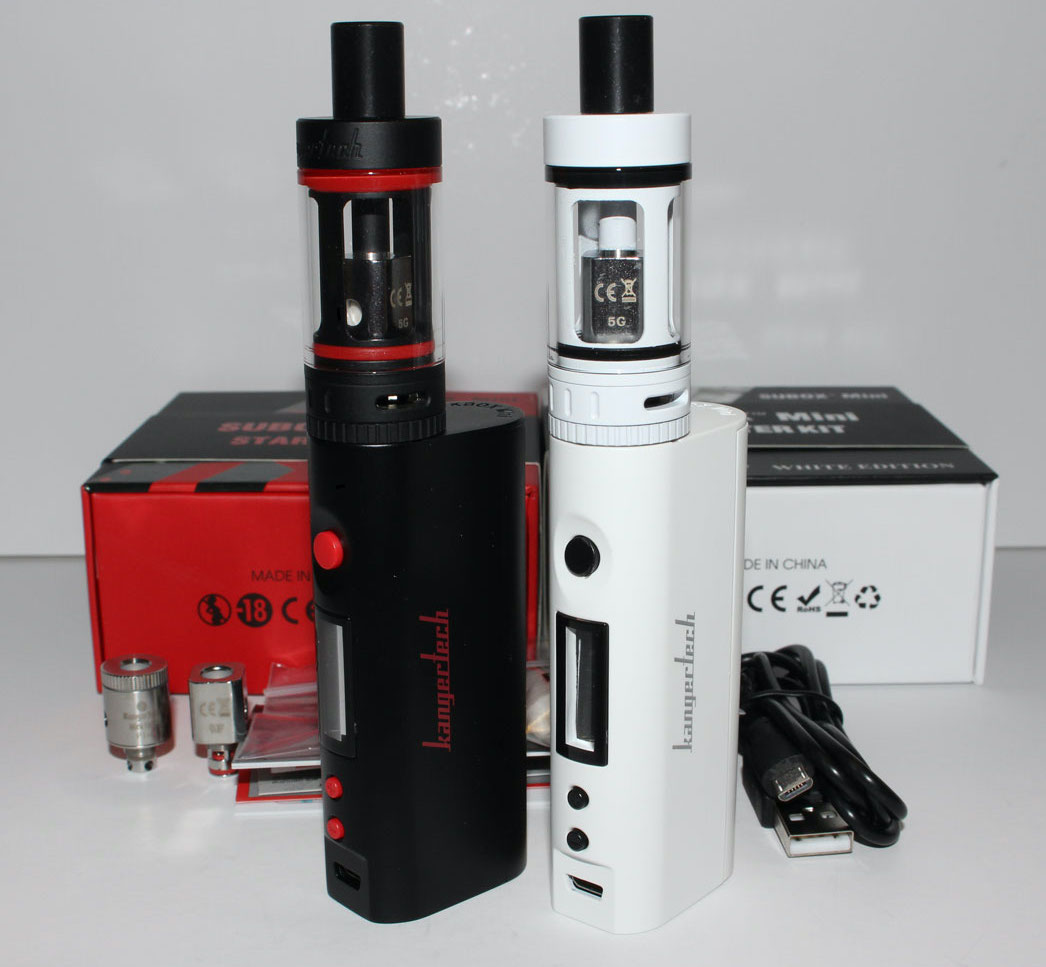 Getting everything set up on the device is a cinch, I used Nude S.C.P. vape juice throughout my testing and quite enjoyed the fruity experience. My preferred vaping wattage levels are between 30-50W and this device just makes 50W, so it was right up my alley.

I started off at 10W and only got the faintest amount of vapor. At 20W it was still relatively cool, but the amount of vapor and flavor for me was always lacking. Bumping it up to 30W is where I was starting to enjoy myself the vape was warm and flavorful, and the clouds were much larger. However, I must mention that I did poke holes into the coils inlets as it seemed like they had packed it too tight. I did read around that if you do not do this, it could lead to burning the cotton. 40-50W was getting into the too hot territory, and I found myself having the airflow open all the way. I must say though at these wattage levels I was getting massive clouds with still pretty decent flavor, nothing however like the lower wattage levels.

I think the mod and tank of the Kangertech Subox Mini did a fantastic job providing me with great flavor and large, exciting vapor clouds.

Some Issues of the Kanger Subox Mini

Not every device has it easy. Growing pains are a real thing in almost everything. The Kanger is no exception as it too has problems of its own. However, as of late most of them seemed to be ironed out by Kangertech or avid vapers looking for fixes.

It is a bit of a disappointment not to see this option included in the Kanger Subox Mini Kit, but it is not the end of the world. Maybe in the next version, they could include it as temperature control devices are becoming relatively well priced, so adding this feature would be a smart move.

On some of the early version of the kit juice would leak out from the airholes, which was unbearably annoying, not only are you waiting for juice, but it would just make a mess of things. Also, on top of it leaking through the air holes, we had one of the coils leak on the bottom seal because of a small metal wire not giving it a complete seal. Though, I cannot confirm if it is every mod it did occur on ours.

Cleaning the mod and tank is as simple as any other device, just remove the battery and tank. Disassemble everything and grab some alcohol wipes or warm water and give everything a good wipe down. I managed to do this within ten minutes and was back up and running after letting it dry (about 30 mins in total).

The Decision on the Kanger Subox Mini Review

All in all, I think KangerTech has done a pretty good job with the whole creation of the Kanger Subox Mini Kit. The choice of two colors is a bit limiting, but they both look nice, as the design of the mod itself is just terrific. This device I think could appeal to a lot of people if it were not for some of these easily fixable problems like the leaking and lack of temperature controls.

If KangerTech can work on improving the device for the next iteration, I think they will have a real winner on their hands which could force a lot of other manufacturers to take notice. In the end, if you want a small compact device that can get you get flavors and cloud and you can look past some of the negatives then you should definitely check out this device.