I guess I spoke too soon. Just as I was heralding the arrival of a toned-down box mod, the Aspire Zelos 50W kit, I hear a deafening thud emanating from my desk. And when I arrive, what do I see but the new offering from Kangertech, the Kangertech IKEN, which must be Chinese for “face-melter” or “lung-melter” or something.

I don’t recall ever reviewing something from Kangertech. They are the makers of the well-publicized Top Tank atomizer and the KBox mod, but of course, their reputation precedes them.

I’m looking forward to testing out this gargantuan (concerning the power output, not the size) box mod and tank that I hope delivers as much performance and quality as the Kangertech brand name has come to be associated with.

But, like with most box mods, they might look intimidating at first, but they end up being quite straightforward once you get to know them. The IKEN mod comes with the IKEN tank that features a “U”-shaped airflow system that draws in air from two top airflow vents and brings the air under the coil, then goes straight back up into your mouth.

I mean, isn’t that the way airflow usually works? Kangertech plays up this “U”-shaped airflow like it was the second coming of Christ, but just by reading about it, it doesn’t sound all that impressive.

The IKEN mod, however, does dumb things down just a tad by having an interchangeable power mode that lets you choose what kind of vaper you are or want to be: beginner, intermediate, and expert.

The Kit They Pack 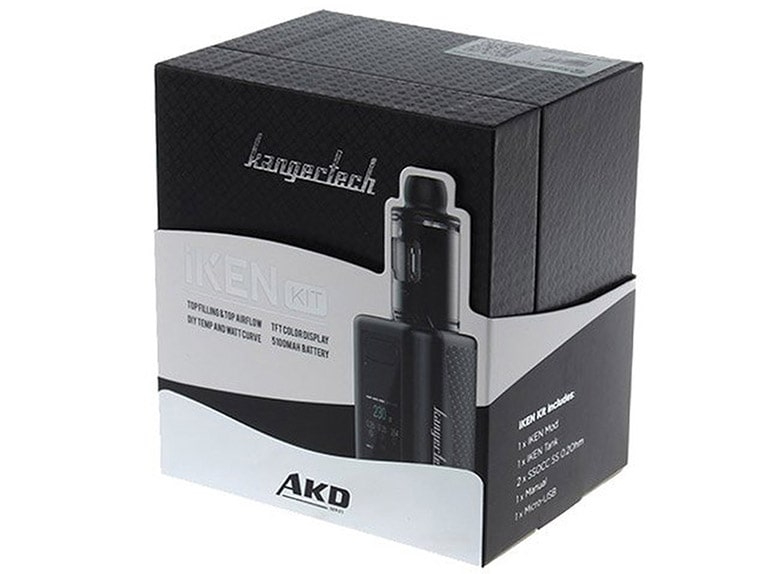 The Kangertech IKEN (not sure if it’s iKEN, Iken, or the all caps IKEN) kit includes:

All in Fashion Technology 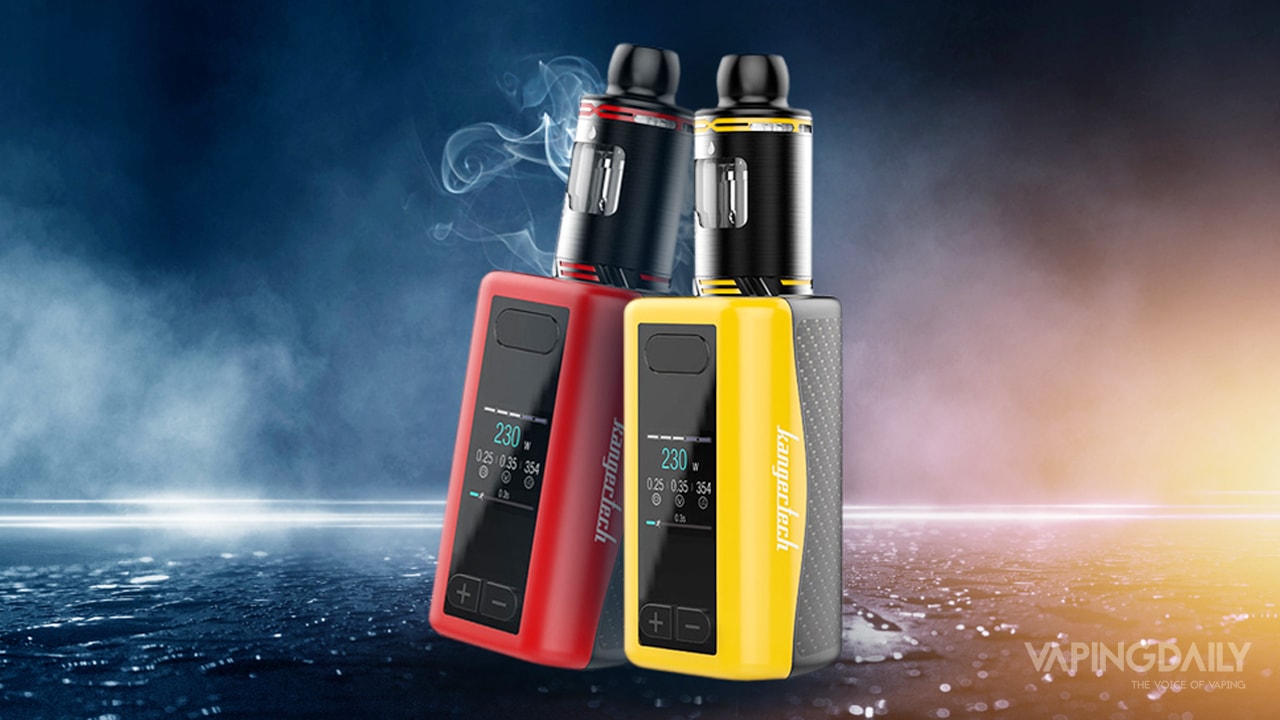 I thought the IKEN did look at little hefty at first. It has a massive, triangle-shaped body that recalls the Wismec Reuleaux and its 510 stainless steel connector pin sits right in the middle of the mod. I later realized that the 510 connection location in the center of the mod made it compatible with even the most jumbo-sized, 30 mm tanks.

But, despite its robust shape, the IKEN was surprisingly light and compact. Its shape made it easy to grasp, and despite the built-in battery, I wasn’t off-put by its weight, which was negligible. The body of the mod is made from a zinc alloy that shone bright and felt soft to the touch.

The back portion of the mod is covered by a glossy, carbon-fiber sticker plate that added some aesthetic pizazz to mod’s overall design and could be taken off and replaced with something else if you wanted.

The front portion of the mod features a 1.54 inch OLED screen that’s fantastic to look at. At first glance, I almost mistook it for a touchscreen, just based on the size of the readouts, which are crisp and legible.

But, alas, I didn’t see the selector buttons underneath the screen that are so well in-laid into the device they practically disappear, although they are easily accessible. At the top of the screen, you’ll find the equally inconspicuous firing button.

All these parts put together made for a sleek, and fashionable device, especially if you get the all-black color options (there are four other color options available). The IKEN tank looks somewhat complicated, but again, taking it all apart you see that it’s nothing to fuss over.

It has those two, non-adjustable (frowny face) airflow slits that if you believe Kangertech’s promotional materials are supposed to be on par in terms of importance to humanity as the combustion engine and the Internet.

The mouthpiece and top cap (which are one piece) are proprietary, so there’s no swapping it out; the tank also features a decent 4 ml capacity, which is not TPD compliant. The top-fill system has two opposing fill slots, which is easy enough.

But to make matters more interesting (or frustrating), the top of the tank also has two airflow slots that could easily be mistaken for fill holes; so don’t mistake them.

The Kangertech IKEN Use – A Rocket Science? 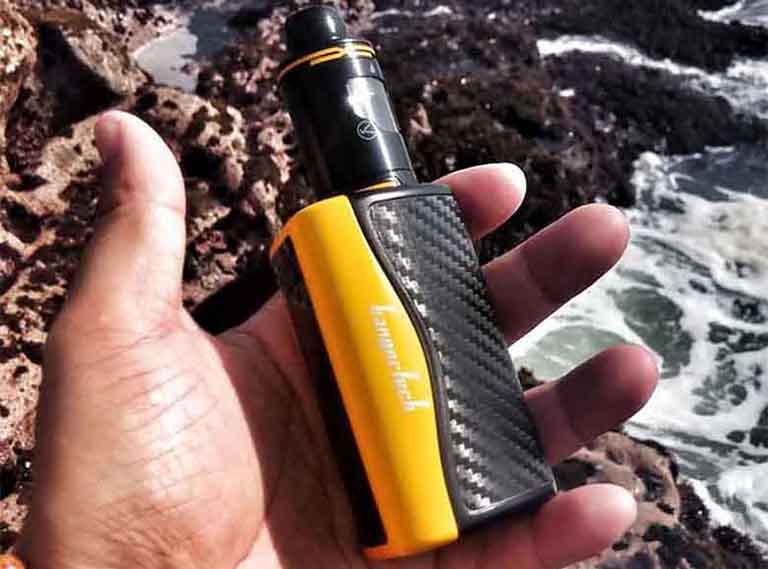 The Kangertech IKEN does keep up with the latest vaping technology out there on the market, but with its three-button operation, it’s not such a brain-scratcher (or is that “head-scratcher”). In the beginning, when you power on the device with five clicks on the firing button, you’ll be taken to the main menu that lets you choose from a beginner, intermediate, and expert setting.

The expert level is for all those vape masters out there who are well-versed in the art of the curve. “Curve” modes, if you are not already familiar, allow a user to adjust their vape session by allowing for different temperatures and wattages to be vaped with during the same session.

Imagine a roller-coaster with its dips and peaks; now, imagine you could have a vaping session similar to that. You program your mod to get to a specific temperature or wattage, hold it there for anywhere between zero and ten seconds before it goes on to the next pre-programmed setting.

That’s curve mode in a nutshell. And the Kangertech IKEN features curve mode. The IKEN also has two pre-programmable memory settings, and a max power output of 230W, although the SSOCC coils can only be vaped within a range of 25-60W, so if you are looking to test out the power output of the mod, make sure to use a compatible coil.

Vaping the IKEN – Can You?

The main menu on the Kangertech IKEN seemed like a very existential query posed to me by an inanimate object. Am I a beginner, intermediate, or expert? I don’t know. What am I? Who am I? What am I doing here? What is the meaning of life?

After I regained my composure, I settled on the expert mode, because, well, c’mon, I do this for a living. And after first being introduced to the curve frenzy by the Vaporesso Swag Kit, I found that there was no going back.

I am bereft of ideas on how much more customizable vaping with a box mod could become now that the curve has been introduced. It’s so precise and takes into account so much that I can only see a voice-activated, box mod with AI as its only potential usurper.

I call this new AI technology that will eventually turn on humanity and enslave us all, VapeNet. But, I digress.

The curve settings are completely customizable, so I won’t tell you exactly how to vape because it is entirely up to you. The curve modes on the IKEN are also compatible with the three major coil types, nickel, stainless steel, and titanium.

Even with the beginner setting, and using the IKEN tank with the SSOCC coils resulted in a satisfying vaping experience. Vaping at a minimal wattage level, say around 50W, on the coil heads still resulted in a restrictive draw with not so much cloud production (again, swap out your tank and coils, and watch this baby puke clouds).

But the flavor was great. And when you’re on the curve setting, you can even adjust for the temperature of your vapor for maximum flavor efficiency.

I like picking on SMOKTech. They’re that company that sometimes shows so much potential to create great box mods, but they more often than not fail in that respect.

So when I went looking for a comparable mod to test against the Kangertech IKEN, I settled on the SMOK R200, mostly because it could also output at least 200W and has a resistance range somewhat similar to the IKEN. No, I take that back. The IKEN can go up to 5 ohms of resistance, compared to the SMOK R200’s 3 ohms.

But, I’ll stop wasting everyone’s time and directly give it to the IKEN. Any guesses on why? Anyone? Anyone? Hint: the learning curve. Anyone? Nothing? Alright, it’s the curve settings, dummy. The IKEN is cutting-edge in its customizability, compared to the SMOK R200’s pitiable, at least these days, temperature control and variable wattage modes.

Altogether, the kit will set you back around $60, and that’s with the IKEN tank as well, which is not such a draw, but for a high-wattage device that also has curve settings, the IKEN is quite a bargain.

Kangertech sells the IKEN tank as if could walk on water, which it doesn’t, I tried, and its performance is somewhat sub-par, but thanks to that centrally-placed 510 connector pin, the IKEN mod can take anything you throw at it.

With the IKEN tank attached, the mod looks pretty slick, especially the all-black option. But the mod itself, if you want to take it up to 200W can take almost any other kind of tank, but regardless it’s still a stylish-looking device.

How The Story Ends

It’s rare that you get a starter kit that has a mismatch between the power of its mod and the capacity of the tank and coils. This is one of those rare occasions. So, I have to say, for my first outing with a device from Kangertech, I’m disappointed that they let such a flaw slip through their hands.

But, still, I was impressed with the design and zinc alloy build on the Kangertech IKEN mod. Its screen was impossibly bright and large, which made for great ease-of-use and customizability of all the vaping features. And, of course, “curve” is the word from now on.