I got to give it up to SMOK for designing their new SMOK Mag 225W box mod in the mould of the most obvious thing you should model your box mod on – a pistol-grip. It makes sense, doesn’t it? What other piece of modern machinery also needs to keep in mind the way it is held by its user, and needs to make sure that it is comfortable and portable to be carried around?

The answer to that question becomes clear once you lay your eyes on the Mag 225W. Not only is the source of SMOKTech’s inspiration evident from the product title of the Mag 225W, but again, there’s no mistaking what the designers at SMOKTech wanted to recreate with the Mag 225W.

The form of the Mag most definitely resembles the grip of a modern pistol, with the Mag’s firing button right where the trigger would be on a real gun. And taking the gun-design even further, SMOK included a unique flower-shaped mechanism right next to the trigger button that unlocks the bottom-loading battery door. 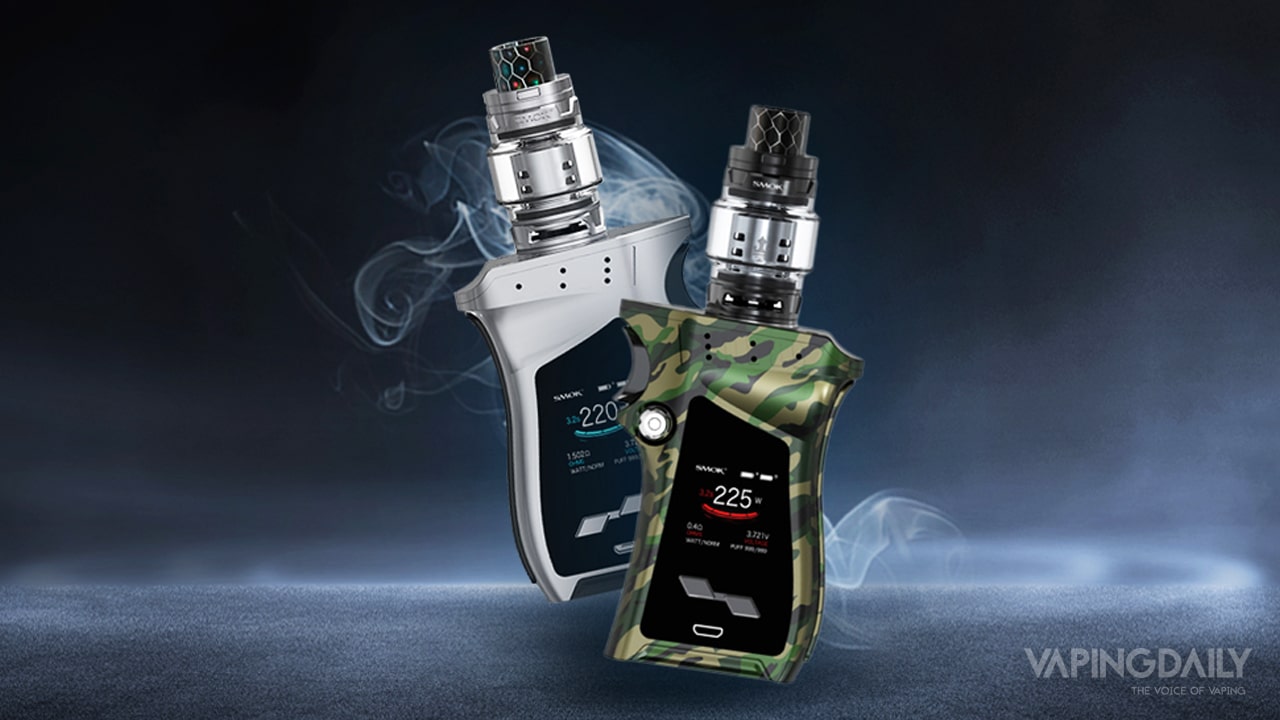 You press the button and the battery doors pop open, revealing the box where you load your two 18650 batteries into and then pop back into your SMOK mod. Similar to what? Yes, like loading the cartridge of a real gun.

The entire mod, however, is covered by a high-definition OLED screen, which I must say, SMOK has become the master of recently. Their screens and the information displayed on them are always bright and crisp.

Another area in which SMOK has proven itself of late has been in the awesomeness of their tanks and coils, and by “awesomeness” I don’t only mean how well they work, but just their real size and cloud-making potential.

The Mag, being a high-powered box mod, of course, comes with the TFV12 Prince sub-ohm tank, and two coil options that appeal to both the cloud-chaser in all of use, but also flavor fiends.

Box of the Mag

Here’s what you’ll find inside your SMOK Mag 225W kit:

Made Ready To Shoot That Vapor

It comes in at a brawny 265g, and that’s without adding the batteries or the tank. Plus the fact that the entire outer casing of the Mag is a zinc alloy, it was most assuredly going to be packing on the pounds. But the extra weight and heft of the Mag are not to its detriment.

For a machine this powerful and designed to look like a killing implement you would expect it to be a little heavier than most. The other notable feature of the Mag is the OLED screen that takes up most of the rest of the mod. SMOK usually hits it out of the park when it comes to the OLED displays that rival most HDTV’s in their clarity and brightness and that is the case with the Mag.

The 510 connection at the top of the device is spring-loaded and although its diameter measures 28mm, it can easily and comfortably accommodate a tank even 30mm in diameter. The trigger on the Mag 225W fires beautifully, and it is only one of the many gun-like features on the Mag that make it a dream to handle.

The designers at SMOKTech have displayed an astonishing amount of vigor in fine-tuning the smallest details on the Mag’s outer design. There are curves and textured grips galore. Each side of the mod features a thumb-groove so even southpaw vapers can feel at ease when holding the mod.

At the top right of the OLED screen, you’ll see the other feature of the Mag that mimics a gun – the release button for the battery box. When you press down (hard, it doesn’t release easily) on the button, the bottom-loading battery door pops open and spits out the battery clip, which then lets you install two 18650 batteries.

Embedded within the OLED screen are two up/down selector buttons, and beneath those buttons you’ll also find your USB charging port. Battery vent holes can be found along the spine of the device, as well as running underneath the 510 connection.

Now, I already reviewed the TFV12 Cloud Beast King sub-ohm tank, and the Prince version doesn’t seem to be much removed from its royal father. It does have a more substantial e-juice capacity at an enormous 8ml, which can be added to the tank if you install the separate convex glass tube that raises the capacity from 5ml to 8ml. There’s also a convenient release button on the outer part of the top cap that ensures an easier time of filling the tank. 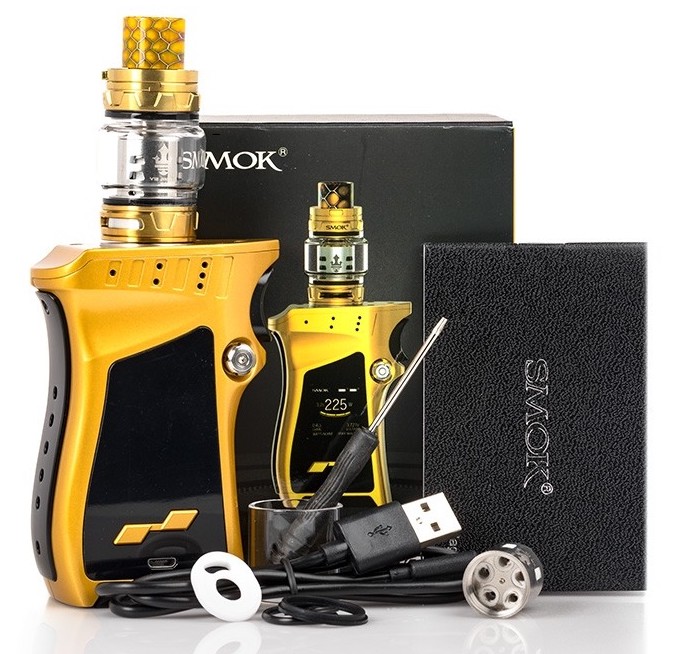 How To Fire It Up

The SMOK Mag 225W sports a new chipset in its insides only I don’t know exactly what this new chipset adds to the SMOK Mag’s bag of tricks. All the vaping and output modes are the same ones available on most other SMOK mods like temperature and wattage control, and memory mode.

So regarding vaping styles, there’s not much innovation in the SMOK Mag 225W. Apart from that, though, the SMOK does feature a very straightforward interface. The reduced amount of vaping modes inversely makes the Mag that much easier to use.

You press the firing button five times to turn the device on, and then you’ll see the main menu display on the OLED screen. The main menu reads out all your essential vaping information like wattage, coil resistance, voltage, vaping timer, and voltage.

Three additional clicks of the firing button let you access a new menu from the three vaping modes: temperature mode, wattage mode, and memory mode. And one thing I did notice about using the SMOK Mag 225W was how responsive all the buttons were. There was no waiting or holding of buttons to access a specific adjustable feature.

Bang Bang I Vaped You Down

The TFV12 Prince sub-ohm tank came installed with a V12-Q4, which was a coil option that was available with the TFV12 Cloud Beast King and it was the best coil to pair with that tank, in my opinion. I didn’t expect the performance to be that much different with the Prince version of this sub-ohm tank and it wasn’t.

I slapped on the bubble tank to the Prince to get an extra e-juice boost, and I filled it up with some Banana Cream Pie from the Vape Dudes. I left the mod in its default wattage mod, and kept the Q4 close to the top of its recommended wattage range of between 40-80W, at 70W. The flavor was awesome, and the vapor relatively warm and pleasing to taste.

Switching out the coil for the ten-coiled vaping monster, the V12-T10 coil did bring me higher up the cloud-making ladder. But since the maximum wattage output on the T10 is only 110W, it wasn’t possible to go all the way to 225W.

But, after vaping with the two stock coil options, there was no need to get to that level of power output. Both coils worked amazingly, and I got more than enough satisfaction for my taste buds as well as witnessing the birth of several cloud monsters.

The SMOK Mag 225W vs. Others: That Was Close

When it came time to make a comparison, I thought about one high-wattage device that I reviewed recently that I really liked, the Aspire Speeder. It doesn’t get all the way to 225W, but I only vaped on the SMOK Mag at close to 110W, so I wasn’t looking to make a power comparison.

The Speeder, despite its catchy title, is somewhat dour and lifeless regarding its design. It’s all-black, and colorless like it was going to a funeral. But, underneath all that seriousness, there was a serious, cloud-making device.

The A3 and A5 coils that came in the Speeder kit were some of the best coils I’ve ever had the pleasure of vaping on; they delivered amazing cloud quality, in both flavor and size. But for cloud size and cloud taste, it is hard to beat the V12-Q4.

It’s four coils, and spacious airflow slots made it a great flavor and cloud producer. And paired with the Mag’s high-wattage capabilities, the two together made sweet vaping music. This compare is a tough one, so I’m going to have to get superficial.

I liked the Aspire Speeder’s performance, but its look and design did not make me think of “speed” or a fast-moving device of any sort; I thought more of donkey’s behind. The Mag, while obviously modeled on a gun grip, is not just a “mod that looks like a gun.”

The model was the right one to follow, and the ergonomic design is beautifully done, well-detailed, and makes the Mag a perfect mod in terms of durability and functionality. The Mag wins this one just on the merits of its attractive but also utilitarian design.

What’s So Special About It

It would be easy to be put-off by the Mag’s look and design. I know I was, initially. But when I held the device in my hand, all my doubts just vanished. It made perfect sense. The grip felt great, and the zinc alloy construction gave it a reassuring heft.

I’m not a huge fan of guns (as you could probably tell). What that has to do with the SMOK Mag 225W mod kit? So, this con isn’t a “con” in the sense that it was something about the device’s performance or functionality. It’s incredibly subjective on my part, but it hit me hard enough that I felt I had to mention it.

The Mag’s build is more functional than attractive. I wouldn’t call it the greatest-looking device, but in terms of quality and knowing that the mod will last and perform well, then the Mag has that and more.

The Mag has a simple interface, and the lack of different vaping modes means there’s no confusion over finding the best modes for you and adjusting it to your specific tastes.

The SMOK Mag 225W kit is a step-up for SMOK, who’s had some notable misfires in the past. Their recent devices, however, seem to have righted their path and shone some much needed positive light on the SMOKTech brand.

I was impressed by the pistol-grip design that I thought would just be ridiculous. But the feeling was believing, and just from the first few moments of holding the mod convinced me that this was the way to go. It was a natural choice.

The OLED screen was another highlight and yet another thing that SMOKTech is always getting right. The Prince tank and the V12-Q4 coil made thick, beautiful clouds and the taste of my Banana Cream Pie was on point. 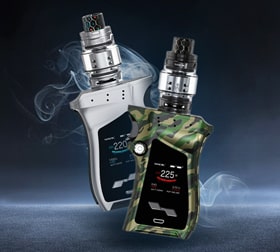