The ProColor 225 is a beautiful device that works a lot like a smartphone than a typical box mod with two 18650 removable batteries. Gone are the tiny selector buttons, and sometimes difficult to read LED readouts. And in their place, SMOK has opted for an easier to use (after some reading of the instruction manual) interface that combines a large, OLED screen on the front of the mod that offers options ranging from wattage and temperature control to adjustments you can make to display itself. 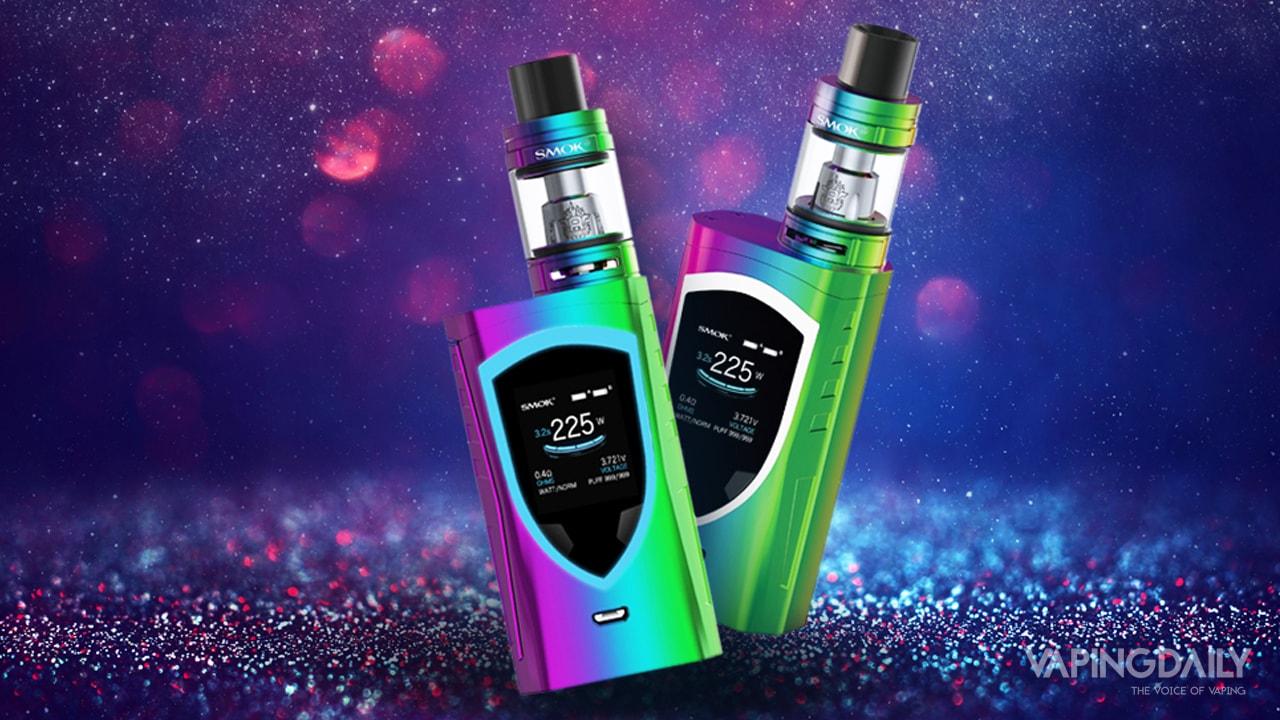 The ProColor does have more features than there are colors in the rainbow, so if you are not a fan of finding your ideal vaping settings, then the work you have to do to go through all the various options on this SMOK mod might frustrate you.

But, then again, if you do enjoy that quest to find the vaping sweet spot then the ProColor is an ideal device for you. If you’ve already tried something like the Alien, also from SMOK, the ProColor is similar, save for that new interface and the LED shield with which you control the ProColor.

The ProColor kit, (there are a standard edition and an EU edition that SMOK sells on their website) also comes with the very popular SMOK TFV 8 Big Baby Tank. The Big Baby tank continues to be a go-to option to pair with the various other mods out there.

Inside the wonderfully colorful box the ProColor comes in, you will find (standard edition):

As I mentioned up top, the ProColor functions more like a modern smartphone than most other box mods that usually have a thin OLED screen with along the side with only a few selector buttons to change only the most basic settings. There is significantly more you can do with the ProColor than with other box mods.

But first off, the ProColor is a great-looking device. It jumps out at you with vibrancy and loudness. After fiddling with the controls that oversee your vaping experience, the menu also offers options that may be a bit trite, but they do go a long way in personalizing your mod. You can adjust the frequency of the RGB backlights and also the layout of the screen itself.

And talk about personalization, the ProColor (if you buy directly from the SmokTech website) comes in eighteen (eighteen!) different colors and patterns. There is, of course, the standard wattage and temperature controls, memory settings, and switching between different coil types than most other box mods feature.

I’ve always been a fan of the Big Baby Tank mostly because of the wide-bore mouthpiece and also for the versatility of the coils that can be used with it, although the incredibly tiny fill port continues to be a thorn in my side. And this is evident by the coil options included with this kit that goes from dual coils, all the way to eight coils.

The SMOK ProColor utilizes, like the Alien, a longitudinal firing bar that runs alongside the mod, but you only need to press on the upper portion to activate the mod and to fire it. It has an overall symmetrical design that I thought was very fetching.

Of course, the OLED screen and the number of things that it enables you to do may distract you from the overall performance of the mod, but I found that it wasn’t the case since the two are directly tied to each other. Familiarizing yourself with the interface and the wide-range of possibilities can only add to your overall vaping experience rather than taking away from it.

There are nearly five different screen settings that can be used on the SMOK ProColor. These range from:

All in all, if you are already familiar with the interface used on the Alien then transitioning to the ProColor should not be that hard, but otherwise, you should do some tweaking around with the interface and manual to see what you need to do exactly so you can master the device.

I found that the various screens were not so hard to adjust, but they were just bothersome. I can appreciate a device that lets you tweak the basics of your vaping experience, like temperature and coil resistance. But the color display and RGB backlights? These options didn’t appeal to me whatsoever, and I had little interest in controlling them.

As for the more nuts-and-bolts parts of the ProColor like the tank and its connection to the mod, there were pretty standard. One thing I must mention is how the screen does intuitively warn you about certain things, like if you have screwed on the tank too tightly, which will prevent the device from working.

And of course, there are other little warnings and notifications that you can also adjust and choose with the help of the LED screen like an automatic battery cut-off and low battery warning. You can adjust between all of them using a combination of the side-bar trigger and the two selector buttons.

Shades of Vaping: Trying Out the ProColor

I used the ProColor first with the pre-installed stainless steel coils and loading the tank did prove a bother with the tiny fill port on the Big Baby. And after you did fill up the tank and attached it then came navigating the device by going through all the various adjustment and variations.

I started simply enough, just by first turning on the device with five clicks of the firing button that takes you to the main menu. From there you could directly start vaping by just setting up all the features you want. You can adjust the wattage, temperature, and voltage and then press the firing button to start vaping.

Choke, choke. As Ric Flair used to say, “Wooo!”. There was some serious vapor coming off of the ProColor. I swung the airflow valves on the bottom of the tank wide-open, as I usually do, and the mouth-to-lung hit was superb. I counted my vapor trail lasted at least five seconds when I exhaled.

And then, I decided it was time to take this baby for a real test drive. I switched out the dual coils for the octupole coils, which have a resistance of 0.15ohms. I set the wattage to over 60W and went for a temperature of 450F.

I held the firing button, inhaled from the beautiful, wide-bore mouthpiece, and everything else in the room just disappeared behind an all-consuming, white, poltergeist of vapor that left me momentarily feeling like I was in one of those sensory deprivation tanks.

Serious cloud. The flavor was another story. I was using Maui Sunrise from Mt. Baker, and I wasn’t impressed by the lack of different flavor notes. I switched back to the dual coils and set the wattage lower. Only I wasn’t as pleased as I would have been with a lower wattage device that had a closer to above ohm resistance on its coils.

The ProColor Among Other Mods

The ProColor has a lot of similarities with its older brother the Alien, but I don’t think it fair to compare the two, mostly because they are from the same company. I decided to pair the ProColor against the Innokin Coolfire IV TC100 since it has a comparable power output and other adjustable features. 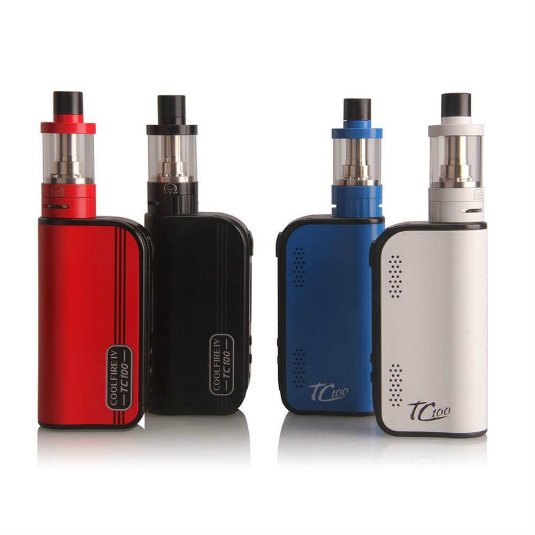 But the Coolfire IV TC100 doesn’t feature that funky OLED screen and so many of those other features that set the ProColor apart. Only those things that the ProColor that are supposed to set it apart, I don’t care for anyway. I liked the simplicity (at least for a box mod) that the Coolfire afforded me along with the consistent flavor and cloud production.

The ProColor does have that Big Baby tank I do love though and those two different coils that went way beyond sub ohm to deliver humongous clouds. This is a tough one. The screen and options on the ProColor are distracting and boring, quite frankly, but the device still performs well. So, for that characteristic alone, the vapor production, I give it to the ProColor.

I said it from the outset, the ProColor fulfills the promise of its name and explodes with color and vibrancy. And with over eighteen different color schemes to choose from, there is no shortage of colors to please any and all kind of vapers.

Yes, the customizability on the ProColor is both a pro and a con. The range of things you can personalize on the ProColor is ample, but some of them are only for the ProColor itself and have no effect whatsoever on what you plunk down $60 for, namely, vaping. I found them to be unnecessary and tiresome.

While the OLED screen held, I think, too many options to tweak and change, just holding the ProColor like you would with a smartphone I thought was a novel way of updating the device and was enough to set it apart from other box mods.

225W? Really? I can understand how sometimes you might need an extra kick above 40W, but 225W? That just seems like overkill.

There’s no shortage of customizable features on the ProColor. There are the standard options like TC and variable wattage settings, right down to how the backlights flash. There is so much you can do to personalize the device you might forget to vape with it.

Wrapping Up The Whole Thing

The ProColor started off well, but then, as I got bogged down by the endless series of customizable options, I just gave up. Again, if you like that sort of thing, then the ProColor would be right up your alley.

Regarding portability, I wouldn’t necessarily call it the most portable device. It’s probably more of an at-home device. And the power options, while ample, didn’t seem to reflect my ideal vaping levels, as it pushed the envelope too far and unnecessarily.

It is, however, a very well-made device. The inclusion of the Big Baby Tank was a coup, along with the two coil types that provided variation, although the flavor was not as rich as I would have preferred to have it.