I’ve done three KandyPens devices today, and not one of them spoke to me on an aesthetic level, which is rare for KandyPens. And now, last but certainly not least, comes the KandyPens Ice Cream Man.

The title alone was enough to summon up images of summer immediately: sun-soaked afternoons, quiet suburban streets, and water sprinklers chasing away the heat. I also pictured a device bursting with loud colors, and I was not disappointed.

The Ice Cream Man comes in nine color varieties, and each of them works well in their own capacity. Each model, regardless of color, has a rubber-satin finish that’s great for your grip and makes the ICM comfortable to hold.

And the rest of the design elements are minimal, which is great since the whole look of the vape pen is rounded out with small accents, like the white trim, and the “K” KandyPens logo that is also the firing button. But apart from the exterior, the internals of the Ice Cream Man, don’t stretch far into innovative territory.

The heating chamber consists of the usual dual-coil atomizer, with titanium coils wrapped around two quartz heating rods. The battery on the ICM is decent enough and endows the pen with three separate temperature settings.

What’s In the Carry Case 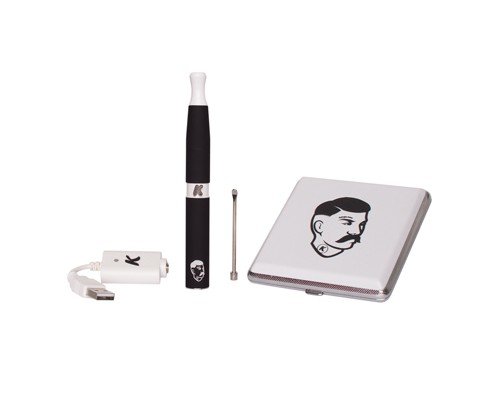 The Ice Cream Man looks a lot like similar KandyPens devices, like the Galaxy and Elite. And with that said, you begin to wonder what exactly was the motivation behind creating and making a device like the Ice Cream Man. 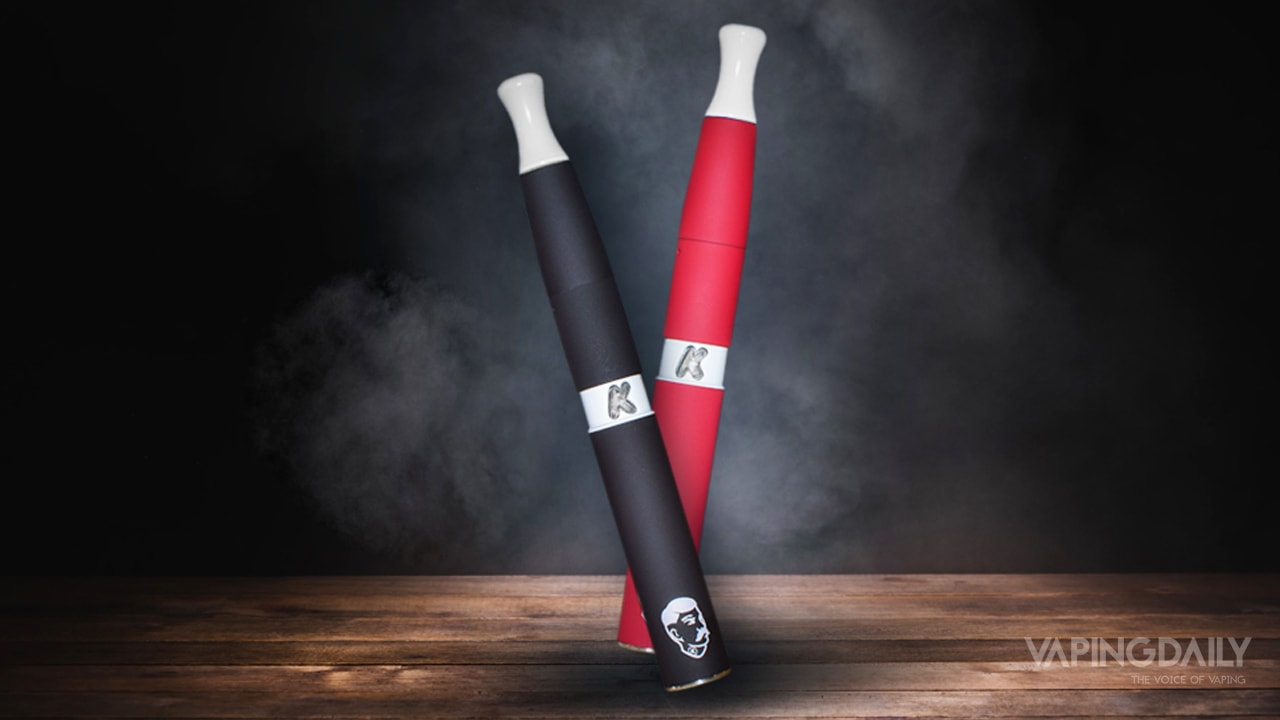 It has a great finish to it, with the soft, rubber coating. The device functions like your typical eGo threaded vape pen so the battery and atomizer can be switched out should you so desire. The center firing button/logo along with the bottom KandyPens logo light up when vaping, so that’s where its innovation tops out at.

The chamber is supposed to be more profound than most, but this can be a good and bad thing, especially with waxes and concentrates. Most veteran wax vapers know that only a little bit of dab is needed for excellent results. So, a vape pen with a full chamber doesn’t impress necessarily.

The mouthpiece on the Ice Cream Man features something called Air Carb technology. I suppose this is just a fancy way to say “airflow holes.” The mouthpiece can be screwed off and has a few slots around its opening that you can cover with your fingers or leave open if you want to allow more air into your vapor path.

The Ice Cream Man primarily dazzles the eyes, and holding it in your hand makes for a relaxed, and natural fit. The kit comes with only one coil option – the pre-installed dual rods – and the temperature settings number just three.

What To Begin With

The mouthpiece can be screwed off separately, but the top part gets removed to reveal the heating chamber inside. You plop down a little dab onto the coils and close it back up again. A full charge required a little more than a full hour for the Ice Cream Man, and the battery let it operate for at least a whole day.

You turn on the Ice Cream Man by clicking the “K” logo five times. You cycle through the three heat settings by clicking the logo another three times. Once you have settled on your preferred temperature (red=350F, green=390F, blue=430F), you just press the firing button again and start to vape.

The device did not require any heat-up time, which was great, but also typical of most coil-like devices. The material I put in there vaporized immediately, and the draw was spectacular. I left the airflow holes open and closed, and I felt differences between the two, with open air holes resulting in easier draws, while the closed holes gave off a more restricted, direct-lung hit.

I started off at the highest temperature since with dry herbs and waxes, at least, I prefer very thick, intense clouds. The lower temperatures did not lead to a decrease in either vapor size or quality; they just took less time to get hot and start vaping.

I didn’t take advantage of the wider chamber and filled my device with only a tiny amount of dab.

Comparing the Ice Cream Man with…

I don’t usually like to pit one brand against itself, but I was curious about how the Ice Cream Man would fare against a brand-mate, like the KandyPens Donuts. I liked the KandyPens Donuts; it was one of the first KandyPens devices that I reviewed, and I’ve found it still holds up after repeated use. 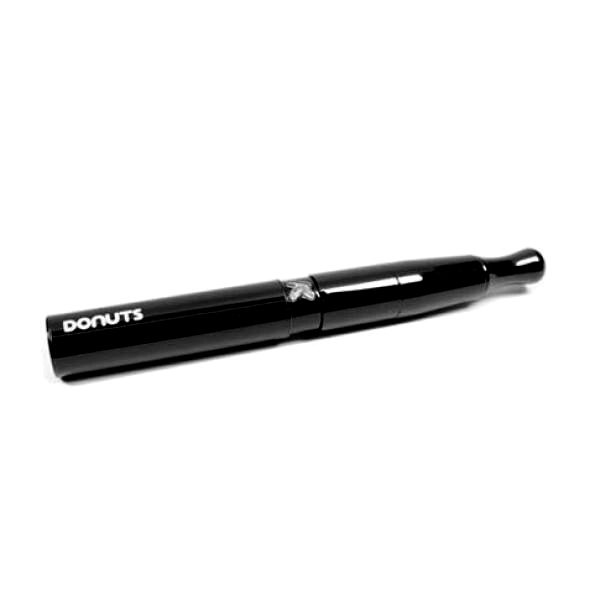 The Ice Cream Man and Donuts are very similar in both design and performance (not to mention the food-themed names). The one big difference between both devices is their heating elements: the Ice Cream Man uses coils, while the Donuts has its ceramic heating disc that slowly melts and then vaporizes waxes and concentrates.

So the Ice Cream Man quickly melts its material and gives off huge, succulent clouds, whereas the Donuts, with its built-in Slo-Burn technology, takes a while to heat material evenly, and produces smoother, flavorful hits.

I should have known that comparing two devices from the same company usually results in a tie, and this looks like where it is headed. Besides the finish, there’s not much to separate the two devices. But I’ll give it to the Donuts, for ol’ time sake, and also because of that Slo-Burn heating donut.

I finally got a beautiful-looking KandyPens device. Although the Elite certainly does take the crown for the better-looking of the two, I liked the pastel colors, and location of the two LED lights on the firing button and at the bottom of the device.

The titanium coils and the quartz rods are always an excellent combination. They ensure speedy vaporization and almost instant cloud production.

It took this long to get the KandyPens Ice Cream Man main attractive feature, and that is that it is a more budget-friendly device, compared to the Elite or Galaxy that would probably run you double the price.

The KandyPens Ice Cream Man was an underwhelming entry into the KandyPens stable. It didn’t do anything a lot of other devices can do, and not just from KandyPens.

The coils and atomizer were standard and worked well. The shape and looks of the Ice Cream Man left nothing to be desired since I was salivating on when I would next lay my eyes on a colorful confection from KandyPens.

But after such success with the Prism, the Ice Cream Man did not live up to its predecessor’s greatness. The Ice Cream Man vaped well enough, and the hard-shell carrying case was a nice add-on (although a bit too specific to a well-known, international youth subculture that rhymes with “kipster” for my tastes).

I felt there should have been more added to make the Ice Cream Man a real treat.