Griffin RTA Review: A New Kid on the RTA Block

The Griffin RTA is a new addition to the RTA game that comes to us from Geek Vapes. Geek Vapes is a relatively new company that is fast gaining traction as one of the more cutting-edge vape companies with their impressive line of box and mech mods.

The Griffin RTA shares its name with a mythical creature, a half-lion, a half-eagle beast that was said to be a king among all monsters and the guardian of priceless artifacts. So while this RTA doesn’t necessarily need to live up to its namesake, I am interested in seeing how it performs.

Here are some of the more interesting specs on the Griffin RTA:

The packaging of the Griffin RTA was something that stood out. The box cover had a black background that emphasized the metallic finish of the Griffin, which was written out in a classically-styled font.

After removing the cellophane wrapping here’s what I found inside:

I think the first thing that struck me about the Griffin RTA was its height. It is surprisingly tall at close to 60mm with the mouthpiece attached. But the height of the atomizer can also be attributed to the e-juice capacity that sits at 3.5ml, which is somewhere in the middle when it comes to tank capacity.

A proprietary mouthpiece comes already attached to the tank and can be removed and replaced with the 510 drip tip adapter included in the kit, which was considerate of the folks at Geek Vape. The Griffin being a top-fill tank when you unscrew the top cap you see two rather large fill holes so filling the beast doesn’t present much of a problem.

All these disparate pieces come off to reveal the build deck, which is, by itself, an impressive piece of hardware. It is a Velocity-style deck, so it has two posts spaced about 6mm apart with two post-holes in each post. The Griffin RTA has a reputation for being one of the more natural tanks to build on and taking a closer look at the machining I can see why.

The posts are spaced apart just enough to make mounting your coils a breeze, and that extra height is also a contributing factor to making the Griffin RTA a great tank to build on. The wicking holes (four of them are placed around the base of the deck) are also easily found and accessible.

There is a separate metallic ring that you need to take off first before building on the deck and which then keeps your cotton (or whatever wicking material you choose) in place. On the base of the tank, you’ll also find two 12mm adjustable airflow vents, as well as dedicated airflow holes for coils, right underneath post-holes.

The housing where you place the Velocity-deck once you’ve finished mounting and wicking your coils is made of stainless steel and is emblazoned with a beautiful engraving of what else? A Griffin. There are also four independent juice flow holes in the chimney that let you adjust just how saturated your wicks get after you fill the tank with e-juice.

Building on the Griffin RTA

Just for all you beginners out there, always remember to have a few things on hand before you begin to build on an RTA or RDA:

And no matter how easy someone (yours truly, included) says it is easy to build on a particular RTA or RDA, make sure you understand and know all there is to know about conductivity, ohm’s laws, and electricity in general.

With that out of the way, I built my coils with 28g twisted stainless steel and using about six wraps in total, and you could, of course, use another material for a second coil, but I decided to keep it simple today and stick only with a single material.

I haven’t yet gotten out of my comfort zone with organic cotton enough to try any other wicking material. I just like the flavor, the easy saturation and the durability of cotton, and also because it’s easily malleable.

With the Velocity-style posts, it’s always a good idea to unscrew the grub screws that keep the coils in place to give you some extra room to work with, which is what I did. The four wicking holes took my cotton strands easily enough, and I made sure not to overstuff the holes, while not making the strands too thin that they would come out.

With my build done, I was ready to vape with the Griffin RTA.

I attached the Griffin to a simple SMOK Mini box mod, but before I did, I checked to see by how many ohms my coils could resist, and I found that they were sitting at a decent 0.25ohms. So setting my SMOK Mini to 60W, I started my vape.

There was negligible resistance thanks to the wide-open airflow valves on the bottom, but with the addition of the juice-flow holes in the chimney, it was tricky to find a good combination to get a great-tasting vape and decent cloud production. But, since clouds aren’t my thing, strictly based on the flavor I was getting, the Griffin performed superbly.

The Smoant Mobula was the closest other RTA I could think of when it came time to compare the Griffin RTA to something else, since they both feature Velocity-style decks, and, well, there is a lot the two tanks have in common, besides that.

They are both made of stainless steel; they can both accommodate dual coils; they both have adjustable air and juice flow holes, and they stand at relatively the same height at 60mm. So you can see that this is going to be a tight race.

I would like to say that they are both great performing devices, but, I know this seems trite, I would have to give the edge to Mobula simply for its larger e-juice capacity that is almost double the Griffin’s, at a whopping 6ml.

I know the Velocity-deck is the entry-level deck for new builders, but I still admire its (relative) ease of use and that you can completely remove or rebuild your coils and wicks in under ten minutes (experience necessary).

Airflow is one thing, and a feature like that is something important to have, but adjustable juice flow is also something that can only lead to an even better vaping experience. And it did.

The combination of dual stainless steel coils and cotton wicks made for an extremely pleasing flavor experience on the Griffin RTA.

I know this might seem like a strange con to assign to an RTA, but the geeks over at Geek Vape have already come out with a better RTA in the Zeus, which, unfortunately, outperforms the Griffin in many ways. So, not the Griffin’s fault, but that’s the nature of the game.

The Griffin RTA lived up to most of my expectations. It was an easy-to-use, easy to disassemble tank that performed well, and had a lot of great features.

The inclusion of a 510 drip tip adapter meant that you weren’t stuck with the factory installed mouthpiece and the juice flow holes made for an even more customizable vaping experience.

It was too bad then that the Griffin RTA was overtaken in performance and durability by its other mythologically inspired brother, the Zeus tank that did rule over the Griffin. 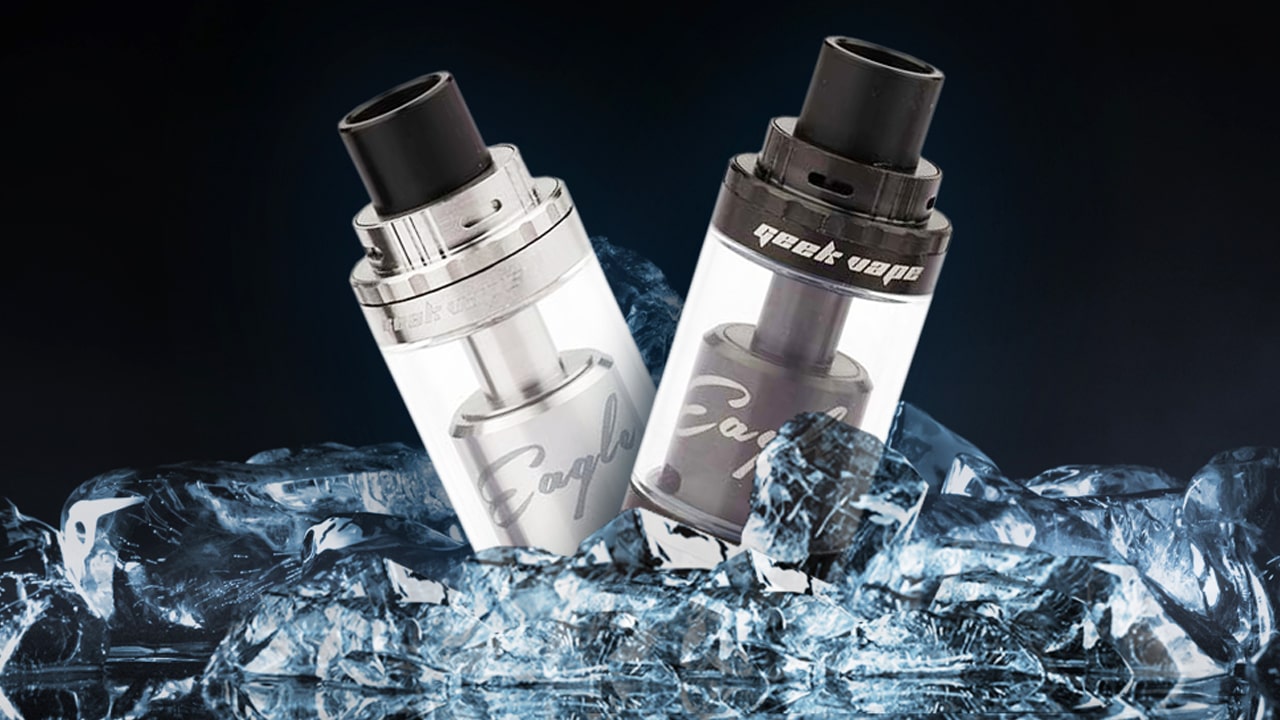 May 25, 2017
The GeekVape Eagle sub-ohm tank and RTA may look like the Griffin 25 RTA, but it is a totally different beast. Is it because of the coils? Read to find out.