GeekVape is a company that is notorious for pushing the boundaries of how they build atomizers. Furthermore, because of that, it came up with some of the most innovative RDAs and RTAs ever. The Griffin 25 RTA is one of the most popular atomizers that came out of GeekVape. As a result, it redefined the way vapers looked at RTAs. Because of the Griffin’s popularity, GeekVape decided to make a follow-up that will cater to a niche type of vaper. It is for vapers who wants to use exotic coil builds but does not have the skills to make them themselves. Consequently, it came up with the GeekVape Eagle hybrid sub-ohm tank RTA.

Looking at the GeekVape Eagle RTA, it looks identical to the Griffin 25. They both have the same design and dimensions, just different brandings. However, you want to see what makes the Eagle different from the Griffin. What sets it apart from all of the other atomizers that Geek Vape released before it? Then, you have to dive down into the coil heads it uses.

First, we need to go into the box and learn a bit more about it. This is before we get into the nitty-gritty parts that make the Eagle hybrid sub-ohm tank special. 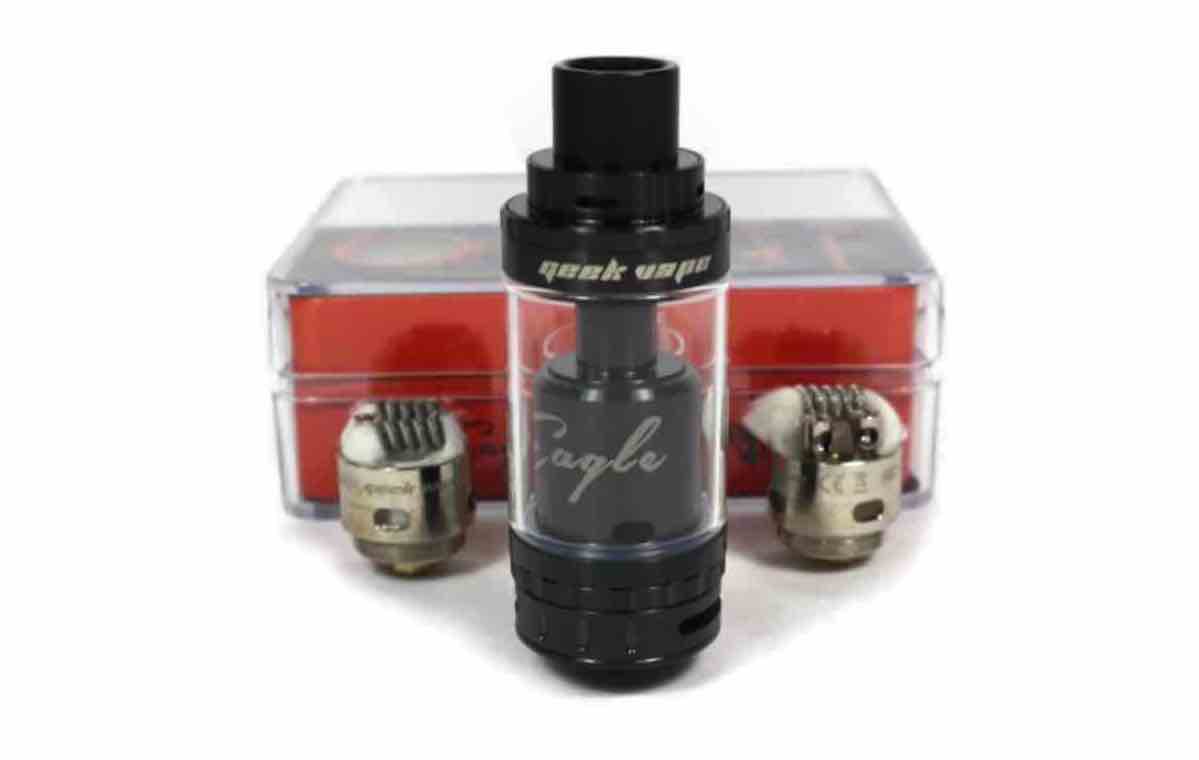 The Look and Feel of the Eagle Sub-ohm Tank

As mentioned earlier, the GeekVape Eagle sub-ohm tank is identical to the Griffin 25 RTA, at least from the outside. GeekVape markets the Eagle (and the Griffin) as 25mm tanks. However, the base of the atomizer is actually 24mm at the base. Then, it swells up to 25mm from the AFC ring to the tank section. The top airflow version of the Eagle sub-ohm tank is 64.4mm from the base to the top of the included wide bore drip tip. Meanwhile, the bottom airflow only version is 58.5mm. 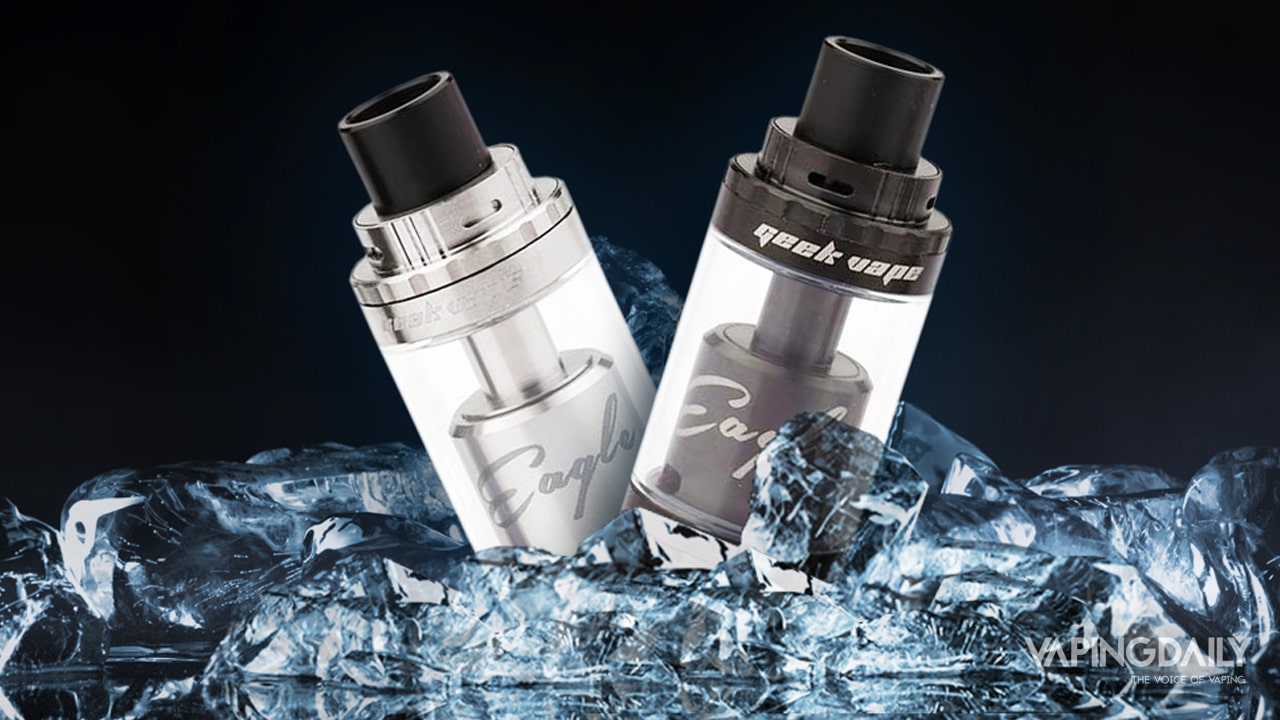 You might think that the juice capacity of both versions is the same. On the contrary. In fact, the top and bottom airflow version actually holds less vapor juice than the standard. This is because it has a larger diameter shaft section. This is to accommodate the top airflow feature. 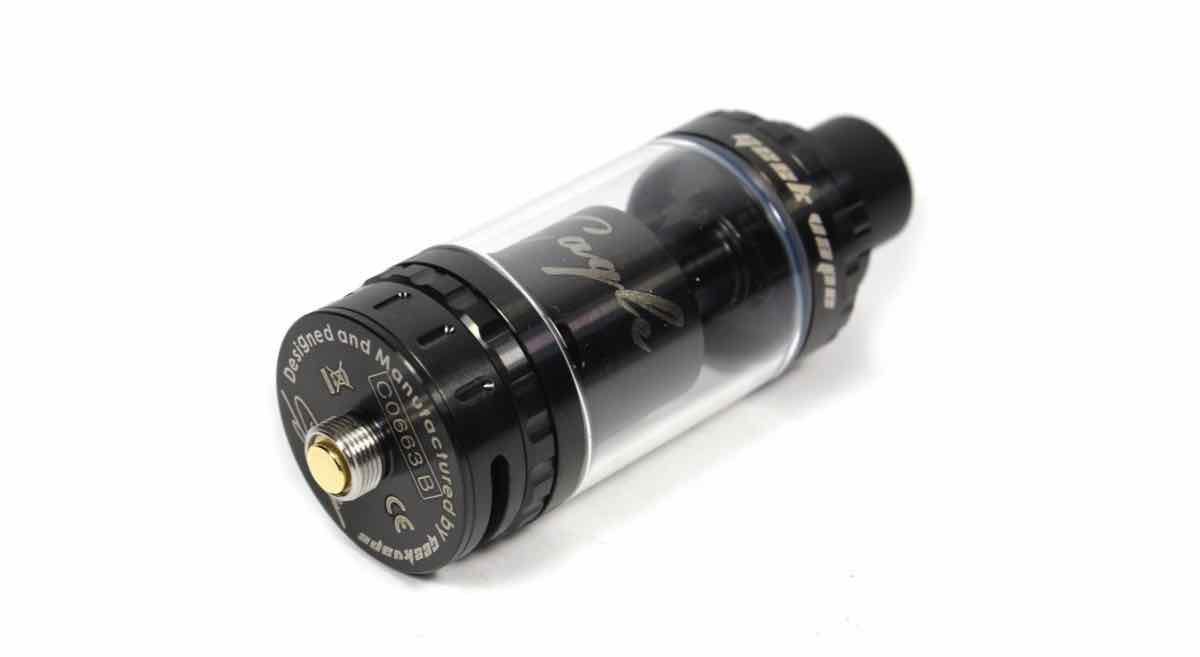 Just like the Griffin RTA, the Eagle sub-ohm tank has impeccable machining quality. There are no burrs or sharp edges on the threads, the aluminum parts are thick and beefy. In addition, the black finish does not chip or scratch easily. Even the crafting of the HBC coils are good. They wrapped the wires nicely, and they have just the right amount of cotton wicking (more on the HBC coils later). Overall, the build quality of the GeekVape Eagle sub-ohm tank is at par with the rest of Geek Vapes products. They are actually all quite high-quality.

The standard, bottom only airflow version of the Eagle sub-ohm tank is actually pretty airy on its own. When you open the bottom airflow all the way, I get a nice, slightly restricted lung hit. On the other hand, on the dual airflow version, the draw becomes quite loose. This happens when both airflow controls are fully open. It feels that you are just breathing out of a straw. There is no restrictiveness whatsoever, which makes it perfect for cloud chasing. Now, you may be wondering if the additional top airflow would kill the flavor of the vape. However, it won’t because the air from the top actually travels down the shaft and hits the coils from above.

Diving Down on the HBC Coils

The drop in coils that go with the GeekVape Eagle sub-ohm tank is quite different from your usual pre-built coils. This is in the sense that they look similar to RTA deck sections that come with other sub-ohm tanks. Then again, they aren’t made completely out of stainless steel. The HBCs (hand build coils) are basically two post build decks where the posts sit on top of a ceramic base. The coils are already pre-installed and pre-wicked. Furthermore, the best thing about them is that they are unlike standard sub-ohm coils. In fact, you can re-wick your HBCs and use them repeatedly until the coils themselves burn out.

You can buy additional HBCs in packs of two, and they come in different configurations, like the:

To clean all of the coils, you will need to dry-burn and re-wick it, which is pretty much the same as regular RTA decks. Although the Eagle sub-ohm tanks do not come with an Allen key, you can technically remove the pre-installed coils. After that, you can install your own if you know how to. However, the decks that come with the HBC coils are not as sturdy as your regular RTA decks. They are quite cheap as well ($10 for a pack of two coils). This way, it would be better to just buy new coils when the ones that came with the GeekVape Eagle are pretty much used up.

My Vaping Experience With the Eagle Sub-ohm Tank

There is nothing much to say about installing the new coils in the Eagle sub-ohm tank. You just need to unscrew the base, screw in the HBC coils into it. Then, you will prime the coils before screwing it back into the tank. As I mentioned earlier, it is possible to rebuild the coils on the HBCs. But, the posts are only screwed in place on the ceramic deck, so they are somewhat loose and may come off after some time. Re-wicking the coils is easy though. 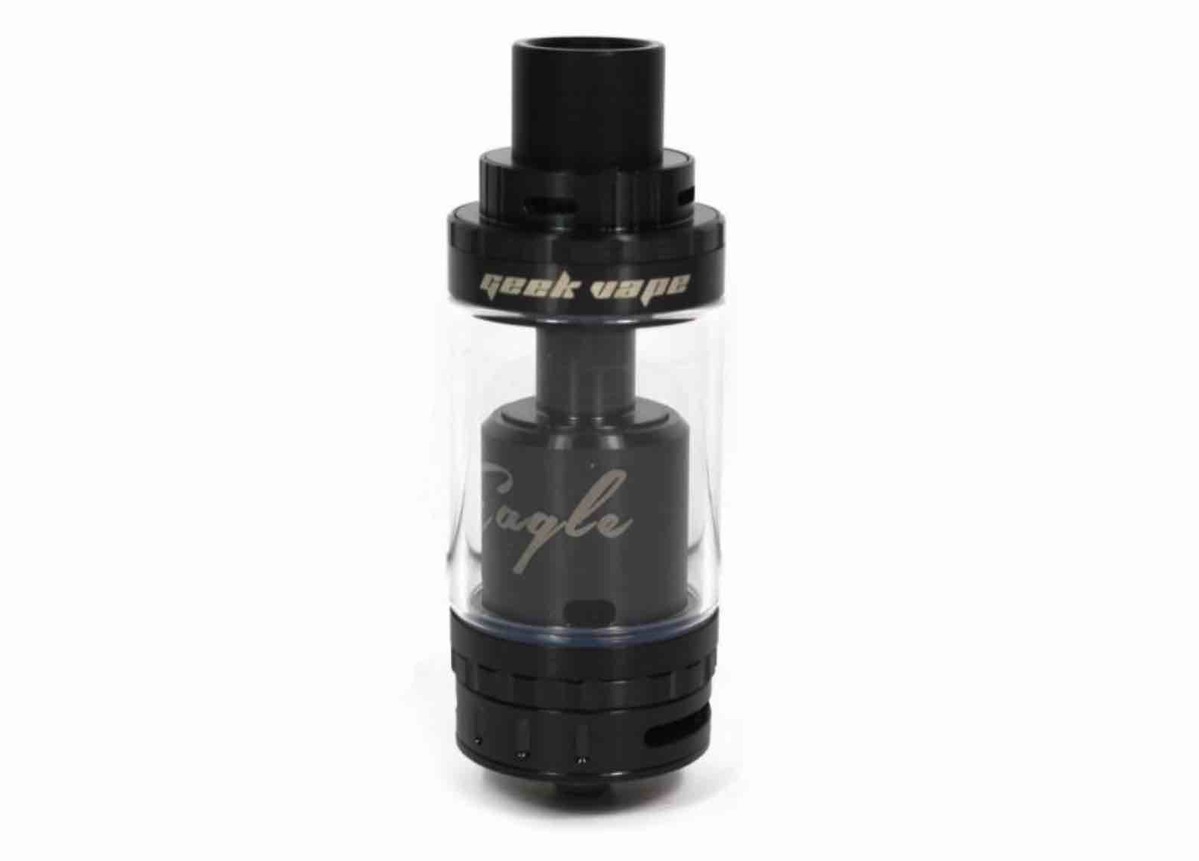 You can remove the old cotton, dry burn and rinse the coils, and then insert new cotton wicks. Be mindful where you place the ends of the wicks. It is because they need to cover up the juice holes at the bottom of the ceramic deck. Therefore, if you don’t do this properly the tank will leak.

Just like the Griffin 25, cleaning the Eagle sub-ohm tank is a breeze. I just disassembled the tank and popped them inside my ultrasonic cleaner and I’m done. You can also just rinse all the parts in clean, filtered water. Then, you can dry them off completely before assembling them back together. The coils themselves do last a significantly long time. I used the same coil that came with the tank for at least two and a half weeks before I had to replace it with a new one.

I used the top and bottom airflow version of the GeekVape Eagle sub-ohm tank. Let me tell you, it performed quite well, well above average in my opinion. It may not be the best in terms of flavor, but you can still get some decent clouds with it. I like restricted direct lung hits. Therefore, I would close off the top airflow completely and close the bottom AFC ring by one or two clicks. Although it is possible to re-wick the HBCs. However, figuring out the right amount of cotton and where to place the ends will be quite a challenge. In fact, I did experience some leaking problems at the beginning.

I have mixed feelings about the GeekVape Eagle sub-ohm tank. I love that it caters to beginners who want to experience vaping on exotic coil builds. Alternatively, the quality of the HBC decks does need quite a lot of improvement in build quality. Some users complain about the coils being unevenly spaced and non-uniform. The truth is, that’s the thing with hand built coils, it is almost impossible to build them uniformly every time. I did enjoy using the Eagle sub-ohm tank because it can definitely chuck thick clouds. At the same time, the flavor I get out of it is quite nice. Now, would I recommend this tank to beginners? Yes, but I do have to caution you about using the right amount of cotton for re-wicking.