I was about to get all righteously indignant at the site of the new Innokin Pocketmod starter kit that is conspicuously shaped like a lipstick tube. I thought I would have to start this review with a long screed against gender stereotypes and gender equality and all those wonderful things.It is a dependable, and well-performing starter kit.

But the more I checked out the Innokin Pocketmod I realized my opening salvo in the gender wars would not be necessary. Unlike the similarly-shaped and designed Lady Q from Artery that strove to appeal to a particular stereotype of women, the Innokin Pocketmod has no other intentions than to be an excellent and portable vaping device. 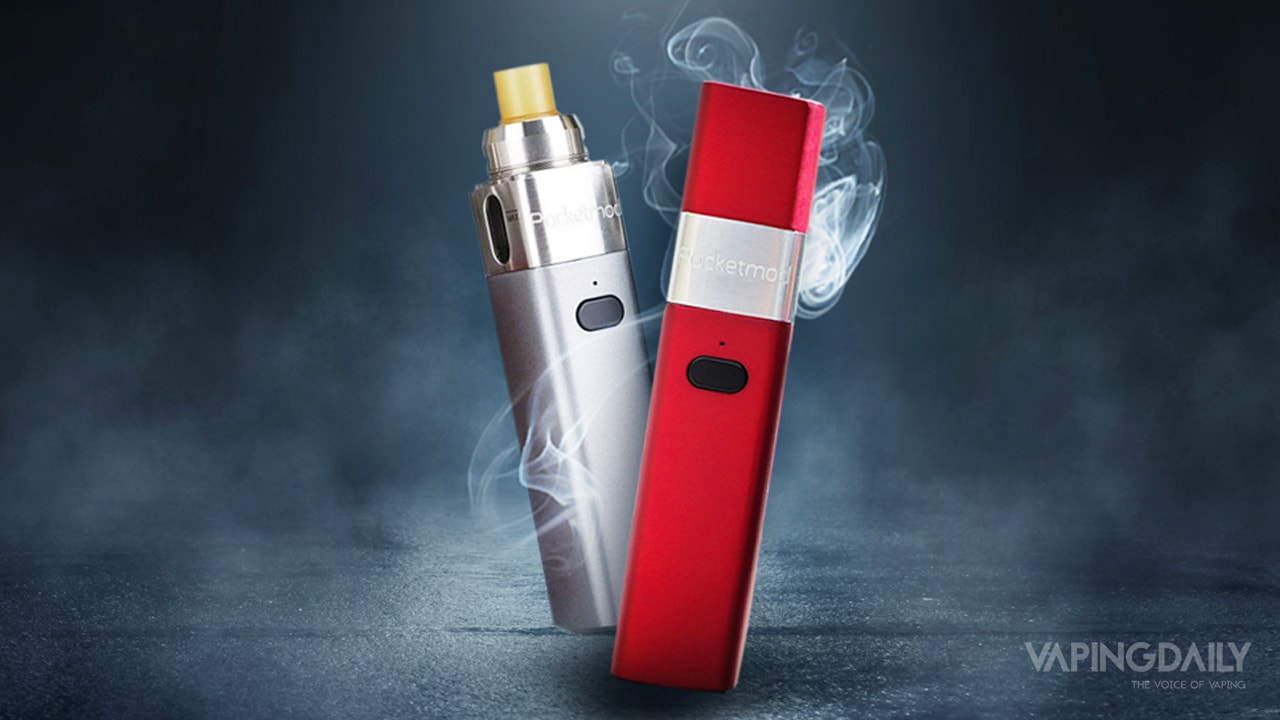 The Pocketmod’s shape and design do recall a somewhat bulbous lipstick tube, but that’s more a product of the demands of making a small, compact device than designing something along gender lines.

The twist-off top cap also pushes the Pocketmod to be interpreted as a device “for the ladies.” But again, that decision seemed like it was made to optimize the mod’s portability than to try and pander to women.

Inside the Pocketmod you’ll find a substantial 2000mAh built-in battery charged through a USB charging port. Taking off the top cover reveals the best parts about the Pocketmod, namely its internal 2ml tank, and the atomizer base to which you can attach a spare 1.5ohm coil if you want a change from the pre-installed 0.35ohm coil. 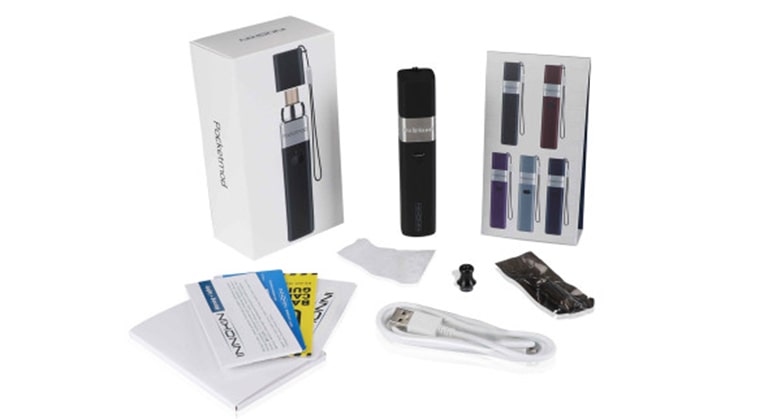 Innokin chose to replicate the book-like packaging they created for their Innokin iTaste Oceanus for the Pocketmod. When you finally do open up your Innokin Pocketmod starter kit, here’s what you’ll find:

The Innokin Pocketmod: The First Look

When you think about it (and I do) trying to replicate the compactness and portability that make-up accessories have mastered is not entirely a bad idea. Why do you think that a compact is called a “compact”?

I think the Innokin designers that worked on the Pocketmod followed that same line of reasoning; it just makes sense. But, luckily, the designers only replicated the better parts of makeup containers like protecting the internal components from dust, dirt and other impurities, as well as making the entirety of the device quite easy to handle.

I’ve already talked about the top cap, but one thing I didn’t mention is the small opening on the bottom of the top cap to which you can thread through the Lanyard included in the kit. The top cap protects the mouthpiece, which can fit any 510 drip tip, and airflow vents, but the rest of the mod’s body is also well-built. The finish on the Pocketmod has a rubberized coating to it that is great for holding and preventing slip-ups.

The shape and size of the Pocketmod also add to its portability and overall aesthetic. The Pocketmod is perfectly square, which works to its advantage since it makes the mod blend in and renders it virtually inconspicuous.

Beneath the top cap is a center, metal-finish section that bears the Pocketmod logo. But on either side of this metal, mid-section two viewing windows let you gauge your e-juice level and also has a small fill line to make sure you don’t overfill.

Right underneath the mid-section, you’ll find the responsive and rubberized firing/power button, along with a pin-hole size LED indicator light. Once you remove the top cap, which you do by applying a little pressure with your thumb to snap it off, you’ll find the removable mouthpiece and also be able to access the internal tank.

The Innokin Pocketmod: Up Close 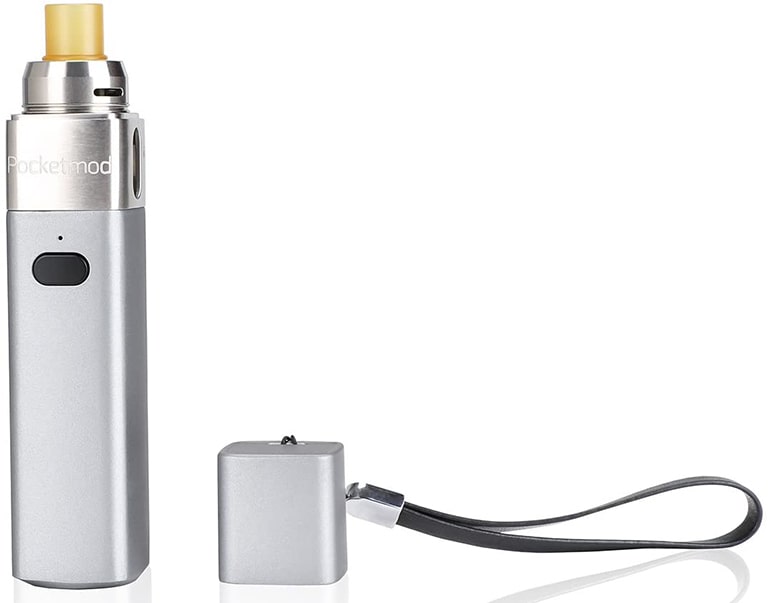 With a device as simple and easy-to-use as the Pocketmod, you don’t need much knowledge or experience to start using it. There’s no need for a screen or multiple button combinations; the only real adjustments you can make on the Pocketmod are made through either switching out the atomizers or adjusting the airflow with the symmetrical airflow ring.

Filling up the e-juice tank should be as easier on every other vaping device as it is with the Pocketmod. The top cap, the mouthpiece, and the atomizer base all get screwed off, which reveals the wide-open top of the tank that you could not miss even if you were filling your tank from outer space.

Leaking would be a concern with a device that has such a wide-open top with an atomizer that has bottom airflow vents, but that snap-on top cap was perfect to protect against any leaking. So long as you stay under the max fill line, then you should be fine.

The Innokin Pocketmod: The Vape 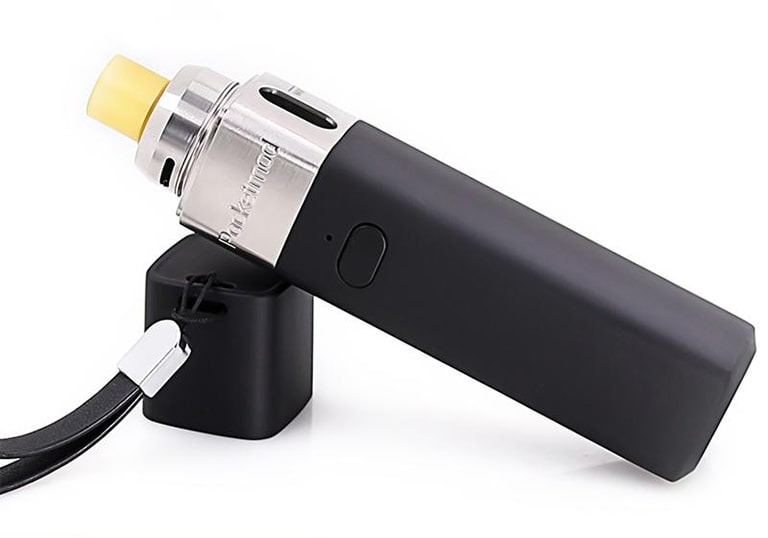 The Innokin Pocketmod takes very little preparation to start vaping. It’s a lock-and-load type of device. I filled the tank with another glorious confection from one of my favorite e-juice producers, the Vape Dudes, Cookies and Cream, which is also a favorite flavor of mine in other media like ice cream and chocolate, but I digress.

I went with the no nicotine option and an even 50/50 split between PG/VG. The ramp-up time between firing the device and inhaling vapor was minimal but still evident. On the second or third inhale, however, the flavor was distinct, sharp and pleasant. The cloud cover was also heavy given the 0.35ohm atomizer inside.

But the flavor profile with the 1.5ohm coil was so wickedly vivid that it produced a Proustian moment in me, as, with every successive vape, I recalled all the times my mother bought me Cookies and Cream ice cream at Baskin & Robbins when I was a kid. Excuse me; I have something in my eye.

The Innokin Pocketmod vs. The Artery Lady Q

All I remember about my review of the Artery Lady Q was lambasting its poorly thought-out design concept, but reading through the review again, I saw that there were a lot of things to like about the Lady Q that I may have overlooked.

The recessible tank along with the heat-sensitive (to prevent accidental misfires), touch firing button were great things to include on any portable, sub-ohm mod. The Lady Q did try to purposefully mimic a lipstick tube with the choice of its glossy, aluminum alloy finish but it was still a well-built device.

But, I think I will ultimately give this decision to the Innokin Pocketmod. My conclusion is not only based on the Pocketmod’s gender-neutral design aesthetic but mostly for the presence of the mouth-to-lung coil, which is something that I appreciate every time a vape company does it.

The Innokin Pocketmod is beautifully made. It feels incredibly robust, with all of its parts sturdily attached and designed, and with it being a simple AIO device there are no extra parts that may come loose or become damaged.

I think the performance greatness of the Innokin Pocketmod owes more to the excellent coil options Innokin decided to include in this kit. The two coils worked exceptionally well and for both a satisfying mouth-to-lung and direct lung experience.

Strangely, the Innokin Pocketmod makes a boring four-sided shape, and a monochrome color scheme looks very attractive. Making the mod blend-in and not stand out seemed to be foremost on the designer’s mind, which makes sense if you are looking to make a mod that can be taken everywhere. And, not only was it the right choice, the result is super-sexy, in a subtle, confident way.

There’s nothing not to like about the Innokin Pocketmod. It looks great, it’s a dream to use, and it works better than most similar devices.

I was not expecting a lot from the Innokin Pocketmod. I looked at it before I started my review and thought, “here’s another bro-inspired, lipstick mod for girls that’ll work terribly and be very cheaply made.” But holding the Pocketmod in my hand and using it was a revelation.

The Pocketmod (now that I think about it, there could’ve been more thought put into the name) does not try to impress in any other way than being a first-class mouth-to-lung and direct-lung vape mod. It’s a quality-built, easy-to-use starter kit that’ll perhaps inspire many current smokers to ditch their Zippos and pick up an Innokin Pocketmod.