The Vaporesso Revenger Mini Review: A Vape Friends Will Be Jealous Of

The Vaporesso Revenger Mini is a mod that comes in several colors and is a great purchase for all genders. A starter kit like the Vaporesso Revenger Mini comes with a NRG SE Sub-Ohm Tank, 1 0.5ohm GT CCell Ceramic Coil Head, a 0.15ohm GT 4 Coil Head, a spare glass tube, a micro USB cable, and an instruction manual. It has a crazy high battery capacity of 2500 mAh, and can vaporize at as high as 60 watts, which is impressive for the industry standard. It also has intuitive LED light display featuring a real time clock setting.

The Revenger series has been a boon for Vaporesso, which helped cement their reputation as one of the most innovative, and technologically advanced vape companies out there. So, it only makes sense that they would build upon or extend the life of the brand with a new iteration that mixes some of the old with something new. 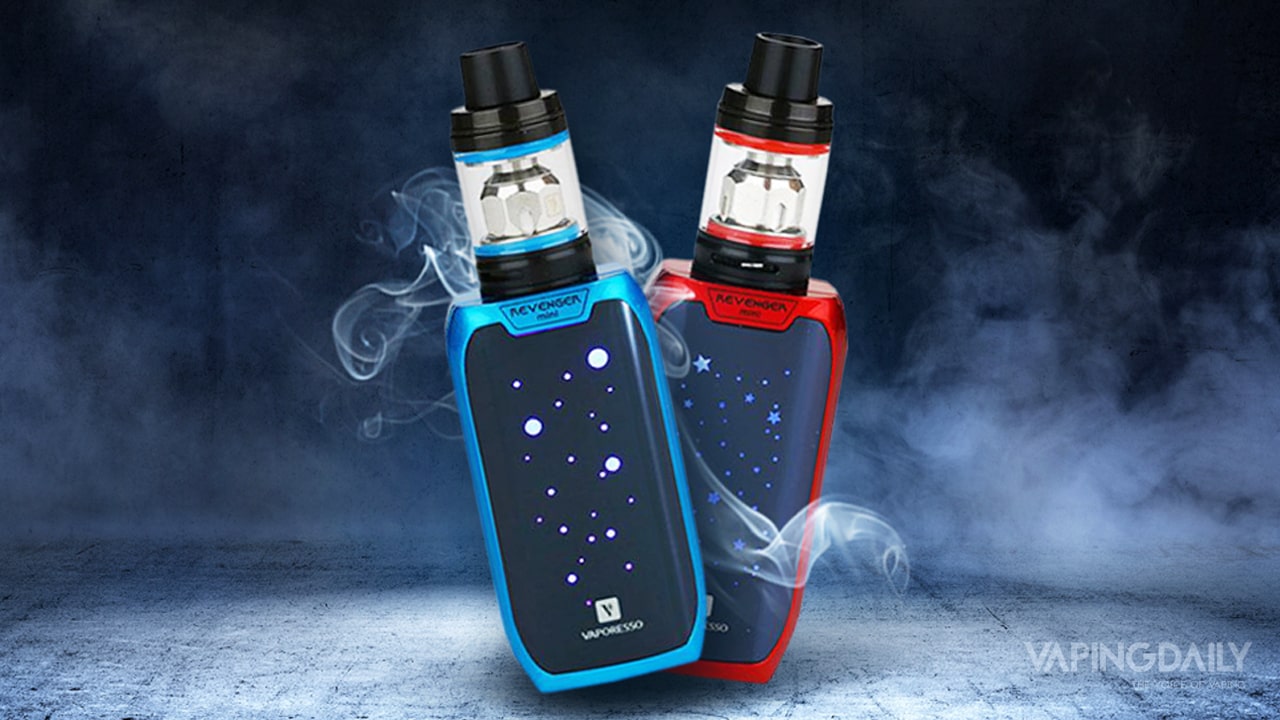 One thing that stayed the same is the presence of the famed Omni chipset inside the Revenger Mini. The Omni enables the mod to perform all that same vaping magic that its older brother, the original Revenger, could; with features like CCW and CCT as well as having three variable voltage modes: hard, normal, and soft.

And something that has changed is obviously, the “Mini” in the title. The Mini is about 15 mm (0.6 inches) shorter and has a more slimmed down figure. The Mini has been pared down to a maximum output of 85W and features a built-in battery rather than two removable 18650 batteries.

The LED light design in the Vaporesso mod has been done with some class and attention to details, rather than just being smacked onto the mod to obfusticate an otherwise poor-performing, and sub-par mod. And this being a special Christmas edition, the LED lights on the back panel light up as a purty, purty Christmas tree.

The other side of the Vaporesso Revenger Mini features a smaller 0.96inch screen that does not have touch buttons on its display. All of the functions on the Revenger Mini are controlled through the four-button operational interface, which is yet another innovation on Vaporesso’s part since they include a separate mode selector button instead of always having to use the fire button. 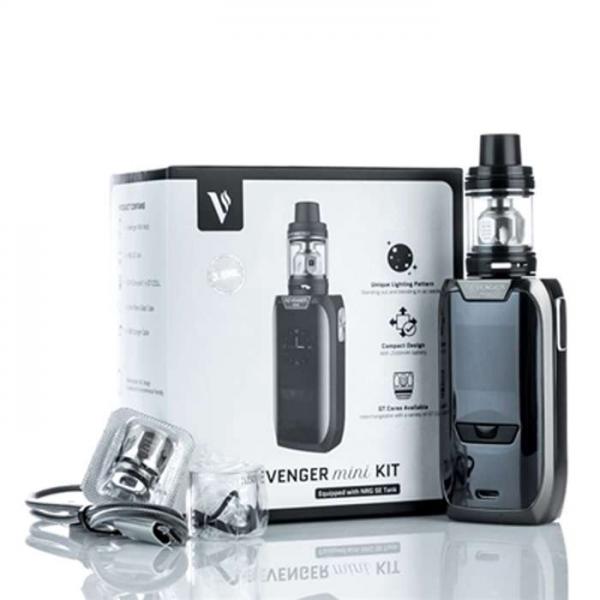 The mode selector button is flanked by the two wattage buttons and sits above the USB charging port. The firing button sits all by its lonesome on the side of the mod, but it is also beautifully finished and integrates itself perfectly into the overall look of the mod.

The Revenger Mini, in general, is just great-looking. It has a slicked-back, glossy shine to it, thanks to its aluminum alloy build.

The Christmas edition has a red outline that frames a green back and front panel. The NRG SE tank also follows the same kind of color scheme with its stainless steel construction blended with red and green accents.

One of the great things about Vaporesso is how technically advanced they make their mods, but still make their interfaces and menus so easy to navigate.

The navigation is made so much easier than other devices thanks to the inclusion of an independent mode selector button. This button not only makes the menus more intuitively easy to follow but also frees up the firing button from working double-duty.

Click the firing button fives times to turn on/off the device. The main menu will read out the basic vaping info, like wattage, power mode, voltage, puff counter, and vaping timer. Hold the mode selector button to get into the separate mode menu, which lists all the available output modes on the Vaporesso Revenger Mini.

Here users will find the output modes they have all come to know and love, like temperature control (for nickel, titanium, and stainless steel), variable wattage mode (that can also be set to high, normal, and soft) CCW (custom curve wattage). This menu is displayed in a numbered, up/down list that thanks to the wattage and mode selector button are a dream to use.

Vaping Experience With the Revenger Mini 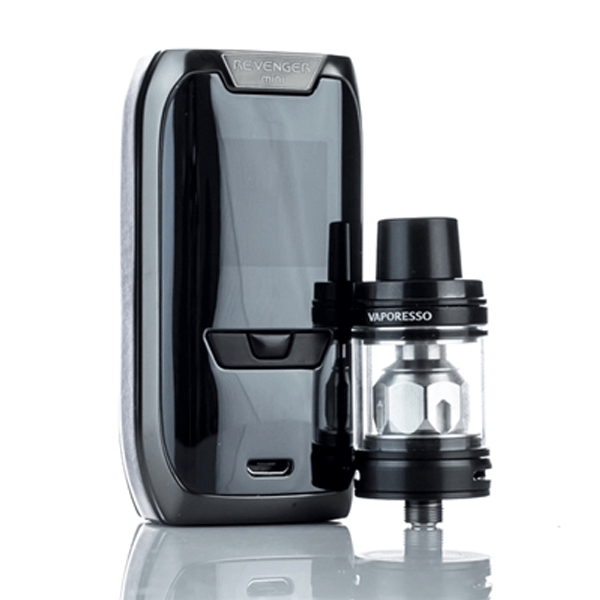 The Vaporesso Revenger Mini kit comes with the NRG SE tank which can used with its another mini-type mod the Vaporesso Swag. Because it is able to reach up to 600 degrees Fahrenheit and 85 watts, it is able to produce large clouds despite its small size. Its large battery capacity helps with this too. The unit has a 3.5 ml e-juice capacity and has an oversized firing button, which makes vaporizing easy– even in the dark. It has a fantastic 510 connection, which is very reliable and widely used in mini mods. The vaping experience using this mini vape is so insane, it is hard to believe that this mini kit comes at such a low price.

SMOK AL85
The SMOK AL85 85W Starter Kit, crafted from SMOKTech, comes in an incredibly impressive amount of color varieties for consumers to choose from. Its cheap price is a great pro of the Smok AL85, but its E-liquid hardly lasts when being used at full wattage, meaning this unit has to be filled frequently for heavy vapers, which is a bit annoying.

WTF Target Mini Vaporizer
The WTF Target Mini vaporizer has some elements that are better than the Vaporesso Revenger Mini, but it comes at a much steeper price, and these small perks are not worth it for most. The WTF Target Mini has a quirky name and comes in five different colors. It is capable of reaching up to 600-degrees Fahrenheit like the Revenger but comes with a much smaller accessory kit.

Vaporesso never fails to impress. The mod’s design and, especially the LED lights were done with that unique Vaporesso touch. Vaporesso always explores new facets of vaping and new ways of improving their devices with an ideal mixture of innovation and thoughtfulness. It is more powerful than some full-sized mods despite its small size, and can produce clouds that will make people’s friends say “wow!”

2 comments on “The Vaporesso Revenger Mini Review: A Vape Friends Will Be Jealous Of” 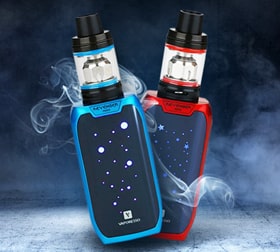